Figure 76.1. Flow chart for the management of paraplegias.

76.2.2 Second Step: Are We Dealing With a Hyperacute, Acute or Subacute Injury?

Hyperacute injuries manifest suddenly and evolve within a couple of minutes or hours. They generally present as a syndrome of complete or almost complete medullary section, i.e., they start as a spinal cord shock with the interruption of motor, sensory and vegetative functions below the level of the injury. This kind of evolution could indicate the possibility of an epidural hematoma or a hematomyelia. Medullary infarction also leads to a sudden deficit, however, as the anterior spinal artery is compromised, it affects the anterior two thirds of the medulla; as a consequence, deep sensibility of the posterior third remains unaffected.

Acute and subacute damage develops over several hours or days. It could result from myelopathies, with the presence of more or less complete medullary syndromes or radicular injuries (classical Guillain-Barré syndrome or its variants) or other acute neuropathies (toxic, acute porphyria, multiorgan failure, etc.). Numbering among acute or subacute medullary injuries are extrinsic compressive injuries (secondary tumour metastases to the spine, epidural or subdural abscesses, etc.); extramedullary or intradural tumours (meningioma, schwannoma) and intramedullary tumours (ependymoma, glioma, etc.) (Table 76.1). Inflammatory-degenerative diseases such as transverse myelitis or Devic’s disease must also be considered.

76.2.3 Third Step: What Topography Does the Injury Have?

Assuming that the patient’s medical history and the neurological test have already told us whether the lesion is medullary or non-medullary, we will now consider some simple elements that can help us to identify the topography.

76.2.4 Fourth Step: What Studies Should Be Carried Out?

If a primary medullary injury is suspected (intramedullary tumour, syringomyelia, demyelination disease, etc.) or secondary medullary injury (compression caused by tumour, epidural hematoma, pyogenic collections, etc.), magnetic resonance imaging (MRI) will be the most preferable study. If there is a suspicion of multiple injuries, MRI is mandatory. It should be borne in mind that computed tomography (CT) with contrast fluid administration can provide rapid screening, with good definition when there is suspicion of multiple tumour metastases to the bone. There is no doubt that due to the notable development of neuroimaging techniques, the diagnosis is based fundamentally on MR in most cases.

If there is suspicion of a flaccid paraplegia of non-medullary origin, electromyography (EMG) and laboratory tests must be used. The typical cerebrospinal fluid (CSF) albuminocytologic dissociation (hyperalbumin with normal cellulose) is found in the Guillain-Barré syndrome. This finding can be present after the first week and only rarely will the CSF remain normal until the tenth week. Figure 76.2 summarizes essential tests, while Figure 76.3 shows some explicative images.

Figure 76.2. Tests that should be performed. 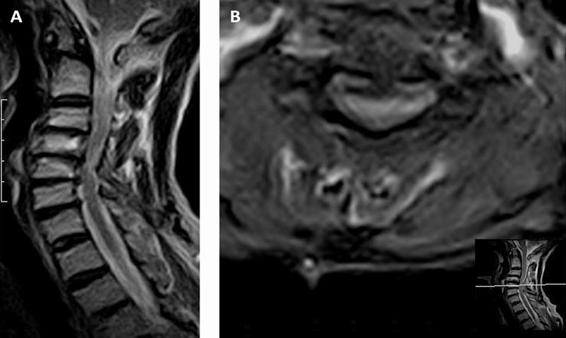 Figure 76.3. A 68-year-old woman with progressive quadriparesis and pyramidal signs. The MR images show the spondyloarthrotic changes and a narrow canal and the secondary myelopathy, with signal changes in medullary area [Images courtesy of the Neuroradiology Department, Sanatorio Pasteur, Catamarca].

Here we present a brief overview of the clinical picture, together with recommended management of the most frequent paraplegias of non-traumatic cause.

The most frequent medullary compression is caused by oncological disease. It can be a pre-existing cancer or one whose onset becomes evident from the metastasis that causes the compression.

It must be taken into account that cancer is not the only cause of medullary compression. There are other less frequent causes such as epidural abscesses, epidural hematoma, lipomatosis, etc.

Due to its frequency and impact, epidural metastasis stands out among other etiologies. It is estimated that at some point between 5% and 10% of all cancers develop metastases in the spine. The most frequent ones are lung cancer, breast cancer, melanoma, lymphoma, prostate and colon cancer. In almost one third of cases, multiple spinal metastases are found and in 70% of cases they are located in the dorsal spine. Lymphomas can be located in the epidural space without bone involvement.

Mechanical compression is not the only factor responsible for signs and symptoms. There is also secondary damage caused by venous obstruction or arterial ischemia. The spinal cord edema can generally be improved with the use of corticoids at a first stage.

Pain is usually the earliest symptom. It can be local, increasing while in bed, or it can also be radicular. When percussion of the spinous process causes precisely located pain, this can lead us to suspect mechanical spinal cord compression.

The onset of paraparesis at a later stage worsens the prognosis. In general it will be a case of acute or subacute paraparesis that will develop pyramidal signs. Motor difficulty can result from impairment of the spinocerebellar tracts, and the symptoms will be clumsiness and ataxia.

Sphincter function is usually affected at a later stage and can be interpreted as sign of poor functional prognosis.

Hypoesthesia and anaesthesia affecting well-defined segments of the body are detected in almost half of patients at diagnosis. Sensory examination must not be omitted, although it is usually an element that has been found to be subjective. It should be taken into consideration that it is a very helpful sign in topographical orientation, without forgetting that the level can be found several levels below that of the injury.

Figure 76.4. An 86-year-old woman with paraplegia caused by metastasis to D1 from lung cancer. Radiotherapy was prescribed. (A) CT scan; (B, C) MRI images. Note the better bone definition with CT and the better definition of medullary changes with MRI [Images courtesy of the Neuroradiology Department, Sanatorio Pasteur, Catamarca]. 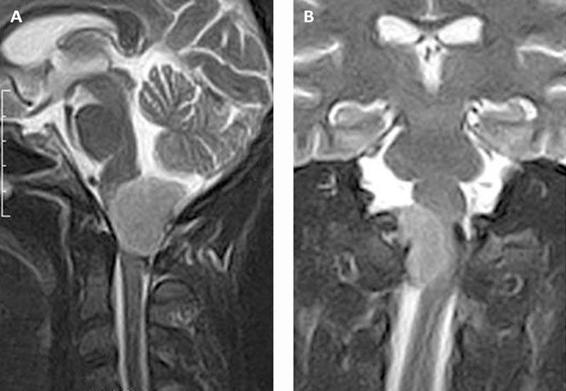 The functional impact at diagnosis is essential for establishing the prognosis. In general terms it can be said that if the patient has had paraplegia for longer than 24 hours, the prognosis is poor. Histology and tumour staging will complete the prognosis. There is some evidence of types II and III but a few of type I to define the therapeutic behaviour.

It is generally recommended that patients experiencing pain without a neurological deficit should be examined as soon as possible. If neurological signs are found, we are dealing with an emergency and such patients must be hospitalized. High-dose endovenous corticoids must be administered, for example in an initial bolus of 96 mg dexamethasone plus another 96 mg/day.

Generally speaking, radiotherapy is the first option in spinal metastasis. It seems that similar results are obtained with decompression laminectomy, though with higher associated morbidity. In such cases, the tumour site must be considered, as well as the existence or not of a defined histology since this is the opportunity for the etiological definition. Figure 76.6 shows an example of clinical findings in these kind of patients. 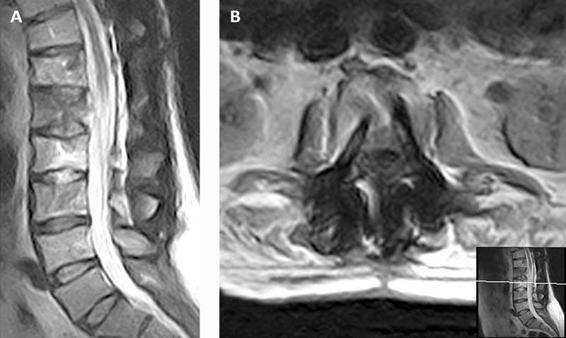 Figure 76.6. A 60-year-old man with lumbar metastasis from prostate cancer. When he consulted, paraplegia had already begun. He was prescribed surgical decompression and stabilization with a titanium prosthesis. The motor deficit was reduced and the patient could walk again. He was later irradiated [Images courtesy of the Neuroradiology Department, Sanatorio Pasteur, Catamarca].

This is a rare and hyperacute cause of paraplegia. The diagnosis can be established on the basis of MR findings. The image will show a bright signal in T1, and occasionally an empty signal in arteriovenous malformation (AVM). Anticoagulant treatment and possible hemorrhagic diatheses must be investigated. If we are uncertain about the cause, an arteriographic study should be obtained. If the patient’s general condition does not improve at diagnosis, urgent surgical decompression is indicated. It is worth remembering that a major epidural circulation is the cause of the more frequent presence of hematomas in this space rather than medullary subdural hematomas.

The hematogenic route can be the result of cutaneous, pulmonary or pelvic infection. It could be an infection caused by continuity from one vertebra to another or the result of an invasive procedure (lumbar or anaesthesia puncture). The most frequent pathogen is Staphylococcus aureus.

The symptoms are a combination of pain, deficit signs and fever. The condition can worsen rapidly and can be injurious, which is why it is advisable to adopt an aggressive approach and operate the patient immediately.

Hematomyelia is less frequent than epidural hematoma and its causes can be the same. Intramedullary AVMs are found more often in the cervical area. Intratumoural bleeding must always be considered.

Injuries in the aorta (dissecting aneurysm, traumatic or surgical injuries) can affect the anterior spinal artery. A hemodynamic shock or an embolic accident can also be the cause of an ischemic event. It usually appears as a medullary section, without pain (except for the pain that an aorta dissecting aneurysm may cause) and with the preservation of deep sensibility. MR may show spinal cord enlargement in T2 with a bright signal in the anterior medullary area. These findings are not consistent; however, this study will serve to exclude other causes of spinal cord injury. In general, this is a case of hyperacute paraplegia. It must be taken into account that transient ischemic medullary attacks can be present as a result of vascular malformations, embolus, temporary increases in venous pressure, etc. In such cases, differential diagnosis will include other causes of transient medullary dysfunction such as narrow canal, demyelination disease, tumours, etc.

Practice shows that acute transverse myelitis is most often idiopathic, and only in one third of cases can an etiological definition be reached. Those caused by infections can be viral (adenovirus, HIV, herpes virus, etc.) or non-viral (luetic vasculitis, tuberculosis, mycoplasma, etc.). Their etiology can be related to post-immunization reactions or collagen diseases or paraneoplastic (bronchogenic carcinoma) processes.

A particular group (<10%) evolves in time towards multiple sclerosis; its frequency is higher among children and young adults and most often arises in the dorsal area. MR can be normal in at least 50% of cases in the acute stage. When it is positive, local edema is perceived with a poorly defined bright signal in T2 and possible highlighting with contrast. Since the onset of multiple sclerosis remains possible, the brain must be examined for other injuries. The CSF can show cellularity and high protein levels. A hyperacute presentation usually carries a poor prognosis. Complete recovery is achieved in one third of cases, partial in another third, and loss of walking ability and sphincter control in the remaining third. Young age, incomplete set of symptoms, maintenance of deep sensibility and a MR with few findings are indicators of a better prognosis.

Devic’s disease differs from multiple sclerosis and can be monophasic or recurrent. Medullary damage is usually acute while optic damage can be acute or subacute and symptoms can appear simultaneously or sequentially. In the recurrent types, medullary onset is usually separated in time from optic symptoms (>3 months). Most relapses occur within a period of 6 months, affecting mainly older adults with an associated autoimmune disease. MR usually shows lesions of more than three spinal cord segments. Hyperintense signals in T2 in the optic nerves, chiasm and spinal cord must be searched for (Figure 76.7). Over the following weeks, treatment with steroid pulses and oral steroids is used. 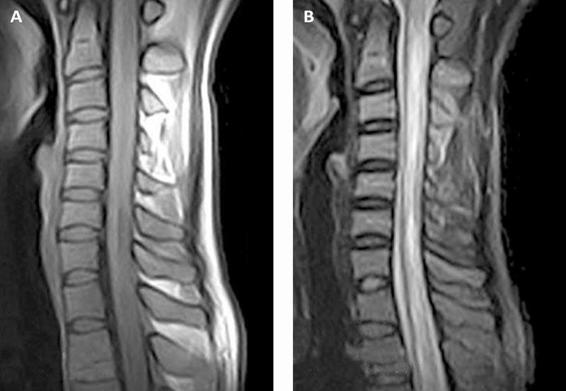 The most frequent intramedullary tumours are astrocytoma (30%) and ependymoma. Glioblastoma, dermoid tumours and oligodendroglioma are much less frequent.

Onset is normally marked by pain followed by motor disorders that usually appear after sensory symptoms. These can be a spinal cord hemisection syndrome (Brown-Séquard) or a syringomyelia syndrome (segment paraesthesia or a level deficit in the upper limbs and dissociated anaesthesia).

MR is the imaging study of choice, though it can lead to wrong conclusions when it shows edema or cystic injuries that can be misinterpreted as necrosis.

The evolution of the patient’s general condition is gradual, subacute, though it can have an acute or hyperacute onset in children.

Tags: Intensive Care in Neurology
Jan 2, 2017 | Posted by admin in NEUROLOGY | Comments Off on Acute Paraplegias and Quadriplegias of Non-traumatic Cause
Premium Wordpress Themes by UFO Themes
WordPress theme by UFO themes