Cranial neuropathy
in leprosy is not rare. There is clinical evidence of cranial nerve involvement in 18 % of patients with leprosy. Leprosy can affect any cranial nerve (2–12th) isolated or in combination with fifth and seventh cranial nerves being the commonest. It is more common in MB form accounting for 10–22 % of cases. Cranial neuropathy occurs at any stage and may be the presenting feature of leprosy (Fig. 9.2). 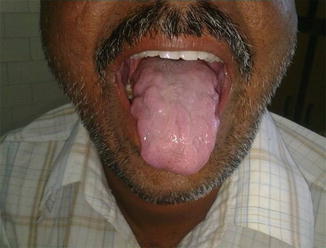 Bilateral involvement of the 12th cranial nerve in a patient with pure neuritic leprosy
Distal neuropathy
affecting exteroceptive sensation, due to a confluent mononeuritis multiplex, and without muscle weakness may be the presentation in leprosy. Symmetrical neuropathies outnumbered mononeuritis multiplex (12 versus 7, respectively) in a series of 19 patients, presenting with proprioceptive loss in leprous neuropathy [10]. More proximal involvement in the form of a spinal cord granuloma has been reported [11]. Sensory nerve damage is accompanied by autonomic involvement.
Neuropathic pain due to small-fiber damage is a well-recognized feature of leprosy neuropathy occurring in 45.8 % of cases. Painful symptoms were also seen in 42.1 % of pure neuritic leprosy (PNL) patients [12]. Rarely leprosy can present with painful neuropathy later in the course of the disease [13].
Pure neuritic leprosy (PNL)
Clinical case series estimate that 4–8 % of all leprosy is limited to the peripheral nerves [14, 15] without skin lesions. The clinical presentation is mononeuritis or mononeuritis multiplex. The clinical features of leprotic nerve involvement include nerve enlargement, tenderness, and pain and sensory (painless burns, ulcers) and motor impairment.
Late onset neuropathy
Relapses occur in the form of late reversal reaction or due to reinfections. Rarely delayed nerve impairment years after MDT occurs, which cannot be explained by relapses or reactions. Presentation may be an acute mononeuropathy or a chronic and slowly progressive multiple mononeuropathy or polyneuropathy. This form is a leprosy late-onset neuropathy (LLON) [16]. Probably it represents an immune reaction due to the persistence of the bacillus antigen.

Complications of leprosy arise as a result of nerve damage leading to deformity and disability which could be physical or functional disability. Claw hand, foot, or wrist drop, lagophthalmos, is the late complications of nerve damage. The other ones are collapsed nose, or perforated nasal septum, ulceration, osteomyelitis, contractures, mutilation, and blindness. This occurs through loss of pain perception leading to trauma, burns, tissue damage, injury, and secondary infection. Progressive disfigurement ensues.
Leprosy related nerve damage is immune mediated and may start before diagnosis, during treatment, or even after completion of treatment. Reversal reactions (type 1 reactions), an important complication of leprosy, are episodes of acute inflammation affecting skin and nerves occurring when a patient develops increased cell-mediated immunity toward M. leprae and moves toward the tuberculoid end of the leprosy spectrum. The histological features of reversal reactions include edema, lymphocytic infiltration, and giant cell formation. The outcome of this cellular activation is the elimination of leprosy bacilli. The acute inflammatory response is seen at the sites of localization of M. leprae (i.e., skin and peripheral nerve), and manifests clinically as inflammatory skin lesions and acute neuritis. These reactions occur either before treatment (some patients initially present for medical attention in the setting of a reaction), during treatment, or months to years after treatment has been completed and may affect 30–50 % of all leprosy patients [17].
Erythema nodosum leprosum
(ENL) (type 2 reaction) is an acute inflammatory condition involving a tumor necrosis factor (TNF)-alfa and immune complex mediated immune response with infiltration of Th2-cells. Nodules and painful, raised red papules are characteristic. Other accompanies are uveitis, iridocyclitis, episcleritis, neuritis, arthritis, dactylitis, lymphadenitis, and orchitis. Fever, prostration, anorexia as well as other symptoms are frequent. Neurological deficits in uncomplicated leprosy evolve slowly in contrast to neuritis during reactions. The nerves affected in the reactional leprosy are the same as in progressive leprosy.

Anesthetic skin lesion(s)
The sensitivity and specificity of anesthetic/hypoesthetic lesion as a diagnostic test varies. High figures for the sensitivity of this test among PB patients were reported from India (93 %) [18], Bangladesh (92 %) [19], and Ethiopia (86 %) [20]. In MB leprosy, 74 % of patients who had skin lesions with normal sensation were smear-positive, thus representing potential source of M. leprae in the community. The clinical implication is, by utilizing anesthesia over the skin patches as the single criterion, almost 30 % of leprosy patients may be missed, most of whom will be smear positive [21].
Thickened peripheral nerve(s)
Nerve thickening in neuritic leprosy ranges from 40 to 75 %. Incidence of thickened nerves in leprosy varies in various reported series. Nonspecific enlargement of a nerve seen in some heavy manual workers may lead to false positive findings [22].
Slit skin smears
Skin smears 100 % specificity. However the sensitivity of this single examination is low, because only about 10–50 % of all patients are smear positive [21].

Biopsy
is the gold standard diagnostic method especially in pure neuritic leprosy and LLON but is not feasible with the major peripheral nerve trunks involved in leprosy. Other limitations of nerve biopsy include: inability to distinguish relapse from reaction in treated PB patients or to differentiate them from other granulomatous diseases like sarcoidosis, tuberculosis, and noninfective foreign body granuloma despite high specificity of histopathology.
Simple histological examinations of nasal mucosa and dermatologically normal skin from hyperesthetic regions may reveal the characteristic changes of leprosy [23–25].
Fine needle aspiration cytology
have been shown to maintain a high diagnostic yield when compared with standard biopsy and with the least side effects [26].
Serology and molecular diagnostic methods
Antiphenolic glycolipid I (PGL-I) antibodies dosage as a diagnostic serological test has been extensively evaluated in the diagnosis of leprosy. The disadvantages of this assay is its low sensitivity especially in PB leprosy [27], inability to diagnose early cases and its low predicting value in identifying who will develop the disease in future [28].
Polymerase chain reaction
are potentially highly sensitive and specific, but since they require a sophisticated laboratory set up, they are not currently applicable in resource poor countries except as a research tool [29].
(ND)-O-Bovine serum antigen
(ND-O-BSA) based ELISA was recently found to be useful in screening of early infection with M. leprae and predicting/monitoring relapse [30]. However, their application in most leprosy endemic countries of the world are limited both due to lack of infrastructure and financial resource.

High resolution sonography
(HRUS) and color Doppler imaging have proven to be useful in the context of leprosy [31–33]. Since the hallmarks of leprosy are nerve enlargement (epineurial and endoneurial thickening) and inflammation, HRUS and color Doppler imaging can be used to demonstrate nerve enlargement and inflammation. HRUS detects extensive nerve damage that clinically suspected.
Magnetic resonance imaging
of nerves is more sensitive than HRUS with good spatial resolution and show involvement of proximal nerves and spinal cord. Both are noninvasive, but MRI is expensive whereas HRUS is least expensive and can be repeated to monitor response to treatment as always.

Several genes have been associated with a susceptibility to leprosy. The results of genome-wide analyses and candidate gene studies suggest an independent genetic control over both susceptibility to leprosy per se and development of clinical subtype. Alleles of the PARK2/PACRG gene [34], as well as other genes [35], are supposed to determine the innate immunity. Variants of genes in the NOD2-mediated signaling pathway (which regulates the innate immune response) were found to be associated with susceptibility to leprosy [36] in patients from China. Cells of monocyte/dendritic cell origin may play a role in the pathogenic mechanisms of this immunity. The cellular immune response appears to be controlled by a number of non-HLA genes [37, 38]. It is difficult to discern the relative contribution of genetic factors following exposure.

9.5.1 Patients Presenting with a Patch of Sensory Loss

Characteristic pattern of sensory loss in leprosy involves patchy area along nerves with loss of sweating/hair and sparing of proprioceptive sensations. Other situations which can mimic this pattern include early radiculopathy and conditions affecting cutaneous nerve twigs and entrapment palsies. In lower limb entrapment neuropathies with cutaneous sensory loss mimicking Hansens’ disease include meralgia paresthetica, genitofemoral nerve at the inguinal region. Enquiry about any precipitating factors for the likely compression of the nerve would help. The clue may be obtained in the occupation.

Other conditions like hereditary sensory neuropathy type I and III, Tangier’s disease, amyloidosis, and some cases of diabetic neuropathy need exclusion. In polyneuropathies, the sensory deficit is classically in glove and stocking pattern. In contrast, affection in leprous neuritis is not truly distal as it affects cooler areas of the body. Cauda equina syndrome and a central cord lesion like syringomyelia may mimic leprous neuropathy.

Thickened nerves are also seen in hereditary sensory motor neuropathy I, Dejerine-Sottas disease, neurofibromatosis, Refsum’s disease, neoplastic infiltration, and chronic inflammatory demyelinating neuropathy. But in these diseases, the nerves are not as large, and hypertrophy is more diffuse than the localized temperature linked pattern in leprosy.
Only gold members can continue reading. Log In or Register to continue