The cervical spine is a complex bony and ligamentous region divided anatomically into the subaxial spine (C3–C7) and the occipitocervical junction (occiput to C2). 1 Deformities that affect the cervical spine include a broad range of etiologies, including spondylosis, inflammatory arthropathy, trauma, infection, iatrogenic, congenital, and neuromuscular pathologies. Kyphosis, the most common cervical deformity, can have an apex within the cervical spine, at the cervicothoracic junction, or extending into the thoracic spine.

A 50-year-old woman is referred to your clinic with a primary complaint of chronic neck pain and complaints of mild decrease in sensation of her hands. She brings with her a cervical MRI obtained by her primary care physician (▶ Fig. 22.1). 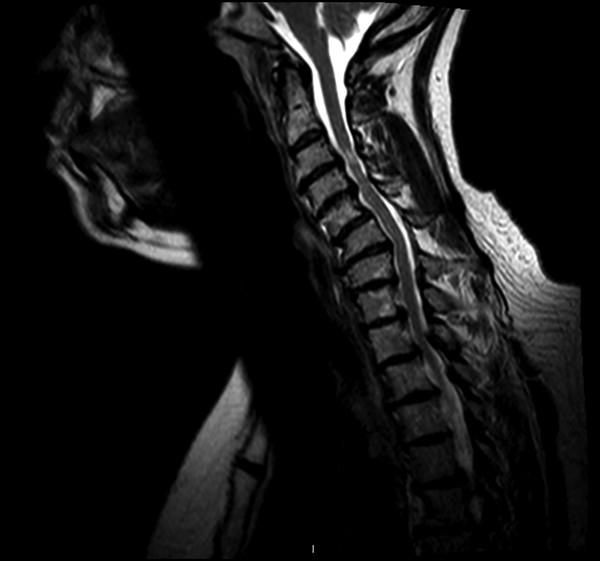 How would you classify her deformity? What are the next steps of your outpatient evaluation? 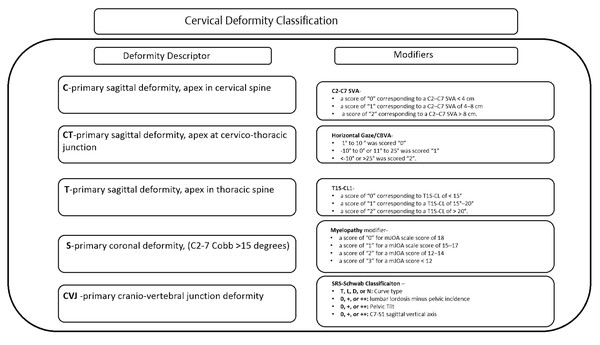 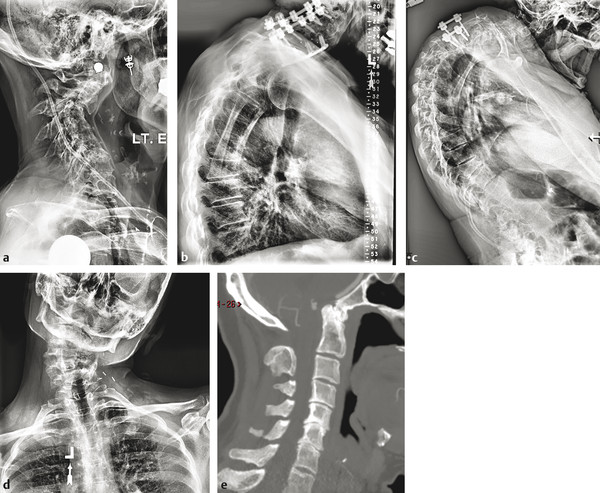 Following determination and designation of the primary deformity descriptor, a number of modifiers are then considered. These modifiers were selected based on available literature and expert opinion as factors that may impact disease morbidity (e.g., pain, disability, and myelopathy) and that may have implications for surgical planning. These modifiers are C2–C7 sagittal vertical axis (SVA), horizontal gaze assessed by the chin–brow vertical angle (CBVA), T1 slope minus C2–C7 lordosis (T1S–CL), myelopathy as assessed by the modified Japanese Orthopedic Association (mJOA) score, and the Scoliosis Research Society (SRS)–Schwab adult thoracolumbar deformity classification.

Global sagittal alignment has recently become appreciated as a significant source of disability, increased pain, and worsened quality of life among patients with spinal deformity. 5,​6,​7 The C2–C7 SVA is a measure of the overall sagittal alignment across the cervical spine. The C2–C7 SVA is assessed on an upright radiograph of the cervical spine’s visualization from at least the C2–C7 vertebral bodies. The measurement reflects the offset of a plumb line dropped from the center of the C2 vertebral body relative to the posterosuperior corner of the C7 vertebral body (▶ Fig. 22.4). Tang et al reported that an increased C2–C7 SVA correlates with worse Neck Disability Index (NDI) scores and that a threshold of 4 cm correlated with moderate to severe disability. 8 In addition, Smith et al reported a significant correlation between C2–C7 SVA and severity of myelopathy based on the mJOA score. 9 Thus, three scores were proposed for the C2–C7 SVA modifier:

The CBVA is a measure of a patient’s horizontal gaze, which has been previously reported to correlate with quality of life and postoperative satisfaction. 10,​11,​12,​13,​14,​15 CBVA is measured as the angle between a line from patient’s chin to brow and a vertical line (▶ Fig. 22.5 and ▶ Fig. 22.6). The CBVA can be measured using a clinical photograph or a radiograph of the skull. Regardless of the imaging modality, it is important for the patient to be standing with their neck in a neutral positon with their hips and knees extended. A limitation of the CBVA that has limited its use is that the necessary anatomic landmarks are often not visualized on classic lateral radiographs. 16 To overcome this limitation, Lafage et al correlated two more readily available measurements: the slope of the line of sight (SLS) and the slope of McGregor’s line (McGS). They found a strong correlation between these two measurements and the CBVA. They concluded that the SLS or McGS could be used as surrogates for the CBVA in routine clinical practice. 16 The SLS is measured as the angle between a line from the inferior margin of the orbit to the top of the external auditory meatus and a horizontal line. McGS is defined as the angle between a line from the posterior margin of the hard palate to the most caudal portion of the occiput and a horizontal line. 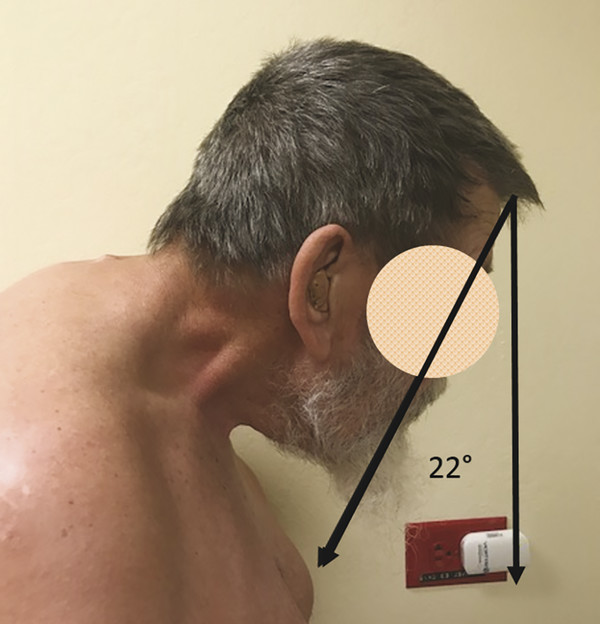 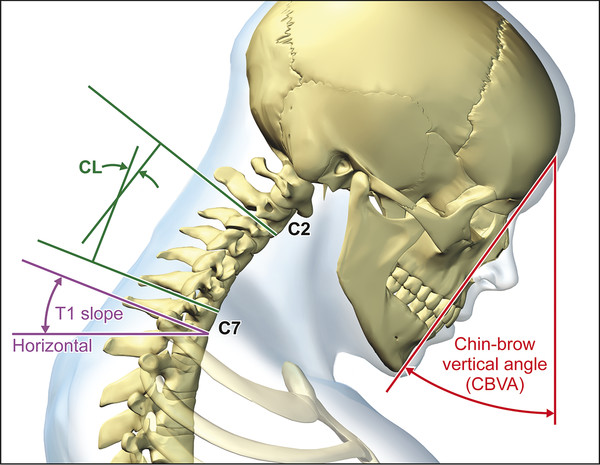 (Reprinted with permission from Xavier Studios.)

Owing to the potential for significant impact of altered horizontal gaze on functional activities, particularly in postsurgical patients with a rigid or fused cervical spine, the CBVA was selected as a modifier for cervical deformity classification. A patient with a fixed negative CBVA (upward gaze) may have increased difficulty with activities requiring downward gaze, such as walking down stairs, due to the increased effort or inability to look downward. Numerous studies have reported an association between a physiologic CBVA and favorable outcomes following surgery for spinal deformity, based on improved gaze, ambulation, and activities of daily living. 10,​11,​12,​13,​14,​15 There are no clearly defined normal value ranges for CBVA; however, Scheer et al reported favorable surgical outcomes if CBVA is greater than -10, with varying opinion on the maximum positive value associated with favorable outcomes (from -10 to + 10 degrees to +10 to +20 degrees). 14 Additionally, Suk et al reported the negative impact of overcorrecting CBVA to greater than -10 degrees. 15 Song et al recently published that in ankylosing spondylitis patients, CBVA of 10 to 20 degrees was optimal. 17 It should be noted that in general patients can better tolerate a downward facing horizontal gaze than a fixed upward gaze (referred to as a “birdwatcher’s gaze”) since the inability to see the ground for safe ambulation and walking down steps can compromise safety. The expert opinion of Ames and colleagues established three scores for the modifier CBVA 2:

Recent work has demonstrated a significant relationship between lumbar lordosis (LL) and pelvic incidence (PI) with respect to global spinal alignment and quality of life. A pragmatic estimate has been proposed that the ideal LL for an individual should be within 10 degrees of that individual’s PI (i.e., LL = PI ± 10 degrees). 7,​18 Thus, a patient with a high PI (more horizontal sacrum) will require more LL than an individual with a low PI (more vertical sacrum).2 A PI–LL mismatch that falls outside of the normal range has been shown to be correlated with significantly worse health-related quality of life (HRQOL) outcome scores in patients with thoracolumbar deformity, including specific measures of pain and disability. 7,​19,​20

In contrast to the progress that has been made in determining normal values for LL, the normal ranges of CL are not well defined, and what is normal CL for an individual is even less well defined. 21 Additionally, whether and to what degree CL correlates with HRQOL remains controversial, as several studies have failed to demonstrate similar significant correlations as those identified for LL. 22,​23,​24 However, loss of CL has been shown to be associated with worsened neck pain in the settings of trauma or postoperative fusion. 25,​26,​27 Furthermore, in myelopathic patients, cervical kyphosis has a negative prognosis with respect to postoperative neurological recovery. 27 Given that cervical kyphosis is the most common cervical deformity, Ames and colleagues selected a parameter reflective of CL as a modifier for their classification system (▶ Fig. 22.6). 2 Similar in principal to the measure and assessment of LL in the context of PI, Lee and colleagues proposed assessment of the CL in relationship with the T1S. 14,​28 Just as the pelvis serves as the base for the lumbar spine and helps set the amount of required LL, the T1 vertebral body is the base of the cervical spine and the slope of the T1 body helps set the harmonious amount of CL required for physiologic positioning of the head. Hyun and colleagues assessed the correlation between T1S–CL and NDI and suggested that CL should be within 22 degrees of T1S. 29 Based on these findings and the rising appreciation of the importance of sagittal alignment, Ames and colleagues included the T1S–CL modifier in the cervical deformity classification system 2:

Cervical deformity, and notably cervical kyphosis, has been associated with the development of cervical myelopathy due to local pressure, stretch, and ischemic changes at the area of deformity (▶ Fig. 22.7). 21,​30,​31,​32,​33,​34,​35 Two cadaveric studies demonstrated the significant rise in intramedullary pressure with increasing cervical kyphosis. 36,​37 Winestone et al demonstrated that performing a posterior decompression was able to reduce the kyphosis-induced increase in intramedullary pressure by 25%. However, when correcting the deformity, the increase in intramedullary pressure was reduced to 0. 37 There is a demonstrated association between kyphosis and the severity of myelopathy, but myelopathy may also occur due to associated degenerative changes such as osteophytes, local discoligamentous changes, and facet hypertrophy. 9 Due to the profound impact myelopathy can have on a patient’s life and that the cervical deformity may be a causative factor, a measure of myelopathy was included in the cervical spinal deformity classification. The mJOA score was selected, since it is the most widely accepted and applied quantitative functional assessment of myelopathy severity. 38 The mJOA assigns a score ranging from 0 to 18, with a lower score associated with more severe myelopathy. Thus, the expert panel devised a categorization system for myelopathy that is consistent with previous publications 39: