Posterior cervical osteotomies are powerful surgical techniques utilized by spine surgeons to treat rigid cervical spinal deformity. Two main types of posterior osteotomy include the Smith-Petersen osteotomy (SPO) and pedicle subtraction osteotomy (PSO). The SPO was originally described by Smith-Petersen in 1945 in the lumbar spine for the treatment of kyphotic deformity. 1 This technique involved bony resection of the posterior elements including the spinous process, lamina, and bilateral facet joints, along with removal of underlying ligamentum flavum and complete bilateral foraminotomies that skeletonize exiting nerve roots. Complete and thorough central and foraminal decompression are essential at the osteotomy site to prevent spinal cord and nerve root compression during osteotomy closure.

In 1958, Urist modified the original SPO technique and performed the first cervical “opening wedge” osteotomy (OWO) at C7 to treat a patient with rigid cervical kyphotic deformity due to ankylosing spondylitis. 2 The OWO differs from the standard SPO by way of an osteoclastic fracture that is created during posterior osteotomy closure and kyphosis correction, in which an “opening wedge” is created anteriorly with lengthening of the anterior spinal column. In 1972, Simmons 3 had reported a series of 11 patients who underwent cervical OWO for correction of rigid cervical kyphotic deformity in the setting of ankylosing spondylitis. He positioned the patient in the sitting position with halo traction to stabilize the head and neck, and the operation was performed under local anesthesia. This allowed real-time monitoring of the patient’s neurological status and immediate detection of potential neurological deficits during osteotomy closure. In 2006, Simmons et al 4 published an updated series of 131 patients undergoing cervical OWO in the sitting position and demonstrated that the sitting position with local anesthesia was safe and allowed for controlled deformity correction.

In contrast, the PSO technique was first introduced by Thomasen in 1985. 5 He describe performing lumbar PSOs in 11 patients with rigid kyphotic deformity due to ankylosing spondylitis. In contrast to SPO, PSO required removal of additional bony elements including the pedicles, a wedge of the vertebral body, and a portion of the lateral and posterior vertebral walls. This technique allowed more angular correction and better fusion due to the lack of an open gap in the anterior column; thus, it is also known as “closing wedge” osteotomy (CWO). In 2007, Tokala et al 6 first reported performing cervical PSO at C7 in series of eight patients with fixed cervicothoracic kyphosis. Several other clinical series of cervical PSO have been reported, 7,​8,​9 including a series of 11 patients from the author’s home institution. In most cases, both the opening and closing wedge cervical osteotomies are performed at C7 due to the relatively wide spinal canal at C7–T1, the mobility of the spinal cord and eighth cervical nerves in this region, the preservation of reasonable hand function in the event of C8 nerve root injury, and the absence of vertebral artery in the C7 transverse process for most patients.

In this chapter, we provide a detailed step-by-step technical guide for performing a cervical OWO at C7, with a discussion of surgical pearls and complication avoidance. The techniques for cervical PSO (CWO) are discussed in detail elsewhere in this book.

Cervical OWO is typically performed for fixed kyphotic cervical deformities often due to ankylosing spondylitis. These patients often have impaired ability to maintain horizontal gaze, dysphagia, and pain and neurological deficits. Traditionally, the opening wedge cervical osteotomy was performed under local anesthesia with the patient awake in the sitting position in a halo vest. This was done partly due to difficulty with intubation for these patients, but another advantage for local anesthesia is the ability to have real-time patient feedback on neurological functions intraoperatively. 2,​3 However, with the advancement in modern anesthesia techniques and intraoperative neuromonitoring, posterior cervical osteotomies can be safely performed with general anesthesia in the prone position in experienced hands. 7,​10

Preoperative imaging study should include dynamic cervical X-rays, scoliosis films, magnetic resonance imaging (MRI), and computed tomography (CT) of the cervical spine. Any compression of neural elements should be noted and decompression should be planned as part of the overall procedure. Any vascular anomaly involving the vertebral artery should be noted. Various cervical radiographic parameters should be measured and the desired amount of correction should be determined. Specifically, the chin–brow vertical angle (CBVA) is the parameter often used to calculate the amount of kyphosis correction needed (▶ Fig. 12.1). 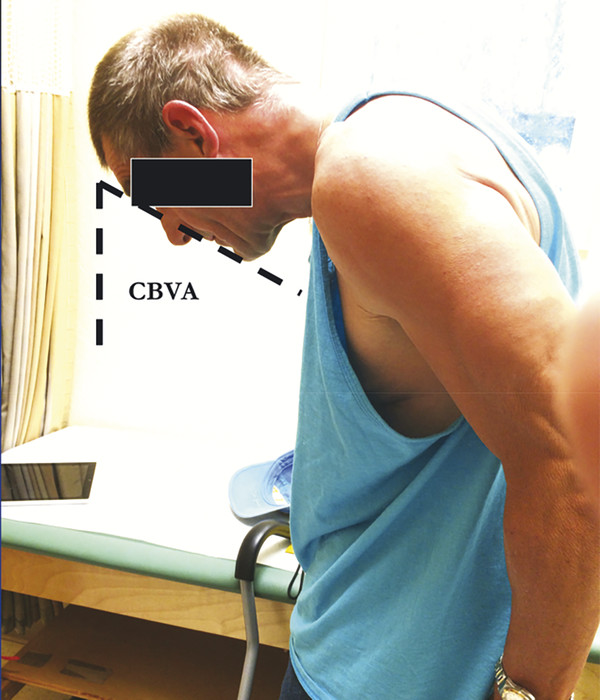 Suk et al 11 recommended a CBVA range of -10 to +10 degrees for optimized horizontal gaze. Another study by Song et al 12 suggested a postoperative CVBA between +10 and +20 degrees (i.e., slight flexion) had best overall results with both indoor and outdoor activities. We prefer a neutral or slight flexion head tilt as it balances appearance and function, which maximizes clinical outcome and patient satisfaction. Overcorrection of cervical kyphosis can impair the patient’s ability to perform activities such as cooking, walking, and toileting, which all require downward line of vision.

The patient is brought into the operating room and undergoes general endotracheal anesthesia. Neuromonitoring and adequate vascular access are established. The open Jackson table is used for positioning, and the head is secured with either a Mayfield head frame or a dual-vector cervical traction system with Gardner-Wells tongs. The patient is then placed prone on a Jackson table with a chest bolster, anterior iliac crest pads, and several pillows for leg support. The head is secured using either Mayfield head clamp (▶ Fig. 12.2) or Gardner-Wells tongs with 15 pounds of weight and dual-vector cervical traction (▶ Fig. 12.3). The operating table is positioned with maximum amount of reverse Trendelenburg to offset the cervicothoracic kyphosis so that the surgical field is more horizontal, and this position also helps to reduce intraoperative blood loss as venous blood volume pools in the legs and the abdomen. 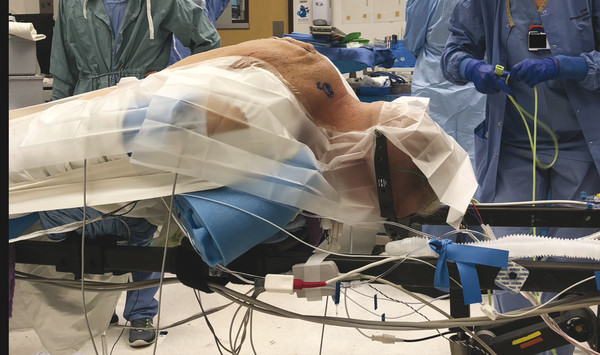 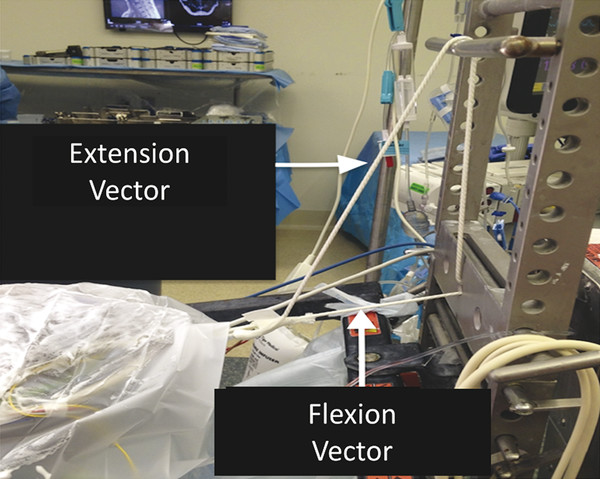