The cervical osteotomy classification system provides a common nomenclature to more effectively and objectively communicate the type of surgical resection(s) performed. It is not intended to provide indications for surgery or to assist in the determination of the appropriate surgical approaches. The system is a 7-point scale based on anatomical resections that are graded according to the potential for destabilization (▶ Table 8.1, ▶ Fig. 8.1). It is designed to be comprehensive as to include the wide range of surgical resections that may be performed for cervical deformity correction.

Fig. 8.1 Illustrations depicting the 7 cervical osteotomy types, which are based on anatomical resections according to progression of destabilization. Used with permission from Xavier Studio.

A Grade 1 osteotomy involves a partial joint resection. It may be performed via an anterior approach that includes a discectomy and partial uncovertebral joint resection, a posterior approach that includes partial resection of the facet joint, or through combinations of both approaches. A Grade 1 osteotomy has limited capacity for deformity correction, but it may be applied over multiple levels to cumulatively facilitate realignment. When performed posteriorly, it offers the potential to promote fusion by removing cartilage from the facet surfaces.

A 51-year-old man presented with signs of cervical myelopathy and left upper extremity weakness and atrophy. Imaging demonstrated a loss of cervical lordosis with multilevel disc degeneration but no evidence of facet ankylosis (▶ Fig. 8.2). He underwent preoperative traction for 48 hours followed by a multilevel anterior cervical discectomy with partial uncovertebral joint resection and interbody fusion at C3–C4, C4–C5, C5–C6, and C6–C7. 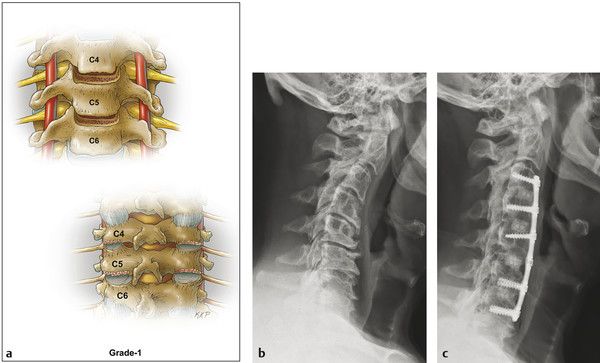 A Grade 2 osteotomy involves resection of both superior and inferior facets at a given segment. Other posterior elements (i.e., the lamina, ligamentum flavum, and spinous process) may be performed as part of a Grade 2 osteotomy, but this grade of resection does not include any portion of the vertebral body. This type of resection is analogous to those commonly performed for deformity correction in the thoracic and lumbar spine, which have several variations and terms, including Smith-Petersen, Ponte, polysegmental, chevron, and extension osteotomies among others. 15,​16,​17 Grade 2 osteotomies are often performed at multiple levels to facilitate a greater magnitude of deformity correction.

A 64-year-old man presented with neck pain and difficulty maintaining horizontal gaze. Imaging demonstrated a loss of cervical lordosis (▶ Fig. 8.3) but no evidence of ankylosis of the anterior disc spaces (not shown). The deformity was considered to be partially reducible. A single-stage operation was performed consisting of posterior instrumentation and fusion from C2 to T10 and posterior column osteotomies with complete facet joint resections from C3–C4 to C7–T1. 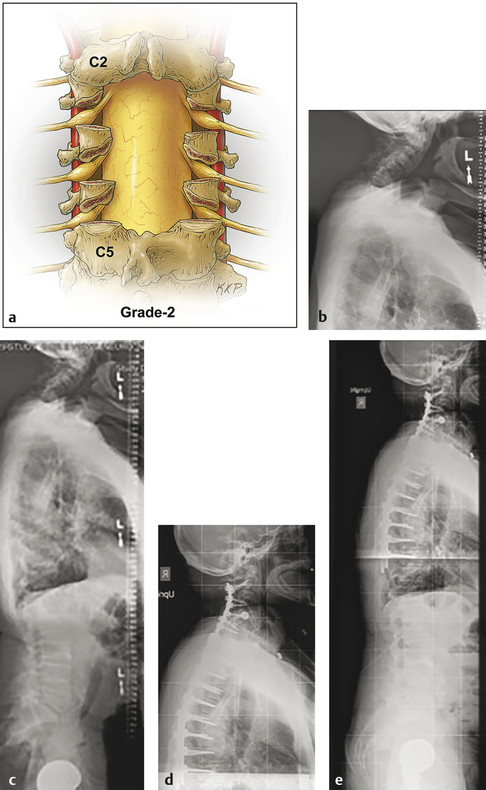 A Grade 3 osteotomy involves partial or complete resection of a vertebral body, including the adjacent discs. In addition to providing anterior release, performing a corpectomy facilitates decompression of the spinal canal and foramina. A structural graft or expandable cage is then inserted into the corpectomy defect to enable restoration of cervical lordosis and provide arthrodesis. A ventral strategy provides an optimal approach for decompression of the spinal cord and enables placement of the interbody graft in a structurally favorable location for correction of the deformity.

An anterior approach (modifier A) is used for Grade 3 osteotomies, but mobility of the posterior column (i.e., facet joints) is necessary to maximize deformity correction. Thus, Grade 3 osteotomies may be performed in combination with posterior release procedures (modifiers AP, PA, APA, or PAP).

A 72-year-old woman presented with neck pain and cervical myelopathy. Imaging demonstrated a Grade 3 spondylolisthesis of C3 in the setting of an autofusion across the disc space at C4 and C5 (▶ Fig. 8.4). A single-stage anterior procedure was performed with corpectomies at C4 and C5 (major osteotomy, Grade 3, modifier A), discectomy at C6–C7 (minor osteotomy, Grade 1, modifier A), placement of a fibular strut allograft between C3 and C6, placement of a bone allograft spacer between C5 and C6, and plating from C3 to C7. 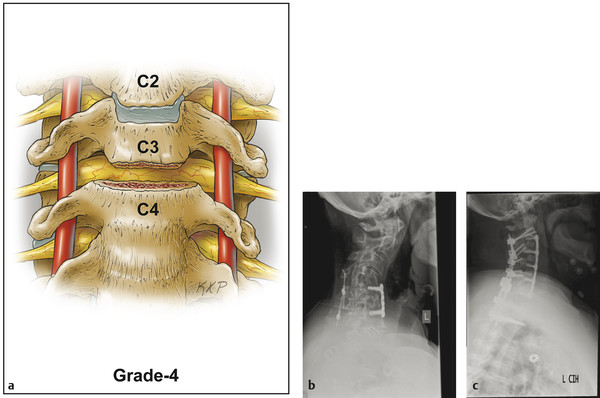