Starting with the early clinical series of Roy-Camille in the 1960s 1,​2,​3,​4,​5,​6 and gaining popularity in the 1980s, pedicle screw fixation has been used in the thoracolumbar spine for mechanical stabilization, deformity correction, and fusion. Thoracolumbar pedicle fixation was initially applied to the treatment of traumatic conditions and extended to degenerative disease, tumor, and spinal deformity afterward. Thoracolumbar pedicle screw fixation is now widely accepted as the main stabilization method for various spinal conditions. 1,​2,​5,​7

Cervical pedicle fixation was first described at C2 for a hangman’s fracture by LeConte in 1964 8 and Borne et al in 1984. 9 However, it was not until the early 1990s that the method was clinically applied to the subaxial cervical spine by Abumi et al. 10,​11,​12

In addition, due to the smaller size of cervical pedicles and foramina, cranial or caudal pedicle wall violation is more likely to cause nerve root injury than in the thoracolumbar spine. As a result of these anatomic complexities, as well as the medicolegal environment in many places and a steep learning curve, many surgeons have shied away from cervical pedicle screw placement and instead performed anterior-posterior combined surgery with traditional lateral mass screws when stronger fixation is warranted.

The first biomechanical study on cervical pedicle screws was performed by Kotani et al in 1994. 19 They found that transpedicular cervical fixation provides greater stability than conventional anterior and/or posterior wiring fixation in multilevel constructs under axial, torsional, and flexion loading in a calf cadaveric model.

These biomechanical reports are limited in that they are cadaveric studies that do not consider dynamic stabilizing factors. However, with its three-column fixation, cervical pedicle screw does appear to provide greater stability than lateral mass screws and may therefore be justified in patients with poor bone quality or highly unstable conditions that require more rigid fixation than the usual clinical settings.

In 1991, Panjabi et al described in detail the anatomical dimensions of the subaxial cervical spine, including pedicle width, height, cross-sectional area, and medial and sagittal angles. 33 Since then, several other studies have attempted to quantify the dimensions and angulations of cervical pedicles using cadavers or computed tomography (CT) images. Common findings from these studies are as follows:

Despite these general principles, it is essential to examine and measure the cervical pedicles on preoperative imaging given the extensive variability in individual spines.

Rao et al reported the mean width and height at all subaxial levels were sufficiently large to accommodate standard 3.5-mm pedicle screws in 98% of the young, healthy volunteers enrolled in a normative CT study. 38 Pedicle widths smaller than 4 mm were rare exceptions (1.7% of the pedicles) and generally observed in women. In general, cervical pedicle screw fixation is not recommended in young children, 40 unless preoperative imaging shows sufficient size of their pedicles for appropriate fixation.

Another important anatomic characteristic of the cervical pedicles is in their 3D structure. 36,​40,​41 They have an elliptical to triangular cross-sectional shape, with a medial wall that is 1.4 to 3.6 times thicker than the lateral wall, similar to the thoracolumbar spine. This is yet another reason that lateral wall violation is more likely than medial wall violation for cervical pedicle screws and may predispose to vertebral artery injury.

Many researchers have published various cervical screw entry points in the literature. In 1994, Jeanneret et al recommended an “entry point 3 mm beneath the facet joint on the vertical line in the middle of the articular mass’” with an average 45-degree medial angle 35 . Common recommendations from the subsequent studies are as follows:

Perhaps most importantly, like pedicle screw trajectory, length, and diameter, the entry point should be individualized to local anatomy and measurements on preoperative images.

Anatomical studies show that, unlike lumbar nerve roots, cervical nerve roots pass through the foramina closer to the inferior than superior pedicle in the sagittal plane. 44 In the coronal plane, the nerve root exit angle is largest at C3 (where it is approximately 90 degrees) and gradually decreases to C6 and C7. 44 The cervical nerve root overlies the intervertebral disc level at C4–C5 and traverses the proximal part of the intervertebral disc at the C5–C6 and C6–C7 levels. These findings imply that superior pedicle wall violation is more likely than inferior wall violation to produce nerve root symptoms in the cervical spine. 45

In their initial article, 10 Abumi et al described the cervical pedicle screw entry point as “slightly lateral to the center of the articular mass and close to the posterior margin of the superior articular surface,” with a medial angulation of 30 to 40 degrees. For safe insertion of pedicle screws, they made their entry point with a high-speed burr, 3 to 4 mm in diameter. This allowed them to bury their screw anchor heads, and also to visualize the entrance of the pedicle with a “funnel” technique, similar to that described in thoracic pedicle screw placement. They used fluoroscopy to confirm the sagittal location of the entry point and trajectory angle.

Several modifications of cervical screw placement technique have been reported since 2012, 46,​47,​48 and mirror the development of new cervical implant technologies. For example, Lee et al described a “key slot” technique which is a modified entry hole that creates a slot in the coronal plane and a triangular shape in the axial plane based on the pedicle medial angle. This technique may avoid the bony defect produced by the Abumi’s “funnel” and fits better with modern polyaxial screw heads. 46

To check for vertebral artery abnormal course and dominance, we obtain vascular-enhanced CT scans on all patients prior to cervical pedicle fixation surgery. We also use these preoperative CT scans to measure the convergence angle and the minimum diameter of the pedicle in the axial plane at each instrumented cervical vertebra (▶ Fig. 13.1). We select the length of the screw so that it passes into the anterior one-third of the vertebral body on preoperative imaging. If patients have a pedicle diameter less than 3.5 mm or a pedicle convergence angle greater than 50 degrees, we do not perform cervical pedicle screw fixation at these levels. 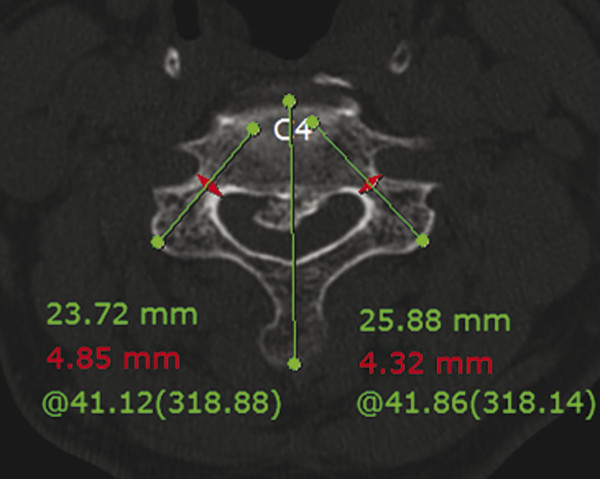 To find the correct trajectory, we target the virtual pedicle entry point, which is on the line perpendicular to the pedicle’s axis (▶ Fig. 13.2a). We begin by creating a key slot–shaped entry on the medial half of the lateral mass with a 3-mm matchstick burr. The key-slot entry shape is a rectangle in the coronal plane (▶ Fig. 13.2b) and a right-angled triangle in the axial plane (▶ Fig. 13.2c). The apex of the triangle is the virtual pedicle inlet, and the oblique side of the triangle is the pedicle’s axis (▶ Fig. 13.2a, c). In the sagittal plane, the depth of the drilled entry point is two-thirds of the lateral mass thickness (▶ Fig. 13.2d).

The exact width, depth, and angle of the slot are adjusted according to the individual anatomy of the cervical vertebra on preoperative CT images. When a surgeon is first learning to place cervical pedicle screws, he or she may confirm the location of the entry point and screw trajectory in the sagittal plane with lateral fluoroscopy. With practice and experience, cervical pedicle screw placement is possible without fluoroscopic guidance.

After drilling the key slot–shaped entry, we gently probe the pedicle as close to the medial wall as possible with a 15-degree curved awl. After probing to an approximate 2-cm depth, we confirm the lack of pedicle breach using a ball-tip probe. If we detect a pedicle breach, we change the screw trajectory or skip this level. After confirming there is no pedicle breach, we sequentially drill, tap, and insert the screw in the usual fashion. 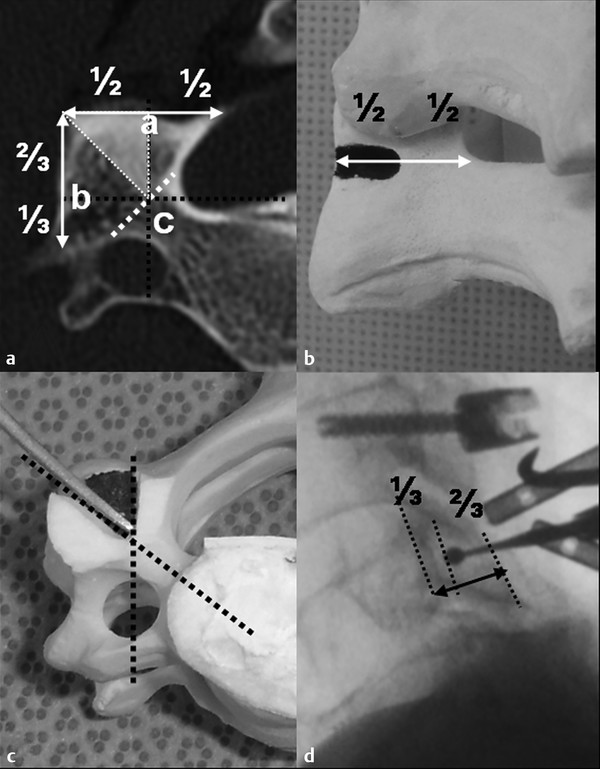 Fig. 13.2 Cutting burr (3 mm). The entry shape is a rectangle in the coronal plane (a) and a right-angled triangle in the axial plane (b). The apex of the triangle is the virtual pedicle inlet and the oblique side is the pedicle’s axis (c). In the sagittal plane, the drilled entry depth is two-thirds of the lateral mass thickness, as seen on fluoroscopy (d). 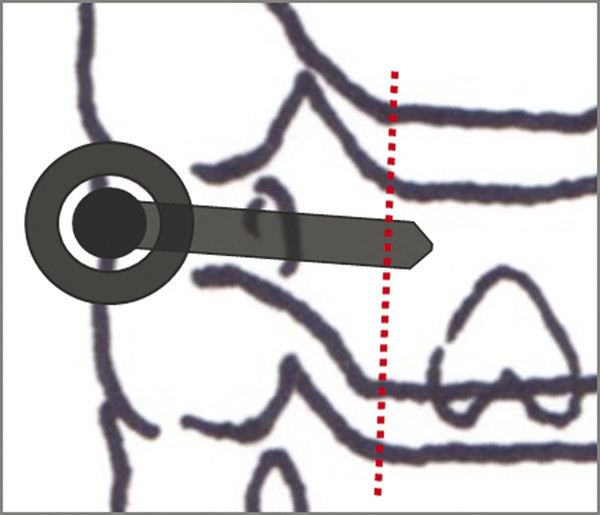 The foraminotomy is a simple method to visualize the medial pedicle wall and is helpful for cervical pedicle screw fixation in C7 or T1. It is also possible to perform foraminotomies for pedicle screw placement in the midcervical spine. However, it may take more operative time, requiring greater bony removal and higher blood loss, from C3 to C5 because these levels have greater pedicle medial angles and lateral mass anterior-posterior dimensions than the C6–C7 level. 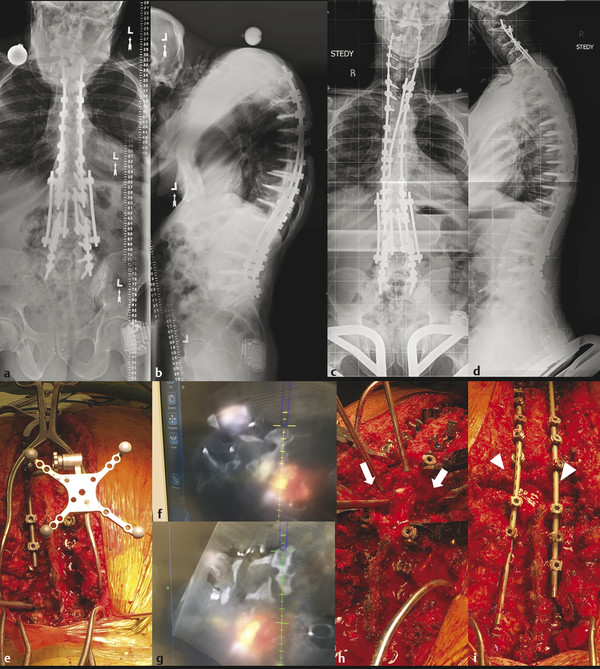 Fig. 13.4 Preoperative (a,b) radiographs of a 61-year-old male patient with a history of multiple thoracolumbar deformity surgeries and proximal junctional kyphosis at T3. A posterior vertebral column resection (PVCR) was performed at T3 with extension of fusion up to C2. Postoperative radiographs show significant improvement of sagittal balance (c,d). Cervical pedicle screws were inserted for cervical spine fixation using the O-arm and Stealth navigation-assisted technique (e-g). (h,i) The bony gap after T3 PVCR (arrows in h) was closed after reduction and rod assembly (arrowheads in i).

The use of templates based on a patient’s individual anatomy have been developed to avoid the high financial and time cost of navigation equipment, the learning curve of using navigation technology, and the additional radiation exposure for the patient. Initial efforts in the 2000s used a custom-made guiding device or CT film template, but more recently in the 2010s, 3D remodeling software and printing systems have been applied to cervical pedicle screw placement. 64,​65,​66,​67 Clinical case series show good accuracy of templates comparable to those of surface landmark–guided or navigation-guided cervical pedicle screw placement.

The accuracy of cervical pedicle screw placement has been extensively assessed by numerous authors. However, it is not easy to compare results between series as they often use variable diagnostic criteria for pedicle breaches (▶ Table 13.1). In Abumi’s first case series, the authors found 3 cortical breaches out of 52 screws (5.8%), based on postoperative CT scans. 10 Consecutive studies from the same authors report pedicle breach rates ranging from 4.7 to 6.9%.

In this section, we present several broad categories of clinical applications for cervical pedicle screw fixation. Indications can be expanded depending on the individual patient’s bone quality, fusion levels, and local anatomy.