Chorea consists of involuntary, continuous, abrupt, rapid, brief, unsustained, irregular movements that flow randomly from one body part to another.

Ballism is a form of chorea characterized by forceful, flinging, high-amplitude, coarse movements; ballism and chorea are often interrelated and may occur in the same patient.

Athetosis is a slow form of chorea and consists of writhing movements resembling dystonia. However, unlike in dystonia, the movements are not sustained, patterned, or painful.

Other related disorders that can be confused with chorea, athetosis, or ballism are the following:

Akathisia: a feeling of inner restlessness and anxiety associated with an inability to sit or stand still.

Restless legs syndrome: a symptom complex of discomfort or unusual sensation in the legs (or arms) that is characteristically relieved by movement of the affected limb(s).

Parakinesia is the act of “camouflaging” some of the choreiform movements by incorporating them into semipurposeful activities.

The examiner must differentiate chorea from pseudochoreoathetosis (chorea or athetosis secondary to a defect of proprioception).

Chorea may be a manifestation of a primary neurologic disorder (eg, Huntington’s disease) or may be secondary to a systemic, toxic, or metabolic disorder. 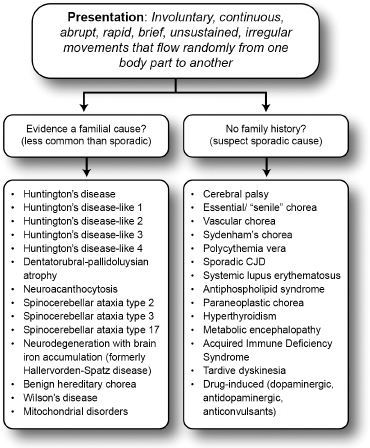 Huntington’s disease (HD) is an autosomal dominant neurodegenerative disorder (each child of an affected parent has a 50% chance of developing the disease) caused by an abnormal expansion of the IT15 gene on chromosome 4, which encodes the protein huntington. This protein is ubiquitously expressed in persons with Huntington’s disease, but its function is still poorly understood.2

Most people develop HD between 30 and 54 years of age, but HD can manifest in individuals as young as 4 years or as old as 80 years of age.

There is a triad of motor, cognitive, and psychiatric symptoms.

Motor symptoms: impairment related to involuntary (chorea) and voluntary movements, reduced manual dexterity, dysarthria, dysphagia, gait instability, and falls are common; parkinsonism and dystonia can be seen in patients with an earlier onset of disease.

–    In the treatment of chorea, nondrug interventions should be considered first as patients are often not bothered by mild chorea and exhibit no functional impairment related to choreiform movements.

–    Pharmacologic treatment for chorea may worsen other aspects of movement, cognition, or mood.

–    Chorea may diminish over time, so that the need for treatment is reduced.

–    Always ask about suicidality, particularly given that impulsivity is common.

–    Always disclose the results of genetic testing in person and with a relative, caregiver, or friend of the patient present.

Inherited “paroxysmal” disorders that can include choreiform movement (see Table 6.3 for clinical overview)11

Try to keep the environment as calm as possible.

Redirect the patient away from the source of anger.

Respond diplomatically, acknowledging the patient’s irritability as a symptom of frustration.

Essential chorea is adult-onset, nonprogressive chorea in a patient without a family history or other symptoms suggestive of HD and without evidence of striatal atrophy. “Senile chorea” is essential chorea with onset after age 60 without dementia or psychiatric disturbance.

Sydenham disease (St. Vitus’ dance, the eponym sometimes used by patients) is related to infection with group A streptococci, and the chorea may be delayed for 6 months or longer. The distribution is often asymmetric. The chorea can be accompanied by arthritis, carditis, irritability, emotional lability, obsessive–compulsive disorder, or anxiety. Serologic testing reveals elevated titers of anti-streptolysin O (ASO).

Chorea gravidarum is often associated with a recurrence of systemic lupus erythematosus or with a prior history of Sydenham chorea but can also be associated with other metabolic or systemic disturbances.