Congenital scoliosis is classically described as a failure of segmentation, formation, or a mixed form. 3 Approximately 80% of anomalies may be classified as either failures of segmentation or formation, with 20% being a mixed form. Segmentation defects involve bony bars between adjacent segments. 4 A block vertebra results from bilateral segmentation defects with fusion of the disc spaces between the involved vertebrae. A unilateral bar typically occurs on the concave side of a curve. A unilateral unsegmented bar is a bony bar fusing both the disc spaces and/or facets on one side of the spine. The unsegmented bar does not contain growth plates and therefore does not grow.

Determining which congenital curves will progress rapidly is difficult. In general terms, 25% of curves do not progress, 25% progress slowly, and 50% display rapid progression. 8 The determinants of curve progression depend on the type of anomaly, its location, and the age of the patient. Normal longitudinal growth of the spine is a summation of the growth occurring at the superior and inferior endplates of the vertebral bodies. The presence and quality of the disc spaces surrounding an anomalous vertebral segment will predict the potential for asymmetric growth, as healthy discs typically portend curve progression. Fully segmented hemivertebrae have a higher potential for progression, as definable intervertebral discs signify the presence of growth potential. 3

McMaster and Ohtsuka 3 reported on the rate of worsening in patients with various types of congenital spine anomalies. The anomaly that is the most at risk for progression is the unilateral bar with contralateral hemivertebra, followed by a unilateral bar, a hemivertebra, a wedge vertebra, and a block vertebra, which is the least likely to cause any significant deformity. A “hemimetameric shift” occurs when a hemivertebra on one side is balanced by another on the opposite side of the spine, separated by one normal vertebra. This is most commonly found in the thoracic spine. Intuitively, it would appear that the asymmetric growth potential should balance in this circumstance. However, these deformities still progress in up to 30% of patients. 9 With regard to patient age, curve progression is typically most rapid before age 5 and during the adolescent growth spurt. 10 Curves in the thoracolumbar spine appear to progress more rapidly than those in the upper thoracic and cervical spine. 5

Unlike in the thoracolumbar spine, there is less possibility for compensation above a cervical deformity. Furthermore, a cervical hemivertebra is often associated with other malformations such as Klippel–Feil syndrome, which further reduces the number of flexible segments available to allow for any significant compensation. 11 This often results in an increasing head tilt. This resultant torticollis and shoulder imbalance are two particular cosmetic abnormalities of congenital cervical anomalies. 12 If the deformity is significant enough, the head tilt can lead to soft-tissue contractures of the neck musculature and outward facial asymmetry. 13 In an attempt to achieve a more horizontal gaze, the patient may develop a compensatory curve in the upper thoracic spine, or a considerable trunk shift to the side of the cervical convexity if additional congenital anomalies are present in the thoracic spine. 11,​14 At times, a child will compensate for a primary cervical deformity with a long thoracolumbar deformity. If treatment of the cervical deformity is not undertaken in a timely manner, then the thoracolumbar deformity may become fixed (▶ Fig. 16.1a, c, d). 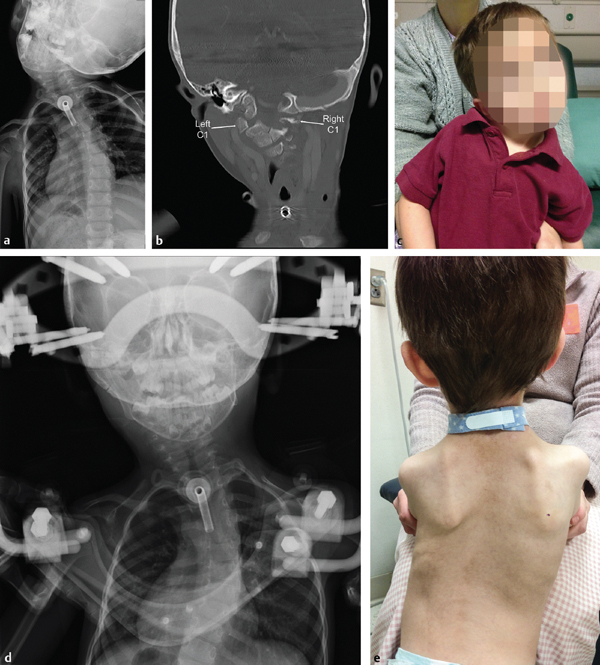 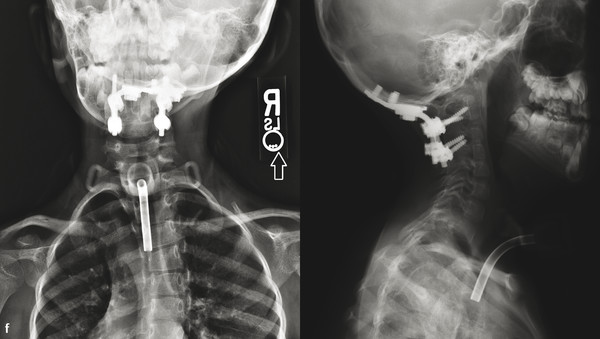 The spine develops between 4 and 6 weeks of gestation along with the genitourinary, musculoskeletal, and cardiovascular systems. Therefore, many patients with congenital scoliosis also manifest abnormalities in other organ systems. These anomalies may be isolated or in association with the VACTERL syndrome (vertebral anomalies, anorectal atresia, cardiac anomalies, tracheoesophageal fistula, renal and limb anomalies). 15 The musculoskeletal system should be examined closely for other anomalies in the cervical spine (Klippel–Feil syndrome), upper extremity (Sprengel’s deformity or radial deficiency), and/or lower extremity (developmental dysplasia of the hip).

Genitourinary abnormalities are observed in 20 to 40% of these children. These are usually anatomic abnormalities with normal renal function. However, a renal ultrasound or evaluation of the kidneys on the spine MRI is recommended for all of these patients. 16 Cardiac abnormalities occurred in 18 to 26% of patients in one series of congenital scoliosis. 17 Ventricular septal defects tend to be the most common finding. Prior to any surgical intervention, an echocardiogram with an evaluation should be performed by a cardiologist if indicated. 5 Neural axis abnormalities occur in up to 40% of patients with congenital scoliosis. 15

Clinical indicators of intraspinal anomalies can include skin stigmata such as hairy patch or skin dimple 19 or asymmetric abdominal reflexes. Neurosurgical intervention is recommended for any anomaly which tethers the cord prior to attempting surgical correction of the deformity. An MRI examination of the entire spine from occiput to sacrum is recommended prior to any surgical intervention. 17

Klippel–Feil syndrome is described as a triad of congenital fusion of two or more cervical vertebrae, a short neck, and low hairline. The presence of Klippel–Feil syndrome is unknown, as the majority of individuals who have this condition are typically asymptomatic. Brown et al 20 reported an overall prevalence of 0.71% of congenital cervical fusions present in a study of 1,400 skeletal cervical spine specimens. Of these specimens, approximately 75% of the congenital fusions were noted in the first three cervical vertebrae (fusion of C2–C3 was the most common). The majority of these patients had three or fewer cervical segments fused overall. Hensinger et al 21 developed a classification system to describe the location and extent of cervical fusions in this patient population. Type I demonstrates a fusion of the second and third cervical vertebrae with occipitalization of the atlas; type II is a long fusion with an abnormal occipitocervical junction; and type III demonstrates two block fusion segments with a single open interspace. Type III was postulated to have the worst prognosis, given the potential for overuse of a single mobile disc space between two long lever arms. However, long-term data from other studies have not shown an increase in neurologic problems in these patients. 22 Pizzutillo et al 23 reported that patients with hypermobility of the upper cervical spine were at an increased risk for neurologic problems, whereas those with involvement of the lower cervical spine were at an increased risk for early degenerative disease.

Larsen syndrome is a connective tissue disorder caused by mutations of the Filamin B gene. Clinical presentations typically include multiple joint dislocations, clubfoot, heart defects, and neonatal tracheomalacia. 24 Patients with Larsen syndrome commonly demonstrate cervical spine deformities, most notably progressive kyphosis, that has been reported to cause paralysis and death. 25 Cervical spine imaging is mandatory after diagnosis of Larsen syndrome to evaluate for any abnormalities and/or instability (▶ Fig. 16.2a–c). 26 Circumferential decompression and fusion is required in the presence of myelopathy with cord compression. 27 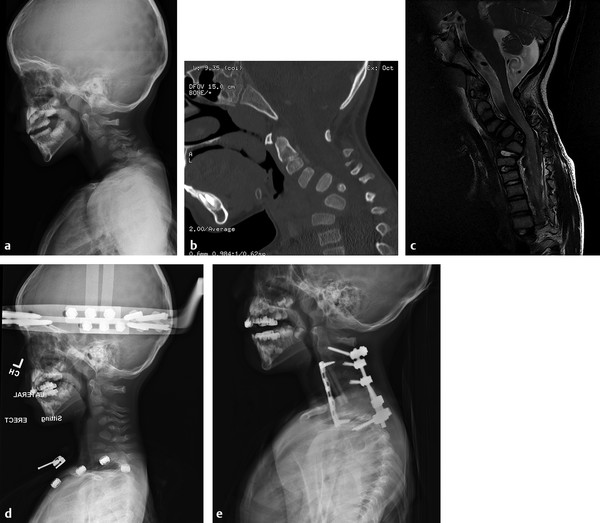