Although there have been a myriad of advances in adult spinal deformity techniques and instrumentation over the past decade, junctional failure at the proximal and distal segments of a long construct continues to pose a challenge to even the most experienced deformity surgeon. It is well known that proximal junctional kyphosis (PJK) and proximal junctional failure can occur in 5 to 46% of patients, and recent studies have sought to elucidate risk factors for this significant complication, as well as efficacy of various preventive strategies. 1,​2,​3,​4,​5,​6,​7 Historically, distal junctional kyphosis (DJK) has been a concern in long cervicothoracic fusions for Scheuermann’s kyphosis and ankylosing spondylitis. 8,​9,​10,​11 Recent work has demonstrated, however, the prevalence of this complication in cervical spinal deformity, as well as its impact on long-term postoperative clinical and radiographic outcomes. 12,​13

DJK is a complication that was first described in a series of patients who had undergone thoracic fusion for Scheuermann’s kyphosis. 12,​13 Patients with a history of a previous thoracic or thoracolumbar fusion may develop symptomatic degeneration of the segments caudal to the fusion. Radiographic breakdown of levels caudal to the long fusion may manifest as kyphosis, stenosis, or olisthesis. Distal junctional degeneration may be acute, seen within the first 6 months to 1 year after surgery, or may develop gradually over time. The incidence can range from 0 to 28% in the setting of Scheuermann’s kyphosis and other etiologies of thoracic hyperkyphosis including posttraumatic and postlaminectomy, and patients may require revision surgery for realignment of the deformity, and extension of fusion with osteotomy or wide decompression. 8,​14

Efforts to understand this complication have focused on selection of vertebral levels for fusion, reduction techniques, instrumentation, and patient-related factors. 8,​15,​16 It is critical that surgeons have an understanding of the diagnosis and prevention of this complication, as it has the potential for neurologic deficit, and can entail complex revision reconstruction. In this regard, this chapter will seek to deal with the historical context and prevalence of this complication in cervical deformity surgery, strategies for prevention, and approaches for unanticipated revision surgery.

In 1920, Dr. Holger Scheuermann first described Scheuermann’s kyphosis, noting it to be a thoracic hyperkyphosis in adolescents, with associated abnormalities of the vertebrae including a wedge shape, endplate irregularities, Schmorl nodes, and decreased disc spaces. 17 While bracing can be an effective nonsurgical option in terms of pain control, it is known that fusion is indicated for curves greater than 60 degrees, rapid curve progression, excessive pain or discomfort, or neurologic compromise from the kyphosis or a herniated thoracic disc. 18,​19,​20,​21 In 1980, Bradford et al published results in a series of 24 patients who underwent deformity correction through an anterior/posterior approach. 10 Though there was significant improvement of pain and global alignment after surgery, 5 of the 24 patients developed a progressive kyphotic deformity distal to the fusion requiring extension of fusion. 10 In retrospection, the authors emphasized the importance of extending the fusion to include the end vertebrae of the kyphotic deformity, or the vertebra tilted maximally into the concavity of the curve. 10

In 1990, Reinhardt and Bassett expanded on this concept in a series of 14 patients who underwent anterior/posterior fusion for Scheuermann’s kyphosis. 11 In this series, 5 of the 14 patients developed DJK with progressive deformity. 11 Interestingly, only two patients had undergone fusion stopping short of the end vertebrae, whereas the other three had fusions incorporating the end vertebrae, although the end vertebrae demonstrated wedging greater than 5 degrees. None of the patients who developed DJK required revision surgery at the time of publication. 11

Broadly, DJK is a term used to refer to an abnormal kyphotic deformity at the lower instrumented vertebra (LIV). 22,​23 DJK can occur through the bony vertebrae caudal to the construct, or through the caudal disc spaces. It is generally accepted that junctional pathology, which includes proximal junctional kyphosis (PJK), DJK, and adjacent segment disease with resulting stenosis, results from the differential stiffness between native bone and soft tissues, and instrumentation. 24,​25,​26To date, there are no studies with a specific definition of DJK in terms of degrees of kyphosis or time point of occurrence. The only study to date examining the incidence of DJK is in the pediatric scoliosis population at 2-year follow-up; a 6.8% incidence of DJK was found. 27

Though clear evidence of risk factors for DJK is lacking, suggested mechanisms and modes of DJK have been described. A well-known complication of Harrington rod instrumentation is flat back syndrome, or progressive loss or physiologic lumbar lordosis, and loss of disc height due to degeneration. 28 This can be associated with spinal stenosis and development of coronal malalignment and exacerbation of a fractional lumbosacral curve. Kyphotic deformity of the unfused segments distal to the construct may occur in this setting. Kyphosis or wedging of the disc caudal to instrumentation is an indication of DJK, and can occur when the fusion does not extend to the first stable vertebra, or incorporate the first lordotic disc space. Fractures of the inferior endplate of the LIV and pedicle screw ploughing can lead to a segmental kyphotic deformity at the distal aspect of the construct. Other fractures denoting instability that can result in a segmental kyphosis include fractures of the pars of vertebrae below the fusion construct, or sacral insufficiency fractures below lumbar instrumentation. Failure of instrumentation at the distal levels of a construct including rod fracture or pedicle screw loosening can also result in acute and segmental kyphosis, and the potential for neurologic deficits. 8,​22 Finally, retrolisthesis or anterolisthesis of the vertebrae below the fusion construct may also comprise a form of DJK.

Although data are sparse, risk factors for DJK have been elucidated in a handful of studies.

The selection of the distal fusion level is eminently critical in minimizing the risk for DJK. 8,​14,​22 Ending a fusion construct proximal to the first lordotic disc space, or proximal to the stable vertebra, can lead to increased stresses borne at the distal end of the construct. 8,​14,​22 Most of our work and knowledge with regard to selecting a distal fusion level is derived from the pediatric scoliosis literature, but it stands to reason that the premise and underlying principles are applicable for adult spinal deformity surgical planning. In both cases, there is often a trade-off between correction of the curve and sparing motion segments. Stopping the fusion short of the appropriate level may result in under- or overcorrection of the major curve, exacerbation of a compensatory curve below the construct, coronal malalignment and trunk imbalance, and adjacent segment disease. This concept will be explored in depth later in the chapter, with a discussion of selection of the distal fusion level.

Ending a long fusion at L5 may also be related to pedicle screw loosening, pseudarthrosis, and vertebral fracture at the distal aspect of the construct that can contribute to DJK. Edwards et al demonstrated a 61% rate of L5–S1 degeneration in a series of 34 patients who had undergone thoracolumbar posterior fusion ending at L5. 29 Sears et al similarly found that fusions ending at L5 results in greater adjacent segment disease than those extending to the sacrum. 30 Distal fixation in the sacrum may constitute S1 pedicular screws (unicortical, bicortical, or tricortical), S2 screws, and sacral alar screws. However, long construct fixation ending at the sacrum, including S1 pedicle screws and sacral alar screws, demonstrates high failure rates. 31,​32,​33 S1 screw strain and the risk of sacral fracture are appreciably increased when S1 pedicle screws alone are used as distal fixation for a long construct. 31 Ending a long construct at S1 without supplementing with pelvic fixation places increased biomechanical stress at the lumbosacral junction. 31,​32,​33,​34,​35,​36,​37 The flexion extension moment on an S1 screw is decreased by the addition of pelvic fixation. 31,​32,​33,​34,​35,​36,​37 The most commonly used type of sacropelvic fixation now are S2-alar-iliac screws and iliac screws. Pelvic fixation has also been shown to provide greater biomechanical stability at the lumbosacral junction and decrease pseudarthrosis rates. 31,​32,​33,​34,​35,​36,​37

While patient-specific risk factors for PJK have been demonstrated including increased body mass index, decreased bone mineral density, and older age, none of these have been explored or borne out in studies of DJK. However, it is reasonable to expect that decreased bone mineral density, or osteoporosis, would contribute to the development of DJK. Finite element analyses have demonstrated that osteoporosis can lead to endplate microfractures of vertebrae adjacent to a long construct, which can create abnormal stress distributions in the intervertebral disc, and lead to disc degeneration. 38,​39,​40

Characteristics of the instrumentation used also play a role in potentially contributing to DJK. Stiffer implants can lead to increased stress at the bone–implant interface, potentiating or exacerbating degeneration and instability of the adjacent unfused level. 24,​25,​26 However, there is a subtle balance to be found given that less stiff implants may be more prone to fracture, particularly in the setting of complex osteotomies. A possible solution for this problem may be stiffer implants crossing the lumbosacral junction, where pseudarthrosis and/or rod fracture are most likely to occur, and using connectors to connect to a less stiff implant spanning the thoracic region. Another potential solution is to not place pedicle screws at every level, with the goal of decreasing the overall stiffness of the construct without compromising the additional stability needed for correction at the apex of the curve.

Adapting the correction to the patient’s preexisting alignment is also important to prevent unintended effects of over- or undercorrection. In patients with sagittal malalignment, restoring balance in the sagittal plane can involve increasing lumbar lordosis or decreasing thoracic kyphosis. The latter can lead to increased kyphosis of the segments above the fused construct, and ultimately PJK or failure, and therefore this latter option is used rarely, only in the setting of severe hyperkyphosis. More commonly, the approach consists of restoring lumbar lordosis to within 10 to 11 degrees of the pelvic incidence. Ghasemi et al demonstrated in a series of 40 patients who underwent surgical correction for Scheuermann’s kyphosis that patients who developed DJK had significantly more correction of their thoracic kyphosis than those who did not, that is, they were left with less thoracic kyphosis. 9 Those who developed DJK were also found to have less lumbar lordosis, although it is possible this was compensatory alignment in the setting of thoracic hypokyphosis.

It is hypothesized the disruption of the capsuloligamentous complex at the UIV can result in PJK. Similarly, there is ample reason to believe that the same principle holds true for DJK. Facet joints and the supra- and intraspinous ligaments at the level below the construct should be left as intact as possible. Although this can be challenging in terms of exposure, or in a revision setting, the posterior tension band is a critical element in preventing kyphotic deformity at adjacent levels.

In cervical deformity surgery, as fusions generally extend to the upper cervical spine, the potential for DJK exists due to the increased stresses at the caudal aspect of the construct. Protopsaltis et al demonstrated a 24% rate of DJK in 67 patients who underwent cervical deformity surgery. 12 Sixty-nine percent of the DJK occurred within 3 months postoperatively, and 31% of DJK occurred between 3 and 6 months. 12 Furthermore, patients who developed DJK had worse baseline and postoperative radiographic alignment, despite similar degrees of intraoperative deformity correction.

It is helpful to consider an example of a patient who developed DJK after surgery for cervical deformity, and the treatment algorithm and revision approach (▶ Fig. 23.1). 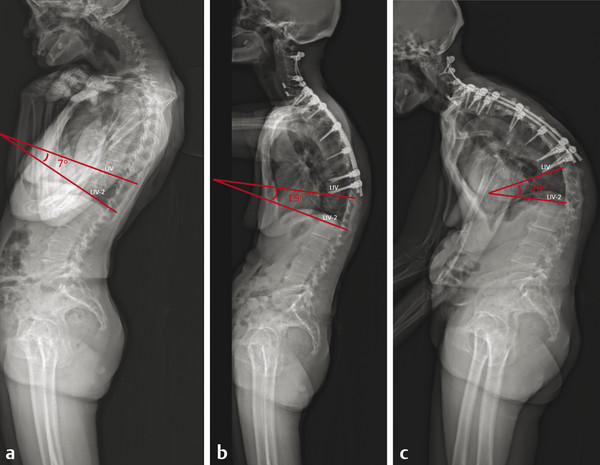