It is paramount that assessment of the patient with ACD undergoes full-length standing radiographs. It is not uncommon to have concomitant thoracolumbar and cervical pathology with up to 53% of patients presenting with thoracolumbar deformity showing associated cervical kyphosis or increased cervical C2–C7 sagittal vertical axis (cSVA). 3

Specific preoperative radiographic parameters suggestive of either a thoracic driver of deformity or a more severe cervical deformity have been shown to increase the risk of DJK, as defined by a change in kyphosis greater than 10 degrees between the LIV and LIV-2 from pre- to postoperatively. However, to date no studies have validated this distal kyphosis angle below the LIV in ACD unlike the proximal junctional kyphosis angle in in thoracolumbar deformity. 6

A recent case–control study by Passias et al found that preoperative thoracic kyphosis (TK) greater than 50.6 degrees, C2–C7 lordosis less than -12 degrees, cervical lordosis/T1 slope mismatch (TS–CL) greater than 36 degrees, and cSVA greater than 56.3 mm were associated with DJK. 7 These scenarios suggest that the surgeon should consider extension of fusion further into the thoracic spine to prevent DJK; however, the exact LIV was not defined in this study. 7 Similarly, Protopsaltis et al demonstrated that TK greater than 50 degrees was also associated with DJK, and that 75% of patients with DJK had a LIV at or above T7, suggesting that extending the fusion distal to T7 might aid in preventing DJK. 5 ▶ Fig. 24.1 demonstrates balanced fusion to T10 in a case of severe cervical kyphosis and chin-on-chest deformity. ▶ Fig. 24.2 shows a case of DJK after C2 to T2 fusion. The patient has three surgical predictors of DJK which were specifically in the cervical spine. Ames and colleagues categorized ACD based on the location of the apex of the deformity. 8 In addressing a C-type deformity, a kyphotic angulation of greater than 10 degrees with a midcervical apex, the fusion should cross the cervicothoracic junction with a LIV of at least T1. In a retrospective cohort analysis, Schroeder et al showed that stopping a multilevel cervical construct at C7 was associated with a 2.3 times greater chance of revision surgery than if the construct was extended to T1. 9 These findings were supported by Osterhoff and colleagues who found a 31% incidence of distal junctional problems if the construct ended at C7 compared to 6.3% if terminated at T1. 10

Ending the fusion at C7 is also associated with poorer postoperative sagittal alignment with Choi et al showing a greater cSVA, greater T1 slope (T1S), and greater TS–CL. 11 With regard to T1S, the authors hypothesize that with fusion T1, the surgeon can fix the angulation of T1. However, the increase in T1S seen with a LIV of C7 could simply be a reciprocal change due to an increase in postoperative C2–C7 lordosis. 12 ▶ Fig. 24.3 demonstrates balanced fusion to T2 in a case of mild cervical kyphosis. 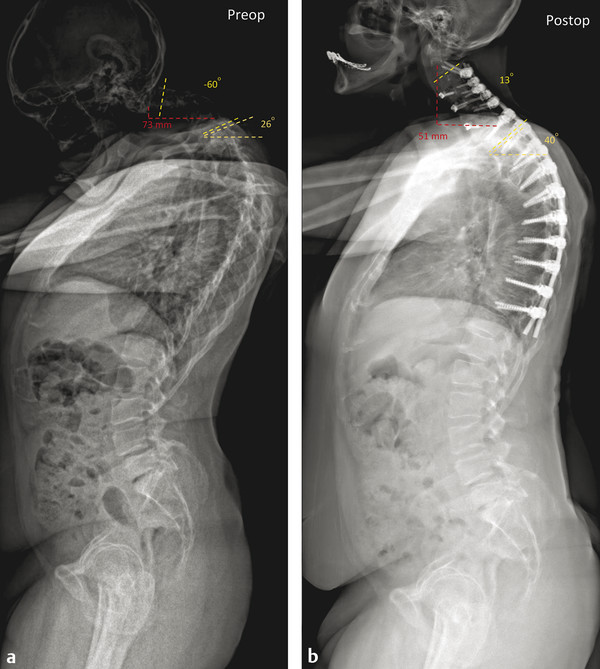 Fig. 24.1 A 64-year-old male who presented with a chin-on-chest deformity. His cervical deformity started in 2 years earlier. He denies any trouble swallowing and has minimal neck pain. He struggles to ambulate. He underwent anterior osteotomies for correction of kyphosis at C3/4, C4/5, and C6/7 and bilateral release of the sternocleidomastoid muscles. Posteriorly he underwent a Grade 2 posterior wedge osteotomy at C4/5 and posterior spinal fusion from C2 to T10. Pre- and postoperative X-rays show correction of the C2 SVA and marked improvement of cervical lordosis. 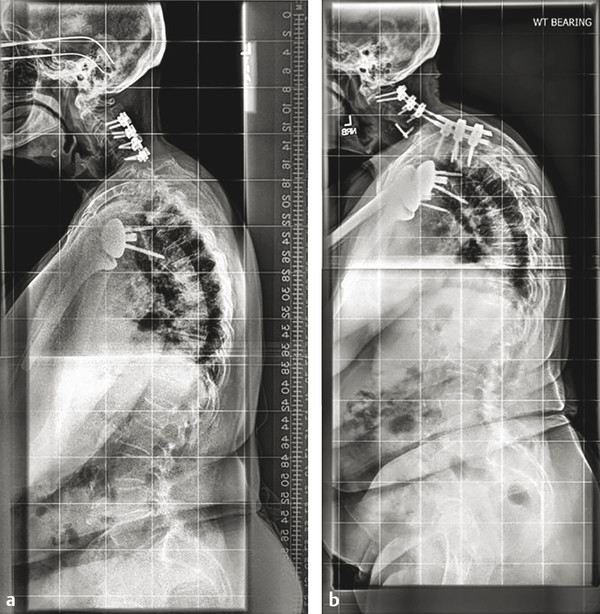 Fig. 24.2 A 76-year-old female who underwent a C3 to C6 posterior cervical decompression and fusion for myelopathy had ongoing neck pain and adjacent breakdown below. She had significant baseline deformity with TS–CL of 44.4 degrees, C2–C7 lordosis of 13.1 degrees, and cSVA of 50.9 mm. She underwent anterior discectomy and fusion at C4/5 and posterior fusion from C2 to T2, however, sustained distal junctional kyphosis at 3 months. Her risk factors for DJK were combined surgical approach, use of a transition rod, and multiple posterior osteotomies. 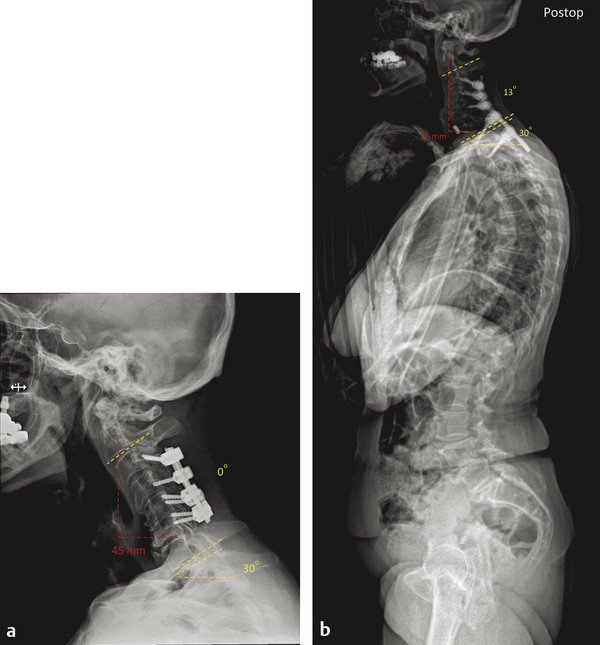 Fig. 24.3 A 71-year-old female presented with axial neck pain post a C3–C6 posterior decompression and fusion with instrumentation for cervical myelopathy. She had been experiencing pain in her mid-neck region associated with any movement. The pain radiated up the ears and into the head. The causes of her symptoms were likely kyphosis at C3–C6, the adjacent degeneration at C6–C7, the forward sagittal deformity from C2–C7, and the upper cervical compensatory hyperlordosis. She underwent anterior/posterior surgery with a discectomy and anterior uncovertebral osteotomy at C6–C7 followed by posterior C2–T2 fusion with Grade 2 posterior osteotomy at the cervicothoracic junction and C6/C7 and C7/T1 laminectomy for decompression of central canal and foramina. Pre- and postoperative X-rays show correction of the C2 SVA and improvement of cervical lordosis.