Adult spinal deformity (ASD) surgery has a greater potential for complications than most other spinal surgeries. This is in part due to the patient population, which tends to be older and with greater underlying comorbidities, as well as the increased physiologic demands that such surgeries place on patients. These complications include surgical as well as medical complications, the latter of which is the focus of this chapter. An understanding of these potential pitfalls allows the thoughtful surgeon to prevent, anticipate, recognize, and potentially mitigate their impact.

Though there is ample literature concerning the development of medical complications following ASD surgery in general, there is a relative paucity of literature regarding adult cervical deformity (ACD) surgery, in particular. While there is considerable overlap in the principles that may lead to development of complications between these two groups of patients, there are also considerable differences, as presented in ▶ Table 19.1. This chapter will focus on those complications more closely related to ACD.

Many patients undergoing surgery for ACD are elderly, and may have a myriad of underlying medical comorbidities. Because of the extensive physiologic toll that such a surgical intervention has on a patient, it is not surprising that perioperative and postoperative medical complications are common. Overall complication rates (both medical and surgical) have been reported as high as 26.8% in large series of ASD patients, with the majority of these representing cardiac, pulmonary, infectious, or gastrointestinal complications. 1,​2,​3 Studies addressing ACD specifically have identified overall complication rates as high as 67%. 4,​5 ▶ Table 19.1 presents a summary of the most common types of postoperative medical complications following ASD.

Dysphagia and dysphonia are perhaps the most common complication following ACD surgery, though this is most often transient. Because of its transient nature, as well as the fact that many patients may not complain about the presence of mild dysphagia, determining the true incidence is difficult. In a multicenter study of 78 patients undergoing ACD surgery, the International Spine Study Group (ISSG) found a dysphagia rate of 11.5%. 5 A single-institution study found that only 2.6% of patients had severe, long-term dysphagia that required use of a feeding tube. 4 There are many reasons for this high incidence. First, much like any anterior cervical surgery, retraction of the trachea and esophagus may lead to symptoms of dysphagia and dysphonia. Second, the presence of cervical deformity—kyphosis in particular—may result in an underlying swallowing dysfunction that can be exacerbated following surgery. 6 Anatomic changes in alignment of the trachea and esophagus may play a role, especially with a long-standing fixed deformity. Correction of a significant, long-standing kyphosis can place these structures in tension, resulting in dysphagia and dysphonia. 7 Furthermore, the use of recombinant human bone morphogenetic protein (rhBMP) has been shown to promote dysphagia. 8,​9

With the high incidence, and multiple etiologies of dysphagia and dysphonia, it may be difficult to be completely prevented, particularly with anterior approaches or large deformity corrections. However, surgical technique may be able to mitigate some of the severity. Although many patients with underlying deformity may have intubation difficulty, the use of advanced intubation techniques can be useful to prevent the airway trauma associated with prolonged or multiple intubation attempts. Care should be taken during anterior approaches to avoid excessive or prolonged traction on the esophagus and trachea. While intraoperative steroid application has demonstrated success in reducing the rate of dysphagia, it is the authors’ belief that the accompanying risk of infection surpasses any benefit, particularly in the setting of these large complex deformities. 9

While infection following anterior cervical surgery is fortunately rare, it is more common following posterior cervical exposures. The increased operative time and blood loss associated with deformity surgery may also contribute to an increased risk compared to other posterior cervical procedures. The ISSG multicenter study found a 6.4% rate of deep surgical-site infection and a superficial infection rate of 3.8%. 5 Grosso et al found a similar rate of 7.9% for deep infections. 4 Interestingly, these rates are substantially higher than the ISSG and other groups have reported for deformity surgery in general, ranging from 2.4 to 4%. 1,​2

As with any other surgery, infection prevention starts with appropriate preparation of the surgical site. In contrast to other areas of spinal surgery, the abundance of hair in the posterior cervical region requires further preparation. Hair should be clipped short to minimize contamination of the surgical site. Ideally, this should be performed in the preoperative holding area to prevent airborne contamination of the operating room. Furthermore, our institution utilizes a standardized protocol involving intraoperative irrigation with dilute Betadine, as well as topical vancomycin powder for the posterior cervical approach. 10

Wound complications in the posterior cervical spine are common. Wound closure is also critical, and should be performed in a layered fashion. Closing the deep muscle, nuchal fascia, and superficial muscle in separate layers is recommended. The skin is often closed with nonabsorbable suture to allow them to be left in place longer to allow the underlying tissue to heal. Postoperatively, routine wound inspection should be performed to assess for any signs of early infection or dehiscence. Posterior cervical wound healing has been shown to be dependent on nutrition. 11,​12 Especially in this patient population, nutritional depletion is common and can be compounded postoperatively by dysphagia. Supplementation with nasogastric feeds, protein shakes, or other modalities is critical to provide the building blocks for successful wound healing.

The most common cause of death following surgery for ASD is respiratory failure. 13 Respiratory complications following ACD surgery are common, and are multifactorial. Because of the intimate anatomic relationship of the trachea with the cervical spine and its alignment, deformity correction may alter the airway dynamics. 6 The presence of dysphonia may be associated with respiratory complications. Dysphagia may predispose patients to silent aspiration events that can contribute to the development of pneumonitis, pneumonia, or respiratory distress. Lastly, the use of an immobilizing collar postoperatively may further depress respiratory function. The ISSG reported respiratory failure in 5.1% of ACD patients. 5 Similarly, Grosso et al identified pneumonia in 5.2% of patients postoperatively. 4 This compares to the ASD cohort, wherein the ISSG reported pneumonia in only 0.6% of patients, and the need for reintubation occurred only 0.3% of the time. 14

For these reasons, respiratory status should be closely monitored following cervical deformity surgery. Communication with the anesthesia providers is critical. Consideration of postoperative transfer to the intensive care unit (ICU) or other higher-level care units should be considered, particularly in a patient with prolonged operative time or any underlying respiratory difficulties. Furthermore, the use of continuous pulse oximetry should be considered in the acute and subacute postoperative period.

Surgical procedures involving the cervical spine are historically associated with low rates of deep venous thrombosis (DVT) or pulmonary embolism (PE), with rates of approximately 1 to 2%. 15 However, because of the greater physiologic demands of deformity surgery as well as the frequency of combined anterior-posterior procedures, there may be an increased risk in those undergoing ACD surgery. The existing literature is highly varied, with rates of PE ranging from 1.3 to 3.9%, and DVT as high as 44%. 4,​5,​15,​16 Thus, while there are limited data available, what literature does exist may reflect a legitimate increase in thrombotic complications.

Prevention of thrombotic complications must be tailored to each individual patient. While mechanical devices and early mobilization are relatively benign means to help prevent DVT, the use of pharmaceutical anticoagulants is controversial. The risk of epidural hematoma or wound hematoma/seroma with pharmacologic agents may outweigh their benefit.

As in all surgery, appropriate preoperative planning is instrumental to improve operative outcomes. This is particularly true with regard to the appreciation of patient comorbidities prior to elective deformity surgery. Numerous studies have sought to identify perioperative risk factors that may predict postoperative complications in patients undergoing ASD surgery. 17,​18,​19,​20,​21,​22,​23 However, many of these studies have addressed ASD surgery in general, and thus are not specific to cervical deformity.

Among the risk factors considered for those undergoing deformity surgery, the most common modifiable factors include abuse of drugs or alcohol, tobacco use, and obesity. In all cases, patients should be counseled and encouraged to adjust these modifiable risk factors through diet, exercise, and substance cessation prior to proceeding with ASD surgery. Nonmodifiable factors include patient age as well as underlying medical diagnoses such as cardiac, pulmonary, or renal diseases. These nonmodifiable factors also increase the risk of postoperative complications. These diagnoses should be identified during preoperative assessment, and appropriate clearance and perioperative management should be sought by the patients, cardiologist, internist, as well as surgical anesthesiologist.

Although several conditions can lead to cervical deformity, these conditions should be identified and assessed for expectant management postoperatively. Among these conditions are inflammatory conditions such as rheumatoid arthritis and ankylosing spondylitis, neurologic deterioration such as Parkinson disease, and neuromuscular disorders such as myasthenia gravis. 24 Lastly, deformity may be secondary to other causes including trauma, postradiation, or postoperative.

There are conflicting data in the literature supporting the hypothesis that elderly patients are at greater risk of postoperative medical complications. A recent study by the Spinal Deformity Study Group found a dramatic increase in overall complications with increasing age for patients undergoing deformity surgery in general. They stratified patients into the age groups of 25 to 44, 45 to 64, and 65 to 85 and identified rates of complications of 17, 42, and 71%, respectively. 19 However, these results were not divided into medical versus surgical complications. In contrast, the ISSG did not find age to be a risk factor among those with specific cervical deformity, though their study may be underpowered to detect such a difference. 5

The presence of medical comorbidities is not surprising given the advanced age of many patients undergoing ACD surgery. This can make the intraoperative and postoperative care of these patients more challenging. Underlying respiratory illnesses should be considered, considering the elevated risk of respiratory complications following ACD surgery. Furthermore, the presence of increasing medical comorbidities has been found to be an independent predictor of hospital readmission. 25

19.4 Effect of Complications on Patient Outcomes

There is insufficient literature available regarding outcomes in those who develop complications following ACD correction, compared to those who do not experience complications. However, the available literature does suggest that most patients can expect overall improvement. 4,​5,​16 Medical complications following deformity surgery are associated with increased perioperative cost as well as length of stay. 26,​27,​28 Complications do not, however, appear to have an impact on long-term patient-reported outcomes following ASD surgery, with similar improvements in Oswestry Disability Index (ODI), SF-36, Scoliosis Research Society (SRS), and patient satisfaction scores seen at 2-year follow-up in patients with and without perioperative complications. 29,​30,​31

▶ Fig. 19.1 shows the AP and lateral radiographs of a 72-year-old female who presented with disabling neck pain and trouble maintaining a horizontal gaze. In addition to a clear sagittal plane deformity, she also had a profound coronal plane deformity resulting in a “cock-robin” position of her head. In addition, history and physical exam revealed signs and symptoms consistent with cervical myelopathy, which was confirmed on MRI (▶ Fig. 19.2).

The patient was taken to the operating room where she underwent a combined anterior-posterior decompression, fusion, and deformity correction (▶ Fig. 19.3). Postoperatively, she was admitted to the ICU for ventilatory support due to airway swelling. She was unable to wean from ventilatory support, and on postoperative day 5 the decision was made to undergo tracheotomy, which can be seen in the radiographs of ▶ Fig. 19.3. 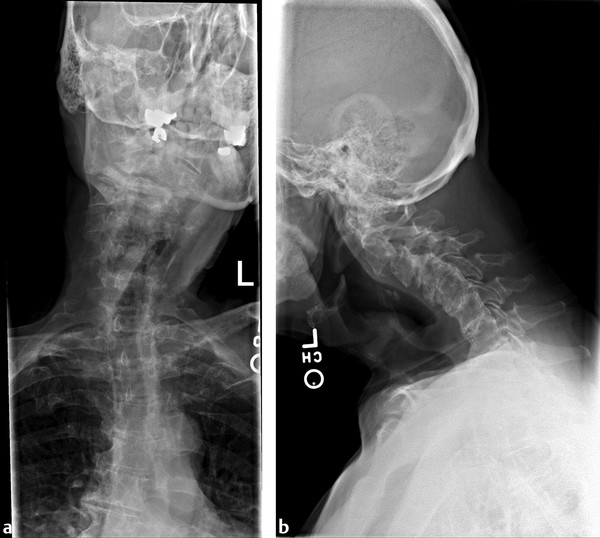 Fig. 19.1 Preoperative radiographs. (a) A rigid coronal plane deformity that resulted in a “cock-robin” head position. (b) A neutral latera, demonstrating significant loss of normal lordosis.