Most patients with dementia attending this clinic are capable of giving a pain history, and complete simple psychometric instruments such as the brief pain inventory (see Table 23-3). No questionnaires are sent to patients prior to the initial attendance, as this may be seen an indirect barrier for attendance, especially for people with dementia or limited English language skills. The staff assist patients with the psychometric instruments, using an interpreter when appropriate. 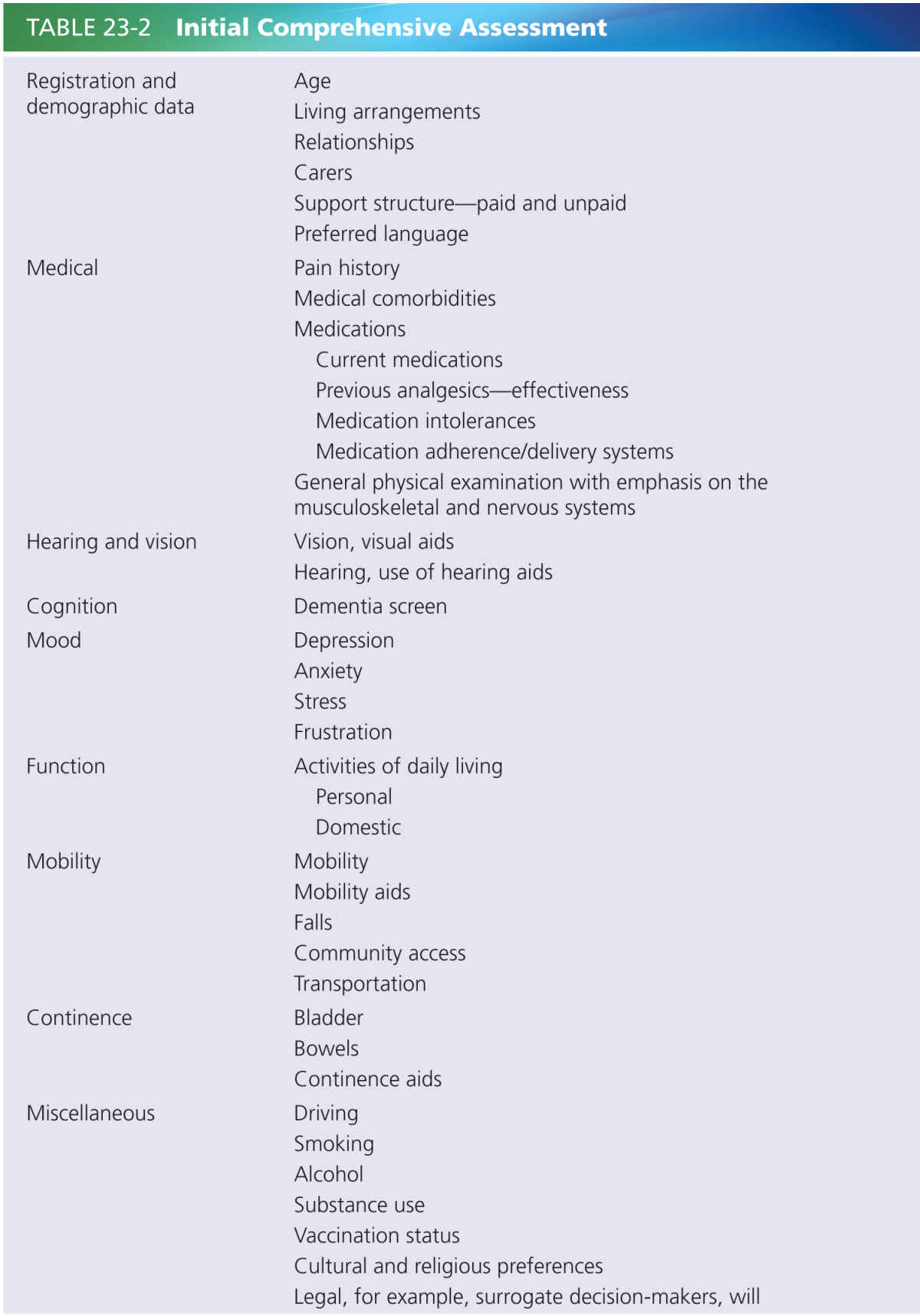 The mean age of the patients attending the clinic is 81.6 years (range 64–94), with 72% females. Patients tend to be frail; eighty five percent were rated vulnerable to severely frail on the clinical frailty scale [24]. Personal care assistance was being used by 34%, and 18% were living in residential care facilities. More than 50% reported back pain as the major pain site, with 85% reporting pain at more than one site. Pain had been present for ≥24 months in 66.2%, ranging up to 40 years. Cognitive assessment was undertaken with mini-mental status examination (MMSE), clock drawing test, and clinical assessment. Cognitive impairment using a cutoff on MMSE of ≤25 was present in 43.5% [11]. Moderate to severe cognitive impairment with MMSE scores of ≤20 was present in 20.6%. Cognitive impairment based on expert opinion was present in 43.1%. The average number of comorbid medical conditions was 7.2 of 14 possible categories, with 83.1% having at least one severe disability/health problem [21]. The average number of medications was 10.8 per person. At initial presentation 75.4% were taking opioid analgesia, 47.1% antidepressants, and 20.6% anticonvulsants. 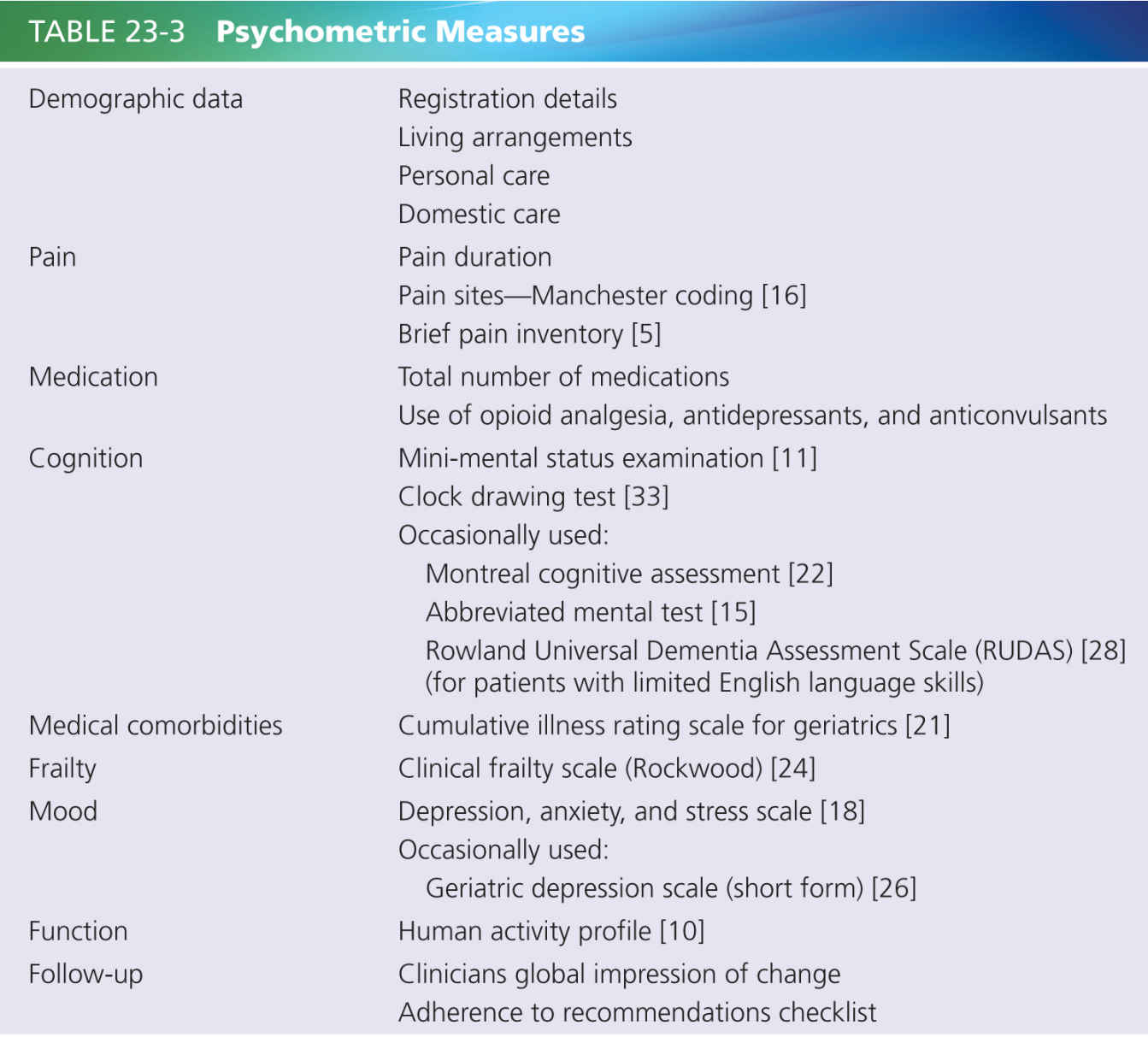 APPROACH TO PEOPLE WITH DEMENTIA

Routine screening for dementia should occur at initial health service contact, to avoid the possibility of missing a patient with dementia that has not yet be diagnosed. The approach to a patient with dementia is determined by the severity, type of dementia, and the presence of other comorbid conditions such as hearing impairment. Individuals with dementia can often report their pain and complete pain scales, even in advanced stages of dementia [23]. Questions should be short, simple, and specific. It may be helpful to take the patient through provocative activities for pain such as walking, asking them along the way to report the pain. The conversation should not just be through the carer. Table 23-4 outlines key points in communication with people with dementia.

Two case studies of patients with dementia are presented to highlight the multidisciplinary approach to pain management. The first case focuses on a patient with early dementia, and how it affected pain report and management. In the setting of early dementia the individual is usually capable of reporting pain. The challenge is to identify the cognitive impairment and determine the impact that it is having on the pain report and to make appropriate modifications to the management plan. This stands in contrast to severe dementia when the individual may no longer be able to report pain. The diagnosis of dementia is not the challenge, but the identification of pain and its impact are.

Mrs. T, aged 84 years, presented to the Pain Clinic with a 2-year history of neck and lumbar back pain following a fall. She had a history of back surgery. The pain was considered secondary to lumbar canal stenosis with lumbar spine instability. Pain severity averaged 6/10 during the day, aggravated by physical activity and walking, when it became intolerable at 8/10 for up to 2 hours. She had previously attended an academic memory clinic. Alzheimer’s disease was diagnosed, and she responded well to cognitive-enhancing therapy. On presentation at the pain clinic the features of dementia were subtle and could have been easily missed. Her MMSE score was 28/30. Her husband reported that her conversations were at times repetitive, that she was having difficulty with library books that she could previously follow, and he raised concern about her safety in the kitchen. Her pain management program comprised a combination of pharmacological and nonpharmacological treatments, including an exercise program and occupational therapy assessment of her safety in the kitchen.

Two months later Mrs. T reported that her pain had reduced by 50% and she was now more active. Her husband reported that pain was not having a significant impact on her function, but that her cognition was. She was keen to achieve even better pain control, requesting an increase in analgesic dose. The increased dose of opioid resulted in a deterioration in cognition, drowsiness, nighttime behavioral disturbance, and on one occasion not being able to find her way home following a walk. These symptoms improved once the dose was reduced. At the next clinic visit, she again requested an increase in medication dose. She had no recollection of the previous adverse response and subsequent conversations, but retained the capacity to work through the issues during the discussion, agreeing that a dose increase was not wise. The same conversation occurred on subsequent visits.

The management strategy was modified, with more emphasis being placed on supervised nonpharmacological strategies, such as an aerobic fitness program and support for her husband to help him manage her increasing care needs. Mrs. T was given a letter outlining the reasons why her medication dose should not be increased, and how to deal with exacerbations of pain. Her husband would refer her to the note when she requested additional medications at home.