The Epidemiology of Pain in Dementia

Several kinds of primary progressive dementia (where the dementia itself is the primary illness) exist, including AD, frontotemporal dementia, vascular dementia, dementia with Lewy bodies (DLBs). Dementia may also occur secondary to other recognizable illnesses such as Parkinson disease, multiple sclerosis, and Huntington disease. In addition, dementia can be nonprogressive (e.g., in traumatic brain injury) and can be temporary and transient (e.g., in people with delirium). It is worth noting that delirium is commonly present in people with dementia and adds an additional challenge to assessment. Although we are focused on primary dementia, similar issues arise for identification of pain in the broad range of conditions in which dementia is a central component. Table 4-2 summarizes the estimates of different kinds of dementia in the general population from the medical literature. By far, AD is the most common form of progressive primary dementia, usually accounting for 60% of dementia patients [56]. 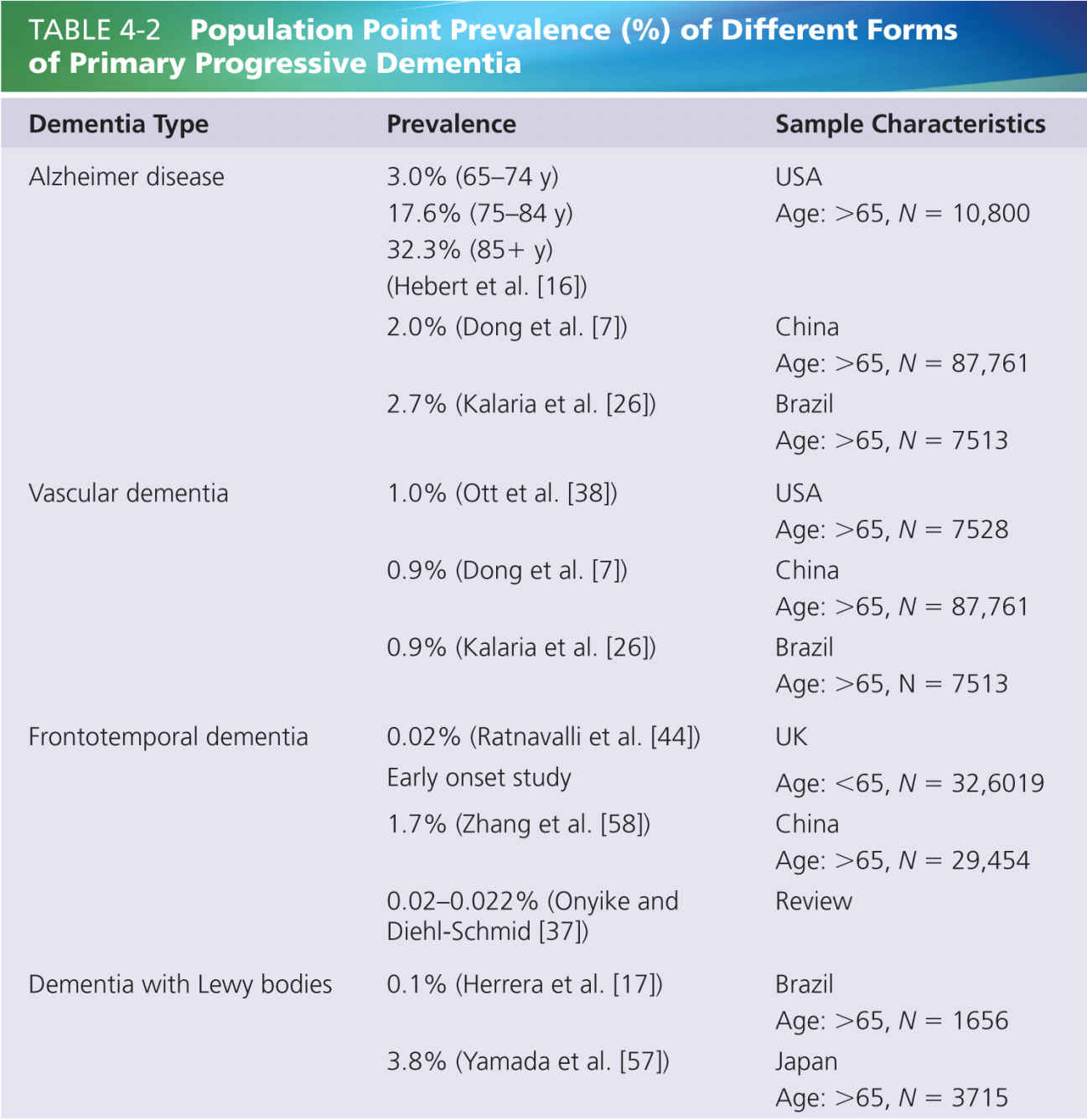 Different types of progressive dementia have varying average age of onset and varying course. For example, frontotemporal dementia is more likely to have an early onset (before 65 years in 75% of patients), whereas AD is much more a feature of advancing age, and thus considerably more prevalent in those over 65 years.

THE EPIDEMIOLOGY OF PAIN

Pain is also a prevalent problem across the life span and increases in prevalence among older individuals [3], irrespective of level of cognitive ability [48]. Although pain is a near-universal experience, the personal, economic, and social burden of pain is most obvious for chronic pain.

As it is clear from the data presented in these studies, dementia and pain are independently highly prevalent across the life span. Without taking into consideration the possibility of one condition actually being a risk factor for the other, we can infer that dementia and pain are commonly comorbid; thus, it may be a growing problem as our population lives longer. Recognition of the prevalence rates of pain in people with dementia is a necessary first step in alerting caregivers to this problem to ensure adequate pain management.

PAIN IN DEMENTIA: AN EPIDEMIOLOGICAL CHALLENGE

Up to 80% of people living in nursing homes report pain [19]. However, the literature is also quite clear that patients with dementia are actually undertreated for pain [12, 34] (see also Chapter 3). The undertreatment of pain in patients with dementia may arise from the difficulty in assessing and detecting acute or chronic pain in populations with progressive cognitive decline. Zwakhalen [59] found that those with dementia report pain less often and at a lower intensity than those without cognitive impairment. As pain is a subjective experience, it is difficult to identify pain in those who are essentially unable to verbally communicate their discomfort or distress [12]; (see also Chapters 9 and 10).

Table 4-4 summarizes a number of studies that examined the prevalence of chronic pain in people with dementia. The varied prevalence rates are indicative of the host of different methods used in assessing pain, some of which are not suited to accurately detect pain in those with dementia. For acute and chronic pain assessments, verbal communication is commonly a core requirement on the part of the patient. However, the ability to accurately self-report reduces with the severity of dementia [35], and the ability to remember pain and to describe pain diminishes [51] (see also Chapter 10). Although people with AD report pain less often and tend to show blunted autonomic reactions to procedures such as injections, many experimental studies have found that pain thresholds reduce with age [15] so that increased pain perception may actually occur. Furthermore, patients with AD are frequently found to display increased facial expressions of pain and to have enhanced withdrawal reactions [28, 29] (see also Chapter 11).

These difficulties in reliably identifying pain can lead to a situation where pain is poorly managed or undertreated. Observational methods of assessment are no doubt more appropriate in situations where there is impairment in the patient’s ability to communicate (see Chapter 10). Consequently, when observational methods are employed over other methods to detect pain, the prevalence rates of pain in dementia rise [48]. 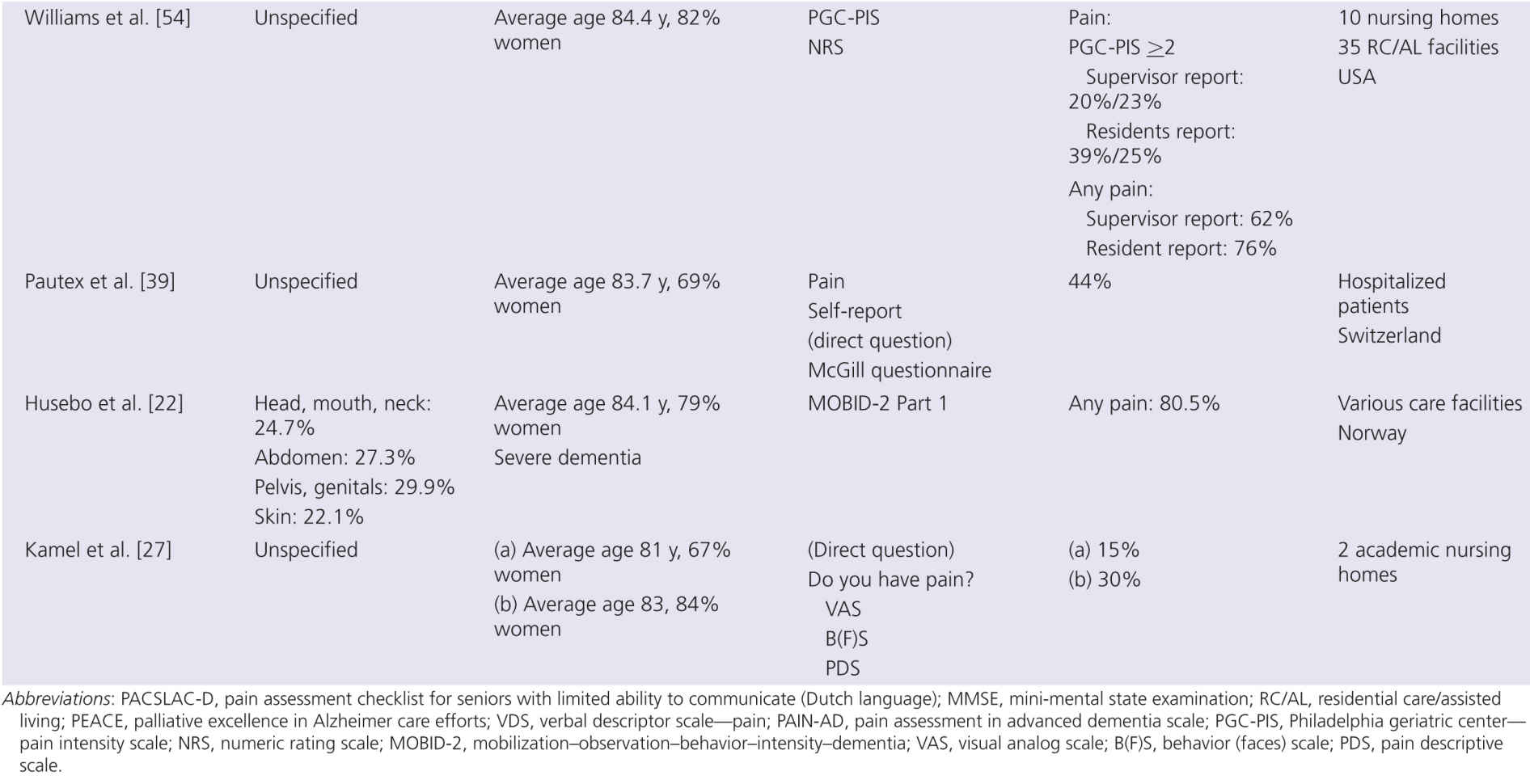 The difficulty in identifying pain in dementia patients must be considered carefully as the undertreatment of pain can have a major impact on those with limited expressive capacities. Dementia patients are consistently treated with less pain medication than patients with no communicative disabilities [32] (see also Chapter 18). Decreased life expectancy, increased risks of falls, sleep disorders, and appetite disturbance are linked with the undertreatment of pain over and above that due to deterioration of cognitive and physical abilities [6] (see also Chapter 3).

Pain contributes to aggressive behaviors; instances of verbal and physical aggression rise with persistent pain [20] (see also Chapter 7). Verbally agitated behaviors such as negativity, repetitive questions, and complaining are common [6]. Other nonaggressive behaviors such as repetitive mannerisms or persistent, restless pacing may be other manifestations of untreated pain. These are often treated with antipsychotics instead of with appropriate pain management, despite the many potential adverse side effects of psychotropic drugs [31, 40]. This highlights further the need for accurate pain assessment methods in dementia patients to avoid risks associated with inappropriate treatments.

RISK FACTORS FOR PAIN IN DEMENTIA

Gender differences have been observed in many studies of pain perception involving healthy adults, with women commonly having a lower pain tolerance and threshold than do men and an increased prevalence of chronic pain [11, 43, 53]. However, little is known about gender as a risk factor for pain in dementia. A recent study conducted in Northern Ireland among 75 dementia patients did find an effect of gender on reports of pain “right now” [1]. Among the 42 women in the study, 63% expressed that they had pain at the time of assessment compared with 37% of male dementia patients. However, this relationship was not significant; only analgesic use was predictive of pain “right now.”

Similar findings were observed in a Dutch nursing home study involving 23 male and 94 female dementia patients [60]. Multiple linear regression analysis revealed that gender was a significant predictor of pain, which was assessed using the pain assessment checklist for seniors with limited ability to communicate (PACSLAC-D) [13

Tags: Pain in Dementia
Mar 8, 2017 | Posted by admin in NEUROLOGY | Comments Off on The Epidemiology of Pain in Dementia
Premium Wordpress Themes by UFO Themes
WordPress theme by UFO themes