Osteotomy in the Thoracolumbar Spine for Cervical Deformity

It is well known that corrective surgeries for thoracolumbar deformity influence cervical spine alignment. 1,​2,​3,​4 In response to spinal malalignment, the human body uses compensatory mechanisms to achieve an upright posture and maintain the head over the pelvis for a horizontal gaze. In primary thoracolumbar deformity, loss of lumbar lordosis (LL) and increased thoracic kyphosis (TK) are accompanied by increased pelvic tilt caused by the compensation mechanisms of the lower back, hip extensor musculature, and cervical hyperlordosis to obtain a horizontal gaze. Pre- and postoperative reciprocal changes in these adjacent regions have been described in many studies of thoracolumbar osteotomy (▶ Fig. 15.1). 5,​6,​7

Surgical correction of thoracolumbar kyphosis by osteotomy improves cervical spine alignment from hyperlordosis to a more natural lordotic curve because decreased TK and increased LL do not require compensation to preserve sagittal balance and horizontal gaze. Cervical spine deformity correction without direct correction of cervical alignment but rather through thoracolumbar osteotomy is achieved by the improvement of T1 slope and C2–C7 sagittal vertical axis (SVA), which restore the horizontal gaze (▶ Fig. 15.2). 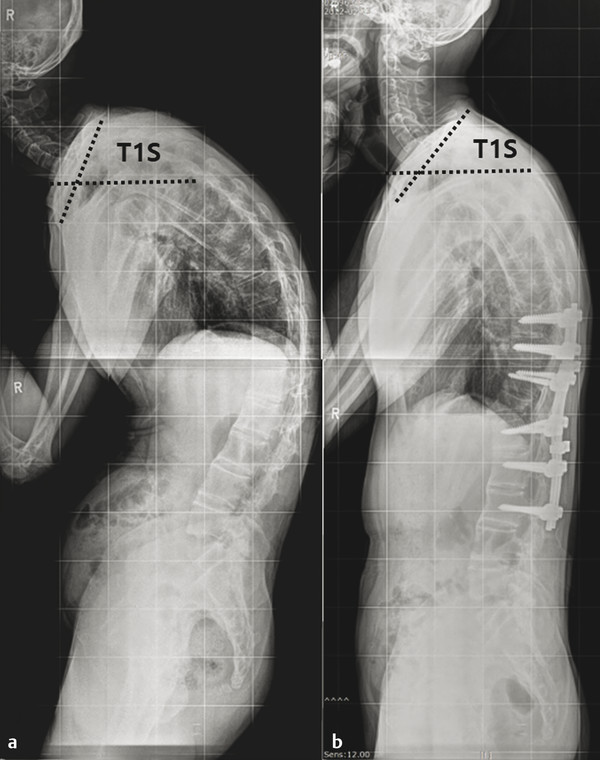 Fig. 15.1 Preoperative (a) and postoperative (b) whole-spine standing radiographs of a 35-year-old man with ankylosing spondylitis. He had a fused thoracolumbar spine with kyphotic deformity but mobile cervical spine segments. After a T12 pedicle subtraction osteotomy, thoracolumbar kyphosis and C7 sagittal vertical axis were improved significantly. According to the decrease in T1 slope (T1S), his preoperative cervical hyperlordosis changed to a natural lordotic curve without any surgical correction of the cervical spine. 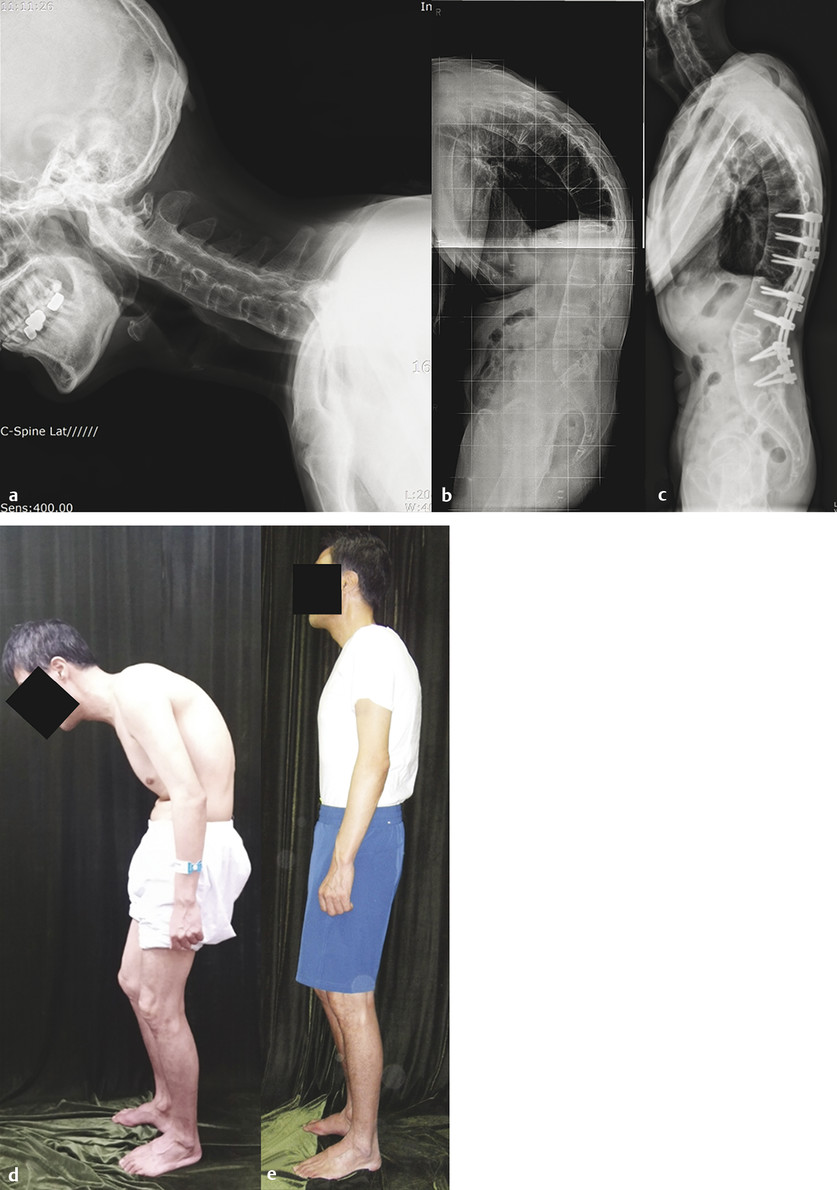 Fig. 15.2 Preoperative cervical spine standing lateral (a) and whole-spine (b) radiographs of a 53-year-old man with ankylosing spondylitis. Preoperatively, the cervical to the thoracolumbar spine was autofused. Normal cervicothoracic angle (C6–T4) is noted. After L3 pedicle subtraction osteotomy (c), his lumbar lordosis improved from 5 to 35 degrees and C7 sagittal vertical axis improved from 23 to 8 cm. The gross cervical deformity was also corrected according to improvement in thoracolumbar kyphosis. Preoperative (d) and postoperative (e) photographs of the patient show major correction of global sagittal imbalance. Improvement of the chin–brow vertical angle and restoration of the horizontal gaze were possible through the secondary effects of lumbar osteotomy. No other procedure was performed for the cervical deformity.

15.2 Evaluation of Spinopelvic Alignment in the Ankylosed Spine 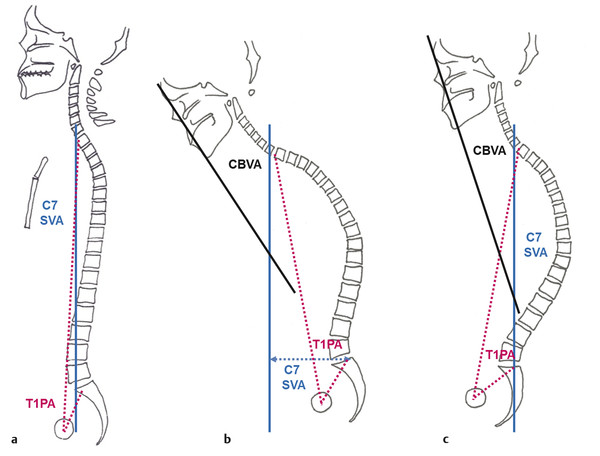 Patients with AS or diffuse idiopathic skeletal hyperostosis have a variable degree of ossification or pseudarthrosis in the spine, even in the middle of ankylosed segments. Terminating fusion at the junction of incomplete ossification or pseudarthrosis may cause early junctional failure. Extension of instrumentation within the ankylosed segments can provide more rigid fixation without further loss of motion segments. Cervical, thoracic, and lumbosacral spine flexion–extension radiographs and whole-spine CT scans are required to evaluate fusion.

15.3.1 The Apex of Thoracolumbar Deformity

When patients have diffuse TK or when the apex of the deformity is at the midthoracic spine, the surgeon may consider thoracic multilevel Smith-Petersen osteotomy (SPO) or three-column osteotomy, including pedicle subtraction osteotomy (PSO) or vertebral column resection (VCR), depending on rigidity of the deformity and degree of correction angle required. Multiple SPOs are not indicated in a completely ankylosed or fused spine. PSO and VCR are options for rigid, severe deformity.

When a patient’s thoracolumbar junction angle kyphosis is more prominent than TK, and LL is not kyphotic, an osteotomy at the lower thoracic spine (T11 or T12) or the upper lumbar spine (L1 or L2) is an efficient way to correct TK and LL. If the TK and thoracolumbar kyphosis are not severe and the more dominant kyphosis is in the lumbar spine, PSO at L3 or lower may be a good option for correction of the global deformity. A lower lumbar PSO (at L4 or L5) can provide more SVA realignment than upper lumbar PSO with the same degree of correction because of the longer lever arm. However, lower lumbar PSO may be more technically difficult because the anatomical dimensions of pedicles, transverse processes, and vertebral bodies are bigger than in the upper lumbar spine and, in most cases, require pelvic fixation to stabilize distal segments of the spinal column.

15.3.3 Estimation of the Required Degree of Correction

C7 SVA is one of the most important indicators of global spinal alignment. Correction of C7 SVA to within 5 cm of the posterosuperior corner of S1 is a good target. However, C7 SVA may not reflect local deformities within the thoracic and/or lumbar spine with compensation through pelvic retroversion. Recently, a novel parameter, T1 pelvic angle (the angle between the line from the axis of the femoral head to the center of the T1 vertebra and the line from the axis of the femoral head to the middle of the S1 UEP) has been proposed to measure true thoracolumbar deformity considering pelvic retroversion and pelvic tilt in patients with sagittal compensation, and it has been shown to correlate with health-related quality-of-life outcomes (▶ Fig. 15.3). 8 T1 pelvic angle of less than 14 degrees is ideal. It is important to preserve 10 to 15 degrees of undercorrection of CBVA in patients with an ankylosed spine from the cervical to thoracolumbar regions. Overcorrection of CBVA may worsen preoperative impairments in horizontal gaze and activities of daily living, such as reading, eating, and walking down stairs.

Determining the amount of correction needed is the first step in surgical planning for corrective osteotomy. However, the optimal degree of correction is highly controversial. The oldest and simplest method is to consider only the local area of the deformity, such as LL or thoracolumbar angle. It involves correction of LL to achieve the desired lordotic angle using any osteotomy technique, including SPO, PSO, or VCR. However, the optimal LL is not easy to determine because the reported normal value of LL ranges from 30 to 89 degrees. 18,​19,​20 LL for a given patient should be proportional to the observed PI. Because of the strong correlation between PI and LL, it is an acceptable goal to reconstruct LL to reach a PI minus LL of less than 10 degrees. Ondra et al 21 proposed a trigonometric calculation of the required degree of correction at the PSO level based on C7 SVA. Although these methods make it easy to predict the degree of correction, they can lead to undercorrection because they do not account for pelvic compensation.

Initial attempts to predict the degree of correction, including pelvic parameters, were performed by van Royen et al. 22 They presented a planning method to predict degree of correction after osteotomy in patients with AS based on CBVA and sacral slope. Le Huec et al 23 proposed a more complicated “full balance integrated” method, including hip flexion and pelvic tilt angles for the calculation of the required degree of correction. Simulation software was later developed. The first software was ASKyphoplan, used by van Royen et al 22 to assist in planning corrective osteotomy for patients with AS. Most recently, the reliability of a free computer program, Surgimap Spine (Nemaris Inc, New York, NY), has been validated. 24,​25,​26 In a simulation using Surgimap, the level and amount of correction are based on corrected pelvic tilt, which may prevent undercorrection of SVA. 24,​25,​26 However, the simulation does not account for compensatory changes in the unfused segments of the spine. In addition, the ideal pelvic tilt and actual restoration of pelvic tilt are unpredictable.

15.4 Outcomes of Thoracolumbar Osteotomy for Cervical Sagittal Balance in the Ankylosed Spine

A midline skin incision is followed by subperiosteal dissection of the paraspinal muscles to expose the spinous processes, laminae, facet joints, and transverse processes. Exposure typically extends three levels above and below the intended osteotomy level but may be expanded according to instrumentation fixation strength and osteoporosis. Pedicle screws are inserted before performing osteotomy procedures.

The osteotomy starts with a V-shaped laminectomy and bilateral symmetric total facet joint resections. Laminectomy consists of removal of the inferior lamina of the cranial vertebra and superior lamina of the caudal vertebra using osteotomes, Kerrison rongeurs, or bone scalpels. Corresponding ligamentum flavum and facet joint capsules should be removed completely before closing to avoid dural sac and nerve root impingement. Complete facetectomy is important, especially for lumbar SPOs, to prevent postoperative radiculopathy and to achieve optimum degree of correction. If the deformity is too rigid or additional correction is needed, transverse process and rib disarticulation are helpful to obtain more correction in the thoracic spine. SPO is performed in three to four segments, depending on the angle and rigidity of the deformity.

Reduction of the osteotomy starts from gentle and gradual assembly of a prebent rod with a desired correction angle using various reduction clamps connecting to the pedicle screws. After rod assembly, intersegmental compression between the pedicle screws over the rods can close the gaps between the laminae. Compression of the head of pedicle screws without rod assembly may cause uncontrolled reduction, which may be complicated by pedicle fracture, anterior column fracture, or segmental translation. Although the reported incidence of neurological complications after SPO is lower than that after three-column osteotomies, careful monitoring of possible dura impingement between the laminae and any changes in neuromonitoring signals is critical during the reduction procedure. Decortication and bone graft for successful fusion are the final steps for multilevel SPO. 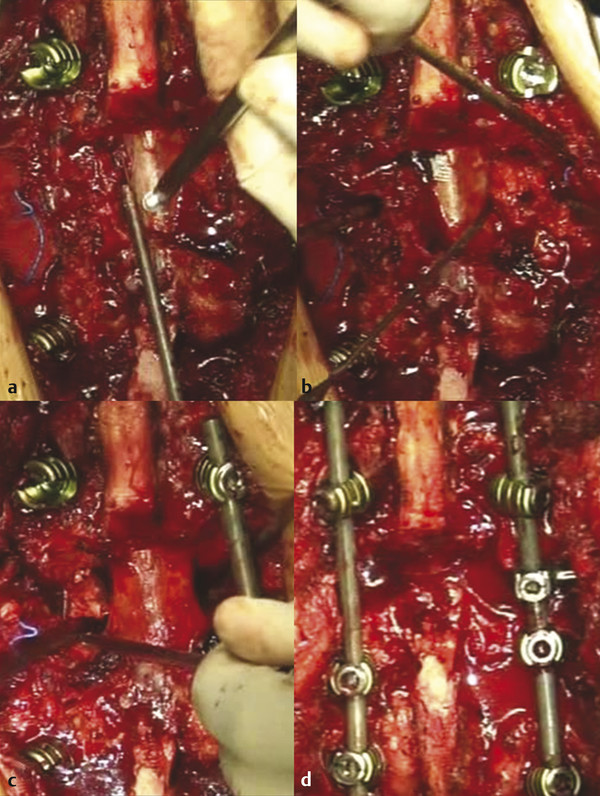 Fig. 15.4 Intraoperative photographs of lumbar pedicle subtraction osteotomy. Sequential steps include (a) laminectomy and facet resection, (b) transverse process and pedicle removal, (c) decancellation of the vertebral body and lateral wall removal, and (d) closing of the osteotomy.