The cervical spine is composed of seven vertebrae, which articulate in a manner that supports head and neck movement, axial cranial loads, and maintenance of horizontal gaze while providing structural support for the spinal cord and associated neurovascular structures. 1 As the most mobile spinal region, the cervical spine is essential for the performance of daily tasks and maintenance of patients’ quality of life. 2 Therefore, patients with cervical spine deformities (▶ Fig. 7.1) can have a severely negatively impacted quality of life secondary to pain, motor or sensory deficits, inability to perform acts of daily living, and inability to maintain horizontal gaze. The ability to assess cervical spine deformity both clinically and radiographically is imperative for deciding appropriate treatment. 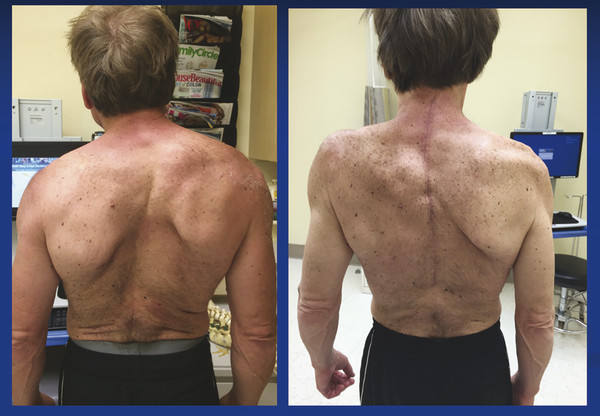 Fig. 7.1 Example of a patient with cervicothoracic deformity before and after surgical correction. This patient presented with severe neck pain and was unhappy with his appearance.

Routine physical exam begins with general observation of the patient. The patient should be observed in dynamic and static situations (▶ Fig. 7.2), noting the patient’s posture and quality of movement. Posture should be observed with both sitting and standing. In addition, it is extremely important to ask the patient to stand in a comfortable position, which may be significantly different from their forced upright posture (▶ Fig. 7.3). An abnormal posture that may be indicative of cervical spine deformity is upper crossed syndrome. Chronic poor posture leads to tightness of the upper trapezius, levator scapula, and pectoralis major and minor crossed with weakness of the middle and lower trapezius. Over time, this imbalance may lead to joint dysfunction, particularly at the atlantooccipital joint, C4–C5 segment, and cervicothoracic junction. 3

The patient’s horizontal gaze should also be assessed, as worsening cervical deformity alters the gaze level and decreases quality of life. Horizontal gaze is assessed by having the patient stand with the neck in a neutral or fixed position while the hips or knees are extended. In this position, parameters for horizontal gaze can be measured, such as the chin–brow vertical angle (CBVA; ▶ Fig. 7.4), described in further detail later; the slope of sight or the Frankfort line, from the anteroinferior margin of the orbit to the top of the external auditory meatus; and the McGregor slope, from the posterior margin of the hard palate to the most caudal part of the occiput.

Any movement of the upper and lower extremities should be fluid and symmetric. Asymmetry may be due to underlying pain and/or weakness. While assessing posture and movement, the clinician should also observe muscle form and soft tissue surrounding the cervical spine. Muscle bulk and tone should be assessed for right and left symmetry. In response to chronic stress from deformity, muscles may shorten, weaken, or become tender to palpation. For example, trapezius muscle tenderness and increased tone are seen in patients with a dorsal kyphotic deformity (▶ Fig. 7.5). Strain from deformity can also result in swelling and tenderness of soft tissues surrounding the cervical spine. 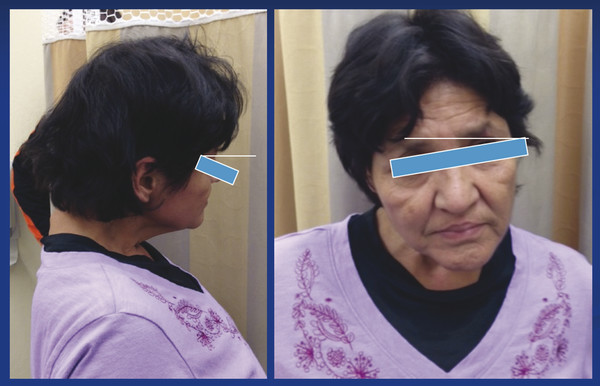 Fig. 7.2 Abnormal static posture in a patient with cervical spinal deformity. She experiences neck pain and head position fatigue that is worse at the end of the day. 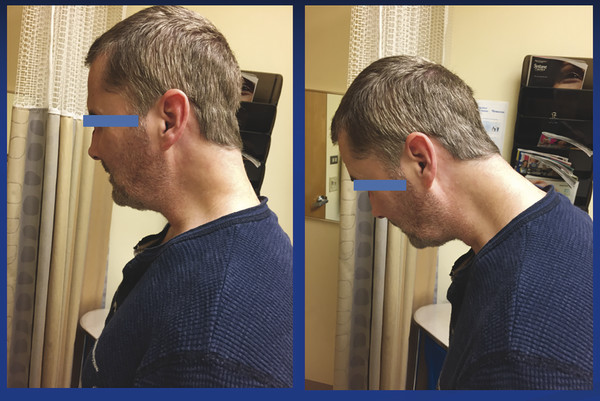 Fig. 7.3 On the left is the patient’s posture when asked to stand straight; on the right, when he stands comfortably. 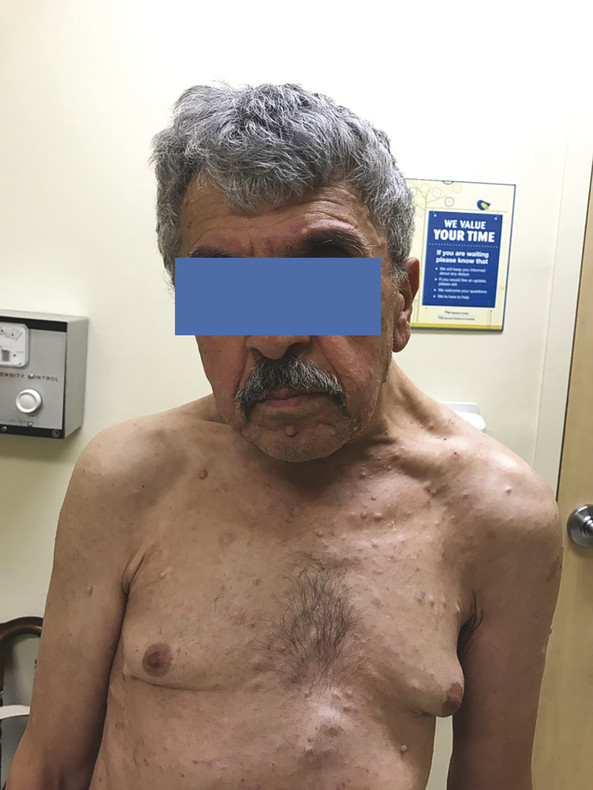 Neck rotation along with lateral bending, flexion, and extension are important for gauging the extent of cervical spine deformity. The clinician should assess both active and passive range of motion. While assessing the range of motion, the clinician should also note the quality of the movement, pain or resistance to movement, and muscle spasm in response to movement. Normal parameters for neck range of motion are as follows: rotation up to 90 degrees but on average 13 to 57 degrees; lateral bending up to 43 degrees but on average 9 to 21 degrees; and flexion up to 60 degrees but on average 13 to 32 degrees. 4,​5 While decreases in the degree of neck range of motion can be an indicator of cervical spine pathology (▶ Fig. 7.6), it must be used in conjunction with the rest of the physical exam and imaging in order to distinguish deformity from other disorders and to decipher the exact deformity. 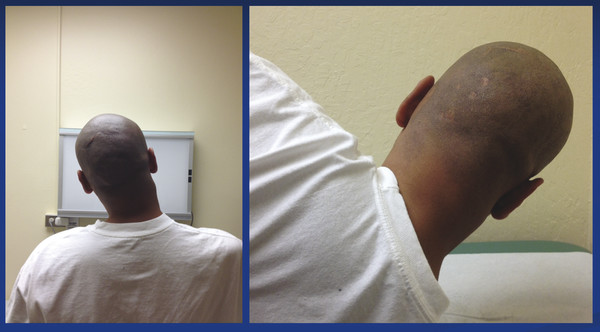 A decrease in muscle strength, particularly in the upper extremities, may be indicative of spinal cord or nerve root compression secondary to cervical spine deformity. Basic testing of strength in the physical exam is testing of movement against resistance using the following scoring scale: 5, able to fully overcome resistance; 4 (+ or -), able to overcome resistance to varying degrees, but not fully; 3, able to move antigravity, but not able to overcome resistance; 2, muscle contraction present, but limb cannot move against gravity; 1, muscle twitch present, but no substantial movement of the limb; and 0, no movement. Each joint of the upper extremities should be tested in isolation on both the right and left sides for shoulder abduction, elbow flexion and extension, wrist flexion and extension, and hand intrinsic strength. Lower extremity strength may also be tested in the same manner.

Similarly, reflexes should be tested for presence, grade, and symmetry. The following grading scale is used: 4, clonus; 3, hyperreflexic; 2, normoreflexic; 1, hyporeflexic; and 0, no reflex. Reflexes in the upper extremities that should be tested include biceps, triceps, and brachioradialis. Additionally, sensation to touch should be grossly tested on the scalp, neck, and upper extremities. To further discriminate which spinal cord tracts are available, touch may be further separated into light touch, pinprick, vibration, and proprioception. Lower extremity sensation and reflexes should be tested in the same manner.

There are additional signs present on the physical exam that can implicate spinal cord compression in cervical spine deformity. The most well-known is the Hoffman sign. The Hoffman sign is elicited by flicking the nail of the middle finger. Subsequent flexion of the ipsilateral index finger and/or thumb is considered a positive sign and suggests underlying pyramidal tract pathology secondary to cervical spine compression. 6,​7 Additionally, Spurling test may be used to assess for cervical nerve root compression. The patient’s neck is flexed 30 degrees to the affected side if a downward axial compressive force is applied. A positive test is pain radiating down the affected dermatome. 8

Cervical lordosis (CL) is measured as a negative angle on imaging, as compared to kyphosis, which is a positive angle. There are multiple methods used for measuring CL: the modified Cobb method (mCM), the Jackson physiological stress (JPS) line, the Ishihara index, and the Harrison posterior tangent (HPT) method 2,​9 as seen in ▶ Fig. 7.7. All measurements can be obtained using sagittal views on X-rays or CT scans of the cervical spine. The mCM (▶ Fig. 7.7a) is calculated by first drawing lines along the inferior endplates of C2 and C7, and then drawing vertical lines perpendicular to both. The angle formed at the intersection of the vertical lines is the CL. The JPS (▶ Fig. 7.7b) is the intersection of two lines drawn along the posterior vertebral walls of C2 and C7. 10,​11. The HPT (▶ Fig. 7.7c) is calculated by drawing vertical lines parallel to the posterior surfaces of C2 to C7 vertebral bodies, and adding all the segmental angles. 12 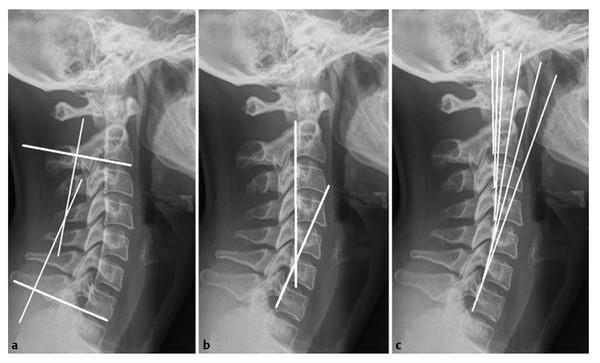