This chapter provides a brief overview of seizures and epilepsy, with emphasis on pathophysiological mechanisms that determine seizure generation and how these differ from the mechanisms underlying paroxysmal neurologic events that are not epileptic in nature. Detailed discussion about the pathophysiology of epilepsy can be found in numerous reviews, so the question arises: why consider this topic in a book that focuses on the practical approach to seizure management? There are two major reasons. First, the choice of antiepileptic drug (AED) is often crucially dependent on the seizure type or epilepsy syndrome, and hence an understanding of the underlying pathophysiology can direct medication choice. Second, burgeoning knowledge of epilepsy genetics is revealing more and more syndromes with specific mutations that determine the seizure phenotype, sometimes suggesting drugs that should or should not be selected. In this chapter, important terms are defined, and some basics of seizure pathophysiology are discussed as an aid for the practicing physician. It is important to recognize that epilepsy is not a singular disease, but is heterogeneous in terms of clinical expression, underlying etiologies, and pathophysiology.

A seizure is a temporary disruption of brain function due to the hypersynchronous, abnormal firing of cortical neurons. Sometimes, the term epileptic seizure is used to distinguish it from a nonepileptic seizure such as a psychogenic (“pseudo”) seizure (Chapter 6), which involves abnormal clinical behavior that might resemble an epileptic seizure but is not caused by hypersynchronous neuronal firing. The clinical manifestations of a seizure depend upon the specific region and extent of brain involved and may include an alteration in motor function, sensation, alertness, perception, autonomic function, or some combination of these. Anyone might experience a seizure in the appropriate clinical setting (e.g., meningitis, hypoglycemia, toxin ingestion), attesting to the innate capacity of a “normal” brain to support epileptic activity in certain circumstances. More than 5% of people will experience a seizure at some point during their lifetimes.

Epilepsy is the condition of recurrent, unprovoked seizures (i.e., two or more seizures). Epilepsy occurs when a person is predisposed to seizures because of a chronic pathological state (e.g., brain tumor, cerebral dysgenesis, or post-traumatic scar) or a genetic susceptibility. Approximately 1% of the population suffers from epilepsy, making it the second most common neurologic disorder (after stroke), affecting more than two million persons in the United States.

An epilepsy syndrome refers to a group of clinical characteristics that occur together consistently, with seizures as a primary manifestation. Syndrome features might include similar seizure type, age of onset, electroencephalogram (EEG) findings, precipitating factors, etiology, inheritance pattern, natural history, prognosis, and response to AEDs. Examples of epilepsy syndromes are infantile spasms, Lennox–Gastaut syndrome, febrile seizures, childhood absence epilepsy, rolandic epilepsy, and juvenile myoclonic epilepsy. Many of these syndromes are discussed in Chapter 21.

Finally, epileptogenesis refers to the events by which the normal brain becomes capable of producing epileptic seizures, that is, the process by which neural circuits are converted from normal excitability to hyperexcitability. This process may take months or years, and its mechanisms are poorly understood. None of the currently available AEDs have robust antiepileptogenic effects. Clearly, the development of antiepileptogenic therapies is a research priority.

Classification of seizures and epilepsies

Epileptic seizures are broadly divided into two groups, depending on their site of origin and pattern of spread. Focal (or partial) seizures arise from a localized region of the brain, and the associated clinical manifestations relate to the function ordinarily mediated by that area. A focal seizure is called “simple” if the patient’s awareness or responsiveness is retained, and “complex” if those functions are impaired during the seizure. Focal discharges can spread locally through synaptic and nonsynaptic mechanisms or distally to subcortical structures, as well as through commissural pathways to involve the whole brain, in a process known as secondary generalization(Figure 1.1). For example, a seizure arising from the left motor cortex may cause rhythmic jerking movements of the right upper extremity; if the epileptiform discharges subsequently spread to adjacent areas and eventually encompass the entire brain, a secondarily generalized tonic–clonic convulsion may ensue.

Figure 1.1. Coronal sections of the brain indicating patterns of seizure origination and spread. (A) Primary generalized seizure begins deep in brain (thalamus) with spread to superficial cortical regions (arrows). (B) Focal onset seizure begins in one area of the brain (star) and may spread to nearby or distant brain regions. (C) A focal onset seizure “secondarily generalizes” by spreading first to thalamus (left panel) then to widespread cortical regions (right panel). 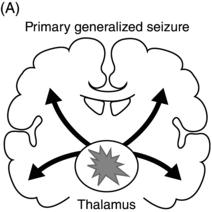 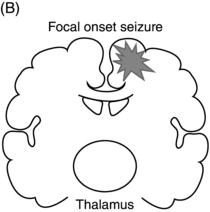 In contrast, in a generalized seizure, abnormal electrical discharges begin in both hemispheres simultaneously and involve reciprocal thalamocortical connections (Figure 1.1). The EEG signature of a primary generalized seizure is bilateral synchronous spike-wave discharges seen across all scalp electrodes. The manifestations of such widespread epileptiform activity can range from brief impairment of responsiveness (as in an absence seizure) to a full-blown convulsion with rhythmic jerking movements of all extremities accompanied by loss of posture and consciousness.

Epilepsy syndromes have been divided historically by etiology (symptomatic vs. idiopathic; the majority of idiopathic epilepsies have a genetic basis) and site of seizure onset (generalized vs. focal or “localization-related”). This classification is being revised based on rapidly accumulating knowledge about the molecular genetic basis of epilepsies and new information gleaned from modern neuroimaging, as well as the realization that many epilepsy syndromes include both focal and generalized seizures. The newer classification scheme (Chapter 2) uses etiologic categories: genetic, structural/metabolic, and unknown. Undoubtedly, this scheme will be refined as further knowledge is gained. From the pathophysiological perspective, some mechanisms are likely to operate across epilepsy categories, and other mechanisms may be specific to certain epilepsy syndromes.

At the cellular level, the two hallmark features of epileptiform activity are neuronal hyperexcitability and neuronal hypersynchrony. Hyperexcitability refers to the heightened response of a neuron to stimulation, so that a cell might fire multiple action potentials rather than single ones in response to a synaptic input. Hypersynchrony reflects increased neuron firing within a small or large region of cortex, with cells firing in close temporal and spatial proximity.

While there are differences in the mechanisms that underlie focal versus generalized seizures, at a simplistic level it is still useful to view any seizure activity as a perturbation in the normal balance between inhibition and excitation in a localized region, in multiple discrete areas (seizure “foci”), or throughout the whole brain (Figure 1.2). This imbalance likely involves a combination of increased excitation and decreased inhibition (Table 1.1).

In addition to the traditional concept of excitation/inhibition imbalance, novel pathophysiological mechanisms for the epilepsies are also being discovered. For example, in febrile seizures, release of inflammatory mediators such as cytokines could contribute to neuronal hyperexcitability, an observation that might open new avenues of treatment.

Many conditions resemble seizures clinically yet have a distinct etiology and therefore warrant treatment other than AEDs. Such seizure mimics are typically paroxysmal and recurrent, like seizures. Representative examples, listed in Table 1.2, illustrate the wide diversity of mechanisms and hence treatment modalities.