Cervical spine deformity can cause significant disability and have negative impact on the quality of life. Patients with deformity in the cervical spine can often present with neck pain, myelopathy, and sensorimotor deficits. Furthermore, patients with severe kyphotic deformity often have difficulty in maintaining horizontal gaze, which can significantly impact the patient’s functional status and limit the ability to perform activities of daily living. Surgical correction of cervical deformities can be challenging, especially in the setting of rigid cervical deformities, which often require osteotomies to obtained adequate correction.

Posteriorly based osteotomy such as pedicle subtraction osteotomy is typically limited to the cervicothoracic junction at C7 or T1, due to the presence of vertebral arteries; and PSO can be technically challenging in this region due to the important innervation of cervical nerve roots. In contrast, the anterior Riew osteotomy, defined as osteotomy through the disc space and uncovertebral joints up to the transverse foramen bilaterally, is a powerful deformity correction technique that can be performed throughout the cervical spine. 1 In addition, it can be performed in conjunction with posterior facet release as needed, which allows for significant kyphosis correction in rigid cervical deformity. Furthermore, asymmetrical anterior osteotomy can be utilized in patients with fixed coronal malalignment such as in cases of “ear-on-shoulder” deformity to gain significant coronal correction.

Preoperative evaluation should include a thorough neurological examination and a comprehensive review of preoperative imaging studies. Any neurological deficits should be clearly documented and correlated with imaging findings to identify potential symptomatic neural compression. Decompression of these neural elements should be included in the overall treatment plan. Neurological exam findings that are not congruent with imaging findings warrant further workup to rule out non–spinal-related etiology such as peripheral neuropathy and various nerve entrapment syndromes. Useful preoperative imaging modalities include AP/lateral/oblique/dynamic cervical X-rays, scoliosis film, computed tomography (CT), and magnetic resonance imaging (MRI). Cervical X-rays are helpful in assessing the severity of deformity, location of the apex, flexibility of the deformity, as well as presence of any bony foraminal stenosis on oblique views. Scoliosis films can provide information regarding global balance, as some cervical deformities are related to concurrent thoracolumbar deformities. CT is very useful in determining location of preexisting bony fusion, and MRI is the modality of choice in assessing neural compression. If MRI is contraindicated, or has too much artifact from existing instrumentation, CT myelogram can be obtained instead.

Relevant radiographic parameters including cervical lordosis, chin–brow vertical angle (CBVA), C2–C7 sagittal vertical axis (SVA), and T1 slope should be measured on preoperative imaging. The desired amount of correction in both sagittal and coronal planes should be determined based on each patient’s symptomatology, unique medical circumstances, and individual needs. The flexibility of the deformity can be assessed on lateral dynamic cervical X-rays; thin-cut CT can be obtained to evaluate for the presence of ankylosis anteriorly or posteriorly. If the facets are fused in addition to the anterior column ankylosis, then a posterior facet release and instrumentation are required to gain adequate deformity correction in conjunction with anterior osteotomy.

In patients with previous anterior cervical spine surgery, the vocal cord function should be assessed preoperatively by an otolaryngologist. If vocal cord dysfunction is already present, the cervical spine should be approached from the ipsilateral side as the prior surgery to avoid potential bilateral vocal cord paralysis. If the vocal cord function is normal, then a left-side approach is generally preferred, due to the longer course of the left recurrence laryngeal nerve and the theoretically lower risk of iatrogenic nerve injury. In patients with significant coronal deformity, approaching the cervical spine from the convex side is generally easier. Furthermore, the course of the vertebral arteries must be carefully studied on preoperative imaging studies to avoid inadvertent injury.

Anterior osteotomy can be used to treat rigid deformities in both coronal and sagittal planes, such as “chin-on-chest” and “ear-on-shoulder” deformities. By removing the uncinate processes bilaterally, the anterior spinal column is released and correction of the rigid deformity is then possible. If posterior facet fusion is present, anterior osteotomy can be combined with posterior facet release to achieve deformity correction; this is achieved by placing standalone anterior grafts with one single screw or a buttress plate anteriorly, so that additional correction can be obtained after posterior release.

The patient is brought into the operating room and undergoes general endotracheal intubation. Neuromonitoring is established and baseline signals are obtained in patient with spinal cord compression. In patients with kyphotic deformity, cervical traction with Gardner-Wells tongs (usually 15 lb) can be applied to facilitate intubation and the initial approach to the anterior cervical spine. If the cervical kyphosis is severe, the head may be suspended in the air during the initial positioning; in this situation, folded sheets can be stacked together to help in supporting the head at the beginning of the case. After the anterior osteotomy, the head has to be pushed back toward the table to correct the kyphosis. Therefore, it is critical that it is initially positioned off the table adequately to allow for posterior migration. In general, we position the head such that it is approximately 30 to 40 cm off the table, depending on the magnitude of the deformity. Exposure of the apex of the kyphotic deformity can be challenging, since it is deep in the wound. In patients with cervical spinal cord compression, the mean arterial pressure (MAP) should be kept above 80 mm Hg to maintain adequate cord perfusion not only during intubation but also throughout the procedure.

After positioning the patient supine on the operating table, the neck is prepped and draped in the usual sterile fashion. A microscope is draped and used throughout the case. The anterior cervical spine exposure is obtained via the standard Smith–Robinson approach, and the spinal levels are confirmed with fluoroscopy. The longus colli muscles are detached from their insertion sites bilaterally at the midvertebral body using bipolar cautery, and table-mounted retractors are inserted under the longus colli cuff to maintain exposure. Anterior osteophytes are removed with Leksell rongeurs or a high-speed burr. Caspar pins are placed at the level with intended anterior osteotomy. Two sets of pins can be used if the bone quality is osteoporotic for additional purchase. The pins are placed perpendicular to the anterior plane of the spine, resulting in divergent pins alignment in a kyphotic spine. Additional lordosis can be gained with this pin placement as the pins are distracted after the osteotomy (▶ Fig. 10.1).

The osteotomy is performed using a high-speed 2.5-mm matchstick burr. For kyphotic deformities, bony resection should be kept perpendicular to the cervical spine in the same space as the former disc space to prevent asymmetrical resection in the coronal plane. For mixed coronal and kyphotic deformities, asymmetrical bony resection can be made on purpose to correct both the coronal and sagittal deformities. The dorsal limit of bony resection is up to the posterior longitudinal ligament. The lateral aspect of the bony resection is performed carefully in a step-wise fashion with extreme caution, in order to prevent iatrogenic vertebral artery injury. First, Penfield nos. 4 and 2 dissectors are used to dissect lateral to the uncinate processes. The Penfield no. 2 is then kept in place lateral to the uncinate process during the lateral bony resection to demarcate the lateral border and to protect the vertebral artery (▶ Fig. 10.2). Once the bone is resected close to the lateral border, the remaining thin shell of bone can be broken off using a microcurette. Bilateral anterior foraminotomies are typically performed to prevent nerve root compression when the cervical spine is extended during deformity correction.

After the osteotomy is complete, the anesthesiologist can help remove sheets initially placed under the head one-by-one, while surgeon exerts gentle downward force on the forehead through the sterile drape (▶ Fig. 10.3). In addition, an intervertebral spreader or a Cobb elevator can be placed within the osteotomy site for additional distraction along with the Caspar pins during kyphosis correction (▶ Fig. 10.4). Alternatively, sequentially larger sizes can be used to help open up the disc space. Pushing down gently on the forehead provides the most biomechanical leverage with the least amount of risk for Caspar pin loosening and vertebral body fracture during kyphosis correction. Partial kyphosis correction can often be obtained even if there was prior posterior instrumentation, since most cervical rods will be bent into less kyphosis with this maneuver. Even with a solid posterior fusion with 3.5-mm titanium rods, it is often possible to get partial correction of the deformity, as the fusion mass and the posterior instrumentation will flex a few degrees. However, if 3.5-mm cobalt chromium rods were utilized posteriorly and there is a solid fusion, one can get only minimal correction after the anterior osteotomy and the rest of the correction has to be done posteriorly. When the head touches the operating table, the anterior part of the kyphosis correction is then complete. If additional kyphosis correction is necessary, one can ask the anesthesiology team to place folded sheets under the shoulders to lift the head off of the table such that it can be pushed further posteriorly. Cervical traction with Gardner-Wells tongs can be increased to 25 lb to maintain the correction if needed.

Next, bone graft is inserted into the distracted osteotomy site. Since the bone edges in the osteotomy site are usually cancellous, there is a high chance of graft subsidence; thus, it is important to fit the largest bone graft possible into the osteotomy site to provide the maximum amount of surface area possible for endplate support. If adequate deformity correction has been obtained, then an anterior cervical plate with fixed angle screws is placed; if additional posterior correction is required, then a trapezoid-shape bone graft (contacting the anterior but not the posterior aspect of the osteotomy site) is used, so that further lordosis can be achieved with posterior compression. A buttress plate or an interference screw is used to prevent graft extrusion during the posterior portion of the procedure when the patient is prone (▶ Fig. 10.5). More commonly, we now tend to use a standalone cage fixed with a single screw, which keeps the cage in place and allows for further correction posteriorly. 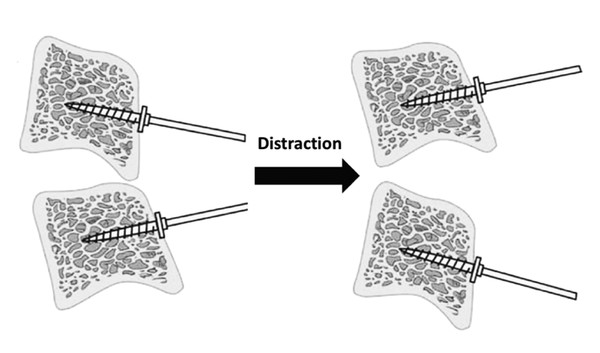 Fig. 10.1 The Caspar pins are placed perpendicular to the anterior surface of the kyphotic cervical spine initially, and distraction of the pins maximizes the amount of lordosis obtained through the anterior osteotomy.