Upper thoracic osteotomy, which is less common than cervical and thoracolumbar osteotomy, can be performed for correction of cervicothoracic junction (CTJ) kyphosis and proximal junctional kyphosis (PJK) after thoracolumbar fusion. Osteotomy at the upper thoracic spine may provide more effective correction of sagittal balance than cervical osteotomy in selected cases and may be performed from T1 to T5, depending on the deformity. 1,​2,​3,​4

The definition of the CTJ varies. It is typically considered the region from C7 to T1 but can be extended to include C6–T4. 5,​6,​7,​8 Compared with kyphotic deformity in the cervical spine, CTJ kyphosis causes greater sagittal imbalance of the cervical spine and more severe clinical problems, including chronic neck pain, inability to achieve a horizontal gaze, and difficulty maintaining hygiene and swallowing. Conventional approaches to CTJ kyphosis correction are lengthening of the anterior column and/or shortening of the posterior column. Although the anterior approach to the cervical spine is easier and safer (to avoid spinal cord and nerve root injuries), access is challenging because of the complex vascular and bony anatomy of the CTJ. In addition, the anterior approach may be impossible in patients with severe kyphotic deformity in the CTJ.

McClendon et al 2 reported a mean correction of 31 degrees for proximal junctional angles after multilevel SPO for PJK of the upper thoracic spine. Their series consisted of multilevel SPO in six cases and VCR in one case.

In a 2015 multicenter study, Theologis et al 4 compared lower cervical osteotomy with upper thoracic osteotomy (T1-T5) for CTJ deformity in 48 patients. They performed PSO or VCR in 24 patients each, C7 osteotomy in 15 patients, and upper thoracic osteotomy in 33 patients (at T1 in 4 patients, T2 in 7, T3 in 9, T4 in 9, and T5 in 4). They reported significant improvements in cervical sagittal vertical axis (SVA), cervical lordosis (CL), Neck Disability Index score, and Scoliosis Research Society domains in both groups, with no significant differences between groups. Reoperation rates were also similar between groups. Indications were not specified. The mean correction of the C2-T1 angle was 44 degrees in the C7 PSO group and 26 degrees in the upper thoracic osteotomy group. Compared with the C7 PSO group, the upper thoracic group had significantly higher changes in T1 slope (20 vs. 3.6 degrees) and SVA correction (2.5 vs. -1.3 cm).

Traditionally, the ideal level of osteotomy was considered to be the apex of the deformity. However, spinal osteotomy outside the deformity may be considered for the following reasons: (1) to achieve safer correction at a level where the spinal canal is wider (e.g., C7 or T1 PSO instead of C5 or C6 PSO) or at the level of cauda equina rather than a level of the spinal cord (e.g., L2 or L3 PSO instead of T11, T12, or higher PSO); (2) to achieve more correction angle with the same amount of bone resection (e.g., larger correction angle in SVA at L3 or L4 vs. L1 or L2); or (3) to achieve correction when the deformity involves a transitional area such as the cervicothoracic, thoracolumbar, or lumbosacral segments.

14.3.1 Global Spinal Alignment and Fusion Status of the Cervical Spine

All patients should undergo detailed preoperative radiographic imaging studies, including standing 36-inch anteroposterior and lateral radiographs, as well as routine cervical, thoracic, and lumbar spine radiographs. An additional lateral radiograph including the chin–brow line is needed for patients with severe sagittal imbalance. Computed tomography (CT) and magnetic resonance imaging (MRI) are necessary to evaluate ossification, fusion, and possible spinal canal stenosis with foraminal stenosis. Like all cervical spine deformities, global spinal alignment, including C7 SVA and chin–brow vertical angle (CBVA) should be evaluated. If the cervical deformity is not fixed, C7 SVA and CBVA are less important because compensatory changes will occur in the cervical spine after corrective osteotomy. However, when the patient’s cervical spine has been fused surgically or by ankylosing spondylitis or diffuse idiopathic skeletal hyperostosis, measuring the preoperative CBVA is critical. Overcorrection of the cervical deformity can result in an upward gaze, which is less favorable than undercorrection for activities of daily living such as eating, reading, and walking down stairs. 9

TK, typically measured from the T4 upper endplate to the T12 lower endplate, is one of the baseline angles of thoracic spine alignment. The normal range for TK is 20 to 70 degrees, depending on the patient’s age and lumbopelvic alignment, including lumbar lordosis (LL), pelvic incidence (PI), and sacral slope. 10,​11 T1 slope is the angle created by the upper endplate of T1 and the horizontal plane; it is one of the most important parameters, providing the mechanical base of the cervical spine. Patients with a high T1 slope require more CL to obtain a horizontal gaze, and vice versa. Normal values range from 22 to 31 degrees. 12,​13

Cervicothoracic angle (CTA) includes both lordotic segments of the lower cervical spine and kyphotic segments of the upper thoracic spine. Normal values of CTA, which is measured from the C6 upper endplate to the T4 lower endplate, have been reported as ranging from 3.9 to 7.2 degrees, with a mean of 4.9 degrees of kyphosis in the middle-aged population; CTA can increase to 23 degrees in those older than 75 years. 7,​8 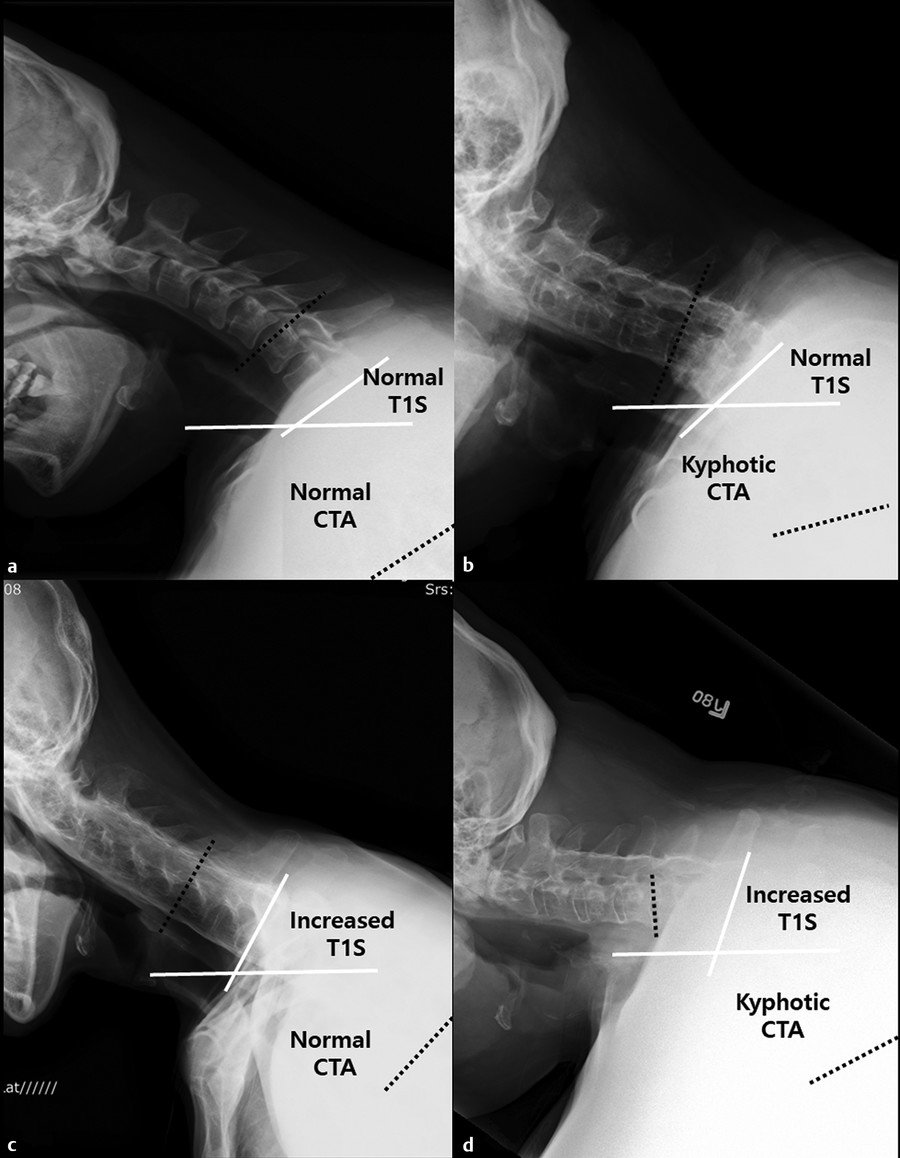 Based on the concept of T1 slope, T1 slope minus CL (or C2–C7 angle) is another parameter that reflects the balance between CL and T1 slope to provide information on cervical spine sagittal balance. 12,​13,​14 It is similar to the concept of PI minus LL in lumbopelvic balance. In the same way that high PI requires a more lordotic lumbar spine to achieve sagittal balance, high T1 slope requires more CL to achieve a horizontal gaze and balanced SVA. Several studies report the ideal value of T1 slope minus CL as 15 degrees and define cervical spine deformity as T1 slope minus CL greater than 20 degrees. 12,​14 C2–C7 SVA influences health-related quality-of-life and patient-reported outcomes after surgical treatment. C2–C7 SVA less than 4 cm is associated with disability according to the Neck Disability Index (▶ Fig. 14.2). 12,​14,​15

Although many studies have analyzed the importance of T1 slope to cervical spine alignment, there are several alignment parameters unexplained by T1 slope alone. First, T1 slope is the angle between the upper end of T1 and the horizontal plane, but is not a constant parameter because it is influenced by global posture. When the patient is sitting, leaning, supine, or prone, TK and T1 slope cannot be used as a predictive parameter for CL. In other words, T1 slope, like sacral slope, is a changing parameter rather than a constant parameter.

Anatomically and biomechanically, the cervical spine and cranium are placed on the TIA, a bony circle without range of motion consisting of the T1 vertebral body, the first ribs on both sides, and the upper part of the sternum. The sagittal balance of the cranium and cervical spine, integral to maintaining an upright posture and horizontal gaze, is influenced by the shape and orientation of the TIA in a similar manner to PI in the pelvis. Moreover, important musculature of the neck, including sternocleidomastoid, scalenes, and strap muscles, inserts on the thoracic inlet and several other important cervical paraspinal muscles. TIA is a constant parameter, unaltered by changes in TK. Normal TIA is 70 to 80 degrees. 8,​13,​16 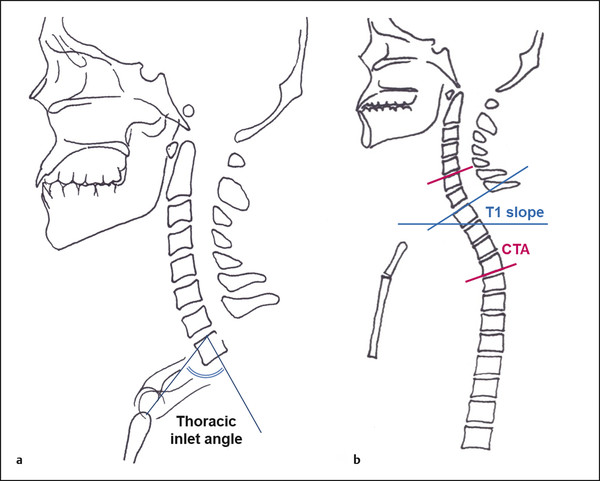 Fig. 14.2 Schematic drawing of radiographic measurements of (a) thoracic inlet angle and (b) T1 slope and cervicothoracic angle (CTA). 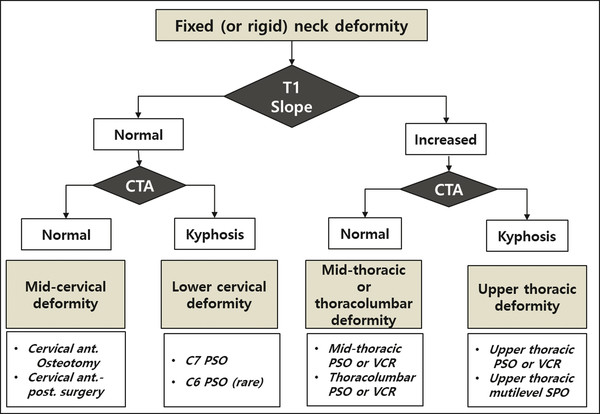