What Can the EEG Tell Us?

What Can the EEG Tell Us?

The electroencephalogram (EEG) measures the difference in voltage between pairs of electrodes placed in an array across the scalp (and, in some cases, directly upon or within the brain). During the long history of EEG – the first animal recording was performed by Canton in 1874 and the first human recording by Berger in 1924 – its role has evolved along with clinical and technical changes in neurology.

Electroencephalography has two general purposes. The first is the evaluation and treatment of epileptic seizures. The second is the assessment of encephalopathy. In these roles, the sensitivity and specificity of EEG diverges.

Electroencephalography carries a high specificity in epilepsy; the cardinal findings in the epileptic patient are difficult to mistake for others and are seldom seen in conditions outside of epilepsy. However, the sensitivity of EEG (technically, its positive predictive value) – its ability to confirm epilepsy in those who have it – is limited. Therefore, many techniques and technologies have arisen in EEG to help elicit epileptic abnormalities to help clinicians sort through the differential diagnosis of epilepsy.

Conversely, in encephalopathy, the EEG has high sensitivity and low specificity. The EEG is exquisitely sensitive in both detecting and reflecting the severity of encephalopathy but has little ability to distinguish among the myriad causes of encephalopathy.

The purpose of this chapter is to focus on the current clinical utility of the EEG applied to epilepsy (and its mimics) and encephalopathy.

SCIENCE REVISITED
The physiology of the EEG can be summarized as follows, working from the neuronal level upwards:

SCIENCE REVISITED
The basic engineering principles of the EEG:

The interictal epileptiform discharge (IED), otherwise known as the spike or sharp wave, is the critical finding in EEG in the evaluation of possible epilepsy. The colloquial definition of an IED is also the most memorable: an IED is any waveform that would hurt if sat upon. A more official definition is that an IED is a waveform that has a duration of 20–200 ms, has a “field” (meaning its distribution across different EEG channels indicates a cerebral rather than artifact or non-brain origin), interrupts rather than forms ongoing activities, and frequently features an aftercoming slow wave with the same polarity (Figure 7.1A). IEDs can occur singly (Figure 7.1A), in a burst of polyspike–wave discharges (Figure 7.1B), or in more than one location (independent multifocal spikes, Figure 7.1C).

CAUTION!
Not all waveforms with sharp morphology are associated with epilepsy. Some artifacts, such as electrical pops and patient movements, can appear sharp (Figure 7.2A). Benign epileptiform transients are a group of findings, typically occurring during drowsiness or light sleep, that appear epileptiform but have no clinical significance. Rhythmic midtemporal theta activities of drowsiness (RMTD, Figure 7.2B), sometimes called psychomotor variant, are one of the more common. These discharges appear in the midtemporal region. Unlike spikes seen in temporal lobe epilepsy, these appear V-shaped (rather than with the sharp upslope and following slow-wave discharge of the spike), do not necessarily interrupt ongoing activities but often appear in conjunction with ongoing activities, usually appear more or less equally on both sides, and are exquisitely state dependent, meaning that they disappear with awakening or with deeper sleep. Wickets are a related pattern, consisting of sharply contoured midtemporal theta activity that may be mistaken for epileptiform discharges, particularly when occurring as single isolated waves. Benign epileptiform transients of sleep (BETS, or small sharp spikes, Figure 7.2C) similarly appear limited to drowsiness or light sleep. These consist of very small–amplitude, short duration waveforms that have broad, difficult-to-localize distributions, and like other benign epileptiform findings, these lack the typical morphology and “interruptiveness” of true spikes. Six- and fourteen-hertz positive bursts are waveforms featuring sharply contoured fast activities often superimposed upon or commingled with slower, sharply contoured theta activities (Figure 7.2D). 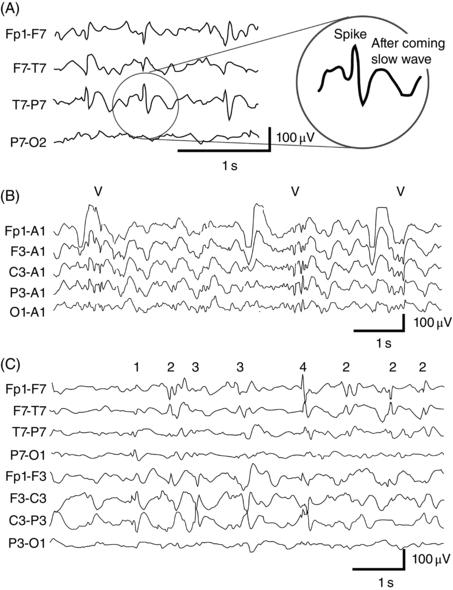 The ictal discharge, in its broadest definition, is any paroxysmal burst of activity that (1) interrupts ongoing EEG activity, (2) evolves (gradually changing in morphology, spatial distribution, or frequency), and (3) involves activity that is often but not obligately sharp. Focal seizures arise from one specific region (Figure 7.3A), and generalized seizures from the entire head (Figure 7.3B). When the ictal discharge accompanies clinical behaviors such as staring, behavioral interruption, confusion, or falling and shaking, then the EEG and behavior are together diagnostic of an epileptic seizure.

Specificity and sensitivity in epilepsy

Unlike the capture of an epileptic seizure that confers diagnostic surety, IEDs provide diagnostic inference only on the evaluation of a patient with spells. Evaluating the specificity and sensitivity of the scalp EEG in the diagnosis of epilepsy is difficult because findings depend on the sample, the population from which it was selected, and technical details of the recordings.

Nevertheless, the probability of finding an IED during a single routine EEG in patients with known epilepsy is approximately 50%. Repeating routine studies increases sensitivity but with gradually diminishing returns, eventually attaining a ceiling of 80–85% after the fourth recording. At this point, even more prolonged recordings, such as overnight video–EEGs, may not be of further utility. This means that about one-fifth of patients with epilepsy will lack interictal evidence of epilepsy. The variable sensitivity of IEDs in patients indicates that a lack of IEDs should not be taken as definitive evidence against seizures.

Figure 7.2. Examples of artifacts or other sharply contoured discharges that may mimic epileptiform activity. (A) Electrical artifacts from a poorly adherent F7 electrode (marks). (B) A burst of rhythmic, midtemporal sharp discharges occurring during drowsiness (RMTD), one of the more frequent benign sharp findings seen during drowsiness or light sleep. (C) BETS or small sharp spikes (marks). (D) Six- and fourteen-hertz spikes. Note that most benign epileptiform discharges usually occur during drowsiness or light sleep, and one of the tests is to observe whether the putative abnormalities persist into wakefulness or deeper sleep. 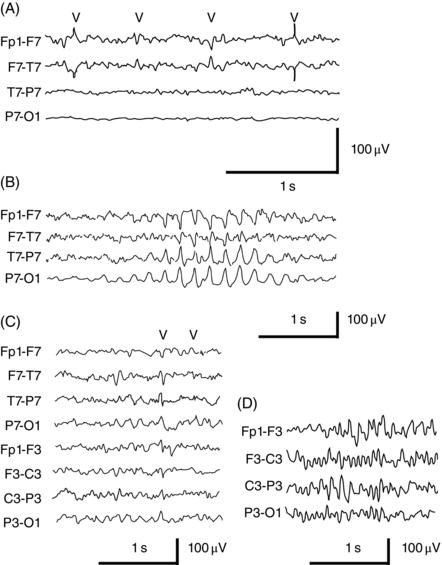 Tags: Epilepsy
Mar 12, 2017 | Posted by admin in NEUROLOGY | Comments Off on What Can the EEG Tell Us?
Premium Wordpress Themes by UFO Themes
WordPress theme by UFO themes