Functional Anatomy of the Spine

Chapter 5 Functional Anatomy of the Spine

The spine is a complex structure with bony, ligamentous, muscular, and neurologic components. Knowledge of the anatomy and associated pathology of the spine is essential for treating patients with spinal disorders. The focus of this chapter is to develop an understanding of the anatomic and more specifically the functional relationships between these components.

Overview of the Vertebral Column and Spinal Cord

The human spinal column consists of 33 vertebrae separated into five anatomic regions. These regions include 7 cervical (C1-7), 12 thoracic (T1-12), 5 lumbar (L1-5), 5 sacral (S1-5), and 4 coccygeal bones (Fig. 5-1). In utero development plays a large part in the formation of the adult spine, contributing to the primary curvatures: kyphosis in the thoracic and sacral regions. Late in utero, after the development of the primary curvatures and continuing through early childhood, the secondary curvatures of the spine develop (Fig. 5-2). The cervical and lumbar lordosis becomes significant because of the gravitational forces created by the weight of the head and upright posture.1 The positions taken by the cervical and lumbar spine allow for horizontal gaze while standing in an upright posture.

FIGURE 5-1 A dorsal view of the spine demonstrating the cervical, thoracic, and lumbar regions. 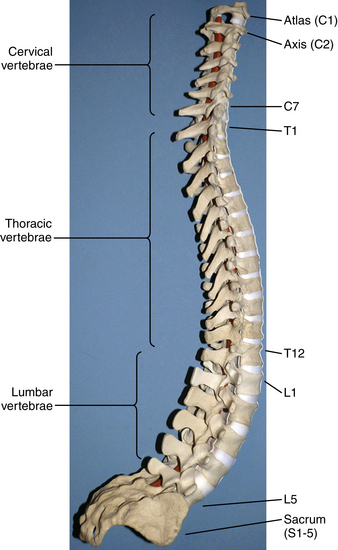 FIGURE 5-2 A lateral view of the spine demonstrating the cervical, thoracic, and lumbar regions. The primary thoracic kyphosis and secondary cervical and lumbar lordosis are illustrated.

The development and maintenance of spinal anatomy and posture are not static and vary individually. Variations with intervertebral discs and vertebral bodies can be potentiated by congenital anomalies, age-dependent vertebral changes and osteophyte formation, traumatic injuries, neurologic disorders, and paraspinal muscle imbalances. Commonly occurring variations include sacralization of the fifth lumbar vertebra or lumbarization of the first sacral vertebra, Klippel-Feil anomaly in the cervical spine, and anomalous nerve root anatomy. A myriad of reactive changes may be seen as a response to spinal deformity. The flexibility of the spine may allow a patient to compensate for a deformity in one region with a change in curvature in another. However, a deformity may become so profound that an individual may be severely disabled.

The flexibility of the spine varies from region to region and is based on anatomic constraints. The cervical spine offers the greatest flexibility because of the requisite mobility of the head. This is in contrast to the rigidity of the thoracic spine due to its association with the chest wall.2 Unique articulations in the cervical region afford flexibility such as those found between the skull-atlas and atlas-axis (C1-2). Flexibility at other regions of the spine is influenced by cartilaginous discs between vertebral bodies and apophyseal joints found dorsal to the vertebral arches, all developed in a manner to provide optimum stability, flexibility, and mobility. The center of gravity of the spinal column and that of the body do not pass through the same points. The former begins cranially at the odontoid process of the axis and passes caudally through the sacral promontory.3 The latter passes ventral to the sacral promontory caudally. Disability may occur if the center of gravity deviates from the normal position. Studies have found that when the center of gravity passes too far ventral to the sacrum so the work required to maintain erect posture is significantly increased, lumbar muscle fatigue and pain result.

Normal physiologic function is supported by the ligaments and joint capsules of the spine. The ligaments of the spinal column are composed of elastin and collagen3,4 and may span several segments. The anterior longitudinal ligament (ALL) spans the entire length of the spinal column, extending from the ventral border of the foramen magnum (basion), where it is known as the anterior atlanto-occipital membrane, to the sacrum. The ALL spans 25% to 33% of the ventral surface of the vertebral bodies and intervertebral discs, supporting the annulus fibrosus and preventing hyperextension. The ALL is arranged in three layers: the outermost spanning four to five levels, the middle layer spanning three levels and connecting vertebral bodies and intervertebral discs, and the innermost layer binding adjacent vertebral discs. The posterior longitudinal ligament (PLL) begins as the tectorial membrane at C2 and extends to the sacrum. The PLL runs within the vertebral canal and flares at the level of the intervertebral disc where it is interwoven with the annulus fibrosus and narrows at the vertebral bodies, where it is loosely attached. The layers of the PLL are similar to the ALL but function to prevent hyperflexion.

The spinal cord is a 40- to 45-cm long structure extending from the foramen magnum to the L1-2 spinal level. The cord transitions at this point into a collection of nerve roots known as the cauda equina. Spinal nerve roots exit neural foramina and consist of a dorsal sensory and ventral motor root, with the exception being C1 and C2 contributions to the spinal accessory nerve. The outermost membranes, or meninges, which cover the spinal cord, are the dura, arachnoid, and pia—the innermost layer of the meninges. Suspension of the spinal cord is accomplished by the dentate ligaments, which interconnect the innermost pia with the outermost dura matter. The spinal cord is divided into regions much like the spine: 8 cervical, 12 thoracic, 5 lumbar, and 5 sacral regions and 1 coccygeal region. The nomenclature of the nerve roots is as follows: the first seven cervical nerves exit above their named vertebrae, with the eighth cervical nerve and all spinal nerves below exiting below their named vertebrae.

The spinal cord is part of the central nervous system and like the brain it is mapped in a somatotopic arrangement. The corticospinal tracts are responsible for motor function. Within these tracts control of the hands is found medially and control of the feet is found laterally. The spinothalamic tracts transmit sensory information, with hand sensation found ventromedially and sacral sensation dorsolaterally. Lumbar regions of the posterior columns of the spinal cord have sacral segments located medially and upper lumbar regions laterally.

Spinal canal dimensions provide adequate space for the spinal cord in all segments except for the midthoracic region. Here, the risk of neural tissue impingement during surgical instrumentation is increased. The lumbar region has a consistent spinal canal size and, along with the cauda equina, the anatomy functions to limit nervous tissue damage due to trauma or degenerative changes.5

Decreases in canal dimensions may result in radiographic and clinical spinal stenosis. These decreases in canal size may be either congenital, generally presenting at a younger age, or acquired, presenting at a later age due to degenerative changes. Stenosis is a self-perpetuating loop often beginning with disc degeneration leading to alterations in mechanical stress that cause facet joint degeneration and ligamentous changes, with an end result of a decrease in the canal space. Spinal stenosis may lead to changes in intradural pressure that diminish the blood flow to nerve roots and alter axonoplasmic flow. Acute nerve root constrictions have substantial edema, which can slow electrical conduction and nutrient transport and which are more substantial than chronic conditions. There is also an inflammatory component to stenosis that alters neuropeptide concentrations.

The intricate design of the vertebrae provides stability to the spinal column along with support and protection for the spinal cord and associated nerve roots. The compressive forces are significant in a stacked column, and the cortical lamellae are arranged vertically to aid in resisting these forces. The cancellous bone found in the inner trabeculae allows for a compromise between strong mechanical support and limiting vertebral weight. All of the structures coincident with the vertebral bodies act to bear weight in compression. The anterior column functions to transfer body weight to the pelvis while standing in an erect posture. Dorsal elements of the spinal column serve to protect the spinal cord. The dorsal elements also function as a tension band and a lever, transferring muscular contractions of the paraspinal musculature through the anterior and middle columns of the spine.

The dorsal bony elements include the pedicles, which arise from the superior aspect of the vertebral body and form the lateral walls of the spinal canal. The laminae extend from the pars interarticularis and fuse to form the dorsal wall of the spinal column. The junction of the laminae, where the spinous processes arise, support functional stability of the spine with their ligamentous and muscular attachments. The relationship between the transverse processes and the dorsal elements is unique to the specific spinal region where they are found. Cervical transverse processes arise from the junction of the vertebral body and pedicle. The shape of cervical spinous processes are bifid, resulting in the great flexibility of the cervical region. Thoracic and lumbar transverse processes have a different anatomic relationship with the dorsal elements, arising from the junction of the pars interarticularis and pedicle. Stability and motion to the spine are also provided by transverse processes with their unique ligamentous and muscular attachments.

The first cervical vertebra is unique in its articulation with the occipital condyle of the cranium. This articulation is the basis for significant flexion and extension of the head. Another unique aspect of the atlas is that although it lacks a true ventral body it still supports the cranium by the superior facet surfaces of the lateral masses (Fig. 5-3A). The caudal facet surfaces of the lateral mass articulate with the superior facets of the axis (Fig. 5-3B). The transverse process of the atlas houses the vertebral artery within the transverse foramina. Superior and inferior oblique muscles attach to the transverse process. The atlas is hydrostatically held between the cranium and axis. The anterior and posterior occipital membranes attach to the atlas and also contribute to stability. They are continuations of the anterior longitudinal ligament and ligamentum flavum, respectively. 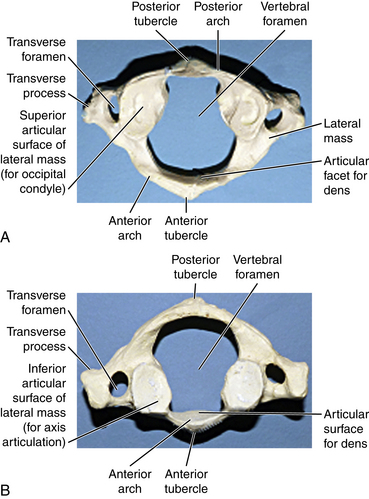 FIGURE 5-3 The anatomy of the atlas (C1) demonstrating its unique osseous anatomy with noted lack of an anterior body and large lateral masses. Superior (A) and inferior (B) views.