Lumbar fusion procedures have become increasingly common in the treatment of degenerative conditions of the lumbar spine. The use of interbody cages to add structural stability and to improve fusion rates has become more common over time. It has been demonstrated biomechanically that the most effective means of eliminating motion between two vertebrae is through the disc space rather than the facet joints, transverse processes, or spinous processes.1 Traditionally, dorsolateral fusion has been associated with a higher pseudarthrosis rate than has a circumferential fusion. Furthermore, it has been shown that posterolateral fusion does not completely achieve immobilization of the motion segment despite the presence of a solid dorsolateral fusion.2 This result makes intuitive sense, as 80% of spinal loads are transmitted through the anterior column.

Interbody fusion procedures offer several potential advantages: The interbody grafts are placed in the weight-bearing position with fusion-promoting forces (Wolff’s law): There is an increased surface area for fusion, and there is good blood supply after decortication of the vertebral end plates; the neural foramina are increased in height and diameter, thus relieving compression of nerve roots; and the disc, which may be a source of pain, is removed. Furthermore, proponents of interbody fusion argue that disc height and lumbar lordosis are restored, thereby improving overall sagittal balance. Most patients with degenerative conditions of the lumbar spine affecting one or two levels do not have significant sagittal imbalance. However, if segmental lordosis is not restored at each level at the index operation and those segments are fused in a hypolordotic position, future adjacent segment degenerative changes may compound the problem and may ultimately result in a flat back deformity.

Despite the aforementioned theoretical advantages of anterior column fusion, it is not yet clear whether clinical outcomes are improved in comparison with a dorsolateral fusion alone. The disadvantages of including an interbody device include the added cost; increased operative time; the risk of neurologic injury due to nerve root or dural sac retraction; and the long-term, potentially deleterious, effects of complete immobilization of a motion segment on the adjacent lumbar levels. One study found that at long-term follow-up (average 14 years), clinical outcomes were not correlated with disc height after ventral fusion using tricortical iliac bone.3 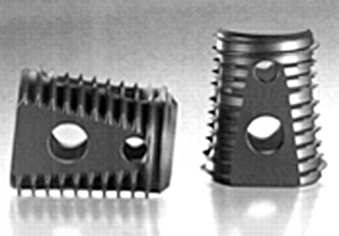 One purported advantage of interbody fusion is the ability to obtain indirect decompression by increasing the size of the neural foramina. However, a recent study found that while an anterior lumbar interbody fusion (ALIF) restored foraminal height by 18.5% and lumbar lordosis by 6.2 degrees, transforaminal lumbar interbody fusion (TLIF) decreased foraminal height by 0.4% and decreased lumbar lordosis by 2.1 degrees.4 This decrease may be due to subsidence of the cage into the end plates. Also, after insertion of the cage from the dorsal approach, many surgeons apply compressive force across the pedicle screws to lock in the cage, and this may lead to a decrease in foraminal height.

In the standing position, 80% of spine loads are transmitted through the anterior column.5 The implant or graft must be capable of withstanding these loads to allow fusion to occur. Early on, autologous bicortical iliac crest autograft was the gold standard, supplemented with a screw and washer to keep the graft in place. However, high rates of pseudarthrosis, graft collapse, migration, and loss of correction were observed with the use of autologous iliac crest alone.6–11 Lumbar interbody cages have become more popular because of the high rate of pseudarthrosis associated with use of interbody bone graft alone.12,13 A cage provides immediate rigid axial mechanical support and stability postoperatively, allowing the graft material inside the cage as well as surrounding the cage to form a solid biologic fusion. There are a number of options to provide anterior column support, including fibular allograft, vascularized autograft (usually rib or fibula), vertical mesh cages (e.g., Harms cage; Fig. 56-3), carbon fiber cages (Brantigan cage; Fig. 56-4), cylindrical threaded cages (BAK, LT cages), and polyetheretherketone (PEEK) cages. 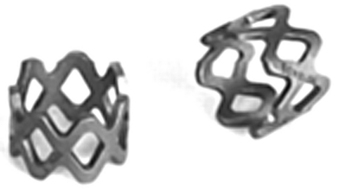 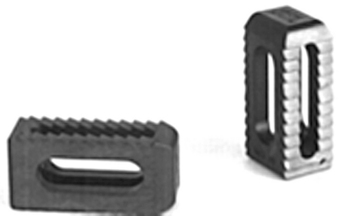 Anterior lumbar interbody fusion may be achieved with a stand-alone cage or supplemented with dorsal instrumentation. At present, there is no industry consensus for performing one procedure over the other. Proponents of the stand-alone ALIF contend that an exclusively ventral approach allows for superior preparation of the fusion surfaces while preserving the dorsal elements,14 which avoids perioperative morbidity related to the dissection of the spinal muscles and complications from the dorsal instrumentation.15 On the other hand, advocates for dorsal instrumentation assert that supplementary dorsal stabilization increases system constraint, creating an environment that is more conducive to fusion.16

A number of biomechanical studies have investigated the stabilization provided by stand-alone ALIF cages versus those supplemented with dorsal instrumentation. In general, stand-alone interbody cages significantly reduce flexion and lateral bending compared to intact spines.14,17,18 Constraint of axial rotation, however, has not been as successful,14,16,19,20 although studies suggest that ALIF procedures generate better stabilization in torsion than does posterior lumbar interbody fusion (PLIF).21 Regardless of the surgical approach, interbody cages do not stabilize in extension,18,21–23 although it is unclear whether the lack of stabilization in extension is clinically relevant and should warrant dorsal instrumentation.21

It is widely accepted that supplementary dorsal instrumentation further increases range of motion constraint and stiffness in one or more planes compared to stand-alone ALIF cages.16,18,19,23 However, the constraint parameters that are ideal for facilitating fusion have not been defined. If supplementary dorsal instrumentation is required to achieve a stable environment for fusion, the advantages of ALIF over dorsal procedures are lost.

Clinical studies comparing stand-alone interbody cages and cages with dorsal stabilization have been equivocal. Fusion rates of between 82% and 98% have been reported for both procedures,24,25 and patient satisfaction rates have also been similar between stand-alone and circumferential procedures. In a study of 71 patients who underwent stand-alone ALIF with bilateral low-profile interbody fusion cages, the overall fusion rate was 86% with an average time to fusion of 10 months. While the single-level fusion rate was 93%, the rates for two- and three-level procedures were lower, at 55% and 67%, respectively. This is consistent with other published data reporting fusion rates for both ALIF and PLIF procedures of around 90% to 94%, with lower fusion rates for multilevel procedures. This may suggest that stand-alone procedures are most beneficial for single-level fusions.24

Additionally, Greenough et al. concluded that ALIF for a single level was associated with significantly less perioperative morbidity than were dorsolateral fusion and instrumentation, although he did not find a significant difference in clinical outcome between the two approaches.15 Nichols et al. found that the addition of a ventral plate to ALIF provided stability similar to that of supplemental dorsal fixation, with dorsal fixation providing only additional constraint in lateral bending.26

The concept of interbody fusion was first introduced in the 1940s by Ralph Cloward, who pioneered the posterior lumbar interbody fusion technique. Toward the end of the 1970s, Dr. George Bagby introduced the stainless steel basket as an adjunct to spinal arthrodesis. He implanted a cervical interbody cage made of stainless steel in a racehorse with successful fusion. He called his technique distraction-compression stabilization. In the 1980s, Kuslich and others adapted Bagby’s basket for human use. Subsequently, threaded PLIF cages were introduced.27 Threaded PLIF cages were thought to have biomechanical advantages over traditional dorsolateral fusion, including providing anterior column support, placement closer to the vertebral center of rotation, and a reduced bone graft requirement.28 The FDA approved anterior lumbar interbody fusion cages in 1996. Until the end of the 1990s, most cages were made of titanium. It was not until the late 1990s that the first radiolucent polymer implants (PEEK cages) were introduced. Over the last decade, the field of interbody cage technology has exploded, and a variety of implants have been introduced into the market.

A variety of cages for lumbar interbody fusion surgery are currently available from a number of manufacturers. Cages come in various sizes and shapes and include circular, tapered, and rectangular, with and without curvature. Some devices have design features such as radiolucency that allow assessment of fusion; some have end-plate interdigitation with serrations, screw threads, or spikes; and others are modular. Modular cages are designed to customize the fit of the cage to each patient’s intervertebral geometry.

The following features are desirable in the design of an interbody cage:

• A cage should ideally have a hollow region of sufficient size to allow packing of bone graft or bone graft substitute.

• It should be structurally sturdy so that it can withstand the great forces applied to it in the immediate postoperative period.

• It should have a modulus of elasticity that is similar to that of vertebral bone to optimize fusion and avoid subsidence.

• It should have ridges or teeth to resist ventral migration or retropulsion into the canal. Serrations on the top and bottom surfaces of the cage may improve fixation strength.

• It should be radiolucent to allow visualization of fusion on radiographs.

• If inserted from a dorsal approach (TLIF or PLIF) it should be tapered, with a bullet-shaped tip to allow easier initial insertion into the disc space.

The stiffness of a cage has been found to influence fusion rates.29,30 Ideally, a cage would have a modulus of elasticity that is similar to that of vertebral bone, which would optimize the load transfer between the cage and the adjacent vertebral bodies and reduce the effects of stress shielding on the graft material. Carbon fiber cages have a modulus of elasticity closer to that of cortical bone.31 In contrast, metal and titanium cages exceed the stiffness of the vertebral bone. The modulus of elasticity of stainless steel and titanium implants is 200 and 110 GPa, respectively,32 compared with that of vertebral trabecular and cortical bone, which is 2.1 and 2.4 GPa, respectively.33,34

Titanium cages have the disadvantage of incomplete radiographic assessment of the fusion mass. Furthermore, owing to the mismatch of modulus of elasticity of titanium and vertebral bone, the stiffness of titanium cages may cause subsidence into the vertebral end plates. PEEK is a semicrystalline aromatic polymer used as a structural spacer that has gained popularity because of its similar modulus of elasticity to that of bone and its radiolucency. It can be used in conjunction with carbon fiber reinforcement or as pure PEEK. Radiomarker dots are used at the ventral and dorsal aspects of the cage so that the surgeon can see the implant on radiographs. PEEK is also MRI and CT compatible and does not create significant implant artifact on these imaging studies. PEEK cages come in a variety of sizes (Fig. 56-5).