Pain in People with Dementia—Its Relationship to Neuropathology

FIGURE 6-3 Sub/cortical area and pathways belonging to the medial and lateral pain systems in vascular dementia (VD). Note the disconnections between the various brain areas.

The medial pain system is involved in the motivational/affective aspects, cognitive/evaluative aspects, memory for pain, and autonomic aspects of pain [101, 114].

Thalamic nuclei, including medial and intralaminar nuclei, receive nociceptive information either directly through the spinothalamic tract (STT) or indirectly through the spinoreticular and spinomesencephalic tract (SRT and SMT, respectively). Subsequently, the thalamus transmits information to the anterior cingulate cortex (ACC), insula, parietal operculum (PO), and the secondary somatosensory cortex (S2). Areas of the reticular formation such as the locus coeruleus (LC) and parabrachial nucleus (PBN) convey nociceptive information to the amygdala, hippocampus, and the hypothalamic nuclei including the paraventricular nucleus (PVN) [89, 101, 114]. In the PVN, oxytocin and arginine vasopressin are produced; the latter is co-localized with corticotrophin-releasing hormone (CRH) [54, 84, 110]. The tuberomammillary nucleus (TMN) is the only histaminergic nucleus of the brain [54, 84, 110]. Histamine, oxytocin, arginine vasopressin, and CRH are neuroactive compounds with an antinociceptive effect [111].

The STT also conveys information to the lateral thalamus, which projects to the insula, PO, S2, and the primary somatosensory cortex (S1). The lateral pain system is known to play a crucial role in the sensory/discriminative aspects of pain [101, 114]. 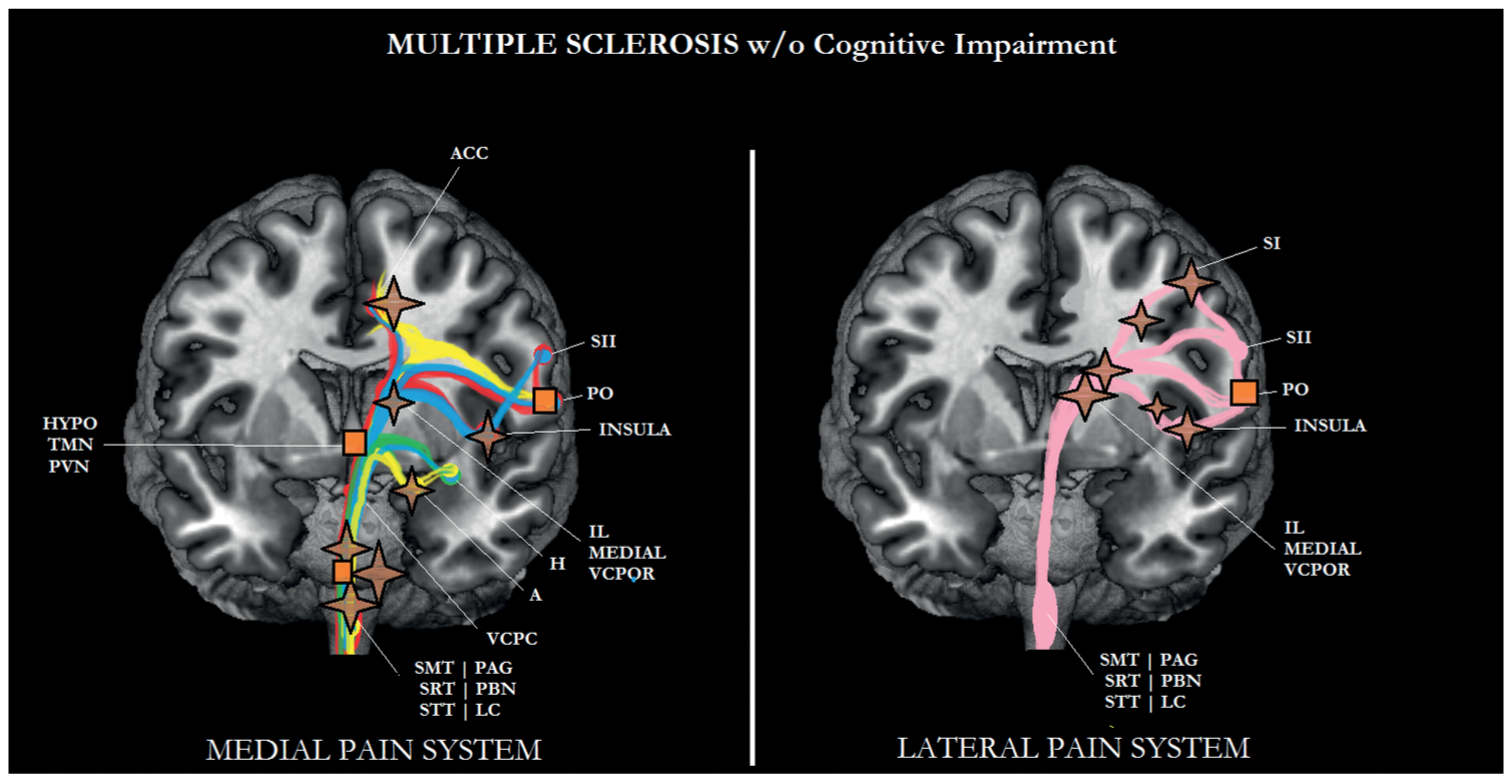 THE MEDIAL AND LATERAL PAIN SYSTEM IN DEMENTIAS

AD is characterized by degeneration in most of the areas of the medial pain system (see Fig. 6-2). More specifically, the degeneration of the amygdala and hippocampus [20, 40] might be responsible for a decline in memory for pain and, together with the TMN [109], for the blunting of the autonomic responses. Furthermore, one could hypothesize that because of atrophy of the amygdala, hippocampus, LC, ACC, and S2, cognitive/evaluative aspects of pain are likely to deteriorate as well, particularly in persistent pain, a type of pain that is most prevalent in elderly persons in a nursing home setting [47]; cognitive processes such as anticipation of the future and behavioral responses to pain are most important [83]. As can be seen in Fig. 6-2, nociceptive information can still be transmitted to S1, which might explain that the pain threshold (lateral pain system; sensory-discriminative aspects of pain) in AD is not different from the pain threshold in elderly persons without dementia (see Defrin et al. 2015 for review and Chapter 4). The lateral pain system does show some functional decline in AD though; compared with elderly persons without dementia, the sensory threshold was elevated in AD [42]. 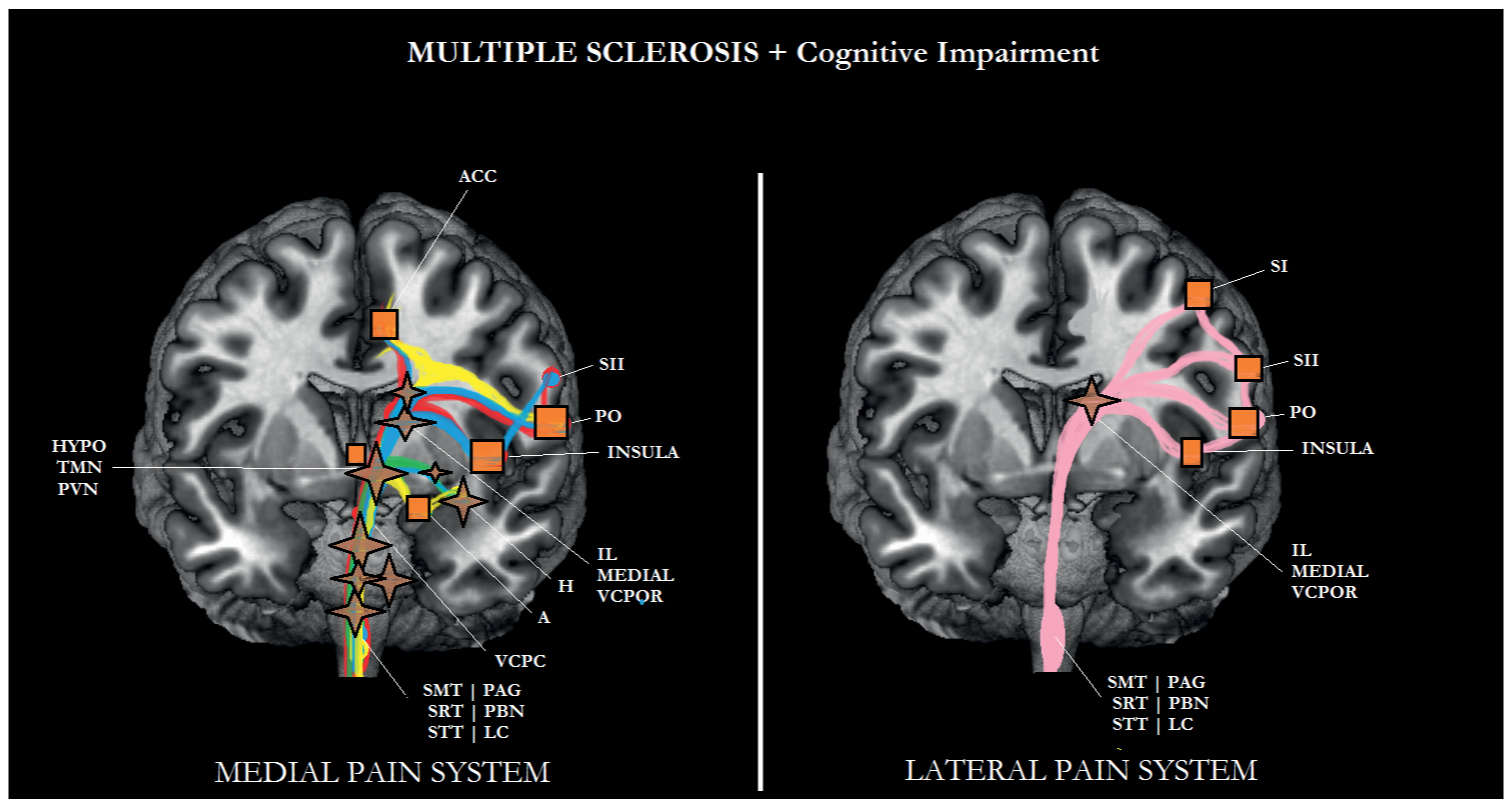 Based on the above-mentioned findings, one might conclude that patients with AD may show a decrease in the motivational/affective aspects of pain, and hence may suffer from less pain than those without AD. Two important issues plead against this suggestion. In the first place, an experimental study applying mechanical stimuli as painful stimuli to patients with AD performed by Cole and coworkers [27] suggested that the activity in the medial and lateral pain systems was unaffected. Patients were in a moderate to mild stage of dementia. In the second place, white matter lesions are characteristic not only for vascular dementia but also for AD [80, Varma et al., 2002b].

In one study, pain was assessed in patients with possible vascular dementia [96]. In that study, the prevalence of osteoporosis was higher in the elderly persons without dementia, whereas diabetes neuropathy occurred more frequently in elderly with vascular dementia. Various pain scales (also used in pain assessment for AD) indicated that elderly persons with vascular dementia communicated to suffer more from pain (motivational/affective aspects) than elderly persons without dementia. In a second recent study, patients with probable vascular dementia participated [92]. This diagnosis was possible because brain imaging data of these patients were available, indicating subcortical white matter lesions. These findings support the results of the first study, that is, more affective pain experience in this group of patients, compared with older persons without dementia. Moreover, we found a significant negative relationship between pain affect and global cognitive functioning, measured by the Mini-Mental State Examination. This latter finding implies that the lower the patient’s global cognitive functioning, the more the patient suffers from pain. Further studies using experimental pain stimuli are required to substantiate this view.

An explanation for this finding is that subcortical white matter lesions, a neuropathological hallmark of vascular dementia [4], cause a disconnection between cortical areas and between cortical and subcortical areas [77], resulting in a so-called deafferentation pain [34]. For instance, white matter lesions may disrupt connections between the intralaminar thalamic nuclei and somatosensory areas (S1, S2), resulting in abnormal sensations (dysesthesia) [98]. A possible decline in the other four dimensions of pain will likely depend on exactly where in the brain that the infarctions have occurred.

In only one clinical study, pain experience was assessed in patients with frontal variant frontotemporal dementia and compared to the pain experience of those with AD and vascular dementia [6]. A remarkable finding was that in comparison with the latter two groups, elderly people with frontal FTD indicated to experience significantly less pain. A more recent experimental pain study [21], applying electrical stimuli as painful stimuli, observed a higher pain threshold and a higher pain tolerance in FTD patients compared with those without FTD. The findings of both studies strengthen each other; that is, patients with FTD may suffer from less pain than older persons without dementia and even less than those suffering from other subtypes of dementia.

One possible explanation for this finding might be the severe metabolic decline seen in frontal FTD, indicated by a marked decrease in cerebral blood flow to the prefrontal cortex and ACC (see Figs. 6-3 and 6-4) [113]. These cortical areas play an important role in the processing of motivational/affective aspects of pain. Although the amygdala and hippocampus are less affected in FTD than in AD (see Fig. 6-4) [12, 65], when assessing pain in patients with FTD, one should take into consideration a decline in the cognitive/evaluative aspects, the autonomic responses evoked by pain, and the memory for pain.

THE MEDIAL AND LATERAL PAIN SYSTEM IN PD AND MS

Pain was one of the dependent variables in several studies that investigated the influence of PD on a patient’s quality of life. In one study, a significant association between the progression of PD and an increase in pain was observed over a period of 4 years [59]. Importantly, the patients were not cognitively impaired (average Mini-Mental State Examination score after 4 years: 26.2). Similar findings were reported in another longitudinal study, in which pain was assessed over a 3-year period [90]. In two reviews, a considerable number of somatic pain syndromes including musculoskeletal disorders such as limb rigidity, radicular-neuropathic disorders such as restless legs syndrome, dystonia, akathisia, neck pain, and headache have been described in relation to PD [39, 116]. One nonsomatically-based pain syndrome with a less clear etiology comprises primary sensory symptoms [24] and is considered a type of central pain [39, 99, 116].

Based on the location of the neuropathology, Lewy bodies and Lewy neurites in areas such as the coeruleus–subcoeruleus region, the nucleus gigantocellularis, and the bulbar nuclei normally inhibit nociceptive transmission at the spinal dorsal horn malfunction in PD [58, 120] and are responsible for the clinically observed increase in motivational-affective aspects of pain (see Figs. 6-5 and 6-6). As can be seen in these figures, the other aspects of pain can still be processed. Although there is ample evidence that inpatients with PD may suffer from more pain than controls, it is also known that levodopa may attenuate the increased pain experience [37]. According to these authors, dopamine may exert its analgesic effect through serotonin.

Evidence of pain experience in MS emerges from various reviews of the most frequently occurring pain syndromes in MS. These pain syndromes include trigeminal neuralgia, somatic pain such as back pain and pain related to spasticity, visceral pain most frequently caused by spasms of the bladder, and a variety of other painful conditions such as optic neuritis and an acute radicular syndrome [60, 78, 106].

In addition, dysesthesia, a type of central pain that consists of unpleasant sensations as a reaction to touch, has been described in patients with MS [3, 60, 106]. Others confirmed the presence of central pain in MS [79], which might also be reflected in the etiology of severe acute headaches [43

Tags: Pain in Dementia
Mar 8, 2017 | Posted by admin in NEUROLOGY | Comments Off on Pain in People with Dementia—Its Relationship to Neuropathology
Premium Wordpress Themes by UFO Themes
WordPress theme by UFO themes