Pain Perception and Report in Persons with Dementia

PSYCHOPHYSICAL STUDIES OF PAIN PERCEPTION IN PERSONS WITH DEMENTIA

The most salient characteristic of dementia, regardless of pathogenic etiology, is an irreversible decline in multiple cognitive abilities, including thinking, memory, language, perceptual skills, judgment, emotional control, and thinking [2]. These types of cognitive impairment will impact on the ability to communicate pain, but it is also worth considering whether such deficits might also affect the fundamental experience of pain itself. For instance, given severe memory loss, can pain ever be persistent or is the current experience the total lived experience? Would a disturbance of multiple higher cortical functions impair an individual’s ability to discriminate potentially damaging from innocuous sensations? How can one make sense and meaning of pain symptoms when lacking cognitive functions? Would deterioration in emotional control preclude the integration of noxious sensations into an appropriate emotional context? Could errors of judgment interfere with the capacity to evaluate the sensory-discriminative aspects of painful symptoms (i.e., location, intensity, quality)? Thus, a disturbance of multiple higher cognitive functions could be sufficient, in itself, to impair the complex, subjective perceptual experience of pain.

Another viable explanation for the apparent undertreatment of pain in persons with dementia is that the neuropathology of disease might directly interfere with the CNS structures underlying the perceptual experience of pain and alter the sensitivity to incoming noxious sensations [17, 52, 53, 56] (see Chapters 5 and 6 for a full description). This might diminish the pain experience and lead to a reduction in the number of pain complaints. Given the widely distributed pain network and the knowledge that the neuropathologic damage of dementia varies between the common subtypes (AD, vascular, mixed, Lewy body dementia, frontotemporal dementia, and others), each specific type of dementia may need to be considered as its own distinct entity. Furthermore, both excitatory and inhibitory acting CNS structures might be affected by the neuropathology of dementia, leading to varying effects on the overall experience of pain.

The vast majority of empirical studies examining the potential interaction between pain processing and dementia have focused on AD. Psychophysical studies using experimental pain stimuli as well as most studies of other behavioral and physiologic indicators of pain (facial expressions, autonomic measures, flexion withdrawal reflexes) and neuroimaging studies have nearly all been undertaken in persons with AD. On the basis of the known specific neuropathology of AD and its interaction with the pain processing network, Scherder and colleagues have proposed a selective impairment in the affective and cognitive dimensions of pain [54]. The lateral pain pathway responsible for sensory discriminative aspects of pain is relatively well preserved from the neurodegenerative changes commonly seen in AD, until very advanced stages [17, 60]. Conversely, intralaminar thalamic nuclei assigned to the medial pain system are subject to neurofibrillary pathology at the earliest preclinical stage of AD [50]. The early loss of limbic structures, hippocampus and prefrontal cortical structures of the medial pain pathway, suggest a potentially selective impairment in the unpleasantness and cognitive dimensions of pain [56].

A summary of studies on pain threshold or the minimum level of noxious stimulation required to elicit a self-report of just noticeable pain in persons with dementia is shown in Fig. 3-2. This work has consistently shown no apparent change in pain threshold in persons with AD when compared with age-matched controls (see recent review by Defrin et al. [16]). The observed lack of change in pain threshold occurs regardless of stimulus type, including electricity [5, 6, 32, 49], heat [20, 31], cold [31], ischemia [6], and, with one exception [12], mechanical pressure [30, 34]. Pain threshold requires ratings of the sensory-discriminative properties of experimental noxious stimuli and so can be seen to support the notion of an unaffected lateral pain pathway in persons with AD. By necessity, all participants in pain threshold studies had only mild levels of cognitive impairment. Nonetheless, the ability to provide self-report ratings has been shown to decline with a greater severity of cognitive impairment in these studies [32], and ratings of pain intensity appear to be negatively correlated with Mini-Mental State Examination (MMSE) score [5, 49]. This might suggest that alterations in pain processing are very much dependent on the stage of AD even in the mild-moderate range.

Pain tolerance or the maximum intensity of noxious stimulation that can be endured before voluntary withdrawal has been examined less often in empirical studies (see Fig. 3-2). Benedetti and colleagues showed a significant increase in pain tolerance to electrical and ischemic stimuli in persons with AD [6, 49], and the magnitude of this increase was associated with the severity of cognitive impairment. Given the lack of change in pain threshold, these findings were taken to suggest a dissociation between the sensory and affective aspects of the pain experience in AD [6]. A more recent study has, however, failed to replicate these findings, with no reported change in pain tolerance to ice water and an even decreased pain tolerance to mechanical pressure [30]. This may indicate a modality-specific change in pain tolerance and does raise some questions about the ubiquity of impaired affective pain processing in persons with AD. Further studies are needed to help resolve this disparity. 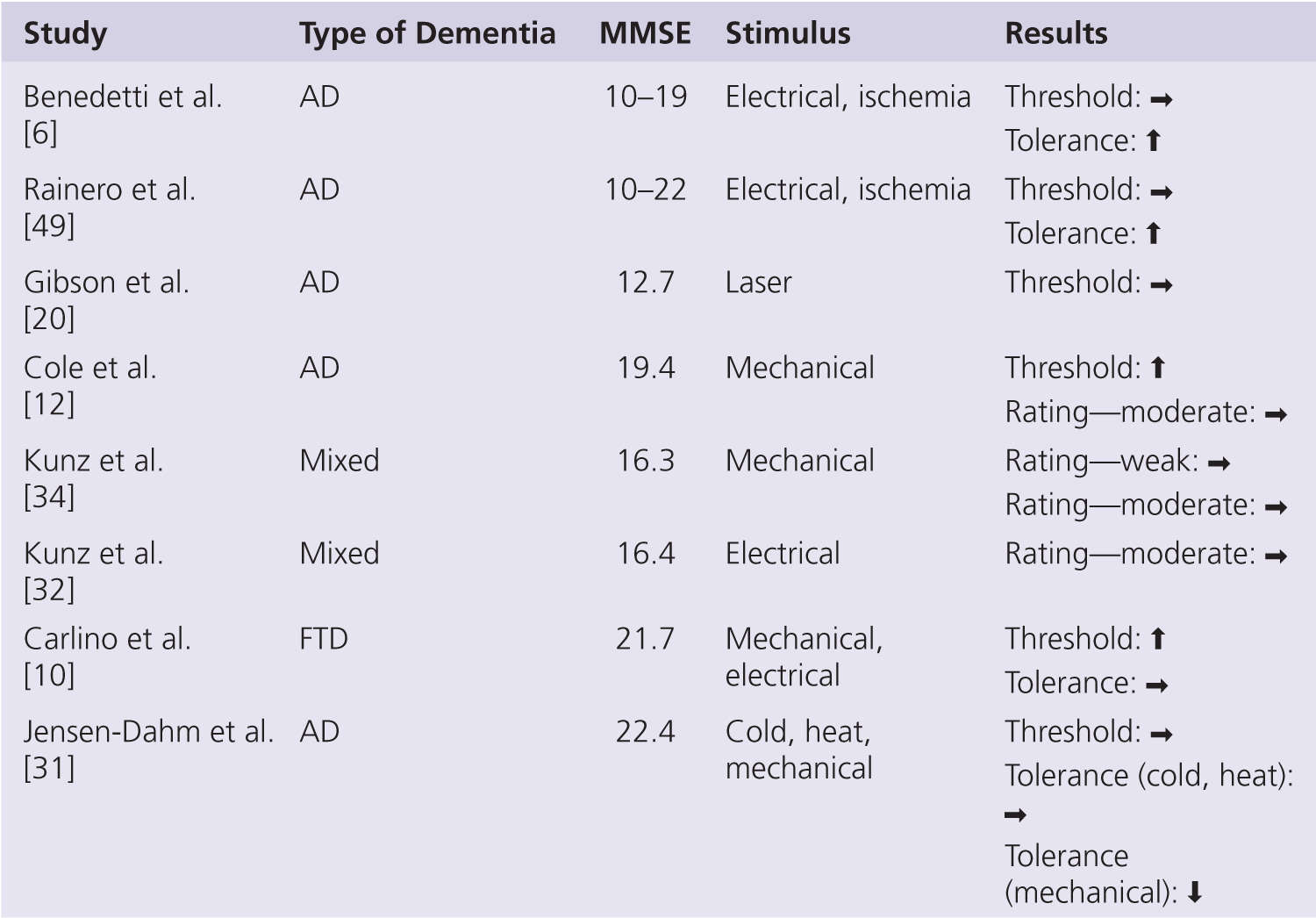 One might expect that the more severe the level of cognitive impairment, the greater the likely change in pain perception. However, the capacity of self-report also declines with increasing severity of dementia, and so other measures of pain are needed to isolate the true effects. A summary of experimental studies using nonverbal psychophysiological measures of pain in persons with dementia is shown in Fig. 3-3. Studies monitoring facial expressions in response to controlled levels of noxious stimulation reveal either a significantly increased response in those with AD in two studies [32, 34] or no change in one study [38]. The facial expressions were able to differentiate non-noxious and noxious stimulus intensities as well as different levels of noxious stimulation in both controls and AD, suggesting specific nonverbal behaviors signaling pain still in early dementia [34, 38]. Facial expressions were shown to be unchanged in AD immediately following a uniform clinical pain stimulus, such as venipuncture or injection in three studies [23, 26, 48]. The tendency toward increased facial expressions in response to pain could suggest an increased sensitivity to pain in persons with AD or that facial actions represent a different aspect of the pain experience—a more reflexive, automatic response that may be disinhibited in persons with cognitive impairment (see recent review about this matter by Lautenbacher and Kunz [35]). In support of this conclusion, persons with AD have also been found to display enhanced nociceptive flexion withdrawal reflexes (RIII) in response to experimental pain [33, 34, 36, 62]. However, autonomic responses typically associated with the onset of acute pain (i.e., increased heart rate, blood pressure, galvanic skin resistance, breathing) appear to be blunted in persons with AD [47]. 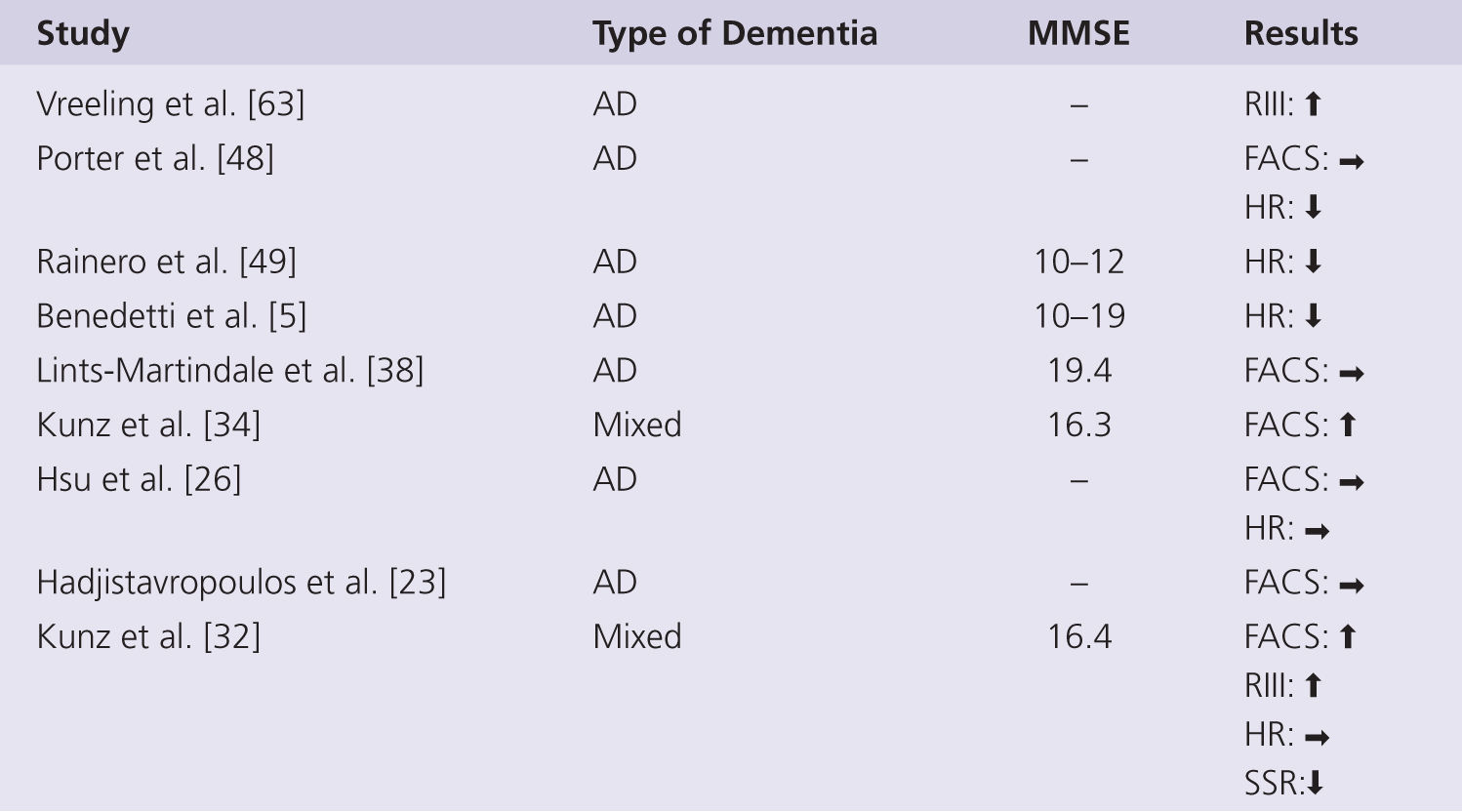 Much of the elevation in autonomic indices typically occurs during anticipation of an impending painful stimulus, yet this anticipatory response is lacking in those with AD [5, 48, 49]. Group differences in the poststimulus autonomic response, particularly in heart rate change, are less obvious [48] or unchanged [26, 32]. The poststimulus autonomic response to stronger intensity pain is also unchanged in those with AD [49], indicating that autonomic responses are still present in older people with AD [47]. The autonomic responses to noxious stimulation have been interpreted as evidence of impaired medial pain pathways processing and as such as indicators of disturbed emotional pain control [5, 49]. However, such measures are very indirect markers of the functional integrity of medial pain pathways, and a known dysfunction in sympathetic and parasympathetic nervous system with AD [21, 28] could also explain the blunted response as a generalized phenomenon, rather than a pain-specific deficit.

Given the CNS neuropathology of AD, the most profound effects on pain would be expected to occur in the CNS processing of noxious information. Neurophysiological and neuroimaging studies have been undertaken using both EEG and fMRI. An early study by Cornu [14

Tags: Pain in Dementia
Mar 8, 2017 | Posted by admin in NEUROLOGY | Comments Off on Pain Perception and Report in Persons with Dementia
Premium Wordpress Themes by UFO Themes
WordPress theme by UFO themes