The three basic functions of the spinal column are to allow movement, transmit loads, and protect the neural elements. The functional spinal unit (FSU) as defined by White and Panjabi1 consists of a three-joint complex including the disc (end plate, anulus fibrosus, and nucleus pulposus) and the dorsal facet joints. More recently, the FSU has been redefined to include the passive and active constraints that are provided by the attached ligaments and muscles. The FSU performs as a continuous, semiconstrained joint, where complex three-dimensional movements occur. These movements, which occur through 6 degrees of freedom, include axial compression and distraction and anterior, posterior, and lateral bending, translation, and rotation. These movements are constrained by the need to protect neurologic elements and yet maintain the head balanced over the pelvis to facilitate interaction with the surrounding environment.

FSUs are typically subject to ongoing degenerative changes. These degenerative changes represent a continuum of mechanical deterioration, secondary to multiple etiologies (e.g., natural history, trauma, metabolic conditions), which may or may not be symptomatic (e.g., mechanical pain, inflammatory pain, radicular pain, stenotic symptoms). As the FSU degenerates, the normal biomechanical parameters are altered, and compensatory mechanisms (e.g., loss of lumbar lordosis, hip and knee flexion posture) are recruited to achieve the goals of spinal balance and motion.

The current surgical “gold standard” strategy for treating symptomatic degeneration of the FSU is to stabilize the degenerated segment by fusing the affected spinal level. The goal of fusion is to restore the native anatomic relationships including disc height, lordosis, and coronal alignment, while relieving the patient’s painful symptoms. Surgical strategies have evolved from dorsal, dorsolateral, ventral, instrumented, and uninstrumented fusions to contemporary techniques involving interbody cages and synthetic and biologic bone substitutes. Despite this evolution, the results of fusion are less than perfect, with fusion rates ranging from 60% to 90% and clinical outcome improvement rates ranging from 60% to 70%.2 Spinal fusion also is associated with the longer-term problem of increasing the strain at the adjacent levels, potentially contributing to premature degenerative changes.3 To date, none of the increasingly complex implants and instruments has resulted in an improvement in the outcomes of fusion; with this in mind, similar to the evolution to arthroplasty from fusion of a peripheral joint, a philosophy of spine arthroplasty instead of spinal fusion is now evolving.

In the development of a spinal arthroplasty system, one must consider the following five principal issues: (1) an understanding of how the spine reacts to loading in the normal and degenerative state; (2) the ability of the device to replicate FSU mechanical properties including motion; (3) the clinical effectiveness of the arthroplasty device; (4) the ability of the device to prevent adjacent-level premature deterioration; and (5) the revisability of the implant in the event of infection, dislodgement, or device failure.

Spinal Biomechanics in the Normal and Degenerated Spine

Disc degeneration is part of the natural aging process, and it does not always result in painful conditions. Lee4 compiled a critical literature review of spinal biomechanics for the lumbar spine, describing the significance of the individual spinal elements and their impact on maintaining a healthy, functioning spine. Analysis of the data Lee compiled shows that providing motion is not the primary function of the native disc, but that passive resistance to the forces during motion is the more important factor to be considered when designing a strategy for long-term restoration of the FSU. Likewise, Ito et al.5 verified the notion of passive resistance by describing the nonlinear relationship between compressive load and disc stiffness. They reported low stiffness at lower loads (800 N/mm at 1000 N) and proportionately higher stiffness at higher loads (2000 N/mm at 4000 N). This differential allows for less resistance to motion at the lower loads of daily activities and more resistance to motion at the higher loads. This phenomenon presumably works to maintain spinal alignment and to protect the neurologic structures throughout the full range of motion.

Kimura et al.6 illustrated and quantified the effect of loading on the lumbar spine in eight volunteers. These investigators described the functional response of the lumbar spine and the ability of the spine to adapt to normal loading. Their key finding was that the spine when loaded first responds by increasing the native lordotic or kyphotic curvature and subsequently responds by altering disc height. These changes in disc height and the differential stiffness described by Ito et al.5 are reflections of the viscoelastic and biomechanical nature of the nucleus, anulus, and end-plate complex.

During development of the “follower load” biomechanical model, Patwardhan et al.7 defined the mechanism by which the spinal system attempts to maintain and reduce the localized shear stress on each intervertebral disc at or near zero during body movements. The shear stress, if left unchecked, presumably can cause intradiscal disruption and injury, possibly contributing to degeneration and mechanical dysfunction. Clinically, any disruption of an index FSU either ventrally or dorsally by injury, aging, or surgery may exaggerate the degeneration observed at the adjacent levels, as a result of the spinal system attempting to compensate for a compromised index FSU.

Kirkaldy-Willis8,9 schematically depicted the pathophysiology of degeneration of the lumbar spine as a degenerative cascade (Fig. 162-1). He described the three phases of degeneration as dysfunction, instability, and ultimately restabilization. Early degenerative events, such as disc herniation, lead to decreased stiffness of the spine. The natural response of the body is to resist abnormal stresses and strains with physiologic responses, such as osteophyte formation. Osteophytes are a manifestation of the body’s attempt to reduce the shear stress toward zero and to restore the load-bearing capacity of the FSU. The fact that the restoration of stability and load bearing may lead to other clinical pathologies (e.g., nerve compression and loss of motion) emphasizes the critical importance of stability and load bearing even at the expense of neurologic compromise and loss of flexibility. 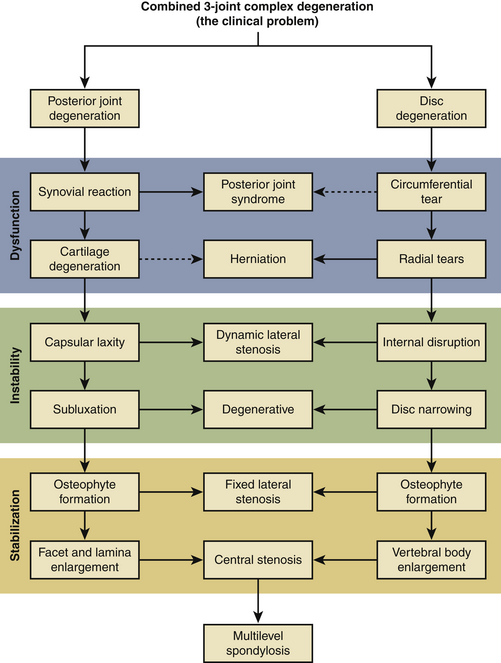 With the aforementioned in mind, any surgical intervention, especially disc arthroplasty, must take the biomechanical responses, the inherent disc function, and the degenerative cascade into account. Following the algorithm created by Kirkaldy-Willis,8,9 the body’s natural response to degenerative changes is to work toward stabilization, reducing motion through increased stiffness and osteophyte formation. It is imperative to match the proposed treatment to the stage of degeneration. If intervention on the degenerated disc uses a replacement prosthesis that introduces unnatural and unconstrained motion, it may reverse the process back toward the abnormally decreased stiffness phase.

Over the last 3 decades, a considerable effort has been undertaken to develop alternatives to fusion. First-generation disc arthroplasty design evolved from experience with hip and knee replacement. These designs mimicked the ball-and-socket design used in artificial hips and knees. Although the first-generation devices may offer some benefit over fusion in that they reportedly preserve motion in the spinal segment, they do not function like the natural disc.10 These devices force a fixed axis of rotation on the spine and do not allow for true coupled motion.11 The natural disc provides for three-dimensional motion: flexion-extension, lateral bending, rotation, and compression. It is also viscoelastic, meaning that the stiffness varies with the loading rate and magnitude.5 The first-generation discs restore only two-dimensional motion, providing no mechanism for axial compression, and they have no viscoelastic properties. Although they may prove successful in replacing a painful, degenerated disc with some motion, they cannot replicate the native function of the natural disc. These shortcomings are more than just theoretical limitations and are likely to lead to problems and disappointing long-term results.

Spinal motion does not rely solely on the intervertebral disc. Any prosthetic replacement should offer more than one dimension of function and should not act in isolation from the native biomechanics of the spine. Lemaire suggested that the ideal substitute for the lumbar disc “… should meet the following criteria: geometry, motion, deformability, inherent stiffness, and acoustics.”11

The hallmark of a next-generation design is that it should replicate native function, embracing the four key biomechanical concepts: complex motion, viscoelasticity, load-bearing capacity, and passive resistance to loads. The load-bearing capability of the spine is also a function of anatomy and alignment. Kimura et al.6 illustrated and quantified the effect of loading on the lumbar spine, describing the functional response of the spine and its ability to adapt to normal loading. The key finding was that the spinal system responds to loading first by increasing the native lordotic or kyphotic curvature and subsequently by altering disc height. This finding highlights the fact that the spinal response to motion is a system-wide response and not just local to the segments.

A prosthetic disc replacement should attempt to restore the natural curvature of the FSU. The ability of the disc to compress axially is fundamental to the load response and load-sharing function, so an artificial disc replacement must move in this dimension to act fully as a shock absorber. The concept of the next-generation design requires full replication of function. A biomechanical basis for an ideal prosthetic disc suggests that it must function in concert with the entire FSU, including the adjacent vertebral bodies, the surrounding ligaments, the facets, and the muscles. Additionally, it should replicate the viscoelasticity of the natural disc, responding with increasing stiffness at higher loads and higher rates of load application. It must compress axially, allowing changes in disc height required to respond to loads appropriately and naturally. It should also restore and maintain the proper angle of the spinal curve. Lastly, it should provide passive resistance to forces during motion.