The Interaction of the Senses

Abstract
The sense of touch is essential for exploring the surrounding world, as the refined sensibility of the hand can identify shapes, forms and structures. However, all of our senses work together to create a full picture of the surrounding environment. The sense of touch works with vision, hearing, smell and taste to generate an inner picture of the outer world. If one sense is impaired or affected by illness, the other senses compensate by refining their capacities. Blind people reading in Braille develop improved sensibility in their fingers, and the vacant cortical visual areas become involved in processing the sensory stimuli from the hand. Deaf people can enjoy music by placing their hands on the speakers; the vibrations induced by the music activate the sensory cortex and cortical areas devoted to hearing. For patients lacking hand sensibility due to nerve injury, a Sensor Glove, equipped with miniature microphones in the fingers, can pick up the friction sounds that are induced when the hand moves across a surface, and the corresponding stimuli that activate auditory cortical areas also activate sensory cortical areas – the patient can listen to what the hand feels. In a clinical experimental setting, sensibility and vision can be co-activated in such a way that a person’s hand sensibility can be transposed into a rubber hand or some other foreign object. Thus, the multisensory and multimodal capacities of the brain are key factors for experiencing and understanding the surrounding world, normally and in specific situations of sensory deprivation.
Our senses interact and work together to generate an inner picture of the outer world. The English physician and mystic Robert Fludd (1574–1637) argued that in man’s mind sensory inputs from the outer world are combined with a divine inspiration to generate an inner picture of the external environment, a concept he illustrated in a clever image where the sensibility of the hand is ranked in the same category as vision and hearing, and where the hand, like the eye and ear, is described as a sense organ (Fig. 10.1). The interaction of our senses becomes especially obvious if one sense is temporarily or permanently defective or absent. For example, groping about to make your way in a dark cellar without using vision leads to the remaining senses being sharpened; the sound of your footsteps and the smell of moisture and mould cooperate with your sensitive hands touching the walls to generate an inner picture of the non-visible cellar space. 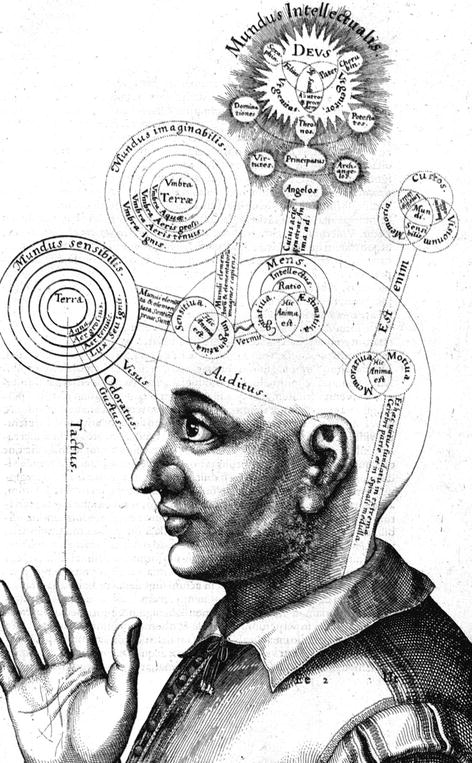 Our senses work together to provide us with a complete picture of the surrounding world. The English physician and mystic Robert Fludd (1574–1637) argued that the sensory perceptions are combined with a divine inspiration to generate an inner picture of the world around us. Copperplate from Robert Fludd’s Tomus secundus de supernaturali, naturali, praeternaturali et contranaturali microcosmi historia (Oppenheim, 1629) (From the exhibition Tankens Bilder (Pictures of the Mind), courtesy of Bildmuseét, Umeå, Sweden)
Our lives become rich and full, thanks to the cooperation and interaction of our senses. Together vision, hearing, tactile sensibility, taste and smell generate a symphony of sensory impressions that enhances and amplifies the total experience of, for instance, a meal. Smells, colours and the appearance of the table setting are all important factors for stimulating the taste buds and the appetite. A fine wine tastes best in a beautifully shaped transparent glass that reveals its liveliness and colour. Who would enjoy champagne in a toothbrush glass or a tin mug? The taste and aroma of an orange are strongest when it is peeled so that the spray from its juice hits the skin and the smells generate an aura around the fruit. Crisps have to be crispy and salty; the hearing input complements the taste impressions. One element of training and re-educating the sensory functions of the hand after a nerve injury can be ‘tactile meals’. In this type of training programme, several senses work together to create an assembled sensory impression and perception of the item that is touched. In such a tactile meal, the sensory input from the hand is combined with vision, hearing, smell and taste. The meal may include soft sugar-coated jelly sweets, rough pieces of liquorice, crisps and jellybeans, or the patient may be peeling oranges, cracking nuts and peeling shrimps.
Certainly our senses interact when we, for instance, walk through the woods on a rainy and stormy day in autumn; the moisture against our skin, the rustling of the leaves, the smells of the soil, the colours. Or, when packing a snowball – the feeling of newly fallen snow, the icy coldness, the packing resistance and the crunching sound of the snow being compressed.

The interaction among our senses is an expression of our brain’s way of working, processing and coordinating sensory impressions from several senses at the same time [1]. According to classic concepts, there are well-defined cortical areas devoted to receiving and processing various types of sensory input: one area in the occipital lobe dedicated to processing visual input, another area in the temporal lobe for processing auditory input and a third area in the parietal lobe for receiving and processing tactile input from various parts of the body – the somatosensory cortex (Fig. 10.2). But this is a simplified description of how the brain receives and processes information from various senses. Our senses interact and cooperate with each other when interpreting sensory impressions via extensive cortical association areas, including earlier experiences. Within these areas, visual, hearing and tactile impressions cooperate to achieve a total experience of the surroundings and to solve specific problems. One example is estimation of distance, something that may require cooperation among vision, hearing and perhaps touch [2, 3].

Schematic drawing illustrating the lobes of the brain. According to classic concepts, various cortical areas are devoted to receiving and processing various types of sensory input: one area in the occipital lobe dedicated to processing visual input, another area in the temporal lobe for processing auditory input and a third area in the parietal lobe for receiving and processing tactile input from various parts of the body – the somatosensory cortex. However, this is a simplified description of how the brain receives and processes information from various senses, since senses interact and cooperate with each other when interpreting sensory impressions via extensive cortical association areas. Broca’s area is important for speech and language ability. The somatosensory and motor cortices are localised behind and anterior to the central sulcus, respectively
Thus, the various sense areas in the brain act together and are closely connected to each other by complex systems of pathways and innumerable synapses. Some areas contain multisensory nerve cells that are activated by input from not only one type of sense, but they can be activated by two or more types of sensory input. Some of those nerve cells are activated by visual as well as tactile sensory input in a visuo-tactile interaction; others are activated by auditory as well as tactile sensory input in an audio-tactile interaction.

The senses of touch and vision are normally closely connected. If you are going to move an apple from one plate to another, you first fix your eyes on the apple until your hand grasps it. Then you shift your eyes to the next plate and keep them there until your hand has put the apple in this new location. During these movements, the eyes are never shifted to the hand or the apple; you intuitively shift your vision to search for landmarks and then keep your eyes there [4]. With each movement the hand adapts the gripping force around the apple to avoid dropping it, while the arm’s lifting power is automatically adjusted to move the apple from one plate to another.
The cooperation between vision and the sense of touch becomes even more evident when one of the senses is absent or does not function appropriately. A person wearing thick gloves loses much of the sensibility of the hand: it then becomes natural to rely on vision for a more effective sensory feedback from the hand. The same is true for hand amputees who use a hand prosthesis. The hand prostheses available today have no conscious sensibility, a fact that makes it important for the amputee to use vision instead to control and regulate the grip and movements of the prosthetic hand.
When one sense is absent, the brain adapts to the situation so that the corresponding ‘vacant’ projectional area takes on new functions and can thus provide more brain power to the remaining senses. This is true for humans as well as animals: in mice that are born blind, the sensibility of the whiskers increases. The whiskers’ projectional area in the brain expands and will include the ‘vacant’ sensory cortical areas. Such a cortical reorganisation even occurs in healthy mice that live for a long time in total darkness [1].
In humans, loss of vision can lead to improved hand sensibility. The refined hand sensibility in blind people has been put to special use in health care in Germany. The gynaecologist Frank Hoffmann from Duisburg got the idea to train visually impaired women to palpate the breasts of women at risk of cancer. He started the project ‘discovering hands’ in 2006. The goal was to develop a cost-effective examination method while simultaneously creating a new work field for blind women. According to the innovators of the project, the extremely well-developed tactile sensibility in the blind women’s hands allowed them to identify significantly smaller tumours in the breast tissues as compared to physicians with intact vision. The ‘discovering hands’ project was concluded at the end of 2008 when the Medical Society in Nordrhein examined the course participants and licensed them as the first practitioners of ‘medical palpation’ in Germany.
In the performing arts, the improved hand sensibility in blind people has been utilised in some theatres to enhance their experience of the theatre’s play. Blind theatregoers were given the opportunity to meet and talk to the actors, to feel the contours of their faces and the character of their clothes. In this way they got to know the actors and develop close relationships with them, which enhanced the theatregoers’ experience of the performance.

I am blind…. What would I do to be able to see?
How can it be possible for me to read what has been written by a person with intact vision?
About history? About art? About medicine? About politics?
About women and men? About myself? About the mysteries of birth
and love? In short, how will it be possible for me, a
blind man, to find my place in the world as a part of the world?

The words are from a diary note of the French teacher Louis Braille, the inventor of the modern Braille alphabet. Louis Braille, born in 1809, was blinded as a result of an infected eye injury in childhood. Braille developed military systems for reading in darkness that became the first useful Braille alphabet, published in 1829. The concept was to utilise the delicate tactile sensibility of the finger pulps to compensate for missing vision. Braille was influenced by an earlier system created for blind people, developed by the French artillery captain Charles Barbier (1767–1841), which was based on 12 raised dots in each sign. The Barbier system was of phonetic nature based on phonetic sounds in the French language.
Only gold members can continue reading. Log In or Register to continue

Tags: The Hand and the Brain
Oct 29, 2016 | Posted by admin in NEUROSURGERY | Comments Off on The Interaction of the Senses
Premium Wordpress Themes by UFO Themes
WordPress theme by UFO themes