How the Hand Shapes the Brain

Abstract
The brain cortex contains more than 100 billion nerve cells and innumerable synaptic connections. The cortical body map is not fixed and hardwired, but can rapidly become reorganised as a result of a strengthening or weakening of the synaptic connections. The hand’s representational area is experience dependent and can easily expand as a result of increased hand activity and increased sensory inflow. By contrast, decreased hand activity may result in a reduced hand representation. Anaesthetising the forearm skin enlarges the hand representational area, located immediately near the forearm representational area, and the result is rapid improvement of hand sensibility.
Nerve injuries may result in the misdirection of regenerating nerve fibres so that they reinnervate incorrect peripheral targets. As a result, the original hand representational area becomes completely reorganised into a mosaiclike pattern, a phenomenon that is associated with poor recovery of hand sensibility and severe persistent impairment of discriminative sensory capacity.
It was long believed that the cortical body map was fixed and hardwired from birth and could not be changed. But today another concept has evolved. We now know that the hand representation in the brain can rapidly change depending on how much, or how little, the hand is used and how much sensory input the brain receives from the hand. The same is true for all body parts; the brain is plastic and rapidly adaptable to change. Brain plasticity is a current key term when referring to learning, training and rehabilitation.
The brain cortex has more than 100 billion nerve cells and innumerable synaptic connections between nerve cells – neurons – forming networks of enormous dimensions. The functional plasticity of the brain is based on the fact that the function in such synaptic connections can be rapidly reinforced, weakened or inhibited. Existing but normally inhibited synapses may be rapidly awakened if the inhibition is withdrawn, resulting in very rapid alterations in synaptic function. The functions in the synaptic connections are constantly undergoing changes depending on changes in the activity of body parts, which was clearly demonstrated more than 50 years ago by Canadian neurophysiologist Donald Hebb [1–5]. Thus, the cortical representation of body parts is continuously modulated in response to activity, behaviour and skill acquisition. Much emphasis has been put on the neuronal dendritic spines, tiny protrusions from the long, slender dendritic extensions of the nerve cells, constituting the synaptic receptors. The appearance of such ‘spines’ constantly changes with activity and learning [6–8]. It is known from animal experiments that adult rats living in an enriched environment with other rats, and with access to various toys and activities, develop a more extensive network of synapses than those who live in solitude in a poor, activity-deprived environment [7, 8] (Fig. 9.1). 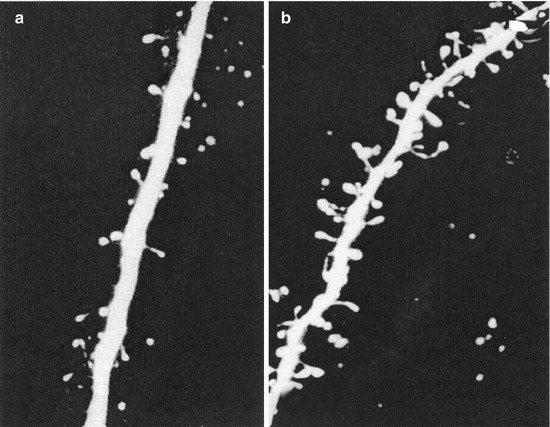 Confusion in the Cortical Hand Representation

The cortical hand map is maintained by normal use of the hands and the associated sensory input. This maintains the borders between the representational areas of separate fingers – a prerequisite for delicate, refined hand sensibility.
But if the sensory input from the hand differs from normal, it may affect the cortical hand representation. In people who work for long periods of time with hand-held vibrating tools, all parts of the hand are simultaneously exposed to vibrations – a type of long-term unphysiological repetitive sensory stimulation the brain does not recognise and that is difficult for the sensory cortex to process. The long-term consequence may be that the cortical hand map is reorganised towards a more irregular pattern where separate finger representational areas are enlarged and somewhat overlap [20–22]. Such changes can contribute to impaired sensibility and coordination of the hand.
Another analogous problem is writer’s cramp, which is usually based on long periods of monotonous repetitive unphysiological hand movements. In such cases, the cortical hand map is reorganised and fine motor coordination is impaired. Another example along the same lines is focal dystonia – a condition that can be seen in musicians who practise extensively – and can result in difficulty controlling the movements in separate fingers (Fig. 9.2) [23–25].

Normally the hand representation in the sensory cortex is well organised with obvious borders between individual finger representational areas (A). In this schematic drawing, a magnifying glass has been placed over the hand representation: 1 thumb, 2 index finger and so on. If the hand is subjected to too much sensory stimuli, the representation of the hand in the sensory brain cortex expands – ‘the hand becomes larger in the brain’. If specific fingers are stimulated to a large extent, for instance the index and middle fingers, their representational areas increase (B). If the hand performs monotonous movements for a long time or is subjected to excessive sensory stimuli, its cortical representation changes and splits in a mosaiclike pattern (C), such as in focal dystonia, writer’s cramp or vibration injury (Adapted from Lundborg [35])
Writer’s cramp and focal dystonia are very difficult to treat; the problem is not primarily localised in the hand but rather in the brain. Specially designed training programmes are required to normalise the balance between hand and brain and to re-establish a normal cortical hand representation in the somatosensory cortex [26, 27].

Most surgical procedures on the hand are performed under local anaesthesia of individual fingers or of the whole arm. Anaesthesia of individual fingers has a rapid and dramatic effect on their cortical hand representations: when the cortical representation of the anaesthetised finger suddenly becomes still due to lack of sensory input, the nearby representational areas of adjacent fingers expand so that they ‘take over’ the still area.
When the whole arm is anaesthetised by a so-called axillary nerve block, the corresponding cortical representational area is put into a state of vacancy due to loss of sensory input. This phenomenon has obvious effects on the sensibility of the contralateral non-anaesthetised arm. The gap between the two brain hemispheres is bridged by corpus callosum, which consists of nerve fibres connecting the left and right parts of the brain, allowing for a constant ongoing interaction between both hemispheres. If, let us say, the representational area of the right arm in the left hemisphere is put into a state of vacancy due to anaesthesia of the right arm, the non-anaesthetised left arm can benefit from this vacant area, gaining access to more brain space. The result is improved sensory function and a slightly increased grip force in the contralateral non-anaesthetised left hand [28–30].

How a Local Anaesthetic Cream, Applied to the Forearm, Can Improve Hand Sensibility

Knowledge about the cortical hand map and its capacity for rapid reorganisation has created exciting new possibilities for improving hand sensibility. If the skin of the forearm is anaesthetised with an anaesthetic cream, the corresponding representational area in the sensory cortex is put into a state of idleness due to a lack of sensory impulses. But there is a constant ongoing cortical competition for space in the brain among the various body parts, resulting in an interesting phenomenon when the forearm skin is anaesthetised. Following cutaneous anaesthesia of the forearm, the hand representational area, which is close to the inactive forearm representational area, gets a chance to expand through the activation of synaptic connections and will rapidly also incorporate the area that earlier represented the forearm, thus giving the hand access to more ‘brain space’ [31] (Fig. 9.3). A larger number of nerve cells than before are now involved in processing the sensory input from the hand. The result is that hand sensibility suddenly improves [32]. The effect can be maintained if the cutaneous anaesthetic procedure is repeated at a few days’ interval and if it is repeated over a more extended time period at successively greater intervals, the effect may be long-lasting. This is a good illustration of the brain’s capacity for adaptation to changes in its functional organisation and how we can utilise this capacity therapeutically in various types of sensory impairment in the hand [21, 29, 32–34].

Tags: The Hand and the Brain
Oct 29, 2016 | Posted by admin in NEUROSURGERY | Comments Off on How the Hand Shapes the Brain
Premium Wordpress Themes by UFO Themes
WordPress theme by UFO themes