Mirrors in the Brain

Abstract
Mirror neurons are motor neurons that are activated when we perform a motor action and when we observe a motor action performed by someone else. The first article on mirror neurons, published by Rizzolatti in 1996, inspired new theories about mechanisms for learning by imitation, action understanding and the ability to feel empathy. Mirror neurons are mainly found in the premotor cortex in the frontal and parietal lobes and have strong connections to the cortical visual and emotional areas in the limbic system. Additionally, observation of sensory events can be reflected in our own sensory cortex; observing the touch of a hand activates the hand’s representational area in the sensory cortex. These areas can also be activated by listening to ‘action words’ associated with hand activities and by just imaging a hand activity – so-called motor imagery.
The term ‘mirror neurons’ refers to types of nerve cells in the brain that are activated when we perform a motor activity or when we observe motor actions performed by others. The discovery of mirror neurons has greatly influenced our view on how the brain functions. About 20 years ago, Giacomo Rizzolatti, professor of physiology at Parma University, accidently discovered the existence of mirror neurons – nerve cells in our brains that can be said to mirror external actions [1]. In laboratory experiments on macaque monkeys, the electrical activity was recorded in the part of brain cortex involved in planning motor actions, the so-called premotor cortex, located in the frontal lobe. The electrical activity in nerve cells in this area could be registered and listened to as crackling sounds in a loudspeaker via electrodes inserted in a specific area called F5. When the monkey stretched out an arm to grasp a peanut, there was a sudden powerful crackling sound from the loudspeaker. When the monkey rested the arm, the sound ceased, but when the monkey again reached for a peanut, the sound reappeared.
Something completely unexpected happened when the experiment was finished and one of the scientists was cleaning up the table. The monkey did not move at all but intensely observed what was happening. When the scientist picked up a peanut, to everyone’s surprise, there was a sharp crackling sound from the loudspeaker; nerve cells in the monkey’s brain were responding to the scientist’s hand movement (Fig. 11.1). Thus, the effect was the same whether the monkey performed the action or observed someone else doing it. The conclusion was that the brain contained nerve cells that were activated when the monkey performed an active hand movement as well as when it observed a hand movement performed by someone else. These cells were named ‘mirror neurons’ since they mirrored – in the monkey’s brain – motor actions in its surroundings. 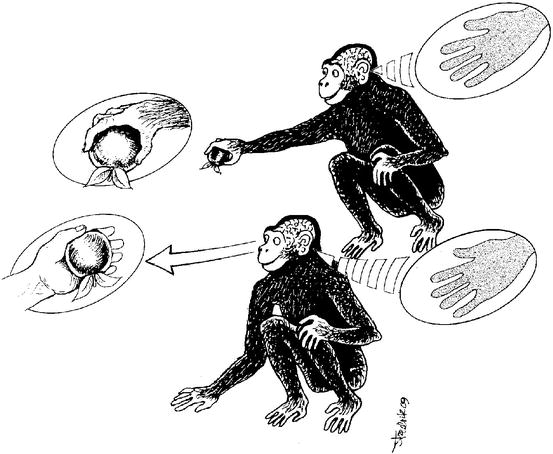 In Rizzolatti’s laboratory experiment, it was obvious that cortical hand representational areas are activated by the mere observation of others’ hands in action. But the occurrences of mirror neurons in the brain are of much greater and more general importance. After the first article was published 1996, the mirror phenomenon in the brain inspired new theories about mechanisms for imitation, learning, action understanding and even sympathy and the ability to feel empathy [1–4]. The monkey experiment showed that just by observing someone picking up a peanut, the monkey automatically generated a copy of the movement in its own head. Today, we know that humans have an even more advanced system of mirror neurons that are distributed within areas of the brain cortex that handle movements, language and feelings. They are nerve cell populations in the brain mainly localised in the premotor cortex in the inferior parts of the frontal and parietal lobes, with strong connections to the visual area in the occipital lobe and emotional areas in the limbic system [5].
Man’s mirror neurons are important for learning by imitation; they are of central importance in learning complex motor tasks like tying shoelaces or a tie or learning the chord grips on a guitar by observing the teacher [6]. Basically, the mirror neurons create a representation of other individuals’ actions in the observer’s own motor system, just as if the observer were performing an identical action himself [7, 8].
Thus, mirror neuron incidents occurring in our surroundings are mirrored and ‘imitated’ in our minds. When we watch a high-jump competition, enjoying the Olympics on TV, most of us feel obvious muscle contractions in our right leg when the high jumper takes off towards the bar. Several experiments have also demonstrated that our mirror neurons help us to share other individuals’ experiences and feelings as a result of watching their facial expressions. Consequently, a biological base for empathy is generated, and thus one may explain the infectiousness of yawning, laughter and also many types of positive or negative moods. Few of us can resist yawning when we observe another person yawning.
Mirror neurons can explain much about how we learn to walk, act, dance or play tennis. But on a deeper level, they also play a role in our understanding of other people’s feelings and problems. When we observe people in our vicinity or even on TV, in movies or the theatre experiencing pain, it activates our own pain centre: observing other people’s reactions like discomfort or disgust can activate corresponding centres in our own brains [9–12]. Perhaps this explains why some people more easily feel empathy than others do. Autistic children have an impaired capacity for activating their mirror neurons, and it has been proposed that they therefore have difficulties in communicating with others and difficulties in understanding others’ intentions and the meaning of their motor activities and facial expressions – ‘broken mirror syndrome’. Psychopaths, too, seem to be dysfunctional in this context, with a weakened activity pattern among the mirror neurons.

Understanding the Intentions of Others

The mirror neurons also make it possible to understand the intentions behind other people’s body language and movements: the mirror function and the activation of familiar, well-established motor patterns in the observer’s brain automatically generate an understanding of the meaning and intentions of movements performed by others – action understanding [7, 8]. Some groups of mirror neurons are activated by observing simple movements in the hand – stretching out the arm, grasping an apple or picking up a peanut – while other groups of mirror neurons are more selective in their reaction pattern and become activated in response to the presumed meaning [13, 14]. In an experiment by Iacoboni, test subjects were asked to observe pictures of people reaching for various items on a tea tray – a teapot, a mug, a cream pitcher, a basket of biscuits and some napkins. Various groups of mirror neurons were activated depending on the intention of the movement; if the hand was presumed to lift a cup of hot tea for drinking purposes, it triggered one group of mirror neurons, but quite another population was activated if the observed hand was supposed to lift the cup in order to clean up and wipe the table [13]. Thus, the activation of mirror neurons requires an understanding of the meaning and intention of the observed movement. When a monkey clearly understands the meaning of an observed hand function, the mirror neurons are activated even if the movement is not completed, for instance, if the last part of the activity is hidden behind a screen [14, 15].
Thus, we can intuitively understand other people’s feelings, actions and intentions, thanks to mirror neurons [16]. In team sports, the group synergy and intuitive understanding of one another’s movements on the field are important to the success of the team. Here we can see much of the value in active tutoring and practising in groups. In rehabilitation programmes, especially after hand injuries, it is an advantage to plan the training on a group basis, making it possible to activate the motor system through the patient’s own activities and also by observing other members’ motor actions.
Mirror neurons are active early in a child’s development: if a mother shows the tip of her tongue to her newborn baby, she immediately gets a mirror response. They are also at work in communication between humans and animals. In Rizzolatti’s original experiments, a monkey’s mirror neurons were activated by the human’s hand movements. It does not matter if the hand is close to or at some distance from the monkey – apparently the hand’s size is not important.
Only gold members can continue reading. Log In or Register to continue

Tags: The Hand and the Brain
Oct 29, 2016 | Posted by admin in NEUROSURGERY | Comments Off on Mirrors in the Brain
Premium Wordpress Themes by UFO Themes
WordPress theme by UFO themes