Cognition and Performance in Patients with Obstructive Sleep Apnea

Chapter 104 Cognition and Performance in Patients with Obstructive Sleep Apnea

Patients with obstructive sleep apnea (OSA) demonstrate variable degrees of cognitive and performance deficits such as difficulties with cognitive processing, sustaining attention, memory, executive functioning, and quality of life, with the deficits in these areas more apparent in those with more-severe disease (higher incidence of abnormal breathing events, greater hypoxemia). The mechanisms leading to such deficits and the relative contribution of sleep disruption, hypoxemia, reduced vigilance, and daytime sleepiness remain unclear. Treatment of OSA with continuous positive airway pressure (CPAP) results in consistent improvement in cognition and performance, although the magnitude of improvement is variable. The role of CPAP as first-line therapy in mild OSA is currently unknown, and its long-term effectiveness with regard to cognitive and performance deficits needs further study. Practically speaking, health care providers must be aware of the potential for cognitive and performance deficits in OSA patients and routinely ask about performance at work, ability to concentrate and maintain attention, irritability, and difficulties performing everyday tasks. It is the practitioner’s obligation to inform the patient of the risks associated with such deficits and protect the public through appropriate action until the patient is successfully treated.

The threat of impaired performance to the patient as well as the well-being of others presents legal and moral challenges to practitioners. Whether a person should be denied the privilege to operate a motor vehicle or work because of this risk is a matter of professional debate and legislative consideration.

This chapter describes the cognitive and performance deficits in patients with OSA, considers the scope of this problem, proposes etiologic mechanisms, presents current methods of assessment, and describes the response to treatment. The legal ramifications of impaired functioning and practitioner liability are also addressed. Because respiratory disturbance index (RDI) and apnea–hypopnea index (AHI) are often used interchangeably in the literature, the term used in the cited literature will be the term applied in the chapter.

Cognitive and performance deficits (defined later) are clearly present in some patients with OSA, but the exact prevalence remains unknown. It has been estimated that approximately 80% of OSA patients complain of both excessive daytime sleepiness and cognitive impairments, and half also report personality changes.5 One in four patients with newly diagnosed OSA have appreciable neuropsychological impairments.6 In research studies examining memory, sustained attention, or executive function, memory impairments can be found in up to 9% of OSA subjects, 2% to 25% have problems with sustained attention, and 15% to 42% demonstrate difficulties with executive functioning.7 Traffic accidents and work-related accidents represent surrogate indicators of neurobehavioral performance deficits.8 Compared to nonsnoring normal controls, those with OSA are 37 times more likely to complain of sleepiness, 7.5 times more likely to have difficulties with concentration at work, have a ninefold increase in difficulty learning new tasks, and are 20 times more likely to have problems performing monotonous tasks.1 Excessive daytime sleepiness is associated with greater work limitation in terms of difficulties with time management, mental tasks, interpersonal relationships, and work output.8,9 Beyond difficulties with performance, occupational accidents occur in 50% of male OSA patients; the risk of occupational accidents in women with OSA is six times greater than in controls.8,10

Motor vehicle drivers do not always perceive their impairment and continue to drive while sleepy.11 Overall, compared to normal controls, OSA patients are 2 to 13 times more likely to experience an accident.2 Such accidents are more likely to occur in those who manifest greater daytime sleepiness.2,4 However in some studies, OSA has been associated with motor vehicle crashes independent of daytime sleepiness.4 Sleepiness due to work schedules and sleepiness due to OSA are independent risk factors for accidents. For example, in commercial vehicle drivers, where both sleepiness-promoting conditions coexist, those with the highest level of sleepiness have a twofold increase in multiple accidents.12

To understand the cognitive and neurobehavioral performance deficits that affect patients with OSA, it is helpful to consider them from a categorical perspective. The effects of sleep loss on performance include changes in cognitive performance, difficulty with working memory, slowing of response or inability to sustain attention across the duration of the task, declines in the best effort or fastest response, lapses (acts of omission), and false responses (acts of commission).13 In OSA, hypoxemia–reoxygenation cycles with attendant biochemical and cellular alterations cause dysfunction of the prefrontal cortex. This results in impaired executive function manifesting as false responses (e.g., responding when no stimulus is presented—an example of loss of behavioral inhibition), problems with working memory and contextual memory, problems with cognitive processing (analysis and synthesis) in addition to deficits in the pattern of responses (set shifting), and self-regulation of affect and arousal.14 Box 104-1 presents a description of the performance deficits and commonly used assessment techniques in OSA patients. Tests that can easily be performed in the clinical setting include the Digit Symbol Substitution Task (90-second test) to assess cognitive processing and the Psychomotor Vigilance Task (10-minute task) to evaluate the ability to sustain attention. Summary information regarding the neurobehavioral tests may be found elsewhere.15

Trailmaking A and B: sequencing numbers (A) or letters and numbers (B)

Short-term memory: timed tasks of up to 10 min that require free recall of words, numbers, paragraphs, or figures

Rey Auditory-Verbal Learning Test (figure)
Long-term memory: presenting the subject with lists of items that are longer than the 7-item memory capacity

Inability to maintain attention over time.

Periods of delayed or no response (lapses)

Response to stimuli when none presented (false responses)

Inability to respond to more than one task or stimuli, such as with driving

Tracking (the ability to stay within the driving lane)

Assessed by asking the patients’ preferences, what they like to do, or what makes them angry
Planning component

The impact of OSA on cognitive processing, memory, sustained attention, executive and motor functioning is summarized in Figure 104-1, which portrays the impact or effect of OSA compared to healthy adults. This difference can be quantified in terms of an effect size: the difference in means between clinical and control group means, divided by the standard deviation. An effect size of 0.2 is considered to be small and clinically nonsignificant, 0.5 is moderate and clinically meaningful, and 0.8 is large.16 Across studies (average AHI = 30 events per hour), the effect size or impact of OSA on memory, executive performance, and attention, weighted for sample size, is 0.5, 0.9 and 1, respectively, indicating that moderate OSA may be associated with moderate to large impairments in neurobehavior.17 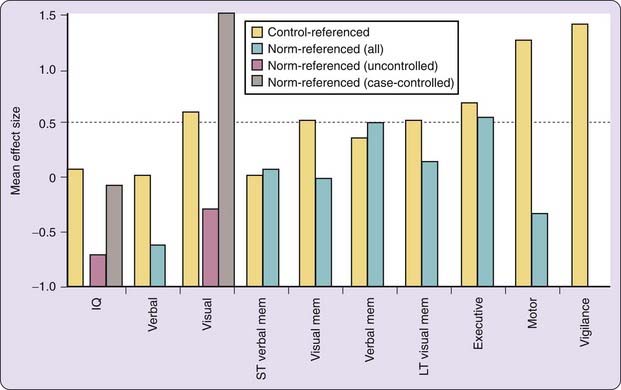 Studies of OSA patients derived from sleep clinic populations show considerable evidence of impaired cognitive processing,4,6,18–20 although the evidence provided by larger population-based studies is less compelling.4 Differences may be due to selection bias of more impaired patients having been referred for clinic evaluation, the tests employed, or the frequent use of snorers as a proxy for polysomnography-documented OSA.4,21

Compared with normal controls (AHI < 5), nonsleepy subjects with milder OSA (AHI 10 to 30) do not have deficits in cognitive processing, suggesting either no deficits or the ability to compensate in less-severe disease.22 On the other hand, there appear to be robust differences in cognitive processing in sleepy patients with moderate to severe OSA (AHI > 15) compared to normal controls.21 These deficits are likely due to sleepiness, OSA or both.

Memory is defined as the ability to register, store, retain, and retrieve information.23 The psychological processes involved in memory include registration, short-term memory, rehearsal, long-term memory, and retrieval.15 Registration, or sensory memory, is the first recognition of a stimulus and serves as evidence of consciousness. Registered information is either processed as short-term memory or quickly decays.15 Short-term, or working, memory involves a limited capacity holding unit for storage of information and operates in conjunction with an executive system to hold and internalize information to direct behavior.15 When these components of memory malfunction, new information is immediately lost and there is a reduction in memory span.15 Repetitive mental processes, or rehearsal, increase the likelihood that the memory trace will endure or be maintained.15 Reduced learning efficiency and loss of new information occurs when there are deficits in rehearsal.

Long-term information storage involves the process of consolidation, or the organization of information based on meaning. Neuropsychological deficits resulting from the inability to store information for the long-term result in the inability to learn, retain, or execute skills or functions.15 Retrieval involves recall of information; a deficit in retrieval produces difficulty with spontaneous recall.15 Procedural memory is the gradual acquisition and the maintenance of motor skills and procedures.23

Decreased alertness experienced by OSA patients potentially impairs registration and other aspects of memory, but the data remain unclear whether these patients have more difficulty with memory function than normal controls.21,24–26 Differences in study populations such as clinic versus broad population-based samples, level of disease severity, and the use of normal controls versus norm-referenced comparisons, might account for the lack of clarity in the literature regarding this issue. The type of memory assessed (episodic, procedural, short-term, working) might also account for differences among studies.25

Attention is the composite of different capacities or processes that reflect how stimuli are received and processed.15 It can be sustained (or tonic), as in the case of vigilance, or it can be phasic, in which attention shifts in response to changing stimuli.15 Concentration refers to focused or selective attention to important stimuli while suppressing others.15 Sometimes used interchangeably with concentration, sustained attention is most affected by daytime sleepiness and probably the root cause of a significant source of OSA morbidity and mortality: motor vehicle crashes. With increased time on task, the ability to maintain attention becomes more taxed, producing uneven performance.27 There is a limit to attentional capacity such that engaging in one task requiring controlled attention can interfere with another task requiring the same processing requirements.15 Divided attention is the ability to respond to more than one task or stimulus and is sensitive to situations where there is reduced attentional capacity.15

OSA patients initially perform as well as normal controls during tasks of short duration (e.g., 10 minutes), but performance instability—uneven performance—occurs over the duration of the task with increasing response time, lapses or failure to respond, and responses without prior stimuli (acts of commission) (Fig. 104-2).27 Deficits in sustained attention are greater in older OSA patients (older than 50 years) compared to younger patients with comparable OSA severity, showing longer reaction time and more lapses in attention in addition to differences compared to the performance of normal controls.28 The magnitude of the impact of OSA on sustained attention tasks ranges from small (effect sizes of 0.2) to very large (effect size of 3.0).3 As with other measures, the magnitude of results in clinic-based (smaller sample size) studies is less but still present when looking at larger community-based samples with lower levels of disease severity.4

Tags: Principles and Practice of Sleep Medicine
Mar 13, 2017 | Posted by admin in NEUROLOGY | Comments Off on Cognition and Performance in Patients with Obstructive Sleep Apnea
Premium Wordpress Themes by UFO Themes
WordPress theme by UFO themes