This purely motor nerve (Fig. 13.1) [8,51] originates partly from the medulla (cranial part or internal ramus) and partly from the spinal cord (spinal root or external ramus). The cranial root arises from cells situated in the caudal part of the nucleus ambiguus of the medulla. Its fibers emerge from the lateral medulla below the roots of the vagus. The spinal part arises from a column of cells (the accessory nucleus) that extends from the first to the sixth cervical cord segments in the dorsolateral part of the ventral horn of the spinal cord. The column of cells and lower motor neuron roots of the spinal accessory nerve are somatotopically arranged: cord levels C1 and C2 innervate predominantly the ipsilateral sternocleidomastoid muscle, and levels C3 and C4 innervate primarily the ipsilateral trapezius [42]. These spinal fibers pass through the lateral funiculus, leaving the cord between the dentate ligament and the dorsal spinal roots. They then unite to form the spinal part and ascend in the subarachnoid space entering the skull through the foramen magnum.

The cranial and spinal roots unite and exit from the skull through the jugular foramen. The cranial portion then branches off as the internal ramus and joins the vagus nerve to supply the pharynx and larynx. The external ramus enters the neck between the internal carotid artery and the internal jugular vein. It then penetrates and supplies the sternocleidomastoid muscle and emerges near the middle of the posterior border of the muscle. The ramus then crosses the posterior cervical triangle to supply the trapezius muscle. In its course the nerve receives branches from the second, third, and fourth cervical nerves. The innervation of the sternocleidomastoid muscle may be more complex than is usually quoted. For example, there was residual sternocleidomastoid movement in 9 out of 15 cases where a division of the spinal components of the accessory nerve and the upper cervical motor roots was made as treatment for spasmodic torticollis [23]. It is postulated that this residual innervation was likely of vagal origin.

The supranuclear innervation of the trapezius and sternocleidomastoid muscles probably originates in the lower precentral gyrus. The corticobulbar fibers to the trapezius are crossed, and thus one cerebral hemisphere supplies the contralateral trapezius muscle. The course of the fibers controlling the sternocleidomastoid muscle is unknown, but the fibers are thought to terminate chiefly in the ipsilateral nuclei. Three alternative pathways for this ipsilateral innervation have been postulated, as follows [20]:

1. The innervation may be truly ipsilateral with fibers descending ipsilaterally from hemisphere to nuclei.

2. The pathway may start in one hemisphere and cross the corpus callosum to the opposite hemisphere, which, in turn, controls movement on the contralateral side.

3. A double decussation may exist. The pathway to the sternocleidomastoid muscle may cross from the hemisphere to the opposite pons and then return, below the first cervical level, to the side of the cord ipsilateral to the hemisphere of origin [5,27,44].

DeToledo and David noted the following [12]:

1. The XI nucleus has a rostral and a caudal portion.

2. Analogous to the VII nerve nucleus, the rostral portion receives projections from both cerebral hemispheres, whereas the caudal portion is innervated preferentially by the contralateral hemisphere.

3. The caudal XI nucleus innervates the ipsilateral cleidomastoid and trapezius with a predominantly crossed corticonuclear innervation.

4. The rostral XI nucleus innervates both sternomastoids. Each rostral portion receives projections from both cerebral hemispheres. 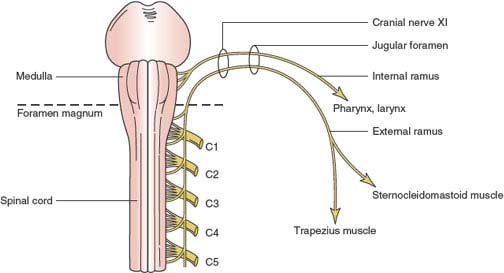 Contrary to the long-held view that the representation of the neck muscles in the motor strip is close to that of the face, Thompson et al. found that the projection to both the ipsilateral and contralateral sternocleidomastoid muscles arises from an area of the cortex high up on the cerebral convexity close to the trunk representation and at a comparable level to the sensory innervation of the neck in the postcentral cortex [62]. The origin of corticomotor projections to this muscle lies in a region of the cortex located between the representation of the trunk and the upper limb. The authors noted that the corticomotor projection to the sternocleidomastoid muscle follows both a fast conducting monosynaptic contralateral pathway and an ipsilateral pathway that may be disynaptic [62].

The spinal accessory nerve supplies two muscles: the sternocleidomastoid and the trapezius.

The trapezius muscle retracts the head and also elevates, rotates, and retracts the scapula. It also assists in raising the abducted arm above the horizontal. This muscle is tested by having the patient shrug his or her shoulders against resistance, and comparing the two sides by observation and palpation.

Unilateral trapezius paresis due to spinal accessory nerve lesions affects predominantly the upper trapezius fibers (the part not supplied by the cervical plexus). The shoulder is lower on the affected side at rest, and the scapula is displaced downward and laterally with its vertebral border slightly winged. There is paresis of shoulder elevation and retraction, and the patient cannot raise the arm above the horizontal after it has been abducted by the supraspinatus and deltoid muscles. Trapezius atrophy often develops with chronic accessory nerve injury; rarely, neurogenic hypertrophy of the trapezius muscle may develop with accessory nerve injury, perhaps due to excessive spontaneous muscle activity [45]. Bilateral trapezius paresis results in weakness of neck extension, with the head tending to fall forward when the patient attempts to stand erect.

Because the spinal accessory nerve is a purely motor nerve (except for some proprioceptive afferent fibers), nerve lesions do not result in sensory disturbance.

In hemispheric lesions resulting in contralateral hemiplegia, the trapezius muscle on the side of the hemiplegia is paretic. However, the head is turned away from the hemiplegic side indicating paresis of the sternocleidomastoid muscle on the side opposite the hemiplegia (i.e., ipsilateral to the cerebral lesion). Focal seizures, particularly those arising in areas 8 and 9 of the cerebral cortex, cause contraction of the ipsilateral sternocleidomastoid muscle as the head turns to the side contralateral to the epileptogenic lesion (adversive seizures). Head turning without head tilting, the most common pattern observed, has been explained as an isolated contraction of the sternomastoid portion of the muscle, with less contribution from the cleidomastoid portion, which tilts the axis of the head forward and toward the ipsilateral side while exerting less rotational force [28]. Because the sternocleidomastoid muscle receives a strong input from the ipsilateral cerebral hemisphere, cortical, capsular, and high brainstem lesions affecting corticobulbar fibers may result in decreased strength on the head turning away from the side of the lesion [44,66].

Cases of dissociated weakness of the sternocleidomastoid and trapezius muscles with neurologic lesions have been described, including several syndromes that are of localizing value [42]:

Head-turning movements have been analyzed in relation to the actions of the two divisions of the sternocleidomastoid muscle: the sternomastoid division and the cleidomastoid division [26]. The sternomastoid division runs obliquely and posteriorly from the sternum to insert on the occiput; it acts mainly on the atlantoaxial joint to rotate the head around a vertical axis so that the face points upward and outward over the contralateral shoulder. The cleidomastoid division originates from the clavicle and runs vertically to insert into the mastoid; it acts mainly on the middle cervical joints below C4 to tilt the axis of the head forward and toward the ipsilateral side, exerting little rotational force. Cleidomastoid contraction thus causes the face to point downward to the same side. When both divisions are activated simultaneously, there is an ipsiversive downward head tilt together with a contraversive rotation of the face. In 12 (75%) of 16 patients with surgically confirmed lateralized seizure foci, the face rotated upward and contraversive to the hemisphere of seizure origin, consistent with activation of the ipsilateral sternomastoid muscle. One patient showed a sustained, downward ipsiversive head tilt consistent with activation of the ipsilateral cleidomastoid muscle, and three patients had a combined ipsiversive head tilt and contraversive face rotation. No patient exhibited ipsiversive upward face rotation or contraversive head tilting, as would be expected if the contralateral sternocleidomastoid were activated. These findings indicate that hemispheric seizure foci activate one or both divisions of the ipsilateral sternocleidomastoid muscle and that accurate lateralization of the seizure focus is possible only when ictal head deviation is assessed in the context of the different actions of the two divisions [28].

These relatively rare lesions result in paresis with prominent atrophy and fasciculations that affect the trapezius and sternocleidomastoid muscles. The motor neurons may be preferentially attacked (e.g., motor neuron disease) or may be involved by intraparenchymal high cervical cord-low medulla lesions (e.g., intraparenchymal tumor, syringomyelia). A nuclear localization is suggested by associated medullary or upper cervical cord dysfunction (see Chapters 5 and 15).

LESIONS WITHIN THE SKULL AND FORAMEN MAGNUM

Lesions of the spinal accessory nerve at the foramen magnum and within the skull also involve neighboring cranial nerves IX (glossopharyngeal), X (vagus), and XII (hypoglossal). Thus, the trapezius and sternocleidomastoid paresis is associated with dysphonia and dysphagia, loss of taste on the ipsilateral posterior third of the tongue, ipsilateral palatal paresis, an ipsilateral depressed gag reflex, ipsilateral vocal cord paralysis, and ipsilateral tongue paresis and atrophy (the protruded tongue deviates to the side of the lesion). A mass lesion in this location may also directly compress the upper cervical cord or lower medulla, resulting in “intramedullary” dysfunction. The most common etiologies for spinal accessory nerve involvement within the skull and foramen magnum include extramedullary neoplasms, meningitis, and trauma.

2. Dysphonia and dysphagia with an absent or depressed gag reflex and a palatal droop on the affected side; paralysis of the homolateral vocal cord

3. Loss of taste over the posterior third of the tongue on the involved side

Lesions affecting the spinal accessory nerve just after it leaves the skull (in the retroparotid or retropharyngeal space) may also involve cranial nerves IX, X, and XII and the nearby sympathetic chain in variable combinations. The resulting syndromes vary and may also be seen with lesions of multiple cranial nerves within the skull and even with intramedullary lesions. Involvement of all four of the lower cranial nerves (IX through XII) results in the Collet-Sicard syndrome (all findings are ipsilateral to the site of injury), which consists of the following:

1. Paralysis of the trapezius and sternocleidomastoid (cranial nerve XI)

4. Loss of taste on the posterior third of the tongue (cranial nerve IX)

5. Hemianesthesia of the palate, pharynx, and larynx (cranial nerves IX and X)

A case of Collet-Sicard syndrome has been described associated with traumatic atlas fractures and congenital basilar invagination [26].

The descriptions of other syndromes involving cranial nerves IX through XII and the sympathetic chain vary widely in the literature; Table 13.1 describes some of these syndromes. Cranial nerves IX, X, XI, and XII may also be variably involved with neuralgic amyotrophy (Parsonage-Turner syndrome) [52].