Because of the unusual presentation, a targeted fascicular nerve biopsy of the medial cord of the brachial plexus revealed a hemorrhagic, enlarged nerve with loss of normal architecture. Teased fibers demonstrated 33% segmental demyelination. Paraffin and epoxy sections demonstrated moderate to severe loss of myelinated fibers with fields of medium-sized, basophilic cells with diffuse granular chromatin with single nucleoli, replacing the endoneurium and epineurium (Fig. 15-2A and B). Immunohistochemistry demonstrated reactivity for CD45, CD33, CD34, myeloperoxidase, lysozyme, and CD117 (c-kit), confirming a diagnosis of GS (see Fig. 15-2C and D). 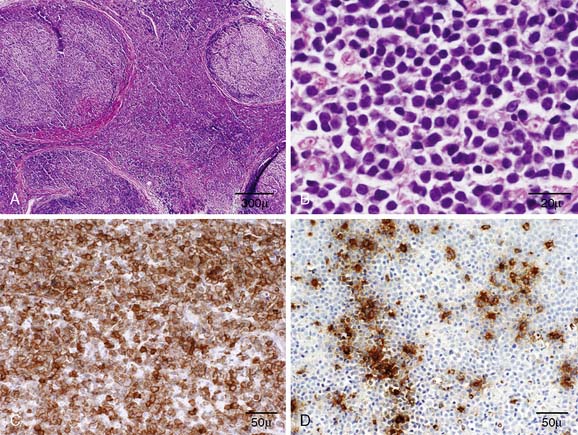 Induction chemotherapy with mitoxantrone, etoposide, and cytarabine was initiated. Twice-weekly intrathecal methotrexate (a total of 12 injections) was given for central nervous system involvement. The patient had a suboptimal response to treatment, with persistent blasts in the CSF. Radiation therapy (20 Gy) in 10 fractions was given from the base of the skull to the upper thoracic region, including the brachial plexus. Repeat examinations demonstrated marked rapid improvement in function of the left hand with corresponding improvement in motor amplitudes on NCS. Cervical spine and brachial plexus MRI scans demonstrated reduction in tumor size.

Fifteen months after the initial evaluation at our institution, the patient developed a dull pain in his left testicle and groin, which steadily worsened over the following 3 months. A burning and shooting pain radiated down his left leg to the knee and a dull aching pain was present in the low back and buttocks. Examination demonstrated mild weakness in hip flexion and toe extension on the left, loss of the patellar reflex, and an area of sensory loss on the lateral thigh. Repeat CSF demonstrated 372 white blood cells, which were blasts, and an elevated protein of 126 mg/dL. MRI demonstrated increased T2 signal and abnormal enhancement involving multiple lumbosacral nerve roots and the plexus (see Fig. 15-1C). PET demonstrated increased uptake in the left L3 root, sacral roots, sciatic, and femoral nerves (see Fig. 15-1D). Bone marrow biopsy demonstrated a normocellular bone marrow without evidence of involvement by acute leukemia. Radiation therapy (20 Gy) was given in 13 fractions from L2 through the sacrum, including the lumbosacral plexus and sciatic nerve. After therapy, numbness in the left C2-C3 distribution developed, along with weakness in right shoulder abduction and external rotation. MRI demonstrated enlargement and increased T2 hyperintensity in the lateral elements of the right brachial plexus. High-dose methotrexate (four cycles) and radiation (20 Gy) to the right brachial plexus led to almost complete resolution of right arm symptoms and impairments.