Handprints from the Past

Abstract
Hands are frequently represented in cave and cliff art found in various locations worldwide. Most well known are the handprints found in caves in southern Europe, primarily France and Spain as well as Italy, Portugal, Germany and the Balkans. Handprints are also found outside Europe, for instance in Australia, North America and South America. The most common are so-called negative handprints, where coloured pigment has been sprayed around a hand placed on a cliff wall to produce a ‘negative’ hand image. In some locations, the images show mutilated hands lacking one or more fingers. The meaning of the hand images is not clear, but they may have been important components of religious rituals. In Sweden hands are frequently depicted in rock carvings in the county of Bohuslän in the southwest part the country. A spectacular rock carving from the late Bronze Age 3,000–3,500 years ago, portraying a man and a woman unified by a large joint hand, symbolises ‘the sacred union’ between the god and goddess of fertility. This carving, like a large number of additional carvings at the site, is covered by heavy vegetation, making them available only to a few experts in the field.
What is the meaning and symbolism of the paintings and handprints from the past that have been found in caves and on cliffs worldwide? The pictures are deeply fascinating and are usually of very high artistic quality. The paintings are dominated by animal pictures, but images of hands are also common. The locations where cave and cliff art have been discovered reflect our ancestors’ migration over the earth after they left the African continent at some time 50,000–60,000 years ago.
Most cave paintings exhibiting animal and hand motifs were discovered in southern Europe, especially in France and Spain [1–3]. Many of them were discovered quite accidentally. When Marcelino Sanz de Sautuola discovered the first paintings in the Altamira cave in Cantabria, Spain, in 1879, the experts of the time believed they were a falsification. Twenty years later it was believed that the paintings in fact represented genuine artistic expressions from our ancestors. Since then almost 350 caves with animal paintings and handprints have been discovered in France and Spain, as well as in Italy, Portugal, Germany and the Balkans [4–16]. The same types of images were also discovered in North and South America, Africa and Australia.
We do not know why our ancestors produced these images and left them for later generations. Perhaps it was all about a religious ritual, a marking of ownership or perhaps a wish to leave a signature behind for posterity. Several of the handprints are located in remote parts of the caves that were not inhabited and could not be reached without great effort. In some caves, one has to crawl several hundred metres through long, narrow passages to reach the handprints. This indicates that the images probably had some ceremonial or religious meaning. Perhaps by printing his hand on the cliff wall, the shaman could force his way to the other side to reach the world of the gods.

The Hand in the Cave

Hand images were created in several ways. Positive hands are actual prints of hands where the palm was covered with a pigment. This type of handprint is relatively uncommon. More common are negative images where the hand has been pressed against the wall of the cave and the surface around it has been coloured with pigment (Fig. 5.1). It is believed that the pigment was sucked into the mouth and then sprayed over the hand and the surrounding cliff wall so that a negative hand image was created [8, 17, 18]. Some images were probably made by artists holding a pigment-filled tube in one of the hands and blowing through the tube to spray the pigment on the rock surface around the splayed target hand [3]. Probably pigment from red ochre (hematite), giving a red colour, and manganese dioxide, giving a black colour, was used. Perhaps the pigment was first dissolved in water to give a better spray effect. In some cases, the pigment seems to have been applied manually to the cliff wall with help of some soft object. 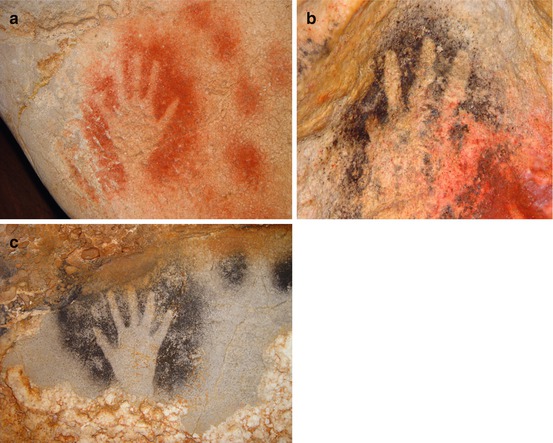 Negative handprints from caves in southern Europe. (a) Pigment of red ochre has been sprayed to colour the rock wall around the hand (Pech Merle). (b) Hand with the little finger partially amputated (Gargas). (c) The rock wall around the hand has been coloured black using mangan powder (Pech Merle) (Photo: Dean Snow)
Most negative handprints were discovered in Spain and France. In the Castillo cave in Cantabria, there are 64 handprints of which 55 are left hands, five are right hands and four are inconclusive. The Gargas and Tibiran caves in the French Pyrenees boast more than 60 handprints, and the Cosquer and Chauvet caves in southern France have a large number of negative handprints. Some date to 27,000 years ago, and others might be older.
There are two types of negative handprints: normal hands and defective hands, lacking one or more fingers or parts of fingers (Fig. 5.1). Many theories have been proposed to explain such images exhibiting injured hands. Most likely the hands were purposely mutilated for some ritualistic reason, perhaps in connection with initiation rites. Such mutilated hands are frequent in the Gargas cave, in the nearby Tibiran cave, in the Cosquer cave outside of Marseille and the Pech Merle cave in southwest France [4]. Most often the little finger is amputated at the level of the first middle joint (proximal interphalangeal joint), but there are also several variants. An alternate interpretation of the mutilated hands is that the people of the Ice Age purposely varied the handprints by flexing the fingers to achieve various patterns – perhaps to be able to recognise their own hands.
Only gold members can continue reading. Log In or Register to continue

Tags: The Hand and the Brain
Oct 29, 2016 | Posted by admin in NEUROSURGERY | Comments Off on Handprints from the Past
Premium Wordpress Themes by UFO Themes
WordPress theme by UFO themes