Vertebral artery, posterior inferior cerebellar artery (PICA), and vertebrobasilar junction aneurysms can pose significant challenges to the neurovascular surgeon. They arise at a region of the skull base that can be difficult to access surgically. Additional complexity arises from how these aneurysms occur in close proximity to the brainstem and lower cranial nerves, as well as the variability in the anatomy of the vertebral artery and PICA as they course through the basal cisterns. These technical challenges, combined with clinical series showing a higher rehemorrhage rate in vertebral and vertebrobasilar aneurysms, have fueled neurosurgeons to develop new skull base approaches, refined pharmacologic brain protection, and new microsurgical techniques since the 1980s. More recently, the advances in endovascular treatment of aneurysms has revolutionized and expanded the neurovascular surgeon’s ability to treat patients with aneurysms in this difficult anatomic location with reduced morbidity and mortality.

There is also a high incidence of fusiform nonsaccular aneurysms at the vertebrobasilar locations, much more frequent than in the anterior circulation. Many of fusiform aneurysms that occur at the vertebral artery are due to dissections and carry with them a high risk for bleeding and of rebleeding once hemorrhage has occurred. Yamaura and colleagues16 found vertebral dissections to account for 28% of posterior circulation aneurysms in their series. The rebleeding rate from ruptured dissecting aneurysms has been reported to be 21% to 71%,16–19 with the highest risk in the acute stage after initial bleeding. Many neurovascular surgeons believe that they cannot be left untreated. Because of their morphology, however, fusiform aneurysms, dissecting or nondissecting, often are not amenable to standard aneurysm clipping techniques. Neurovascular surgeons have been forced to devise alternative treatment strategies for these lesions. One surgical strategy has been deliberate therapeutic occlusion of the parent vertebral or basilar artery, otherwise known as proximal hunterian ligation.20–22 The advent of endovascular approaches has ushered in a new and more promising strategy for treating fusiform aneurysms.23–26 These techniques are described elsewhere in this text and involve proximal endovascular occlusion, lesion trapping, and stent reconstruction. 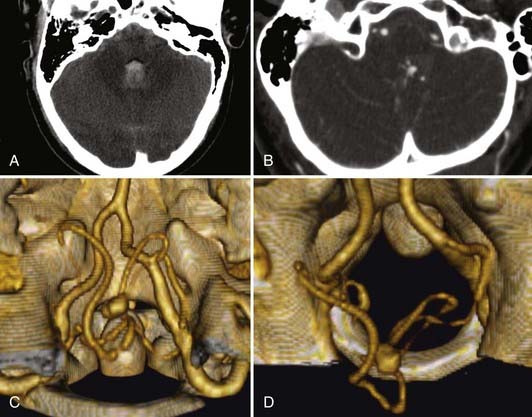 The timing of surgery for ruptured vertebral artery and vertebrobasilar aneurysms is still debated. The International Cooperative Study on the Timing of Aneurysm Surgery30,31 did not include enough vertebrobasilar aneurysm to make any significant conclusions about the timing of surgery for aneurysm at this location. Posterior circulation aneurysms differ from anterior circulation aneurysms in that rarely are emergent life-saving operations for hematoma evacuation necessary, whereas they more commonly are necessary with rupture of aneurysms in the anterior circulation. Ventricular drainage can be a necessary emergent procedure, however, because many patients with rupture of vertebral artery or vertebrobasilar aneurysms have SAH complicated by hydrocephalus. In the current era, early surgical or endovascular treatment of the ruptured aneurysm is generally the rule.

The high management morbidity and mortality associated with surgical treatment of ruptured aneurysms in this location have made neurovascular surgeons reluctant to treat these lesions aggressively in the acute setting. Early surgery often is confounded by a brain that is frequently more swollen with confining exposure, making the delicate perforating vessels difficult to visualize. Also, in the acute period, the aneurysm’s dome may be more friable and at greater risk for intraoperative rupture from manipulation. Although the general trend in the 1990s for anterior circulation aneurysms was early surgery, for posterior circulation aneurysms, most centers at that time adopted a protocol of delayed surgery. A few authors have advocated early surgery, however.2,32,33 The high morbidity and mortality rates associated with early rebleeding argue for early clipping of the ruptured aneurysm. In addition, with the aneurysm secured, the patient may undergo earlier and more aggressive vasospasm management. Hernesniemi and colleagues27 reported 63 patients operated on for ruptured vertebrobasilar aneurysms—36 patients in the first 6 days of SAH and 27 patients in 7 or more days after SAH. Outcomes at 1 year in the early-surgery group were 55.6% good recovery, 16.7% moderate disability, 19.4% severe disability, and 8.3% dead. Outcomes at 1 year in the late-surgery group were 59.3% good recovery, 11.1% moderate disability, 7.4% severe disability, and 22.2% dead. In an untreated group of 30 patients, 1-year outcomes were 6.7% good recovery, 6.7% moderate disability, 3.3% severe disability, and 83.3% dead. Lanzino and associates34 reported their results with a protocol for delayed surgery for vertebrobasilar aneurysms and concluded that early surgery would be preferable. Although they achieved 87% excellent or good surgical outcome and 8% surgical mortality, an additional 41% died under the delayed treatment protocol before reaching surgery. Peerless and associates32 reported an extensive series from 1959 to 1992 of 1767 patients with vertebrobasilar aneurysms. Because of their referral pattern, most of these aneurysms were operated on 14 or more days after SAH. Since 1970, these investigators operated on 206 ruptured vertebrobasilar aneurysm in 7 days or less after SAH. In the 206 early-operated patients, outcomes were 62.6% excellent, 18.9% good, 8.7% poor, and 9.7% dead. Bertalanffy and coworkers33 reported that their group operated on ruptured vertebrobasilar aneurysms in the acute stage. Of 17 vertebrobasilar aneurysms, they reported a 94% good result rate and a 5.9% mortality rate. Arguments for the timing of endovascular treatment of ruptured posterior circulation aneurysms are still in their infancy.

Small case series of mainly anterior circulation aneurysms have supported earlier intervention. Van Loon and others35 reported 11 patients presenting with SAH and poor neurological grades, of which 10 were treated with endovascular techniques within 24 hours. Mean follow-up at 12 months showed 4 patients with good Glasgow Outcome Scale (GOS) scores, 2 who were moderately disabled, 3 who were severely disabled, and 2 who died as a result of uncontrollable intracranial pressure. Of the 11 ruptured aneurysms, 2 involved the basilar artery. While the timing for posterior circulation aneurysms remains under investigation, the data from the surgical literature would suggest favoring earlier intervention. Endovascular techniques allow securing of the aneurysm to prevent the high risk for rebleeding while avoiding the technical challenges of working with a swollen and injured brain. Whether early or late, there is not much question that ruptured vertebral artery, PICA, and vertebrobasilar junction aneurysms should not be left untreated except in the extenuating circumstance in which the patient is medically unstable or the treatment comes at unacceptably high risk. 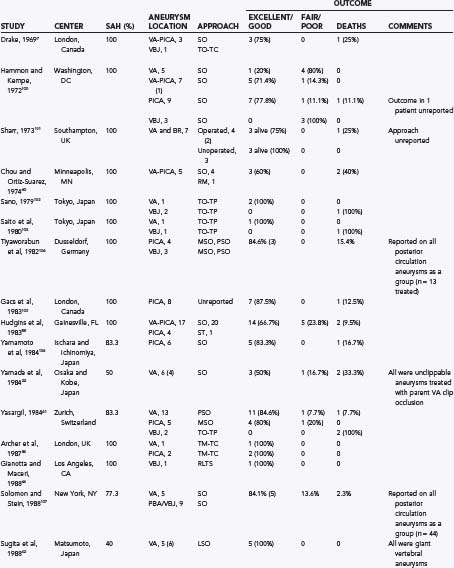 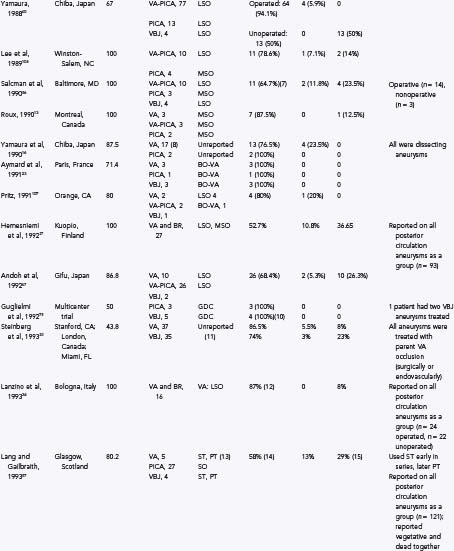 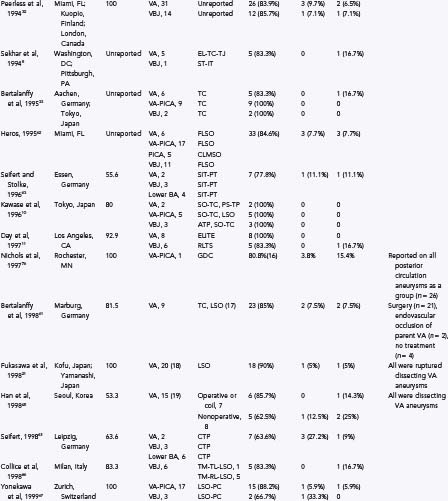 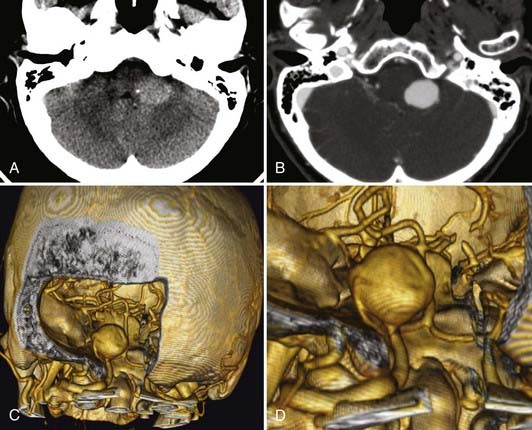 FIGURE 371-2 A 70-year-old woman presented with truncal ataxia and dysmetria. A, Computed tomography revealed a 2-cm right cerebellar mass that was initially thought to be a hemorrhagic tumor. B, On subsequent computed tomographic angiogram, the mass was found to be a partially thrombosed distal right posterior inferior cerebellar artery (PICA) aneurysm.

SAH in these patients is diagnosed first clinically, by history and examination, followed by confirmation with computed tomography (CT). As with the diagnostic evaluation for other forms of SAH, a CT scan that does not reveal hemorrhage must be followed by a lumbar puncture (except when contraindicated) with analysis of cerebrospinal fluid for the presence of blood. At our institution, all patients with SAH are evaluated with a computed tomographic angiogram (CTA) using 0.625-mm cuts on a 64-section multidetector. These thin-slice CT images are then used to reconstruct a three-dimensional computer model that allows for preoperative planning. The ease and low risks associated with CTA have made this technology our first line in evaluating patients with SAH. In a study of 29 patients with SAH by Pozzi-Mucelli and others,43 64-channel multidetector CTA had a sensitivity of 92.8% (26 of 28 aneurysms) and a specificity of 100% in detecting aneurysms, compared with conventional digital subtraction angiography. With the two false-negative results, the aneurysms were 1 to 2 mm in size. McKinney and colleagues44 evaluated 41 patients with 64-channel multidetector CTA and found 92.3% sensitivity in detecting aneurysms smaller than 4 mm and 100% sensitivity in locating aneurysms 4 mm and larger. The diagnosis of vertebral dissection relies on the angiographic findings of a string sign, rosette sign, pearl and string sign, tapered narrowing, occlusion, double lumen, or pseudoaneurysm.45 With angiography continuing to be our “gold standard,” suspicious cases of SAH in which no aneurysm or dissection is detected by 64-channel CTA are followed up with a conventional four-vessel angiogram with rotational angiography and three-dimensional reconstructions as needed.

Current surgical management of PICA, vertebral artery, and vertebrobasilar aneurysms involves considerable preoperative assessment and planning. An interdisciplinary team of neurosurgeons and endovascular interventionalists is needed to evaluate the aneurysm morphology, surgical anatomy, and medical stability of the patient to decide on the best management.

The orientation and projection of the neck and dome are important considerations when planning for surgical clipping. The surgical approach to the aneurysm should be planned such that the neck is encountered before the dome. The size of a vertebrobasilar aneurysm can influence treatment strategy. For example, giant vertebrobasilar aneurysms can be difficult to treat, and many of them are not amenable to standard surgical clipping. Drake and others20,48,49 reported that clipping was impossible in 66% of their 354 giant vertebrobasilar aneurysms. Additionally, giant aneurysms of the posterior circulation have been associated with significantly worse outcomes.48,50,51 The finding of a giant aneurysm on angiography may necessitate further evaluation by CTA or magnetic resonance angiography. In more than 50% of cases of giant vertebral artery aneurysms, there are varying degrees of intraluminal thrombosis, and the angiographic opacity may not show the full size of the aneurysm appreciated on CT scan.48,52–55

Appreciating the bony anatomy of the posterior fossa is important in formulating the best skull base approach to surgically clip an aneurysm. At our institution, we use a combination of thin-slice CT and reconstructed three-dimensional computer models to help us understand the anatomy of the aneurysm, its relationship to perforators and nearby vessels, and the relationship of the aneurysm to the bony structures.

Each approach has advantages and disadvantages. Some standard surgical approaches are hampered by a long working distance and by having to work around the brainstem and through the lower cranial nerve rootlets. For lesions located in the midline, medullary retraction or manipulation can occur, with the risk for stretching lower cranial nerve rootlets. Some approaches can be hazardous at times, especially in situations in which the aneurysm dome is encountered before the neck is fully visualized. The anterior midline approaches (transfacial or transoral transclival) are hampered by high rates of complications, particularly cerebrospinal fluid leak and meningitis. A review of the literature68 found a 50% incidence of cerebrospinal fluid leak, meningitis, or both in all published series using transclival approaches for aneurysms. 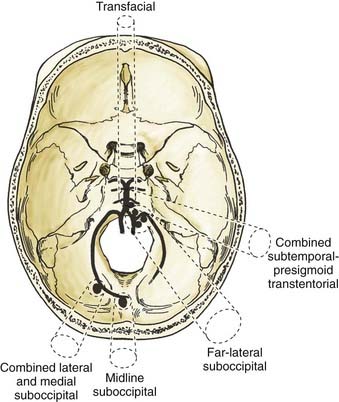 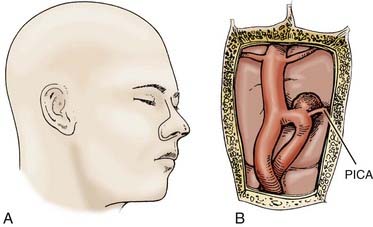