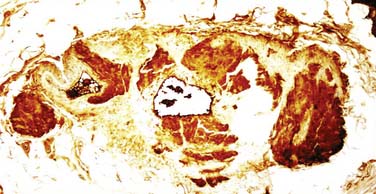 Strength and sensation in his hands and feet improved after a posterior cervical laminectomy and fusion. The strength in the left hand eventually returned to normal. He also noticed increased sweating in hands and feet.

The patient’s age, cardiac involvement, and slow progression of symptoms were consistent with senile systemic amyloidosis. In his case, the cardiomyopathy was symptomatic, eventually requiring pacemaker placement. The absence of variant TTR, monoclonal gammopathy, and chronic inflammatory disease suggested that this was a case of senile systemic amyloidosis polyneuropathy. The “wild-type” nature of the TTR was verified by DNA sequencing and mass spectroscopy studies of the protein.5 The abrupt change in the course of his polyneuropathy was due to a superimposed cervical spondylotic myelopathy.

Symptoms of cervical spondylotic myelopathy (gait difficulties, sensory symptoms in his hands, loss of fine motor skills, and amyotrophic changes) were not immediately obvious in the setting of a chronic polyneuropathy.4 The relatively preserved but asymmetric reflexes on examination, in the setting of a severe polyneuropathy, were likely due to cortical spinal tract involvement. The improvement after cervical decompression confirmed that spondylotic myelopathy, rather than polyneuropathy, was the predominant cause of his symptoms. This case also demonstrates that in senile systemic amyloidosis, a slowly progressive polyneuropathy with multiple compression neuropathies, can be due to the deposition of wild-type TTR amyloid, and the polyneuropathy can precede the cardiomyopathy by many years.