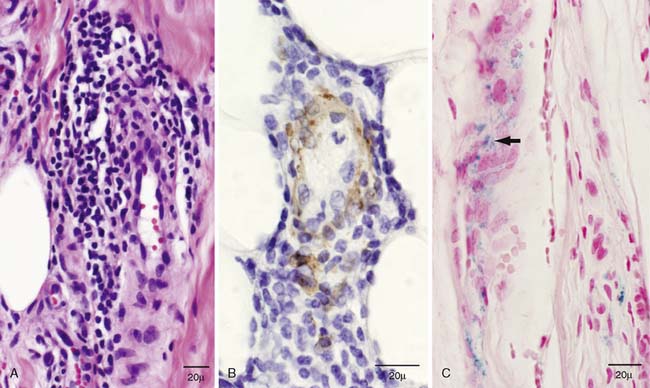 Figure 42-2 Histopathology of sural nerve: evidence of microvasculitis. A, Longitudinal paraffin section stained with hematoxylin and eosin illustrates a moderate-sized epineurial perivascular inflammatory collection with involvement of the vessel wall. B, A different inflammatory collection with clear involvement of the vessel wall is demonstrated with longitudinal paraffin reacted to smooth muscle actin. C, Longitudinal paraffin slides stained with Turnbull blue reveal epineurial perivascular hemosiderin deposits (arrow) that are evidence of prior nerve bleeding.

The diagnosis of inflammatory mononeuropathies secondary to microvasculitis was made. The patient was treated with 3 days of high-dose intravenous methylprednisolone (1 g), followed by weekly doses (1 g), for a total of 12 weeks. In follow-up after the course of intravenous steroids, the patient reported resolution of pain and was able to discontinue opioid medications (she remained on anticonvulsant therapy). Her weakness was mildly improved, but the patient reported a marked increased mobility, which was believed to be due to the combined effects of improved pain and weakness.

Although postsurgical neuropathies are usually attributed to mechanical factors, this case demonstrates that inflammatory-immune factors can play a prominent role. Recognizing the role of microvasculitis in this patient’s neuropathy led to empiric immunotherapy.

Inflammatory-immune factors in postsurgical neuropathies are less well recognized. Arneson and Asbury reported a case series of six patients who developed a generalized Guillain-Barré syndrome within 2 weeks of surgery,3 which was also recognized in a subset of a Guillain-Barré series described by Wiederholt, Mulder, and Lambert.4

Localized inflammatory neuropathies have also been described following surgical procedures. Malamut and colleagues reported on six patients who developed idiopathic brachial plexitis following surgeries remote from the site of surgery.5 They also point out that in the literature, dating back to Parsonage and Turner’s original descriptions, approximately 5% of reported cases of idiopathic brachial neuritis occurred in the setting of antecedent surgery. Polyneuropathy, mononeuropathies, and radiculoplexus neuropathies have all been observed following bariatric surgery.6 Although many of these postbariatric surgery neuropathies were likely due to nutritional deficiencies or mononeuropathies due to compression, an inflammatory role (including possible microvasculitis) was confirmed on sural nerve pathology in some cases.

The molecular mechanisms of postsurgical neuropathy are likely a complex interplay of hereditary and acquired processes, even in the setting of many mechanically induced neuropathies. In some patients, hereditary and acquired tendencies are exposed during surgical stress, resulting in a focal or generalized neuropathy. Recognition of these risk factors will be an important step toward developing targeted preventive and treatment strategies in the future.

In conclusion, it is important for neuromuscular physicians to recognize that not all neuropathies that occur in the postsurgical setting are due to compression, transection, or stretch. If a neuropathy occurs after a delay or in a territory remote from the surgical site, an inflammatory-immune mechanism should be considered, and if possible, a nerve biopsy for confirmation should be performed to ensure that the best treatment is given.