We used serial semithin sections of rat sural nerve to reconstruct longitudinal ensheathment of UFCs. To do this we focused on UFCs widely separated from other clusters so as to more readily recognize them in serial sections. Following three Schwann cell clusters (SCCs) for distance greater than 50% of their internuclear lengths, it was possible to show that a variable number of axons were ensheathed by contiguous Schwann cells (Fig. 73-2). 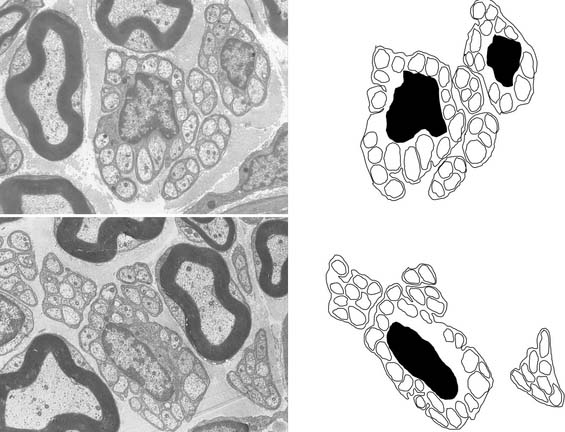 Figure 73-2 With skip serial sectioning of a Schwann cell cluster for a distance greater than 50% of its internuclear length, it was possible to show that a variable number of axons were ensheathed by contiguous Schwann cells.

Our studies, also of teased UFs of sural nerve of rats approximately 300 g in weight, confirm the studies of Peyronnard and associates, and show the clear difference of ensheathment length of UFs and MFs. The internuclear distance of UFCs average about 100 μm, with a range of 50 to 150 μm, whereas the internodal length of MF of the same nerve varied from approximately 200 to 1000 μm.

Present studies on UFCs and MFs of sural nerve of SD rats confirm the studies of Peyronnard and coworkers. The internuclear length of Schwann cells of UFCs is shorter and not overlapping with that of MFs. Typically their length in the former varies from 50 to 150 μm, whereas for the latter, it varies from approximately 200 to 1000 μm. Typically, one Schwann cell ensheaths many UFs, whereas Schwann cells of MFs ensheath only one fiber. Linear arrays of Schwann cells along the length of UFCs ensheath a variable number of UFs. Sometimes, the cytoplasm is a continuous sheet, and at other levels, it is separated into separate islands. These structural differences between UFs and MFs need to be known in interpreting functional and structural alterations in disease.