Temporal bone malignancies arise from different areas: primary from the external ear canal, primary from the middle ear space or mastoid, and secondary from adjacent structures such as the pinna or parotid gland. Primary malignancy of the temporal bone is uncommon, with squamous cell carcinoma being the most common type. As a result of its rarity and lack of uniformity in staging and treatment, an evidence-based multidisciplinary protocol for management of the disease remains elusive. Surgery is the mainstay for cure.

The surgical treatment of temporal bone malignancy has evolved over the past several decades. Earlier attempts to control disease involved mastoidectomy with planned postoperative radiotherapy. Later attempts to achieve better disease control involved en-bloc resection of the temporal bone. There remains controversy among authors regarding the extent of resection necessary to improve 5-year survival while being mindful of quality of life, but there is a common theme of at least en-bloc resection of the lateral temporal bone with added removal of grossly involved medial regions. The surgical goal is negative margins upon completion of the procedure.

Initial evaluation begins with a thorough history and physical examination. Otorrhea, ear pain, and bleeding are the classic triad of symptoms of temporal bone squamous cell carcinoma. These symptoms and a suspicious lesion on examination warrant a biopsy to confirm the diagnosis of malignancy. An audiogram is performed. Radiographic evaluation is used to determine the extent of disease with high-resolution computed tomography (CT) scanning complemented by magnetic resonance imaging (MRI). CT provides excellent bony detail of erosion, whereas MRI provides more soft tissue detail. At least one of these modalities should include a contrasted examination of the neck to identify regional nodal metastases. An otolaryngologist is central to the treatment of temporal bone malignancy, whereas a head and neck surgeon and a neurosurgeon may be consulted for extratemporal and intracranial extension of tumor, respectively. A chest radiograph and liver function testing are performed to rule out distant metastases. From the physical exam and radiographs, the stage of the tumor may be determined; the authors prefer the system described by Arriaga et al and later modified by Moody et al (Table 13.1).

One controversy is whether to resect the internal carotid artery (ICA) to obtain adequate cancer margins. If any manipulation of the ICA is expected, the patient undergoes temporary balloon occlusion with a complementary xenon CT scan to attempt to determine the risk of neurologic deficit with carotid resection. Cerebrovascular studies should demonstrate the patency of the circle of Willis with residual pressure and should also include the venous drainage of the brain, especially in the case where the ipsilateral venous sinuses appear to be involved with tumor and require resection. Patients with poor contralateral drainage may be at risk of venous infarction. Resection of involved dura and brain parenchyma, albeit controversial, may be performed.

Source: From Moody SA, Hirsch BE, Myers EN. Squamous cell carcinoma of the external auditory canal: an evaluation of a staging system. Am J Otol. 2000;21(4):582–588. Reprinted by permission.

Finally, involvement of the jugular foramen and lower cranial nerves should prompt the treating physician to counsel the patient regarding swallowing deficits and potential rehabilitative measures.

Once a resection plan has been formed, a reconstructive surgeon familiar with skull base and cranial defects is involved in planning the wound closure. It is important not to compromise oncologic principles of tumor removal in an attempt to improve reconstructive outcomes. It is, however, reasonable to modify the handling of uninvolved soft tissues, blood vessels, and nerves in a manner that does not “burn any bridges” for the reconstructing surgeon.

A generous shave is performed of the hemicranium and neck. A spinal drain may be placed to decrease the risk of cerebrospinal fluid (CSF) wound leak if dural involvement is expected. An antibiotic with good CSF penetration is administered and maintained for 24 hours. If brain retraction is expected, mannitol, Decadron, and furosemide may be given at the beginning of surgery. Brain parenchyma dissection requires intravenous administration of an anticonvulsant such as phenytoin. The patient is placed supine on the operating room table with the head turned away. If a neck dissection is to be performed, a shoulder role may be placed for slight neck extension. Electrodes are placed in the orbicularis muscles for facial nerve monitoring. If surgical exploration of the jugular foramen is foreseen, neurophysiologic monitoring of the lower cranial nerves can also be performed. The operative site, including the neck, face, and ipsilateral hemicranium, is prepped and draped. Other sites of the body may be prepped and draped for reconstructive purposes.

A C-shaped incision is made 3 to 4 cm behind the postauricular crease, curving to the mastoid tip inferiorly and superiorly, anterior to the tragus. Further extensions of the incision may be necessary anteriorly or inferiorly if infratemporal fossa or neck dissection is planned, respectively. The lateral external auditory canal (EAC) must be separated from the skin flap, requiring a separate incision encompassing the lateral EAC. If the tumor is confined medially, a separate circumferential incision outlining a portion of the conchal bowl and tragus may be made (Fig. 13.1). If a wider, more lateral tumor margin is required, this circumferential incision may be connected to the postauricular incision to encompass the entire pinna within the resection (Fig. 13.2). The inferior limb of the incision may be extended into the neck a variable amount depending on whether control of the great vessels and lower cranial nerves is desired or a neck dissection is to be performed.

Initially, the postauricular flap is raised anteriorly at a level superficial to the temporalis fascia and periosteum. Great care is taken to maintain negative margins while raising this flap. In order for flap elevation to continue anteriorly, the attachment of the skin flap to the ear canal must be crossed. This is accomplished by deepening the circumferential EAC incision until it is continuous with the plane of flap elevation. Frozen sections from the lateral margins on the scalp and facial flap, not from the tumor specimen, are sent to the pathology laboratory. The lateral EAC is oversewn. The flap is carried further anteriorly superficial to the parotid gland, to the anterior edge of the gland. The point at which the temporalis muscle and periosteum are incised to the bone depends on the lateral extent of the tumor and the margin desired. An attempt to stagger this deep incision from the skin incision should be made to facilitate a multilayer closure at the end of the procedure to decrease the risk of CSF fistula. The sternocleidomastoid muscle is detached from the mastoid tip anteriorly and reflected posteriorly to allow access to the posterior digastric and stylomastoid foramen.

A lateral temporal bone resection is used for tumors lateral to the tympanic membrane without involvement of the mastoid. The completed resection has the medial border (from posterior to anterior) of thin bone overlying the sigmoid sinus and posterior fossa dura, the bony labyrinth and facial nerve, the medial wall of the middle ear with promontory and stapes suprastructure intact, and the deep lobe of the parotid gland with overlying facial nerve branches if superficial parotidectomy is performed. The superior border is the mastoid and middle ear tegmen; the inferior border is composed of the infratemporal fossa. The anterior border is variable and ranges from the temporomandibular joint (TMJ) periosteum to the infratemporal fossa, depending on tumor extension.

A wide cortical mastoidectomy is performed with high-speed drills. The mastoid tegmen, posterior fossa dura, and sigmoid sinus are skeletonized. The vertical facial nerve is identified by visualization of its epineural vessels through thinned bone. The facial nerve is followed down to the stylomastoid foramen at which a fibrous sheath around the nerve is encountered. It is best not to dissect the nerve out of this sheath, as attempts to do so will likely compromise its blood supply and result in facial paresis. The lateral and posterior semicircular canals are carefully skeletonized. The infralabyrinthine, retrofacial air cell tract is drilled medially. The bony external auditory canal is thinned, avoiding violation of the tumor. An extended facial recess is opened using a 1.5-mm diamond bur and extended inferiorly between the tympanic annulus and the facial nerve. The chorda tympani is sharply sectioned with this inferior extension (Fig. 13.3).

The facial recess is extended anteroinferiorly, following the tympanic annulus; care must be taken to identify a high or lateral jugular bulb. This dissection is brought forward to the anterior wall of the mastoid tip, to the mandibular periosteum. Superiorly, the middle fossa floor is followed anteriorly into the zygomatic root, “hugging” the bony external auditory canal (Fig. 13.4). The limit of this dissection is the TMJ periosteum (Fig. 13.5). Through the facial recess, the incudostapedial joint is then separated with a small hook or joint knife and the tendon of the tensor tympani is cut. The EAC remains attached to the anteromedial middle ear cavity by the bone just lateral to the eustachian tube. A curved osteotome passed through the facial recess facilitates the detachment of the bony EAC. Care must be exercised with this maneuver as the carotid artery and facial nerve lie just medial to the osteotome (Fig. 13.6).

Fig. 13.3 The bony ear canal is closed, a mastoidectomy has been performed, and the facial recess has been extended. 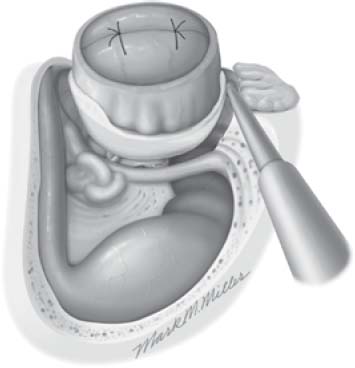 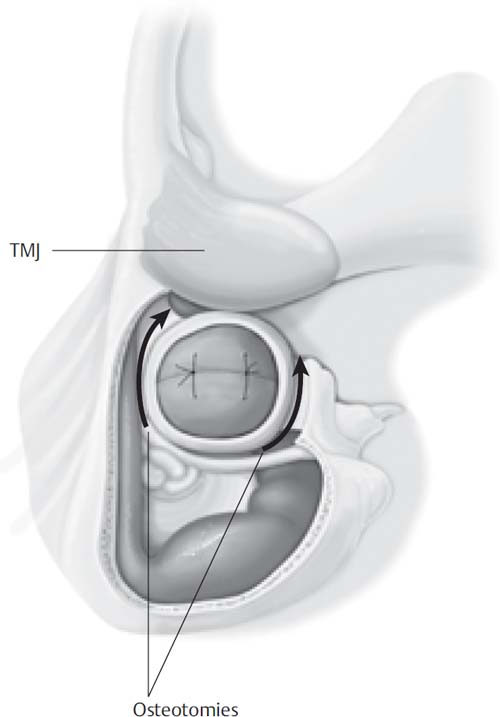 Fig. 13.5 Superior and inferior osteotomies are performed into the temporomandibular joint (TMJ).