Modern neurotology began in the early 1960s when William F. House and others began employing the operating microscope in their approach to the contents of the CPA. Over the years, a multitude of approaches have been described and refined to approach lesions and diseases of the CPA and the internal auditory canal (IAC). Now, neurotologists and neurosurgeons have an armamentarium of operative techniques to approach different areas and pathologies of the CPA and skull base. Some of these approaches can be combined to obtain wider exposure and remove tumors involving both posterior and middle fossae. The use of the operating microscope and the development of these approaches have significantly reduced mortality and morbidity in the treatment of CPA lesions.

The retrosigmoid approach provides a panoramic view of the posterior fossa from the tentorium to the foramen magnum. Access is provided to the cerebellar hemisphere, the lateral aspect of the pons and medulla, and the root entry zone and cisternal course of cranial nerves V to XI. Although exposure superiorly is limited by the tentorium, this approach could be combined with a middle fossa or transtentorial exposure.

The retrosigmoid craniotomy is based on the transverse and sigmoid sinuses. The precise location and configuration of these structures is relatively variable, so attention to the preoperative imaging is critical. Because the anatomy of the suboccipital region is not immediately apparent upon external inspection, an ability to visualize the location of these sinuses is important. The transverse sinus lies along a posterior extension of the Frankfurt line. This is also the level of the superior attachment of the suboccipital muscle bulk. The sigmoid sinus typically runs along the posterior edge of the mastoid process.

Table 5.1 Indications for the Retrosigmoid Approach


Although the sigmoid sinuses are co-dominant in about half of all patients, the right sinus is dominant approximately 40% of the time and the left in the remainder. Special care must be taken when working over a dominant sinus, because injury to such a sinus, and subsequent thrombosis, may be catastrophic. In contradiction to the transmastoid approaches, a far-forward sigmoid sinus is an advantage in the retrosigmoid approach. This is typically seen as a result of a contracted mastoid related to chronic mastoid disease during childhood. Preoperative identification of a contracted mastoid may alter the choice of surgical approach in selected cases.

The focal point of this approach is the porus of the internal auditory canal. Access into the canal can be obtained via drilling of its posterior lip. Drilling is limited by the posterior semicircular canal. Five millimeters of canal can be reliably exposed in all cases without injury to the inner ear; in selected cases, up to 10 mm can be exposed.

The authors administer preoperative antibiotics and continue them for 24 hours post operatively. Intraoperative furosemide and mannitol are given to allow easier temporal lobe retraction. We administer dexamethasone intravenously during the procedure and continue this for 24 hours postoperatively. Long-acting muscle relaxants are avoided during surgery so as not to interfere with facial nerve monitoring.

The patient is positioned lateral on the operating table and is carefully secured to allow rotation of the table. The patient’s shoulder must be taped down to prevent hindrance of the operative trajectory. A Mayfield headholder is used, and the head is positioned in a relatively neutral position, but with gentle flexion and approximately 10 to 15 degrees of derotation. In patients with large shoulders, the vertex can also be tilted downward. In addition to prepping the scalp, an area of abdomen, flank, and back is also prepped. This is done to allow for both harvesting of abdominal fat for grafting and also intraoperative lumbar puncture, if necessary.

A curved incision is made behind the ear, with its vertex about three finger-breadths behind the ear and its bottom below the tip of the mastoid (Fig. 5.1). A scalp flap is raised subcutaneously. This is extended to the periosteum overlying the mastoid. An L-shaped incision is made in the periosteum along the posterior edge of the mastoid and along the superior insertion of the suboccipital muscles (Fig. 5.2). The suboccipital muscles are elevated in the subperiosteal plane and are retracted medially and inferiorly. To obtain sufficient exposure, the flap is undermined posteriorly. Also, exposure and elevation of the digastric muscle from its groove is imperative. The sub occipital muscles can be dissected along their fibers to obtain sufficient inferior exposure. Bleeding from the emissary veins is controlled before drilling.

The dura is opened with a Y-shaped incision with flaps based upon the transverse and sigmoid sinuses (Fig. 5.4). In most cases, cerebrospinal fluid (CSF) will drain from over the surface of the cerebellar hemisphere, resulting in brain relaxation. In some cases, and especially those of larger tumors, flow over the cerebellum is impeded. In these cases, drainage of CSF is facilitated by several maneuvers. First, the patient is placed in the reverse-Trendelenburg position. The inferior cerebellar hemisphere is gently retracted over a cottonoid, and, under the operating microscope, the cisterna magna is entered just inferior to the lower cranial nerves. If this dissection is difficult, therapeutic lumbar puncture can be performed. With the drainage of 20 to 30 cc of CSF, the brain relaxes. 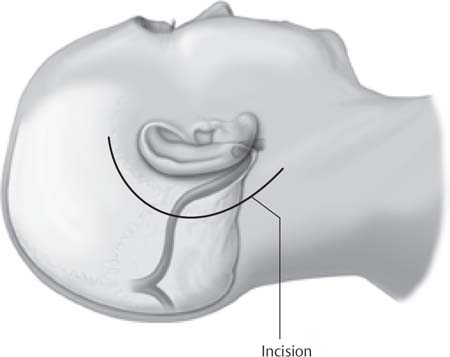