Rick A. Friedman and James Lin

The preauricular infratemporal fossa (ITF) is not directly accessible owing to its lateral borders. In the last half-century surgeons have developed different surgical approaches to the IFTF with improved preservation of function and cosmesis. According to Conley’s classification, lesions that occur in the IFTF may originate as a primary lesion in the IFTF or from any contiguous structures including the aero digestive tract medially, the skull base and neural components superiorly, and the parotid gland laterally. Rarely, a malignancy from another site may metastasize to the IFTF. Because of the varying pathology that occurs in this region, the surgical approach is often tailored to the aggressiveness of the lesion, its extent, and the functional and cosmetic consequences. The preauricular IFTF approach is not suitable for lesions that involve the tympanic ring, jugular bulb, middle or inner ear, or lower cranial nerves.

For the purposes of this chapter, the preauricular IFTF is composed of the region inferior to the greater wing of the sphenoid and the temporal bone anterior to the tympanic ring (Fig. 12.1). This region includes the parapharyngeal space medially and the masticator space laterally; therefore, important contents of the preauricular IFTF include the carotid artery, cranial nerve V3, the internal maxillary artery, the eustachian tube, and the pterygoid venous plexus and muscles. The anterior border of the IFTF is the pterygoid muscles. The neurovascular foramina along the superior preauricular IFTF include the carotid canal, foramen ovale, foramen spinosum, and foramen lacerum. Its lateral borders include the parotid gland and facial nerve, the zygomatic arch, the mandible, and the temporalis and masseter muscles. Mobilizing the structures comprising the lateral border allows access to the preauricular infratemporal fossa.

The diagnosis of infratemporal fossa lesions is often delayed because they are rare and the region is poorly accessible for examination. Patients are more commonly referred from other physicians with radiologic studies in hand. Initially, a thorough history is taken and a physical examination is performed. Special attention is paid to the head and neck and the neurologic examination, especially of the cranial nerves. Varying degrees of facial hypesthesia may occur depending on the amount of trigeminal nerve involvement. Jaw deviation toward the affected side and temporalis wasting resulting from lateral pterygoid and temporalis muscle denervation may also be noted. Trismus secondary to irritation or fixation of masticatory muscles may also occur, which should prompt careful planning for securing the airway before surgery. Eustachian tube involvement may lead to serous otitis media and conductive hearing loss. 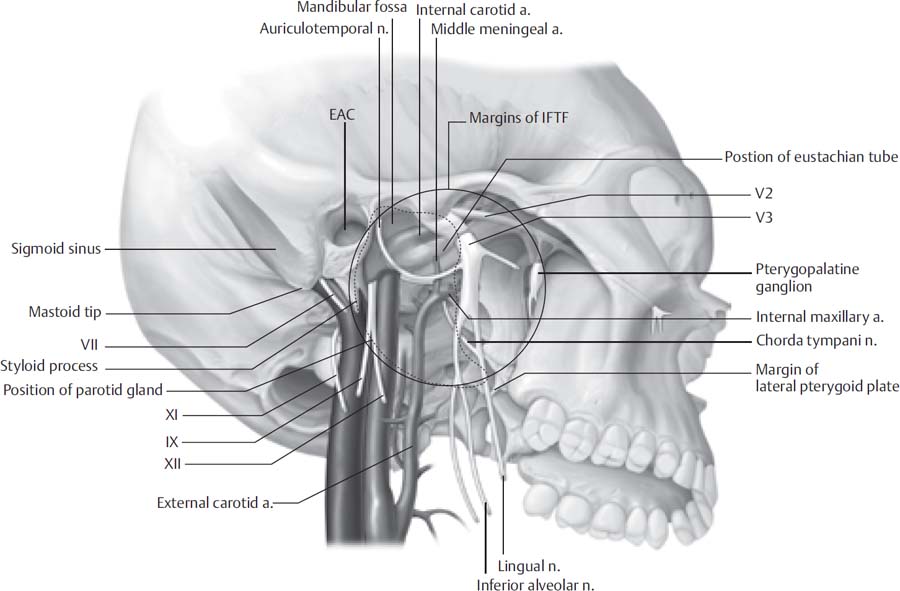 Radiographs provide a great deal of information regarding the nature and extent of the lesion. Both computed tomography (CT) and magnetic resonance imaging (MRI) are performed to evaluate the bony and soft tissue extent of the lesion in the IFTF in the axial and coronal planes. At least one of these imaging modalities should be contrasted. The radiologic characteristics of the tumor may be very suggestive of a pathologic diagnosis, but a tissue sample of the lesion may be necessary. Fine-needle aspiration under image guidance can yield cytologic specimen for diagnosis. Having a tissue diagnosis before the procedure allows the surgeon and patient to better understand the efficacy of surgical resection, the surgical margins required, and the overall prognosis. A pathologic diagnosis also guides the physician to seek adjuvant therapy and to perform a metastatic workup, if indicated.

If the tumor is highly vascular on imaging, then obtaining a biopsy of the lesion is ill-advised. Vasculature of the lesion can be studied with magnetic resonance angiography MRA and/or magnetic resonance venography (MRV) or conventional angiography. The benefit to performing true angiography is that it allows access for the interventional radiologist to embolize the tumor preoperatively, preferably within 48 to 72 hours of resection. If the lesion is amenable to resection and the carotid artery appears to be involved with tumor, then a temporary balloon occlusion (TBO) with xenon CT is performed to determine the risk of cerebral ischemia if the artery is occluded or partially resected. Once the nature and extent of the tumor are determined, a neurosurgeon and possibly a reconstructive surgeon are involved in the operative planning.

The patient shampoos for 3 nights preoperatively with PHisoHex shampoo. On the day of the operation, a generous shave of the ipsilateral hemicranium is traditionally performed; however, for the sake of cosmesis, a 1-cm strip of hair may instead be removed over the planned incision site. After anesthesia is induced, the neurosurgeon may place a lumbar drain if dural involvement with tumor is noted. The patient is then positioned supine on the operating table with the head placed in pins or a May-field head rest, angled 45 degrees away. Electrodes for monitoring of the facial nerve are placed into the orbicularis muscles. If the internal carotid artery is to be mobilized or resected, somatosensory evoked potentials are monitored. The patient undergoes placement of sequential compression devices, a Foley catheter, and an orogastric tube. The anesthesiologist may administer Decadron, mannitol, and/or furosemide if extensive temporal lobe retraction is anticipated. If prolonged temporal lobe retraction or brain parenchyma is expected to be dissected, a dose of phenytoin is given. The patient also receives a dose of IV antibiotics with good cerebrospinal fluid (CSF) penetration such as cefuroxime prior to incision. In patients with cephalosporin or penicillin allergies, vancomycin is the preferred alternative. One percent lidocaine with epinephrine (1:100,000) is injected into the planned incision, and the patient’s ipsilateral hemicranium, neck, and potential donor sites for reconstruction (e.g., abdomen) are prepped and draped. All prepped areas are subsequently covered with Ioban.

The minimum incision planned is a hemicoronal incision with the inferior border extending just anterior to the tragus. If a neck dissection or exploration is planned, the inferior limb of the incision is designed as a Blair-type incision with extension into a cervical crease (Fig. 12.2). The deepest portion of the incision is made superiorly above the temporalis muscles down to bone. The flap is subsequently raised in a subpericranial plane and brought over the temporalis fascia. At the area of the temporal fat pad, the fascia of the muscle splits into a superficial and deep layer, around the fat pad, attaching to the lateral and medial aspects of the zygomatic arch, respectively. The frontal branch of the facial nerve travels within or just deep to the temporoparietal fascia at the level of the superior orbital rim. To protect this nerve branch, the plane of dissection should be transitioned just deep to the superficial layer of the deep temporalis fascia (Fig. 12.3) at the level of the temporal fat pad. Following this plane brings the surgeon to the zygomatic arch, which is freed of its periosteum on its medial and lateral borders with an elevator. Anteriorly, the dissection plane is continued to expose the superior orbital rim and its transition to the anterior attachment of the zygomatic arch. The frontal and trochlear branches exiting their foramina superior to the orbit are identified. 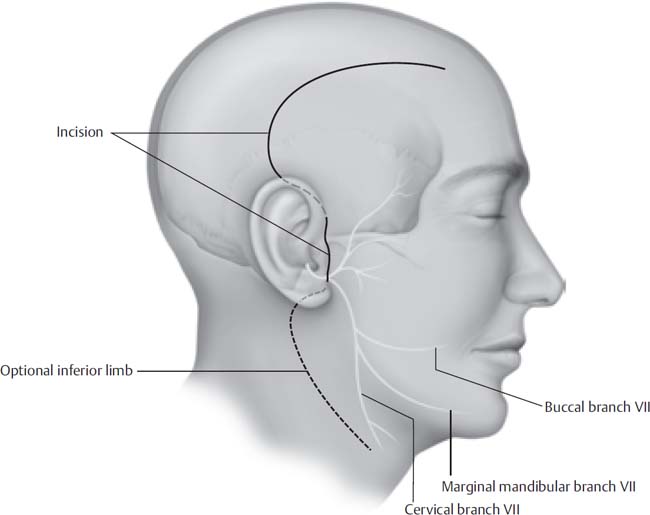 Fig. 12.2 Skin incisions for preauricular infratemporal approach. An inferior extension into the neck provides control of the great vessels when necessary.