The Combined Petrosal Approach to the Petroclival Region

The Combined Petrosal Approach to the Petroclival Region

The petroclival region represents one of the most difficult anatomic areas to approach surgically. Complex vascular and neural anatomy contributes to the technical difficulty of this region. Historically, several variations of approaches to this region have been used, including traditional neurosurgical pterional and suboccipital routes. Lateral skull base approaches have the advantage of decreasing the operative distance to the tumor and adjacent structures while improving the deep “line of sight” and avoiding excessive brain retraction. The combined petrosal approach to the petroclival region allows for these technical improvements. This approach may be customized based on preoperative hearing thresholds, size of the tumor to be extirpated, and age and condition of the patient.

Tumors in the petroclival region often extend into both the middle and posterior cranial fossae. Frequently, because of their location, combined petrosal approaches coupling both a middle fossa approach (i.e., the “anterior” portion of the approach) with a presigmoid posterior fossa approach provide the widest and most direct access to these tumors. The terminology in the literature varies, as many authors have applied different names to the particular exposures that they prefer.

The anterior approach preferred at our center is the extended middle fossa approach. This approach is typically combined with a selected posterior fossa approach. In patients with smaller lesions and good hearing, we prefer the retrolabyrinthine approach (retrolabyrinthine presigmoidal transtentorial approach). In larger tumors, a partial labyrinthectomy (also termed “transcrusal”) approach may be employed. In very large tumors or in patients in whom hearing conservation is not an issue, a translabyrinthine, transotic (without facial nerve mobilization), or transcochlear approach (with posterior mobilization of the facial nerve) may be employed. These approaches remove more bone to increase visualization and improve the angle of approach to the lesion, while keeping brain retraction to a minimum and decreasing the working distance. When the posterior wall of the external auditory canal (EAC) is removed as is done in the transotic or transcochlear techniques, removal of all EAC skin and the tympanic membrane is performed, and oversewing (modified Rambo closure) of the external auditory canal is required.

The combined petrosal approach is utilized to access extensive lesions of the petroclival region. Lesions best accessed via this approach have their origins at the petrous apex, the tentorium, and Meckel’s cave. Petroclival meningiomas are the typically approached in this way. Other clival lesions may also be accessed (Table 8.1). Petroclival tumors that predominantly involve the prepontine cisternal area anterior to the internal auditory canal (IAC) may be approached with an extended middle cranial fossa approach (see Chapter 3). Lesions that extend posterior to the IAC require the addition of a retrolabyrinthine or translabyrinthine addition, depending on the patient’s preoperative hearing. For lesions that extend to the lower clivus/foramen magnum area, the posterior approach may include a far lateral exposure.

Surgical preparation is similar to that for the middle cranial fossa approach. Perioperative antibiotics are administered for 24 hours. Dexamethasone is administered as prophylaxis against edema. Mannitol and furosemide are administered to relax the brain parenchyma and facilitate retraction. Hyperventilation is used as needed. We utilize a Mayfield headholder and rigidly immobilize the patient’s head rotated approximately 45 degrees opposite the side of the lesion. It is important not to overrotate to avoid interruption of venous return via the jugular veins. Exposure and temporal lobe elevation may be facilitated by tilting the vertex slightly downward. Facial nerve monitoring as well as intraoperative auditory brainstem response (ABR) monitoring are regularly employed. Monitoring of additional cranial nerves may be added as indicated.

Because the petroclival region is a small anatomic area with a large number of critical neurovascular structures, great care must be taken to avoid undue morbidity. The surgeon must be intimately familiar with the anatomy of the region, including the anterior and posterior cranial arterial circulation; the location of the cranial nerves, particularly IV through VIII; the venous drainage patterns of the temporal lobe including the vein of Labbé and other potential temporal bridging veins; and the anatomy of the semicircular canals and fallopian canal.

A key difference between the combined petrosal approach and other approaches to the lateral skull base is the sectioning of the tentorium cerebelli. The tentorium cerebelli is the fold of dura that forms a roof over the posterior cranial fossa, except in the anteromedial region where it forms the incisura. Several main pitfalls pertain to the variations in anatomy that can occur in the dural folds of this region, as well as in the venous drainage pattern variations that accompany them. These are discussed further below.

The skin flap is then sharply elevated and retracted anteriorly and inferiorly. Skin clips are typically not used. Dissection anteriorly is taken down to the superficial layer of the deep temporal fascia, elevating the superficial temporal fascia (temporoparietal fascia) with the skin flap to protect the frontal branch of the facial nerve. After subgaleal elevation of the scalp, deep tissue is raised in several layers. The periosteum of the mastoid and along the inferior temporal line is incised, and the suboccipital muscles are elevated medially and inferiorly. The temporalis fascia is incised just below the superior temporal line, and the posterior portion of the temporalis is elevated anteriorly. The entire mastoid is exposed to the digastric groove posteroinferiorly and the root of the zygoma anterosuperiorly (Fig. 8.2). Sutures or rubber band hooks are used to retract the skin and muscle flaps. 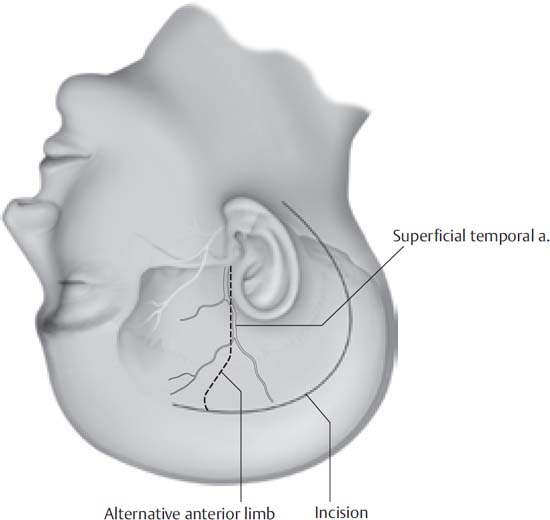 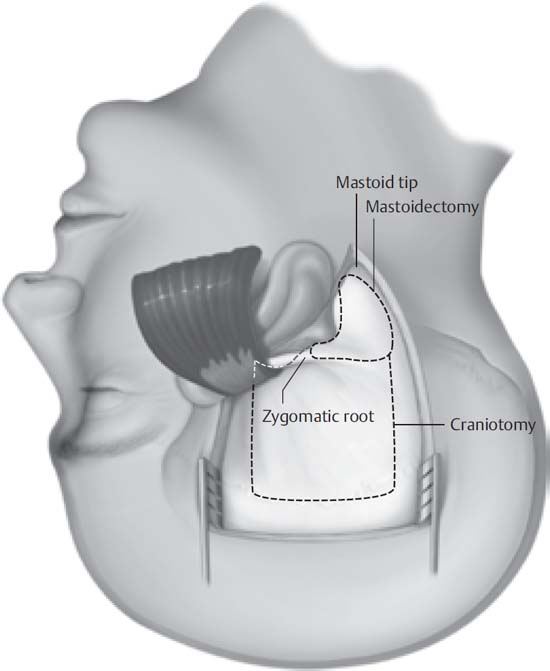 Fig. 8.2 Outline of the posterior and superior craniotomies with the temporalis muscle reflected inferiorly. The superficial temporal artery is preserved, and temporoparietal fascia can be used as a vascularized flap at the time of closure as needed.

Tags: Lateral Skull Base Surgery
Aug 6, 2016 | Posted by admin in NEUROSURGERY | Comments Off on The Combined Petrosal Approach to the Petroclival Region
Premium Wordpress Themes by UFO Themes
WordPress theme by UFO themes