The Transcochlear Approach to Cerebellopontine Angle and Clivus Lesions

The Transcochlear Approach to Cerebellopontine Angle and Clivus Lesions

The transcochlear approach is the most direct surgical route to midline intracranial lesions arising from the clivus, and to cerebellopontine angle masses arising anterior to the internal auditory canal. These lesions may extend around the vertebrobasilar arteries, and, because traditional surgical approaches were limited by the cerebellum and the brainstem, these lesions had been considered inoperable by many surgeons up to the 1970s. The transcochlear approach does not have these limitations and was designed primarily for meningiomas arising from the petroclinoid ridge, intradural clivus lesions, chordomas, congenital petrous apex cholesteatomas, and primary intradural epidermoids anterior to the internal auditory canal.

The transcochlear approach evolved to gain access to the base and blood supply of near-midline and midline tumors. Total removal of these lesions through a traditional suboccipital approach is often impossible because of the interposition of the cerebellum and the brainstem. The transpalatal-transclival approach was attempted for these intradural midline lesions, with little or no success. The exposure through the anterior midline is often inadequate; the field is far from the surgeon; the blood supply is lateral, away from the surgeon’s view; and intracranial complications due to oral contamination can occur. The retrolabyrinthine approach is limited in its forward extension by the posterior semicircular canal. Tumor access with the translabyrinthine approach is limited anteriorly by the facial nerve, which impedes removal of the tumor’s base of implantation, which is anterior to the internal auditory canal, around the intrapetrous carotid artery, or anterior to the brainstem. The development of the extended middle fossa approach and combined transpetrous approach enables complete removal of petroclinoid meningiomas, and is used in patients with useful hearing. The primary limitation with this approach is poor access to tumors with inferior or midline extension.

The transcochlear approach was developed by William F. House and William E. Hitselberger in the early 1970s as an anterior extension of the translabyrinthine approach. It involves rerouting of the facial nerve posteriorly and removal of the cochlea and petrous bone, exposing the intrapetrous internal carotid artery. This approach affords wide intradural exposure of the anterior cerebellopontine angle, cranial nerves V, VII, VIII, IX, X, and XI, both sixth cranial nerves, the clivus, and the basilar and vertebral arteries, without using brain retractors. The contralateral cranial nerves and the opposite cerebellopontine angle are also visible. This wide exposure affords removal of the tumor base and its arterial blood supply from the internal carotid artery.

Table 7.1 Indications for the Transcochlear Approach


In addition, excision and closure of the external auditory canal, as advocated by Brackmann, further increases the anterior exposure for lesions of the petroclival regions and prepontine cistern. Pellet and associates described the widened transcochlear approach for large tumors of the jugular foramen with intrapetrous, intracranial, and infratemporal extensions.

This approach requires no cerebellar or temporal lobe retraction. Exposure and dissection of the petrous apex and clivus beyond the midline allows complete removal of the tumor, its base of implantation, and its blood supply. This is of particular importance in meningiomas. Careful handling and constant monitoring of the facial nerve during rerouting prevents injury to the intratemporal portion of the nerve. However, meningiomas often invade the nerve, and cholesteatomas tend to wrap themselves around it. If the facial nerve is lost during tumor removal, we recommend immediate repair by end-to-end anastomosis or nerve graft interposition. The indications for the transcochlear approach are summarized in Table 7.1.

The main disadvantages of this approach are sacrifice of residual hearing in the operated ear and risk of temporary facial palsy. This technique is used when no serviceable hearing exists in the involved ear or when the tumor is too far anterior for the extended middle fossa craniotomy approach or transpetrous approach. With the use of continuous facial nerve monitoring, the incidence of permanent facial nerve paralysis is low. Risks and complications in the immediate postoperative period include transient vertigo, complete hearing loss, and temporary paresis of cranial nerves VII, IX, X, XI, and XII, as well as infection, bleeding, swallowing difficulties, aspiration pneumonia, cerebrovascular accidents, and death.

Intracranial structures that may be exposed by the classic transcochlear approach include the entire lateral aspect of the pons and upper medulla, cranial nerves V through XI, as well as the midbasilar artery. Its posterior fossa exposure is extensive except inferiorly, where it is limited in the area of the jugular foramen and foramen magnum. The degree to which the neural compartment of the jugular foramen is visible depends on the height of the jugular bulb. Modifications to the transcochlear approach permit identification of the anterior aspect of the pons and both sixth nerves, and improved identification of the basilar artery and vertebrobasilar junction.

A wide mastoidectomy and labyrinthectomy are performed, exposing the internal auditory canal. When first described by House and Hitselberger in 1976, the external canal was not removed and only the facial recess was opened to permit anterior exposure. Brackmann modified the approach by removing the entire tympanic membrane, malleus, incus, and stapes, and performing a blind-sac closure of the external auditory canal, after Fisch. 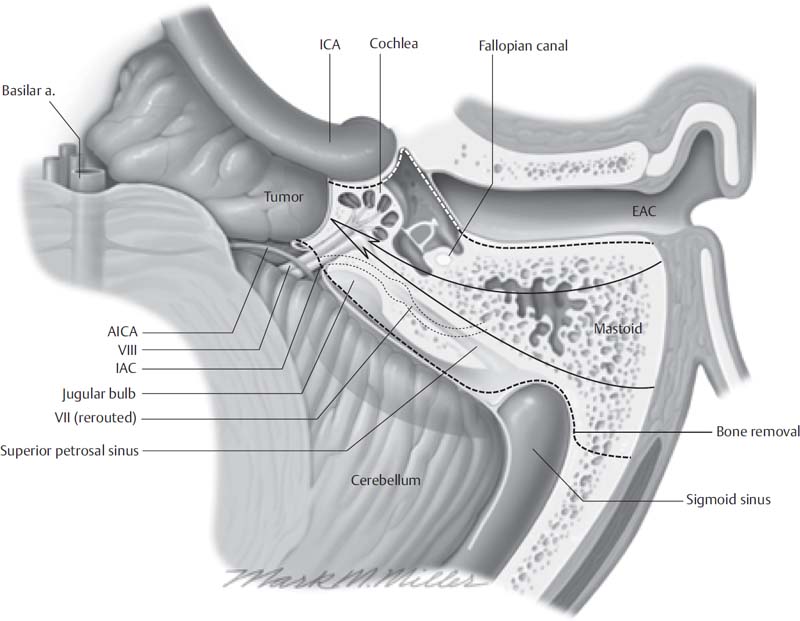 The facial nerve is completely skeletonized, with transection of the greater superficial petrosal and chorda tympani nerves, and it is rerouted posteriorly out of the fallopian canal. The fallopian canal and the cochlea are completely drilled out, and the internal carotid artery is skeletonized (Fig. 7.1). A large triangular window is created into the skull base. Its superior boundary is the superior petrosal sinus; inferiorly, it extends below and medial to the inferior petrosal sinus into the clivus. Anteriorly is the region of the intrapetrous internal carotid artery, and the apex of the triangle is just beneath Meckel’s cave. When the dura is opened, this window gives excellent access to the midline without the need for brain retraction. After tumor removal, the dura is reapproximated with dural silk, the eustachian tube is packed with Surgicel and muscle, and abdominal fat is used to fill the dura and mastoidectomy defects and to cushion the facial nerve.

General endotracheal anesthesia is administered with direct arterial blood pressure monitoring, and a urinary catheter and a nasogastric tube are inserted. Long-acting muscle relaxants are avoided. Intraoperative nerve monitoring is used in all cases. Anesthesia is kept light so that changes in blood pressure and pulse brought about by tumor manipulation are not masked. Prophylactic third-generation cephalosporin antibiotics and steroids are used routinely before the skin incision is made. Venous antiembolism compression boots are placed on the patient’s legs before the procedure begins. 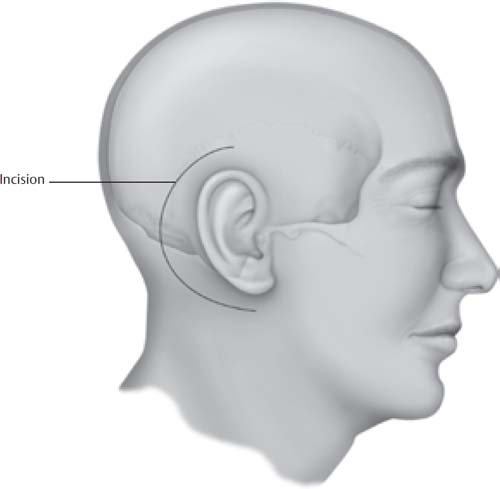