The far lateral approach is less a single surgical approach than a family of approaches that can be tailored to individual pathology as needed. This versatility makes the far lateral approach, and its variations, the approach of choice for lesions of the inferior cranial base, extending from the internal auditory canal (IAC) superiorly to the cervicomedullary junction inferiorly and medially, and from the anterior lip of the foramen magnum to the jugular foramen and infratemporal fossa laterally. Because of the excellent exposure of the anterior foramen magnum and skull base provided by the approach, the far lateral approach can be employed in lieu of the more morbid transoral or transfacial approaches.

Common pathology treated via this surgical approach includes tumors of the cerebellopontine angle inferior to the IAC; glomus jugulare tumors, lower cranial nerve tumors, and other tumors of the jugular foramen; tumors of the inferior clivus; meningiomas of the foramen magnum; lateral and anterior intrinsic lesions of the medulla and upper cervical cord; and vascular lesions such as arteriovenous malformations and aneurysms of the vertebral arteries, posterior inferior cerebellar artery (PICA) origin, or vertebrobasilar junction.

Given this variety of pathology, it is perhaps not surprising that there is also a great deal of variation in the steps described in the literature as constituting elements of the far lateral approach. The first and most important concept in understanding this approach is that individualizing it is critical, and any particular maneuver, such as drilling of the occipital condyle or transposition of the vertebral artery, is not indicated in every case. For example, a large schwannoma of the jugular foramen may require less bony exposure than an aneurysm of the PICA, because in these cases the tumor has “done the dissection” for the surgeon.

Classification of the Far Lateral Approach and Its Variations

The basic far lateral approach can be understood as simply an inferiorly and more laterally oriented retrosigmoid craniotomy. The occipital bone removed for the far lateral approach differs from a retrosigmoid craniotomy, however, in that the craniotomy extends to the foramen magnum. To this basic bone exposure, the following additional maneuvers may be added, depending on the individual case: (1) C1 hemilaminectomy, (2) drilling the occipital condyles, (3) transposition of the vertebral artery (or resection of the C1 transverse process), and (4) resection of the jugular tubercle and/or jugular process (Table 9.1).

Many variations of the far lateral approach have been described, encompassing many different maneuvers designed to increase exposure and obviate any retraction of eloquent structures. The far lateral approach is best understood by simplifying its classification into three categories: (1) the standard far lateral approach, in which a lateral suboccipital craniotomy is extended to the foramen magnum and a C1 hemilaminectomy is performed; (2) the transcondylar far lateral approach, in which the posterior occipital condyle is further drilled; and (3) the extended transcondylar approach, in which in addition to the foregoing additional bone is drilled, including the rest of the condyle exposing the hypoglossal canal, the jugular tubercle, the jugular process, or the transverse process of C1 (i.e., vertebral artery transposition). This classification reflects common clinical practice in that (1) resection of the occipital condyle is not always necessary, and (2) drilling the posterior third of the occipital condyle is usually all that is necessary to provide adequate anterior exposure. The extended transcondylar approach, including drilling of the entire occipital condyle, jugular tubercle, transposition of the vertebral artery, etc. is seldom necessary. 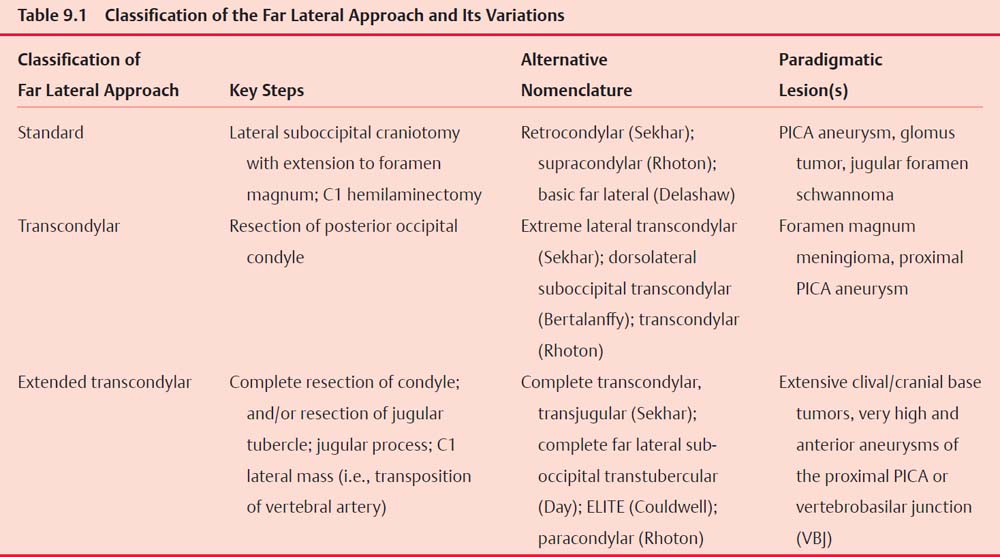 The sternocleidomastoid muscle attaches superficially to the mastoid process and runs anteriorly. The suboccipital muscles have three distinct layers and attach widely to the mastoid and occipital bone. Surgeons should be familiar with the anatomy of the occipital triangles; a standard anatomy textbook should be consulted for this purpose if necessary. In practice, though, this “layer-by-layer” anatomy is not seen, as the muscles of the suboccipital triangle are elevated together from their periosteal attachments.

If the skin incision is extended into the neck for infratemporal fossa dissection, care must be taken not to injure the spinal accessory nerve, which lies anterior to the belly of the sternocleidomastoid muscle and emerges superficially at its anterior border. Similarly, care must be taken in elevating the digastric muscle from its groove in the posterior mastoid. The very anterior aspect of the attachment of the digastric muscle is in close proximity to the stylomastoid foramen and the exiting facial nerve. The occipital artery and nerve run between the middle and deep suboccipital muscles. Generally, it is necessary to divide these to attain sufficient inferior exposure.

Important intradural structures other than the vertebral artery include the lower cranial nerves. The hypoglossal nerve often crosses the vertebral artery at the origin of the posterior inferior cerebellar artery. The accessory nerve joins the vagus nerve, and these two nerves exit the dura together and run posteromedially through the jugular foramen. The glossopharyngeal nerve is usually separated from these two by a dural septum and runs anteromedially through the foramen (Table 9.2).

For resection of lesions of the jugular foramen, we routinely inspect the vocal cords preoperatively via direct laryngoscopy to identify preoperative vocal cord paresis. Patients may present with paresis or even paralysis of a vocal cord without significant hoarseness, particularly if the paresis has developed incrementally and the patient has fully compensated for the weakness. In this case, the risk of symptomatic lower cranial neuropathy is significantly reduced, and radical resection of jugular foramen lesions may be entertained.

When contemplating resecting the C1 lamina, the occipital condyle, or in extended transcondylar approaches, a computed tomography angiogram (CTA) of the neck must be obtained preoperatively. The vertebral artery may have an anomalous course, and hence be subject to a higher risk of iatrogenic injury. For vascular lesions such as aneurysms or arteriovenous malformations, a preoperative CTA may be obtained in conjunction with thin-slice imaging of the entire head to be used for image guidance. This may be particularly useful in partially embolized arteriovenous malformations (AVMs) where the embolisate can serve as a useful guide to feeding vessels. It is not necessary to obtain dynamic spinal imaging unless there is a specific reason to suspect preoperative spinal instability (e.g., erosion of the occipitoatlantal joint by tumor).

Facial nerve monitoring is utilized for all patients undergoing far lateral craniotomy. Glossopharyngeal and vagus nerve monitoring are also performed routinely. Monitoring of the glossopharyngeal nerve is accomplished with an electrode pair carefully inserted in the soft palate, and vagus nerve monitoring, although not consistently reliable, is performed utilizing endotracheal tubes with embedded electrodes. Electrical stimulation of the spinal accessory nerve in the unparalyzed patient results in a palpable shoulder contraction. Electromyography (EMG) electrodes are unnecessary.

Auditory brainstem monitoring is used not only for patients in whom hearing-preservation surgery is performed, but also routinely as a general indicator of brainstem integrity, and is of particular value when dealing with intrinsic brainstem lesions. Spinal cord somatosensory evoked potential (SSEP) monitoring is helpful both to detect long-tract compromise as well as positioning complications, such as brachial plexopathy. Motor evoked potentials (MEPs) are sensitive indicators of brainstem and anterior spinal cord integrity and are required for intrinsic brainstem lesions. Baseline SSEP and MEP runs are obtained prior to positioning.

Perioperative antibiotics (usually cefuroxime 1.5 g IV) are given at the start of surgery and continued for 24 hours. Dexamethasone 4 mg IV q6 hours is also administered. Compression stockings are placed prior to induction of general anesthesia. Due to the use of cranial nerve monitoring, muscle relaxants are avoided or eliminated. If MEP monitoring is utilized, total intravenous anesthesia may be necessary.

The patient is placed in either the lateral position (i.e., modified park bench) or the supine position with the head turned; the latter position is generally reserved for less extensive variations of the approach. In general, the patient should be positioned with the following objectives in mind: (1) to maximize ease of access to the surgical corridor, (2) to facilitate illumination, (3) to promote brain relaxation, and (4) to maximize surgeon comfort. A key factor in determining the ease of access to the surgical corridor is to minimize the degree of obstruction by the ipsilateral shoulder.

For the modified park bench position, the patient is placed in rigid three-pin fixation with a Mayfield head holder while still supine. The patient is then slid up on the table and turned in the lateral decubitus position on an axillary roll and with the dependent arm padded and placed in a sling. A Plexiglas board is extended over the edge of the bed and a beanbag may be used as well, to provide additional support. The head is then rotated 45 degrees toward the contralateral shoulder, flexed such that the chin is near to touching the clavicle, and laterally flexed 30 degrees (vertex down) to increase as much as possible the angle between the mastoid and the ipsilateral shoulder. The sum product of these maneuvers is to bring the clivus perpendicular to the floor, and allow the surgeon to look down the long access of the brainstem and work between the lower cranial nerves.

Multiple skin incisions for the far lateral approach have been described, including “hockey-stick,” “lazy S,” and simple paramedian linear incisions. The traditional hockey-stick skin incision extends from the C2 or C3 in the midline superiorly to the superior nuchal line, then curving anteriorly, laterally, and inferiorly to the mastoid tip. A straight paramedian incision may also be employed, extending roughly from a line bisecting the line between the asterion and the external occipital protuberance to just posterior to the transverse process of C1 (which can usually be palpated readily).

The advantages of the hockey-stick incision over the paramedian incision are (1) the dissection proceeds from medial to lateral, and hence the vertebral artery is approached more safely; and (2) should atlanto-occipital fixation be required, the same midline segment of the incision may be utilized. It is, however, more time-consuming and arguably more traumatic for the patient. The lazy-S style incision is less traumatic and still allows for medial to lateral dissection at C1, but is essentially limited to lesions that do not extend into the infratemporal fossa, such as when there is no need to extend the incision into the neck (Fig. 9.1).

Monopolar cautery is used to develop a plane below the superficial muscle fascia. A small muscle cuff is cut and left attached to the superior nuchal line for reapproximation of tissues at the end of the procedure. The midline dissection is carried down the avascular ligamentum nuchae, and the muscle flap is reflected inferolaterally.

Although many surgeons would not consider a purely lateral suboccipital approach to be a far lateral approach, we include its description here to emphasize that resection of the C1 lamina and/or extension of the suboccipital craniotomy to the foramen magnum are not necessary in every case where a lateral trajectory is desired. 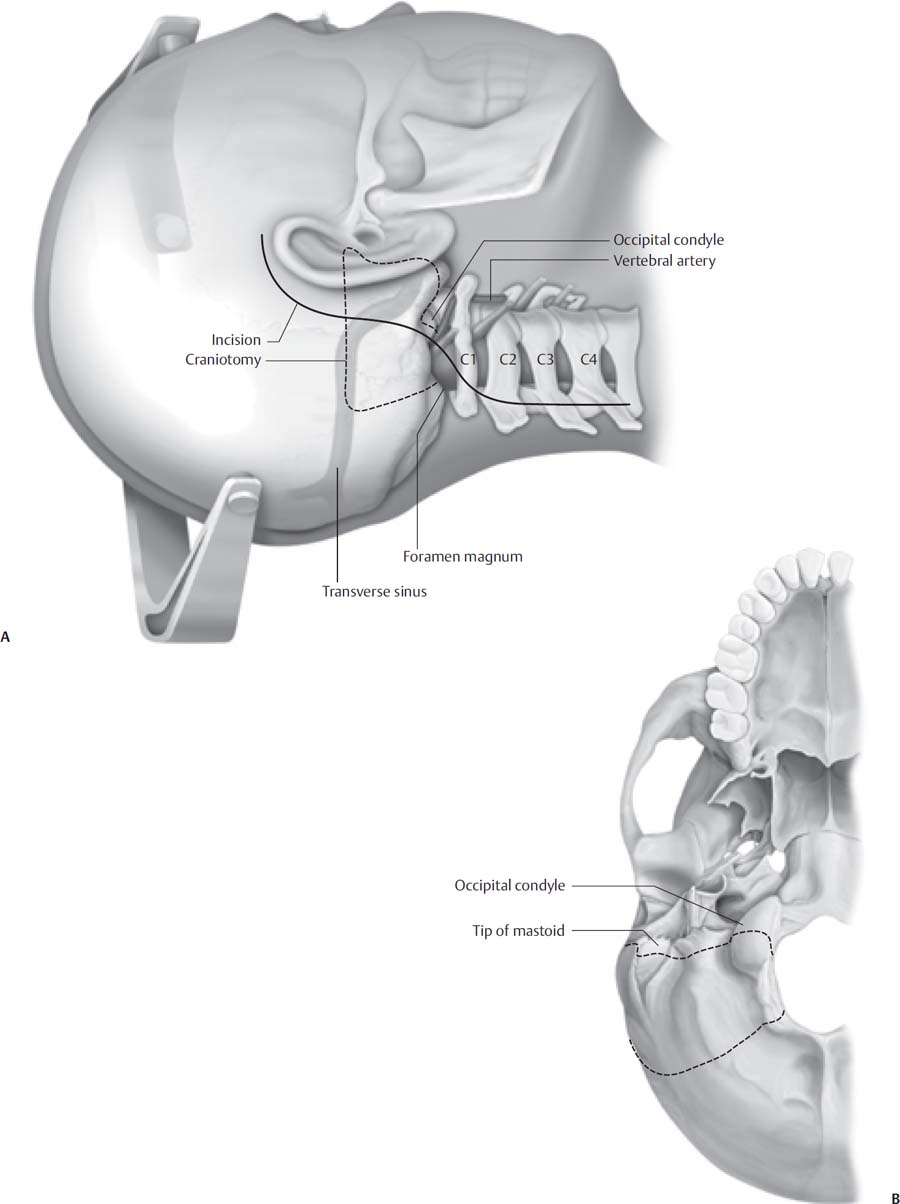 Fig. 9.1 Typical incision and bony anatomy of the far lateral approach. (A) Surgeon’s view. (B) Inferior view. This incision represents an extended “lazy S” and may be modified depending on the extent of bony resection and the type of pathology.