Abstract
This chapter reviews the beginnings of intensive care units and the history of neurosciences intensive care units. The physical presence of a neurointensivist in a neurosciences intensive care unit has been a landmark development, and neurocritical care as a specialty has now finally been established.
The idea of a separate hospital space designed to care for sicker patients evolved gradually over several decades mostly because surgery became more complex. There would be one defining event in the 1950s.
Intensive care units (ICUs) started as “specialized care units” or “respiratory care units.” These units sprung up as a result of a sudden demand for ventilatory support during large scale poliomyelitis epidemics around the world [2, 3, 10]. Expectedly, these epidemics also led to improvement in mechanical ventilation. In the 1950s, Bendixen and Pontoppidan—both anesthesiologists—used their expertise in management of patients with poliomyelitis in Denmark to create a respiratory care unit in Boston’s Massachusetts General Hospital [12].
This reality—being confronted with overwhelming numbers of patients—led to the decision to maintain a unit in the hospital that could care for patients with comparable illnesses.

The Early Days of the Intensive Care Unit

Innovative medical care associated with ICUs has been well chronicled [4, 6, 7, 12, 13, 16]. In the early 1970s, the vast majority of large medical institutions had ICUs constructed in their hospitals. These early ICUs were replaced by multidisciplinary ICUs, trauma units, transplant units, and postoperative care units. Once these specialized areas within a large hospital were established, further development of technology, treatments and standards followed [1]. Some of these were introduced anew (Swann–Ganz catheter), some were developed in the unit (e.g., positioning of the patient during ventilation, nutrition adjusted for critical illness, surveillance of ICU infections). Each unit may have had a different path of development. Hilberman summarized the development of ICUs simply as outgrowths of more demanding care [7]. Thus, surgical recovery units needed for more complex surgeries would become surgical ICUs. Advances in resuscitation techniques and the need to monitor treatable ­cardiac arrhythmias after myocardial infarction would lead to coronary care units [8]. Further specialization came with burn and transplant units. Therefore, the history of ICUs can be approached from different angles. There is a history of units, history of ICU technology, history of understanding and refinements of specific critical illnesses, history of critical care treatments, and even a history of ICU ethics [16].
The role of nursing care has been underappreciated by physicians who wrote the histories. Generally, there is no mention of nursing involvement in historical reviews and more typically historical reviews focus on technological innovations, and a celebration of pioneers in the field. However, nurses were the ones who saw the patient deteriorate and took action, and intensive care and neurosciences intensive care could not have progressed without specialization in nursing care. Critical care nurses started with the establishment of the American Association of Cardiovascular Nurses in 1969, changing to American Association of Critical Care Nurses and specialty certification became necessary. In the United States and Canada, the respiratory therapy specialty emerged and defined its role in overseeing mechanical ventilation and weaning. Other specialty care involved ICU pharmacists, nutritionists, and social work.
The Society of Critical Care Medicine catapulted the specialty into existence and soon training program guidelines appeared in the United States and abroad [5, 14, 15].

The Early Days of the Neurosciences ICU

The history of neurocritical care as a specialty cannot yet be written and, perhaps even the ­history of intensive care is far too premature. (One master historian remarked recently that the time finally has come to write the history of the French Revolution.) Some important developments, however, should be recognized.
As alluded to earlier, the history of neurosciences ICUs undoubtedly started with neurosurgeons performing more extensive surgeries. The beginnings of the neurosciences ICU—defining it as a combined neurology and neurosurgery ICU—are largely unknown and difficult to tease out. Many of these first units were either for neurosurgical or neurologic patients. In a broader sense, little is known about the triage of patients with acute neurologic conditions in those days.
Historically, neurosurgeon Dandy has been credited with opening the first neurosurgical ICU at Johns Hopkins Hospital in 1932. Indeed, Dandy had the fortitude to understand that some neurosurgical patients needed special care, and he chose a ward that he dedicated to the care of the sicker postoperative neurosurgical patients. In London, the Batten Respiratory Unit at the Institute of Neurology and National Hospital for Nervous Diseases opened in 1954 to treat mostly patients with acute neuromuscular disease, as well as those with stroke and spinal cord disorders who required mechanical ventilation [11].
The development of the neurosciences ICU at Mayo Clinic recently has been reported [18] (Fig. 2.1). 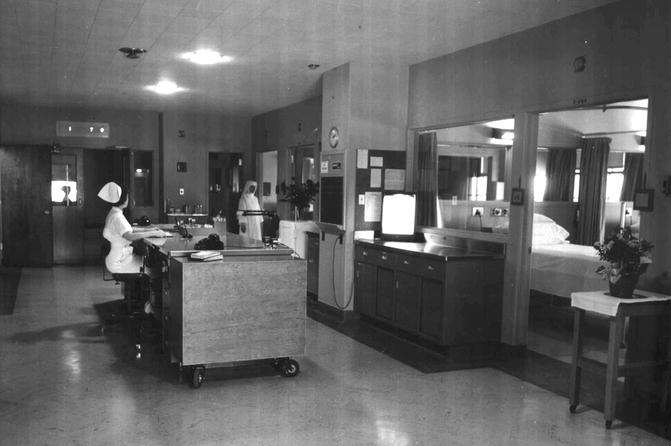 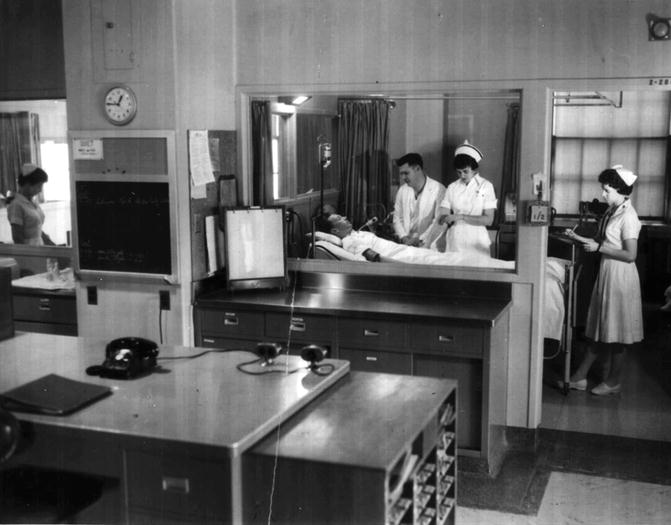