The subtemporal approach to skull base lesions may be utilized to gain access to pathology that extends along the floor of the middle fossa, including Meckel’s cave. Trigeminal schwannomas with significant portions in Meckel’s cave are the paradigmatic lesions for this approach. The elements of the subtemporal approach described in this section may also be combined with the petrosal approach to gain access to trigeminal schwannomas with both large Meckel’s cave and posterior fossa components (dumbbell tumors) or petroclival meningiomas with significant extension along the floor of the middle fossa. Furthermore, the elements of the subtemporal approach can be combined with any of the infratemporal approaches to gain access to tumors that involve both the middle fossa and the infratemporal space, such as trigeminal neuromas extending along the third division through the foramen ovale and invasive skull base meningiomas.

The intracranial key to the performance of the subtemporal approach is an understanding of the anatomy of the petrous apex (Kawase’s triangle). Bone removal is performed anterior to the internal auditory canal and cochlea, posterior to the mandibular branch of the trigeminal nerve, and medial to the carotid artery. The location of the carotid artery can be inferred from the greater superficial petrosal nerve, which overlies it on the floor of the middle fossa. An understanding of the anatomy of the trigeminal nerve itself is also critical, as this nerve can be traced to the foramina through which its second and third divisions pass (foramen rotundum and foramen ovale).

The subtemporal approach, as described, is considered an “extradural” approach. This is actually a misnomer, because Meckel’s cave is an intradural space. The Meckel’s cave dura, however, is an evagination of the posterior fossa dura. For that reason, this approach is extradural in relation to the middle fossa, whereas it is intradural in relation to the posterior fossa.

Facial nerve and vestibulocochlear nerve monitoring is used for all cases, even if pathology does not extend into the posterior fossa, due to the possibility of encountering a dehiscent geniculate ganglion or superior semicircular canal during dural elevation. For large cases, especially with significant brainstem compression, somatosensory evoked potential monitoring may be used as well.

Serial compression devices are used for all patients. Cefuroxime, 1.5 g IV, is administered before the skin incision and repeated if the procedure lasts more than 8 hours. In addition to hyperventilation, intravenous mannitol is infused to facilitate brain relaxation. Muscle relaxation is not used to allow for facial nerve monitoring.

The patient is placed in the supine position and is secured to the table so that it can be safely rotated. We utilize a Mayfield headholder and rigidly immobilize the patient’s head rotated 45 to 60 degrees opposite the side of the lesion. Exposure and temporal lobe elevation may be facilitated by tilting the vertex slightly downward, although if there is extension of the lesion into the skull base and infratemporal space a more neutral position is maintained. The surgeon is seated at the head of the table. The scalp incision is similar to that made for the middle fossa approach; however, the anterior limb of the incision is carried forward to the hairline or beyond, in the case of a receding hairline (Fig. 2.1). 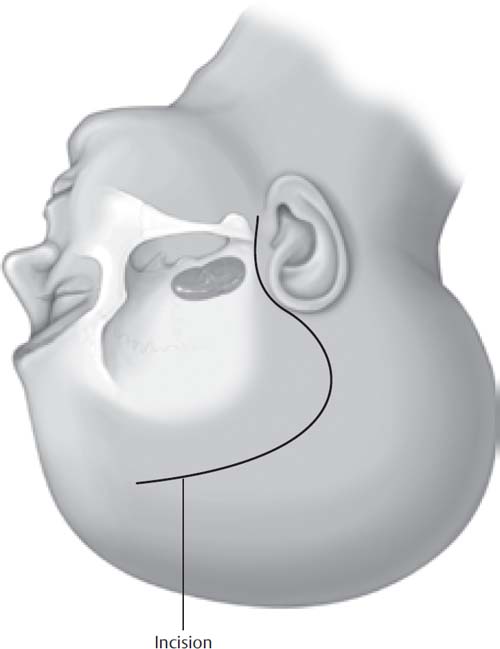 Fig. 2.1 Preauricular scalp incision. The anterior limb of the incision extends forward, at least to the hairline.

Extensive subgaleal elevation of the scalp is required to obtain adequate anterior exposure. Ideally, elevation is carried into the interfascial plane of the two-layer temporalis fascia. It is critical to maintain a plane deep to the fat pad that is consistently seen in this area to avoid injury of the temporal branch of the facial nerve. The root of the zygoma must also be exposed posteriorly. The temporalis fascia is incised just below the superior temporal line, and a relaxing incision is made through the fascia posteriorly. The temporalis muscle is elevated anteriorly. Subperiosteal dissection is performed to fully expose the zygoma at both its root and at the frontozygomatic process. Both the scalp and temporalis flaps can be held forward with perforating towel clips and rubber bands over a rolled sponge. Adequate retraction is necessary and can be facilitated by retracting to a Kerlix roll attached to the foot of the bed.

Although the craniotomy can be performed with bur holes and a craniotome, it is often safer to remove the bone flap entirely using cutting and diamond burs. Care is taken to achieve far-anterior and far-inferior removal of bone. The inferior extent of the craniotomy can be judged from the root of the zygoma, and anterosuperiorly the location of the sphenoid wing can be determined from the external shape of the skull. If the bone flap is performed too posterior or too superior, additional craniectomy can be performed after a cursory dural elevation. The temporalis muscle covers the entire area of bone removal and there is unlikely to be significant additional cosmetic problems (Fig. 2.2).

Extradural elevation is performed along the entire floor of the middle fossa extending anteriorly toward the temporal tip. Care is taken to identify the greater superficial petrosal nerve and the region of the geniculate ganglion, which may be dehiscent. Dissection in this area may be facilitated by exploring with a facial nerve stimulator using high stimulus intensity. Anterior exposure is augmented by coagulation and division of the middle meningeal artery at the foramen spinosum (Fig. 2.3). It may be necessary to pack this foramen to adequately control bleeding. We also use a diamond bur to fully expose the second and third divisions of the trigeminal nerve at their respective foramina. If possible, dural elevation is carried medially to the petrous apex in a manner identical to that done for the middle fossa approach. The bone in this area may be eroded by a schwannoma or other expansile tumor, and care must be taken to recognize and avoid injury to the carotid artery if it is dehiscent. The temporal lobe is elevated extradurally using a self-retaining retractor. 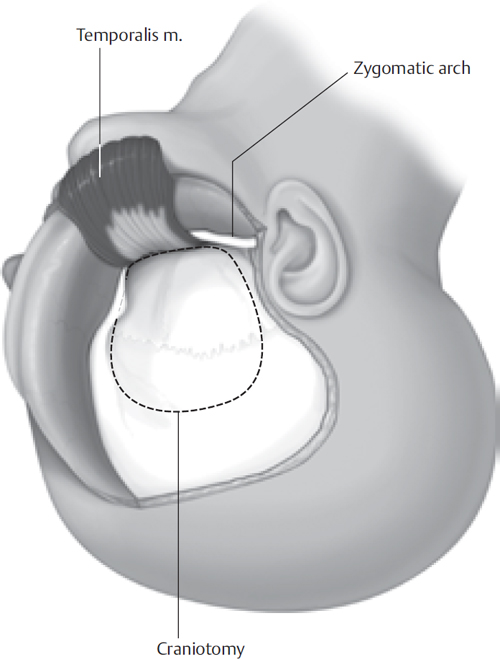 Fig. 2.2 Scalp and temporalis muscle flaps. The zygoma is exposed both at its root and at the frontozygomatic process. The bone flap is centered on the middle fossa and extends from the greater wing of the sphenoid to the floor of the middle fossa.