Histology with immunohistochemistry revealed a moderate increase in epineurial lymphocytes, mostly in a perivascular distribution (Fig. 47-2A and B). In the endoneurium, macrophages were arranged in clusters around capillaries (see Fig. 47-2C), indicating a likely immune-mediated inflammatory etiology.3 Semithin sections revealed a moderate decrease in fiber density and numerous thinly myelinated axons suggestive of previous demyelination and remyelination (see Fig. 47-2D). Furthermore, epineurial vessels with thickened and pathologic walls with disorganization of the regular mucularis and endothelial layers were detected (see Fig. 47-2E). 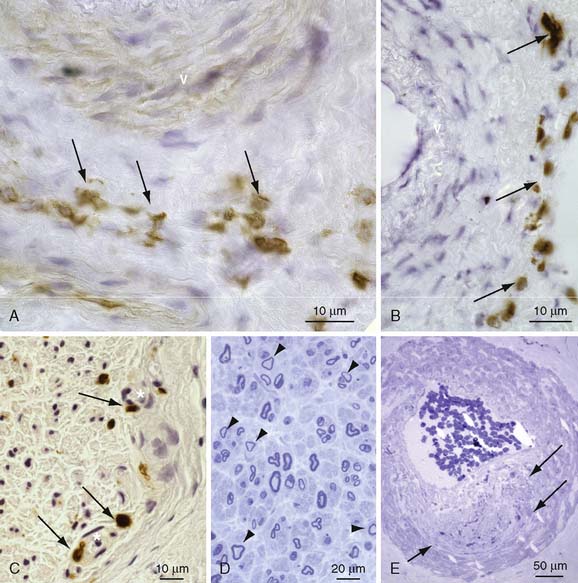 Congo red staining for amyloid was negative. Together with the clinical presentation and the neurophysiologic findings, the tentative diagnosis of a painful chronic immune sensory polyneuropathy (possibly atypical CIDP) with additional angiopathic changes was made and an immunosuppressive therapy was initiated.

The patient first received an intravenous (IV) methylprednisolone pulse therapy (500 mg × 3 days), which promptly reduced dysesthesias and pain, but which lasted only for a few days. Subsequently, intravenous immunoglobulin (IVIg) infusions (36 g × 4 days) were also effective; in the further course, repeated IVIg infusions became necessary every 4 weeks, when severe acral dysesthesias and pain reappeared. Later, IVIg treatment was combined with azathioprine (alternating 150–200 mg/day) and cyclosporine A (300 mg/day), but no sparing of IVIg or extension of the infusion intervals were possible. Despite these treatments, the patient’s motor symptoms initially worsened for several months to an extent that he was no longer able to climb stairs or hold a book in his hands. Numbness in the hands and feet increased. Clinical worsening was paralleled by further pathologic findings in nerve conduction studies, for example, additional conduction blocks at the right median and tibial nerves, such that the patient then fulfilled established CIDP-criteria.2 It took 1 year of repetitive IVIg infusions in combination with azathioprine and cyclosporine A treatment before the patient eventually reported stabilization of symptoms and another 6 months before symptoms and signs gradually improved to near remission. After more than 2 years, he was able to walk normally and climb stairs, and numbness and dysesthesias were present only in the toes and fingertips. Pain and muscle cramps had disappeared. IVIg intervals were stretched to 6 weeks and then to 3 months without progress in symptoms. Also the neurologic and electrophysiologic examination revealed improvement; only a partial conduction block was found at the left tibial nerve approximately 2 years after initiation of treatment (see Fig. 47-1C).