Most strokes are secondary to thromboembolic arterial occlusions.1–4 Therefore, a main goal of therapy in acute ischemic stroke is rapidly to restore an adequate blood flow so as to minimize tissue damage and thereby decrease neurologic morbidity and mortality, with resultant decreases in neurologic disability and improved quality of life. Normal cerebral blood flow (CBF) to the adult brain requires cerebral perfusion rates of approximately 60 (50 to 70) mL/100 gram of brain tissue per minute.2 If the CBF is decreased below 15 to 20 mL/100 gram of brain tissue/minute, ischemia with irreversible death of brain tissue occurs. Within the region of ischemia there is a core zone where neuronal death occurs quickly and a surrounding zone where the degree of ischemia is less severe. This so-called ischemic penumbra represents tissue at risk that is, however, salvageable with prompt reperfusion procedures.1,2 Even in instances where reperfusion cannot be fully reestablished in the core region of ischemia, mechanisms to salvage the surrounding territories (the so-called “ischemic penumbra”) serve to minimize stroke severity. Numerous neuroprotectant agents to prevent further neuronal death have been studied, but as yet no clinical trials have successfully identified an effective neuroprotectant agent.1 Most interventional strategies for acute ischemic stroke are currently designed to promote rapid perfusion of brain tissue or to treat the complications of brain swelling poststroke.

Rapid diagnosis of acute ischemia is essential for patients to receive timely and appropriate therapies. In 1997, a national institutes of neurological disorders and stroke (NINDS) conference highlighted the need for effective and organized stroke systems.5 The conference recommendations emphasized the key factors for stroke systems including: early recognition of eligible stroke patients, early consideration for activation of a stroke team, and establishing standing orders for patients with stroke. Time frames were specified as targets for evaluation times of stroke patients, with the intent of optimizing the screening process of possible stroke thrombolytic candidates (Table 10-1).

Certain basic principles apply to the immediate management of stroke patients. These principles are well elucidated in two American Heart Association (AHA) guidelines on early management of acute ischemic stroke.3,4 Rapid clinical assessment by physicians skilled in assessment of stroke patients is essential. Severity of stroke can be determined by the National Institutes of Health Stroke Scale Score (NIHSS).6 The NIHSS is a quick and useful prognostic tool that is used by many United States vascular neurology (stroke) specialists. Sixty to 70% of patients with a baseline NIHSS <10 will have a favorable outcome in 1 year, compared with only 4% to16% of those with a score >20 (an NIHSS of 0 is normal; minor strokes typically are associated with an NIHSS <4).3,6 Early imaging using CT or MRI to identify possible intracranial hemorrhage or signs of early cerebral ischemia is mandatory. When available, perfusion and diffusion-weighted MRI and gradient echo imaging may be of particular utility in distinguishing acute ischemic strokes and hemorrhages. As noted in the AHA guidelines, relying on MRI availability, outside of clinical research study, should not delay urgent systemic thrombolysis.

Treatment to lower arterial hypertension should generally be avoided in patients with acute ischemic stroke.3,4 Current guidelines recommend no treatment of blood pressure for patients with systolic blood pressure less than or equal to 220 mm Hg or diastolic pressure less than or equal to 120 mm Hg, unless there is evidence of other major end-organ damage such as aortic dissection, acute myocardial ischemia, pulmonary edema, or hypertensive encephalopathy. Physicians should only consider cautious reduction of blood pressure in acute stroke if a patient is otherwise eligible for thrombolytic therapy but has a systolic pressure >185 mm Hg or diastolic pressure >110 mm Hg. Data for volume expansion may be reasonable but, as yet, drug-induced hypertension to improve cerebral blood flow is still unproven for acute ischemic stroke, though two pilot studies have described a role for drug-induced hypertension.7,8 Phenylephrine was the preferred agent in both studies. Titration of blood pressure with phenylephrine was assessed neurological improvement by the NIHSS or to a mean arterial pressure of 130 mm Hg for the first study.7 The target systolic blood pressure goal of the second study were either 160 mm/Hg or an increase of 20% above the admission systolic blood pressure (up to a maximum systolic pressure of 200 mm/Hg).8

Other important general principles in the care of acute ischemic stroke patients include admission to a stroke unit, neurointensive care unit, or other monitored setting, aggressive management of hyperglycemia and hyperthermia, and prevention of medical complications including cardiac dysrhythmias, aspiration pneumonia, urinary tract infections, and deep venous thrombosis, along with early mobilization of patients through a comprehensive rehabilitation program.

Subcutaneous or intravenous unfractionated and low-molecular-weight heparins have not been shown to be effective in acute or progressing stroke.9–12 A post hoc analysis only, from the TOAST study of the low-molecular-weight heparinoid ORG 10172 (danaparoid), hinted at a somewhat more favorable outcome for those patients with >50% stenosis or ipsilateral occlusion of the internal carotid artery who received danaparoid.13,14 At 7 days post-stroke there was a 53.8% favorable outcome for danaparoid versus 38% for placebo (p = .023) and a 68.3% favorable outcome for danaparoid versus 53.2% for placebo (p = .021) at 3 months. As a matter of routine, unfractionated heparin should be avoided in most clinical circumstances except for cerebral venous thromboses 9,12). Low-molecular-weight heparins or heparinoids after acute ischemic stroke may be associated with decreased rates of deep venous thrombosis in acute stroke, but no conclusions can be drawn for other outcomes.9

The seminal NINDS rt-PA study involving 624 patients randomized to either 0.9 mg/kg of t-PA or placebo showed that systemic intravenous (IV) thrombolysis with t-PA within 3 hours can be an effective treatment strategy.15 Nearly 30% of patients are likely to have minimal or no disability at 3 months. The number needed to treat (NNT) was 8 strokes treated, to yield 1 patient with no disability.15,16 The risk of hemorrhagic complications was 6% in the NINDS series; achieving these results with similar low complication rates has been duplicated in several clinical series published since 1995.17 Patients treated with t-PA were ~30% more likely to have minimal or no disability, as compared with patients treated with placebo. This should be tempered, however, by awareness that the benefit/risk ratio may be lower for those patients with more severe strokes.16,18 There was no increase in mortality with t-PA in the NINDS trial, and even with an increase in symptomatic hemorrhages with t-PA versus placebo; there was a clear benefit for treatment.15 Predictors of favorable outcome included treatment within 90 minutes of symptom onset, normal baseline CT scan, milder baseline stroke severity, no history of diabetes mellitus, as well as a normal pre-treatment blood glucose level and a normal pretreatment blood pressure. Predictors of less favorable outcome and/or cerebral hemorrhage included: extended hypoattenuation with mass effect or hypoattenuation in > a third of the middle cerebral artery (MCA) territory on pretreatment CT scan, increasing age, higher doses of t-PA, diabetes mellitus, pretreatment blood glucose level >11 mmol/L, marked elevation of blood pressure (especially diastolic) before, during, and after treatment, hypertension requiring postrandomization antihypertensive treatment, severe pretreatment neurological deficit, and protocol violations, according to the NINDS study protocol.15,18

For acute ischemic stroke, the dose is 0.9 mg/kg IV not to exceed 90 mg with 10% of the dose given as an initial bolus over 1 minute, with the remainder of the dose over the ensuing hour.15 Intravenous t-PA is particularly effective when initiated early.19 Intravenous t-PA, given within 90 minutes, has a more favorable outcome as compared with treatment initiated within the 91- to 180-minute window. A pooled analysis of thrombolytic trials showed an adjusted odds ratio for favorable outcome of 2.81 (CI, 1.75–4.5) at 90 minutes and 1.55 (CI, 1.12-2.15) when administered between 91 and 180 minutes.19 Whether there is a window beyond 3 hours for selected patients remains unproven; in the selected pooled analysis, the odds ratio for favorable outcome beyond 3 hours was 1.4 (CI, 1.05-185) when administered between 181 and 270 minutes and 1.15 (CI, 0.9-1.47) when administered from 271 to 360 minutes. The hazard ratio was around 1.0 for the 0 to 90, 91 to 180, and 181 to 270 minute intervals; it was, however, increased for the 271 to 360 minute interval at 0.45 (1.02 to 2.07). The Cochrane Review of thrombolytic trials reported an OR for fatal ICH of 3.60 with t-PA and the OR for symptomatic hemorrhage was 3.13.20 In the pooled trials of t-PA (time window up to 6 hours), there was a nonsignificant increase in death equivalent to 19 excess deaths per 1,000 treated; despite this, the OR for death or disability was only 0.80, equivalent to 55 more independent survivors per 1,000 treated.19 The Cochrane meta-analysis of the t-PA trials, however, probably overstates the complication rate of IV t-PA, as it includes trials that enrolled patients beyond the currently accepted 3-hour window. Strict adherence to a specified protocol, with close attention to inclusion and exclusion criteria, is therefore essential.

Currently, only 2% to 3% of ischemic stroke patients in the United States receive IV t-PA but successful centers have treated up to 15% to 20% of ischemic strokes with thrombolytic therapy. Katzan et al have described the Cleveland experience in which, in 1997 to 1998, under 2% of all ischemic stroke patients received IV t-PA, and upwards of 16% had symptomatic intracerebral hemorrhage (ICH) with a 6% fatality rate.21 Overall, half the patients treated showed deviations from national treatment guidelines. However, Katzan et al subsequently reported that, following a systematic revamp of the approach to acute stroke, the Cleveland network treated close to 18% of all patients with t-PA, with a symptomatic ICH rate similar to that of the NINDS study; yet protocol violations occurred in 19% of all treated patients.22 These reports illustrate that development of systematic approaches with unified stroke teams can yield dramatic success stories.

Intravenous systemic thrombolysis with t-PA is the only FDA-approved thrombolytic approach at this time. The bleeding complications of systemic thrombolysis with t-PA, especially as related to those specified contraindications, would otherwise exclude those patients beyond the 3-hour time window or patients who underwent surgical procedures. As a result, alternate strategies using catheter-directed intra-arterial (IA) thrombolysis have been applied to these patients. Essentially, it has been suggested that this would allow an extension of the time window for IA thrombolysis beyond the 3-hour window of IV t-PA, and might be particularly effective for proximal large vessel occlusions such as the basilar artery or proximal MCA.23–27 As such, IA thrombolysis has been pursued as an alternative strategy to treat patients with large strokes with longer time windows.

The PROACT-II study showed that IA thrombolysis, using a pro-drug of urokinase in patients with large MCA occlusion treated within 6 hours of symptom onset, resulted in greater likelihood of vessel recanalization and clinical improvement.23 Prourokinase (ProUK) was evaluated in this double-blind randomized trial of IA therapy for MCA occlusion in 180 patients who were randomized to IA proUK plus heparin or heparin only. All randomized patients received a 2000-unit IV heparin bolus and a 500-U/hr infusion for 4 hours beginning at the time of angiography. Heparin flush solutions for angiography contained 1 U/mL heparin in 0.9% sodium chloride and were infused at 60 mL/hour. Otherwise, antithrombotic agents were prohibited for the first 24 hours. Forty percent of the proUK versus 25% of control patients had good outcomes (p = .04). The recanalization rate was 66% with proUK versus 18% for the control group (<0.001). Intracranial hemorrhage (ICH) was higher for those patients treated with proUK; ICH occurred in 10% of proUK patients versus 2% of control patients (p = .06). The results of this single, well-designed randomized trial were insufficient for approval of this agent in the United States, but it has stimulated many advanced stroke centers to utilize approved tissue plasminogen activators including t-PA, reteplase, and urokinase on an off-label basis in patients with acute ischemic stroke who would otherwise not be eligible for IV thrombolysis. It is also important to note that the actual time window for IA thrombolysis is not well established. In the PROACT study, MCA strokes were treated within 6 hours of symptom onset. However, some case series suggest that anterior circulation stroke might be treated up to 8 hours following symptom onset, and the window for posterior circulation occlusions is potentially longer, approaching 12 to 24 hours.24–27 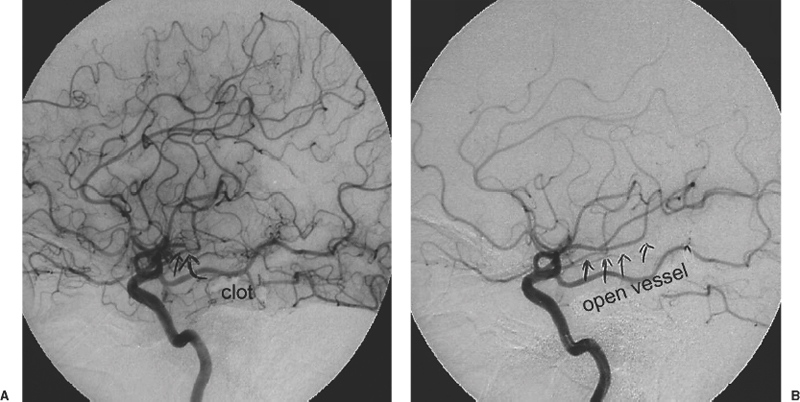 
Only gold members can continue reading. Log In or Register to continue