Acute hydrocephalus is a condition that all neurosurgeons will encounter during the course of their careers. The causes of acute hydrocephalus are varied and can include infection, subarachnoid hemorrhage, intracerebral or intracerebellar hemorrhage with or without intraventricular extension, sudden occlusion of the CSF outflow tracts by tumor or foreign body, occlusive cranial vascular disease, trauma, or intracranial operation. Regardless of the cause, patients can present with rapidly deteriorating neurological conditions requiring urgent attention. Urgent intervention from a neurosurgical perspective for the patient presenting in extremis with a diagnosis of acute hydrocephalus, regardless of cause, is almost always CSF diversion to stabilize the patient and to provide time for further diagnostic studies or therapeutic intervention for the root cause. This chapter will focus on discussion of the methods of CSF diversion in acute hydrocephalus. We will also discuss some of the common causes of acute hydrocephalus. Hydrocephalus due to shunt malfunction will be covered in a different chapter.

Hydrocephalus is the result of a derangement of normal CSF physiology, which causes a pressure gradient to develop across the brain parenchyma from the intraventricular compartment to the extra axial subarachnoid space.1 This pressure gradient causes the ventricles to enlarge, which in turn causes parenchymal compression, compression of the subarachnoid cisterns, and compression of the brain against the skull, which can result in neurologic dysfunction. Long-term processes cause a slow derangement and progressive enlargement of the ventricles which, for a while, is usually well tolerated. Acute changes can be fatal, either from sudden development of hydrocephalus due to an inciting event or acute changes in the setting of chronic hydrocephalus.

The most common cause of acquired (i.e., noncongenital) hydrocephalus is infection. Hydrocephalus as a result of bacterial meningitis usually develops some weeks after initial presentation.2 However, there are reports in the literature of acute hydrocephalus developing within days of presentation.2,3 Parasitic infections such as neurocysticercosis can cause acute hydrocephalus secondary to intraventricular cysts causing obstruction of the CSF outflow tracts.4,5 Cerebellar encephalitis can cause cerebellar edema and rapid obstruction of the CSF outflow through the fourth ventricle.6 Cerebrospinal fluid diversion in the setting of infection can temporize the acute hydrocephalus until antibiotic agents take effect or the inciting inflammatory event subsides.

Mass lesions of the ventricles or pariventricular space (i.e., the foramen of Monro, the pineal region, the cerebral aqueduct, or the fourth ventricle) can all cause acute hydrocephalus or may present with an acute deterioration of a chronic condition.17–19 Colloid cysts of the third ventricle are the most well-known lesions that can cause sudden occlusion at the foramen of Monro leading to sudden death (Fig. 3-2). Cerebrospinal fluid diversion is indicated to temporize the acutely deteriorating patient until surgical intervention can be undertaken.19 Clinically stable patients with fourth ventricular tumors, especially children, have been shown to do well without preoperative CSF diversion, but instead are controlled with steroid administration until operative intervention is undertaken.20

Other causes of acute hydrocephalus include ischemic stroke, trauma, and development after intracranial operation.21–26 The hydrocephalus develops as a result of mass effect from hemorrhage or edema causing occlusion of the CSF outflow or hemorrhage into the CSF spaces. Rarely, foreign bodies may occlude the CSF outflow tracts.26 Diversion of CSF helps protect from further injury due to increased intracranial pressure while the primary process evolves and normal CSF absorption returns. 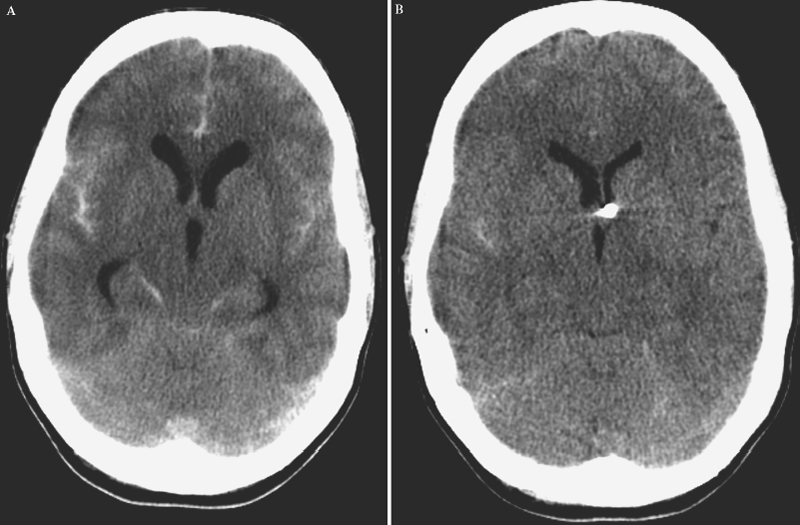 Figure 3-1 (A) Acute hydrocephalus resulting from subarachnoid hemorrhage. Note the rounded appearance of the third ventricle and marked enlargement of the temporal horns. (B) After being treated with ventriculostomy, the ventricles are notably smaller.

External ventricular drainage of CSF for acute hydrocephalus is the most often used technique for CSF diversion. It is rapidly deployable at the bedside, has a low complication rate, allows measurement and treatment of increased intracranial pressure, and can be a lifesaving measure for the patient who presents with a rapidly declining neurological examination secondary to acute hydrocephalus.

Ventriculostomy is not without complication. Infection is the most common complication and has been reported to range from 4% to 20% and is usually due to contamination with normal skin flora.27–31 In addition to infection, hemorrhage associated with passing of the ventricular catheter can be up to 7%, but symptomatic hemorrhage rates are <1%.32 In addition, ventricular catheters can be clogged by blood products which may require catheter revision, and there is a risk of poor positioning given the “blind” nature of the placement procedure.27 In patients with subarachnoid hemorrhage, ventriculostomy, coupled with early aneurysm surgery, has not been shown to increase the risk of rebleeding,33 but poor-grade patients have a high risk of rebleeding after ventriculostomy.34

Lateral ventriculostomy may be accomplished using various methods. Regardless of the method chosen, one must be certain that no coagulopathy is present and adequate platelet number and function exist. Any coagulopathy needs to be corrected and we recommend a platelet count greater than one hundred thousand to reduce the risk of hemorrhagic complication. In this era of antiplatelet medications that do not alter the “standard” tests for coagulopathy, a careful history must be obtained and the risk of conservative treatment must be weighed against the potential catastrophic consequences of passing a catheter in the presence of platelet dysfunction.

A CT or an MRI scan confirms the diagnosis of hydrocephalus. The scan also allows the surgeon to plan the treatment. To ensure successful cannulation of the ventricle and minimize complications, careful scrutiny of the CTscan, especially in the face of shifted ventricular structures, and correlation of the ventricular position with other landmarks can be an invaluable aid. 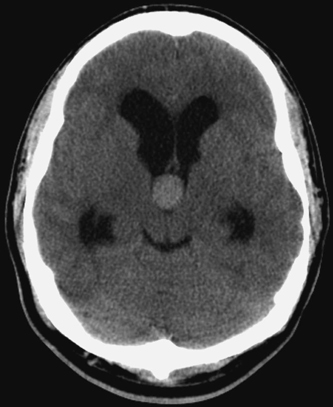 Figure 3-2 Colloid cyst of the third ventricle and associated acute hydrocephalus. Note the colloid cyst is occluding the foramen of Monro bilaterally.

Usually the nondominant side is chosen for the placement of a ventricular catheter. However, in the setting of intraventricular hemorrhage, we choose the lateral ventricle with the least blood to avoid rapid clogging of the catheter. In the presence of aneurysmal subarachnoid hemorrhage, an angiogram can give a priori knowledge of the aneurysm location and its feeding vessels that can help place the ventriculostomy in a position that does not interfere with surgical intervention.

Our method for lateral ventricular puncture is to localize an entry point by using a point 1 cm anterior to the coronal suture in the mid-pupilary line. A small incision is then fashioned at the entry point and is carried down to the skull, usually utilizing a number 15 blade. After completing the incision, the periosteum is scraped from the skull, using the knife blade. A twist drill can then be used to perforate the skull, keeping in mind the eventual trajectory of the ventricular catheter and using this to guide the trajectory of the drill. After this, the dura may be opened, using either an 18-gauge needle or a number 11 blade through the craniostomy. The ventricular catheter can then be passed using a stylet in a trajectory that is orthogonal to the skull in all planes. This method should cannulate the frontal horn of the lateral ventricle at a depth of 5 to 7 cm. As the catheter enters the ventricle through the ependyma, an abrupt decrease in resistance is felt and CSF should fill the catheter. The stylet is then removed and the catheter is tunneled subcutaneously and brought out at a site distant from the entry point, and the incision is closed with a nonabsorbable monofilament suture. 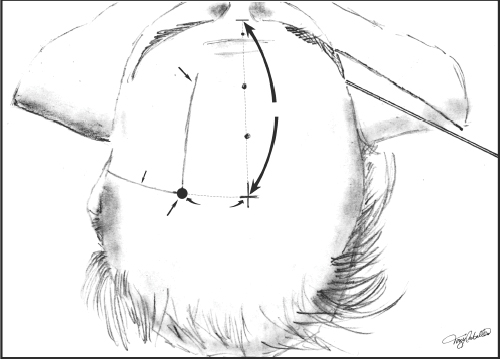