In the emergency room, each patient with a suspected shunt malfunction undergoes a quick physical and neurological exam, including vital signs, and is immediately scheduled for a noncontrast head computed tomographic (CT) scan and a shunt series (a series of radiographs that follow the course of the shunt from the head to its distal location). A neurosurgical consult is often obtained while the child undergoes these studies.

Common complaints related to shunt malfunction include nausea, vomiting, seizures, visual changes, malaise, or altered level of consciousness and depend upon factors such as age of the patient, severity of shunt malfunction, and etiology of hydrocephalus. Family members are particularly sensitive to symptoms of shunt malfunction. Statements such as “this is what happens when his/her shunt malfunctions” or “this same thing happened before his/her last shunt revision,” are often highly prognostic.

The physical examination includes vital signs, which may demonstrate bradycardia or abnormalities in blood pressure and respiratory rate in severe cases. Other aspects of the physical exam include palpation of the shunt along its entire course. Fluid collections around the valve or ventricular insertion site often herald a shunt obstruction, as do abdominal ascites. Occasionally, disconnections can also be palpated on physical exam. Fontanelles, if present, can be palpated to estimate intracranial pressure (ICP).

During the neurological examination, a funduscopic examination should be attempted to assess for papilledema. Cranial nerve examination can sometimes detect abnormalities such as abducens nerve paresis or upgaze palsy seen with hydrocephalus and increased ICP. Other neurological signs, such as ataxia, may also be indicators of shunt malfunction.

Although many do not believe that shunt pumping is useful in assessing shunt function,5 we believe that pumping the shunt can, in certain cases, indicate shunt malfunction, particularly if the patient is well known to the practitioner. We advocate, however, performing shunt pumping only after a CT scan has demonstrated the presence of hydrocephalus and adequate location of the proximal catheter, because of the potential for obstructing a functional shunt with shunt pumping in a patient with very small ventricles or a malpositioned ventricular catheter. Furthermore, the results obtained from shunt pumping should never be used to definitively rule out a possible shunt malfunction.

Imaging studies are often essential for diagnosis of shunt malfunction. As mentioned previously, most patients who present to the emergency room undergo both an x-ray shunt series and a head CT.

Plain radiographs can be obtained easily and efficiently. A plain radiograph shunt series allows for the determination of the type of shunt system in place, including the valve, valve setting (if programmable), and general location of the catheters. A shunt series may also demonstrate disconnections, breaks, or kinks in the shunt system, which may lead directly to shunt malfunction.

Most patients with a suspected shunt malfunction will also undergo a head CT to determine the shape and size of the ventricular system. Shunt malfunction with gross ventriculomegaly can sometimes be diagnosed simply with a head CT. However, in most cases, the CT results are compared with scans that have been performed previously. Before images could be stored and recorded electronically within patient records, we asked all patients and parents to hold on to copies of old head CT scans and other imaging studies and to bring these copies with them to any emergency room or clinic visit. Comparison of head CT scans to prior scans greatly improves the accuracy of interpretation of current studies and aids in the diagnosis of a shunt malfunction. Any increase in the size or change in the shape of the ventricular system from a baseline exam is often sufficient for the diagnosis of a shunt malfunction.

Additional complications that can be observed with a head CT include overdrainage, subdural collections, malpo-sitioning of the proximal catheter, and slit ventricle syndrome. Occasionally, shunt malfunction may exist despite the presence of small ventricles. In a certain number of patients, ventricular compliance is altered sufficiently, such that increased ICP and shunt obstruction can exist without the presence of gross ventriculomegaly or any change in ventricular size.

Radionuclide studies can be performed to locate the presence of a shunt obstruction but are rarely indicated in the acute setting. Similarly, MRI is rarely necessary in the acute setting. In certain cases, when distal malfunction is suspected, abdominal CT is performed to demonstrate abdominal pseudocyst, ascites, visceral perforation, or malpo-sitioning of the distal catheter. Ultrasound may be used in infants with a patent fontanelle and also to determine the presence of abdominal collections such as pseudocysts.

A shunt tap can be performed quickly at the bedside with minimal complications.6 Shunt taps can be both diagnostic and therapeutic. For most shunt taps we use a 23- or 25-gauge butterfly needle attached to a 25-cm piece of tubing. The area is prepped with Betadine (Purdue Pharma L.P., Stamford, CT) and the shunt bulb is entered at a steep angle under sterile conditions. With the needle in place, the tubing is extended upward to act as a manometer to estimate the ICP based upon the flow of cerebrospinal fluid (CSF) into the tubing. If CSF overflows out the distal end of the tubing then the ICP is estimated to be greater than 25 cm H2O, suggesting increased ICPs. The end of the butterfly tubing can then be placed below the level of the shunt valve to assess for proximal flow. Sood et al have shown that assessing the “drip interval” with this method was very effective for diagnosis of proximal shunt malfunction.7

If there is no immediate return of fluid then a small 3 mL syringe is connected to the tubing. Attempts are made at aspirating CSF from the valve and the foregoing procedure for estimation of ICP is repeated. Inability to aspirate CSF is often a sign of proximal malfunction. Distal malfunction can sometimes be diagnosed by manually occluding the inlet portion of the valve and allowing the fluid column in the tubing to flow distally. Slow or absent distal flow can be an indicator of distal malfunction. CSF obtained from the shunt tap is always sent to the laboratory for cell count, Gram stain, aerobic cultures, glucose, and protein.

There are three main causes of acute shunt malfunction: (1) obstruction of the proximal/ventricular catheter; (2) obstruction distal to the proximal catheter, including the valve and peritoneal/atrial/pleural catheter; and (3) disconnection, breakage, or migration of any component of the shunt system. Each of these etiologies requires a unique management algorithm.

Obstruction of the proximal catheter is the most common cause of acute shunt malfunction. Debris or the choroid plexus can often occlude the entry sites in the proximal catheter leading to the obstruction of CSF drainage. Proximal obstruction can sometimes be diagnosed solely by clinical exam when a fluid collection is palpated over the cranial burr hole. Most often, however, diagnosis requires analysis of imaging studies and results from a shunt tap. Occasionally, the diagnosis is not made until intraoperative interrogation of the shunt system is performed.

Removal of the proximal catheter is often difficult in cases of delayed shunt malfunction due to the presence of adhesions and gliosis around the catheter. Gentle traction combined with cauterization of surface scar tissue is often sufficient to release the catheter. In rare cases, a ventricular catheter stylet is placed down the proximal catheter and low intermittent monopolar cautery is applied.

Cannulation of the ventricle can also prove to be difficult in some cases. For most cases of proximal shunt obstruction, where catheter position is appropriate, we prefer to “soft-pass” a catheter down the original shunt tract. While an assistant removes the proximal catheter, the surgeon places a new catheter, with the stylet pulled back a few centimeters, through the hole in the cortex to the appropriate depth or until CSF emanates from the new catheter. In cases where a new position for the proximal catheter is sought, the original burr hole should be enlarged and surface scar tissue should be removed before placing the new ventricular catheter. Additionally, the trajectory of the existing proximal catheter can be used as a guide for the new trajectory. After CSF flow is confirmed from the new proximal catheter and before reattaching the proximal catheter to the valve, the patency of the distal catheter can be assessed with a blunt needle and manometer filled with saline.

Postoperatively, patients are observed overnight and often sent home the following day. Postoperative imaging can be performed to confirm placement of the ventricular catheter and resolution of ventriculomegaly. In most cases, however, resolution of clinical symptoms and signs is a reliable indicator of the reconstitution of shunt function.

Distal obstruction can occur at the level of the shunt valve or distal catheter. Debris can clog the valve, causing it to malfunction. Similarly the distal catheter can become occluded by debris, contents of the abdominal cavity, or even blood clot, in the case of atrial catheters.

Less commonly, kinking of the distal catheter at its connection to the valve or entry site in the abdomen or chest can be the cause of distal obstruction and shunt malfunction. The “kink” is usually easily identified with the x-ray shunt series. In certain cases, abdominal CT is utilized to confirm distal malfunction due to poor CSF absorption or malpositioning of the catheter.

Distal obstruction, however, is most often confirmed by the presence of ventriculomegaly on CT and the presence of proximal CSF flow with a shunt tap. Because CSF is often accessible with a shunt tap, the management of patients with a distal obstruction can proceed in a less emergent fashion than is the case with a proximal obstruction. Following a large-volume shunt tap to normalize ICPs, patients can be monitored closely while studies are performed and preparations are made for the operating room. In complex cases, serial shunt taps for removal of CSF can even be performed while appropriate arrangements are made for a definitive procedure.

Prior to closure, the proximal catheter should always be interrogated because often a concomitant partial proximal obstruction may exist with the distal obstruction. In uncomplicated revisions, patients are monitored for 24 hours and then sent home. Postoperative imaging is advisable but by no means necessary.

Disconnections, fractures, and migrations of the proximal or distal shunt catheters can sometimes be detected on physical exam but most often are diagnosed based upon careful inspection of plain radiographs. Disconnections can occur at either the proximal catheter-valve connection or the distal catheter-valve connection (Fig. 29-1). These may result from poorly assembled connections between the valve and catheters or due to excessive tension on one of the components of the shunt system. Intraoperative repair of disconnections should specifically address both of these issues.

Fracture of the shunt catheter or valve can result acutely from local trauma or more often as a late complication of repeated biomechanical stress along with calcification and aging of the shunt components. Fractures often occur at sites where the shunt is in close contact with bony surfaces such as the clavicle or rib cage. The treatment of a fractured shunt catheter or valve is removal of the fractured pieces and replacement.

Migrations of both the proximal and the distal catheter can occur. Migration of the proximal catheter often results in shunt obstruction by occlusion of the inlet ports with brain tissue. Distal migrations are more commonly encountered and have been described as occurring in a variety of locations, particularly with ventriculoperitoneal shunts.8–13 Treatment of catheter migration requires replacement and, if possible, retrieval of the migrated fragment. 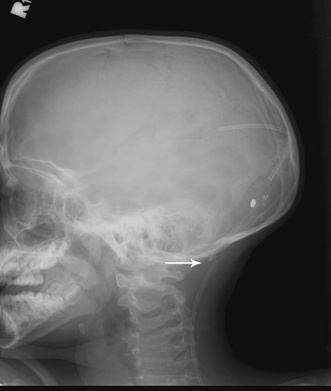