Painful Enlargement of the Lumbosacral Plexus—Prostate Cancer with Perineural Spread

Figure 14-1 A, Paracoronal magnetic resonance imaging (MRI) scan directs the targeted nerve biopsy by showing the enlarged left S2 and S3 nerve roots with expanded foramina (arrows). Note the increased signal in the left gluteal muscles due to denervation (asterisk). B, Postcontrast images show the heterogenous enhancement of the S2 and S3 nerve roots. C, Another MRI image shows the abnormal sciatic nerve (arrow) within and distal to the sciatic notch compared with the normal right side. 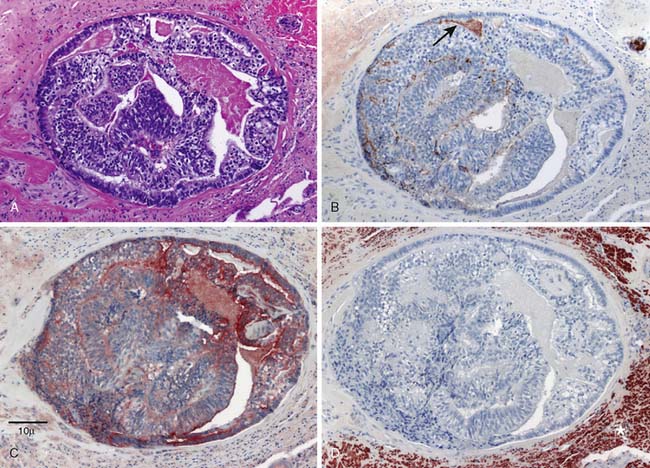 Neoplastic lumbosacral radiculoplexopathy (NLRP) is a syndrome in which infiltration of cancer into the lumbosacral plexus causes lower extremity weakness and sensory abnormalities. It most commonly results from spread of local intra-abdominal disease into the plexus, whether from the primary tumor or adjacent metastatic foci.2 Colorectal cancer is the most common cause of NLRP, but prostate cancer, bladder cancer, lymphoma, and cervical cancer are also known causes.3 Severe, unrelenting pain is always an early and persistent symptom. The pain is neuropathic with deep aching, allodynic and radicular qualities. The symptoms are often mistaken for lumbosacral disk disease. Neurologic signs soon follow and are unilateral in most cases. Work-up always reveals radiographic evidence of intra-abdominal or intrapelvic metastases and electrophysiologic evidence of a severe, axonal, unilateral lumbosacral plexopathy.2 MRI is probably the most sensitive imaging modality to detect the cancer.3 Elevated levels of PSA, carcinoembryonic antigen (CEA), or cancer antigen 125 (CA-125) are often found.

Perineural spread is an unusual mode of cancer spread that involves growth of the cancer cells along the length of a nerve within the confines of the perineurium. It is known to occur in head and neck cancers such as squamous cell carcinoma and malignant melanoma. Perineural spread is not seen in most cases of NLRP, but rarely can occur in prostate cancer and may, in fact, be the earliest route of extraprostatic spread on a microscopic level. One study by Villers and colleagues found that of 78 radical prostatectomy specimens with penetration of the capsule by tumor, 38 had penetration solely through prostatic nerve twigs (perineural spread).4 Tumor infiltration extended along the extracapsular nerves for distances of between 3 and 9 mm. Because sensory afferent fibers of the prostatic nerves travel through the pelvic plexus to the S2-S4 roots, longstanding cases of prostate cancer allow tumor to grow longer distances by using these prostatic nerves as a conduit. Over time, the tumor is able to infiltrate the lumbosacral plexus, the sacral nerve roots, and even, by anterograde extension, the sciatic nerve. It is now clear that perineural spread in prostate cancer specimens increases the risk of recurrence after surgical treatment and may warrant more aggressive therapy than has previously been employed.5,6

It is important for the neurologist to remember that this unique pathologic mechanism can make accurate diagnosis difficult. Although the initial clinical presentation of prostate cancer with perineural spread is typical of the other NLRPs, radiographic evidence of neoplasm as the etiology is often absent. The nerves or nerve roots are enlarged and enhance with contrast, but without evidence of neoplasm in adjacent tissues, these findings are nonspecific and are also seen in other disorders such as chronic inflammatory demyelinating polyneuropathy, sarcoidosis, perineurioma, or neurofibromatosis. In addition, serologic markers such as PSA, cancer antigen 125 (CA-125), or carcinoembryonic antigen may be normal. Thus, a pathologic specimen may be the only way to conclusively diagnose prostate cancer that has infiltrated the lumbosacral plexus by perineural spread. Fascicular nerve biopsy from a site of MRI abnormality may provide this pathologic diagnosis and, therefore, direct appropriate treatment.

It is unclear how or why prostatic cancer travels along nerve. Several mechanisms have been explored. Prostatic neoplastic cells may express nerve growth factor receptors, thereby enhancing cellular proliferation within the endoneurial environment.7 Neural cell adhesion molecules may also play a role by allowing for improved penetration into tissue in the presence of nerve.8 Expression of cyclin D1, which promotes mitosis and cell division, is up-regulated in most types of cancer cells that use perineural spread, but why cyclin D1 promotes growth within the nerve is not known.9 Finally, nuclear factor-κB (NF-κB), which has an antiapoptotic function, is expressed in perineural prostate cancer cells and provides the cells with a growth and survival advantage.10 In the future, these mechanisms will play a role in developing adjunctive therapies to treat prostate cancer.