A right brachial plexus (medial cord) fascicular biopsy was performed. Two fascicles were obtained, each of which showed a focal area of centrally reduced myelinated fiber density; some of the fibers in these areas showed abnormally thin myelin, and regenerating clusters were present. Electron micrographs of the affected areas revealed onion bulb formations (Fig. 7-2). In addition, there were individual endoneurial inflammatory cells. Teased fiber evaluation showed 5% segmental remyelination, which is within normal limits. The patient was diagnosed as having multifocal CIDP, and treated with intravenous immunoglobulin (IVIg), which halted the progression of her symptoms. When IVIg was decreased from once every 2 weeks to once monthly, the patient had significant worsening of leg weakness. Her symptoms improved back to her baseline, with stabilization when the IVIg was again increased to every 2 weeks. On this treatment, she has remained stable for the past 6 months. 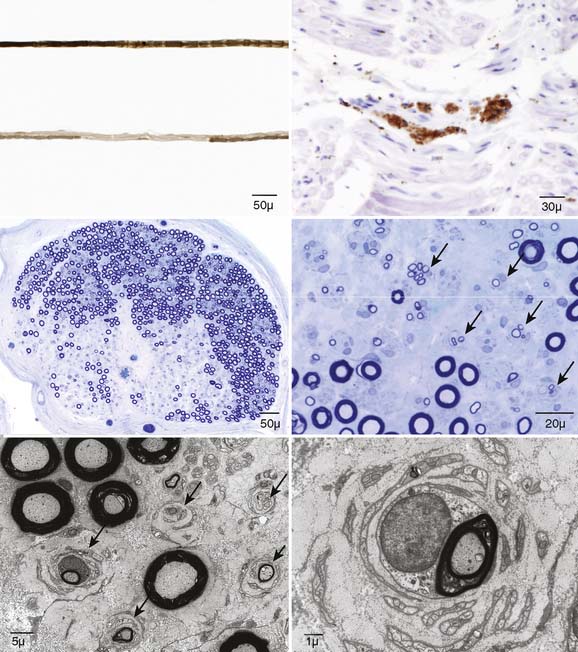 A 46-year-old dextral man presented with a 6-year history of slowly progressive painless weakness and wasting of the intrinsic muscles of the right hand and a 1-year history of painless progressive weakness and wasting of the left hand, left biceps, and left brachioradialis muscles. He reported no sensory changes, no bladder or bowel involvement, and no cranial nerve symptoms. Occasional cramps were noted in both hands. There was no family history of neurologic disease. NCS revealed absent right median and ulnar motor responses with normal sensory nerve studies in the same nerves across the same segments. On the left side, there was a definite conduction block in the left median nerve 4 to 5 cm proximal to the wrist crease, and a probable conduction block in the left radial nerve between the axilla and the elbow. All sensory studies in the left arm were normal. Motor and sensory studies of both lower extremities were normal. Needle electromyographic examination revealed widespread partial active denervation and regeneration of C6 to C8 segmental muscles on the right and to a lesser extent on the left. Laboratory investigations revealed high titer immunoglobulin M antibodies to ganglioside epitopes GM1 and asialo GM1. Other routine laboratory investigations as per Case A were normal. CSF evaluation was entirely normal.

He underwent bilateral fascicular median nerve biopsies in the forearm using intraoperative NCS of select fascicles demonstrating conduction block. Postoperatively, there was no change in his upper limb neurologic status. The right median biopsy contained two fascicles, and the left biopsy contained two to four fascicles. Multiple level teased fiber examinations of the biopsies revealed a slightly increased rate of axonal degeneration (left 5%, right 8%). Both biopsies on light microscopy revealed no evidence of demyelination or inflammation, and staining for amyloid was negative. Light microscopy revealed a mildly increased number of degenerating profiles on both biopsies, worse on the right, decreased fiber density on the right, and prominent regenerative clusters on the left. These findings were confirmed on computerized nerve morphometry (Fig. 7-3). These findings are consistent with those reported in MMN and are interesting in that they reflect the clinical condition well; as there is a clear difference between the sides with the more recently affected side (left) showing far less involvement and significantly more evidence of nerve regeneration. Whereas on the right, there is severe clinical disease, some decrease in fiber density with selective loss of large fibers, an increased rate of axonal degeneration, but little evidence for regeneration. 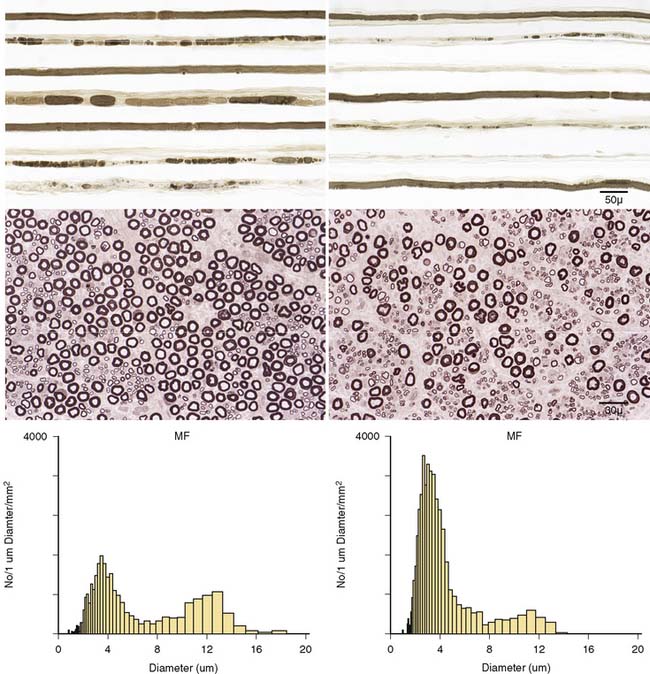