In the past, treatment of spasticity has ranged from conservative elimination of nociceptive stimuli, rehabilitative therapy, splints, and casts, to more invasive surgical techniques including orthopedic tendon lengthening, or sectioning, neurosurgical rhizotomy, especially selective dorsal rhizotomy, and intrathecal baclofen infusion therapy. The mainstay of medicinal treatment has been enteral therapy with dantrolene, baclofen, and/or benzodiazepines. The main problem with this treatment methodology is that oral medications are only mildly effective and have to be given at doses that are frequently not tolerated by patients because of unwanted side effects, including somnolence, confusion, ataxia, urinary frequency, headache, insomnia, and the like.1

Baclofen has been the drug of choice with IDDSs in severely spastic patients. Baclofen, a structural analog of the inhibitory neurotransmitter gamma aminobutyric acid (GABA), relieves spasticity by activating G-protein-linked presynaptic GABAB receptors that hyperpolarize Ia muscle spindle afferent neurons.3 This reduces the number and amplitude of excitatory postsynaptic potentials at the dendrites of the α-motor neurons.3 Because of baclofen’s poor lipid solubility and restricted penetration of the blood-brain barrier with oral dosing, delivering this drug intrathecally allows patients to receive maximum treatment at dramatically lower doses than enteral therapy.4

The main product on the market for intrathecal delivery is accomplished by the SynchroMed EL Infusion System (Medtronic, Inc., Minneapolis, MN), which consists of a small titanium disk, measuring approximately 3 in. in diameter and 1 in. thick (nearly hockey puck shaped), along with a flexible silicone catheter that serves as the pathway through which baclofen flows to the intrathecal space.5 Within the disk is a refillable reservoir for the liquid baclofen from which a programmable, battery-operated pump propels the baclofen into the catheter. The reservoir is filled through a reservoir access port, located centrally in the disk, and there is also a catheter access port, from which solution can be injected directly into the catheter, bypassing the pump. The disk is placed in either a subcutaneous or, as the senior author (PF) prefers, a subfascial pocket, generally waistline in the anterior abdomen wall (bordered by the iliac crest inferolaterally, the umbilicus medially, and the costal margin superiorly), and the catheter wraps around distally to the spine via a subcutaneous path. The pump also contains a programmable alarm that sounds when the reservoir needs to be refilled, the battery is low, or the pump is not delivering the baclofen.

The safety and efficacy of intrathecal baclofen therapy ITB therapy has been analyzed in many patient studies,5,6 and the dramatic decrease in spasticity and pain secondary to it far outweighs the relatively low drug-related and system-related complications. However, in rare circumstances, neurosurgical emergencies arise with ITB therapy when these pumps fail after chronic therapy, and patients go into a baclofen withdrawal syndrome, which has led to death in some reported cases.7 This chapter focuses on recognizing the clinical downward spiral of a patient in baclofen withdrawal, immediate and long-term management of this withdrawal, and troubleshooting problems with ITB pumps before they occur.

In patients with long-term ITB infusion, there is downregulation of GABAB receptors in the central nervous system (CNS) and spinal cord secondary to their chronic stimulation by the infused baclofen, which incidentally can account for a decreased sensitivity to baclofen over time.8 This downregulation, along with baclofen’s intrinsic inhibitory tone on the CNS and spinal cord, create CNS hyperexcitability and severe spasticity when ITB therapy is abruptly withdrawn. The sudden depletion of baclofen results in predominance of excitatory effects. These effects can result clinically in a reappearance of baseline spasticity associated with neuropsychiatric symptoms such as pruritis, anxiety, disorientation, diaphoresis, and seizures.9 If the withdrawal is extremely abrupt or the patient’s reaction severe, critical symptoms of a full-blown life-threatening ITB withdrawal syndrome may result, including severe hyperthermia (one report as high as 109.4°F), rhabdomyolysis, disseminated intravascular coagulation, multiorgan failure, cardiac arrest, coma, and death.7,9

The typical patient presents 1 to 3 days after abrupt cessation of ITB therapy, sometimes with prodromal itching or paresthesias or priapism in males. Seizures or rebound spasticity may also be the presenting symptoms. Patients may have a new-onset dysphoria or malaise that evolves to a decreased level of consciousness. Patients with injuries at T-6 thoracic-6 or above have an increased risk of severe sequelae because of their limited ability to detect or communicate prodromal symptoms.10 Patients may go into respiratory distress because of incomplete adduction, adductor spasm, and adductor tremor of the vocal cords.3 It is important to evaluate recent drug dosing and refill histories. Particularly pertinent are recent increases in ITB dosing due to an unexplained new onset of drug tolerance and increased spasticity. Although decreased sensitivity to baclofen does occur over time, an exponential increase in dosage over a short interval may also signify decreased delivery of baclofen due to IDDS or ITB malfunction. Monitoring of creatine kinase levels and their subsequent rise during early symptoms of withdrawal has also been suggested as a marker to follow the severity of withdrawal.11

It is difficult to know the exact frequency and natural progression of such withdrawal syndromes from ITB therapy, particularly given that the true incidence of withdrawal is underreported and the reported cases are likely biased toward the more severe.9 Because all patients receiving ITB therapy are potentially at risk for withdrawal, a high index of suspicion for malfunction and subsequent withdrawal must be kept in patients presenting with any of the changes noted here, particularly if this represents a change from a stable chronic baseline.9

Although similar in presentation, the ITB withdrawal syndrome is clinically and pathophysiologically distinct from autonomic dysreflexia, malignant hyperthermia, and neuroleptic-malignant syndrome. ITB withdrawal must be differentiated from these syndromes because their treatments differ. Autonomic dysreflexia arises from a disconnection of major splanchnic sympathetic outflow from supraspinal control; malignant hyperthermia from a mutation or change in ryanodine-sensitive receptors causing a leakage of calcium into the cytosol from the sarcoplasmic reticulum; and neuroleptic-malignant syndrome from an acute loss of hypothalamic dopaminergic transmission.7

The most common ITB therapy complications are related to the catheter (i.e., spontaneous extrusion of catheter from the spinal canal), along with kinks, holes, breaks, or disconnections of the catheter,8,9,12,13 and these complications may occur in up to 40% of patients receiving ITB therapy14 (Fig. 31-1). Catheter dislodgment or malfunction can happen any time after implantation of the pump.

We utilize a systematic approach to find the cause of the ITB pump malfunction. To access the pump and catheter system, begin systematically by checking the programming and filling status of the pump with the ITB telemetry wand to look for incorrect programming or a depleted reservoir. If these systems are fine, perform biplanar x-ray images to examine catheter placement and look for possible dislodgment, disconnection, kinking, or rupture of the catheter. Unfortunately holes or small kinks may be overlooked in the films. Next, program a 90-degree movement of the pump rotor, with x-ray films before and after the pump movement to confirm actual rotor movement, or as we commonly do, perform the test under fluoroscopy and visualize real-time movement of the rotor. This will access adequacy of the pump function. If still no failure has been established, program the pump to give a bolus dose of 50 or 100 μg to determine if there is a pump-system malfunction. Additionally, access the programmable chip to determine the volume of baclofen that should exist and then aspirate and measure the pump’s actual volume for comparison.9 If the pump system appears to be functional by all of these tests, inject a bolus of baclofen via lumbar puncture and if there is obvious clinical improvement in spasticity within 30 minutes to an hour, then there is an established, although unidentified, breakdown in the ITB infusion system. Continue your inspection by injecting 5 mL of radiopaque solution through the catheter access port to ascertain if there is leakage of the catheter or if the solution even arrives in the subarachnoid space. When injecting through the catheter access port, small holes in the catheter may be missed due to the relative high-pressure delivery of the bolus, or a leak in the catheter may be position dependent. If the cause of malfunction is still not found after these tests, fill the drug reservoir with radionuclide solution and deliver the solution over 24 hours. Small holes or position-dependent leaks in the catheter system may then be demonstrated due to the lower pressure inside the catheter during the 24-hour study.13 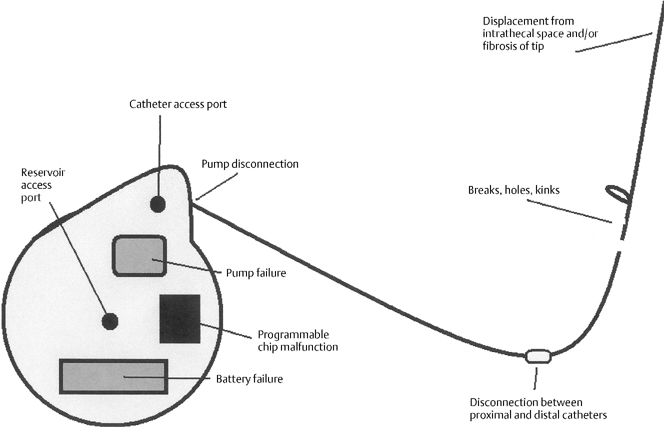